Foundations of the terminal were deemed complete by July 1991. In the meantime, construction of trainshed roof components was taking place in Wetherby, West Yorkshire, by appointed manufacturers ‘’Westbury Tubular Structures Ltd’’. Assembly of the metal framework was subcontracted to ‘’Bovis Construction Ltd’’, and the trainshed was to be clad with 20,000 square metres of glass.

The international station was formally completed on 17th May 1993, but international passenger services did not commence operation until 14th November 1994. The building cost of the station had since risen to £130 million and when ''Eurostar'' services first began, the station accounted for just eight pathways in and out of Waterloo station as a whole, split between trains to and from Paris and Brussels - this later rocketed to fifty international pathways to and from the terminus. The international station was subsequently transferred to London & Continental Railways in 1996 during privatisation, with a book value of £136 million; the domestic station had become part of Railtrack on 1st April 1994, the latter organisation being floated on the London Stock Exchange on 20th May 1996.

With the confirmed relocation of international trains to north of the Thames, at St Pancras, consideration was at first given to keeping the present Waterloo International station active, operating approximately a third of Eurostar trains out of there. However, the cost of maintaining two station hubs was deemed too great, and Waterloo was scheduled to cease serving Eurostar services on 13th November 2007. It was announced that the station would transfer from London & Continental Railways to Government ownership, in exchange for the new maintenance depot at Temple Mills. Since the initial announcement outlining the closure of Waterloo International, two schemes in particular came to the forefront of deciding what to do with the structure: that of either converting it into a shopping centre, or allowing domestic services to make use of much needed platform capacity. The latter option was eventually settled on.

In November 2007, the Government confirmed that it would be over a year until the first domestic services could use the vacated international station platforms. The works required for the conversion operation were stated at the time to be extensive, and included the demolition of the Nine Elms Flyover, which linked the station with the ''Chatham'' main line. A Department for Transport report concluded that sufficient capacity to run scheduled services over this connection was not available, since the double-track viaduct could only accommodate an absolute maximum of eight trains every hour. The lengthy station platforms also required heightening, since they had been constructed to the lower European profile.

Eurostar gutted much of the security equipment from Waterloo International for reuse at Ebbsfleet International, the latter being scheduled to open five days later than the rest of the CTRL's ''Section 2''. The ''domestication'' of Waterloo International formed part of a three-stage strategy created by Network Rail, involving a comprehensive redevelopment of the whole Waterloo station site. The project was enshrined within the infrastructure company's business plan stretching between 2009 and 2014, and at that time included moving the entire station concourse down to a lower level, to link in with a new City Square development planned around the adjacent Waterloo Road.

Limited domestic services using the former international site were originally scheduled to commence in December 2008, at the start of the National Winter Timetable. It was envisaged that only platform 20 would be in use by this time; since it was effectively the other half of domestic platform 19, it could easily be accessed from the main concourse. Conversely, platforms 21 to 24 could only be reached by means of the ''low-level'' international concourse, via escalators and lifts, thus required greater modification to make them available.

South West Trains ran the first test train into platform 20 of the former international station on 4th June 2008, marking the start of driver training. In spite of this, no regular services were forthcoming, but a special one-off service from Woking was routed into platform 20 on Monday 29th April 2013, to indicate the intention of using the defunct terminal for domestic trains. This was followed on 22nd October of the following year by the start of limited services using platform 22, access to this part of the station having been afforded by the construction of a flight of stairs over the "low-level" concourse. 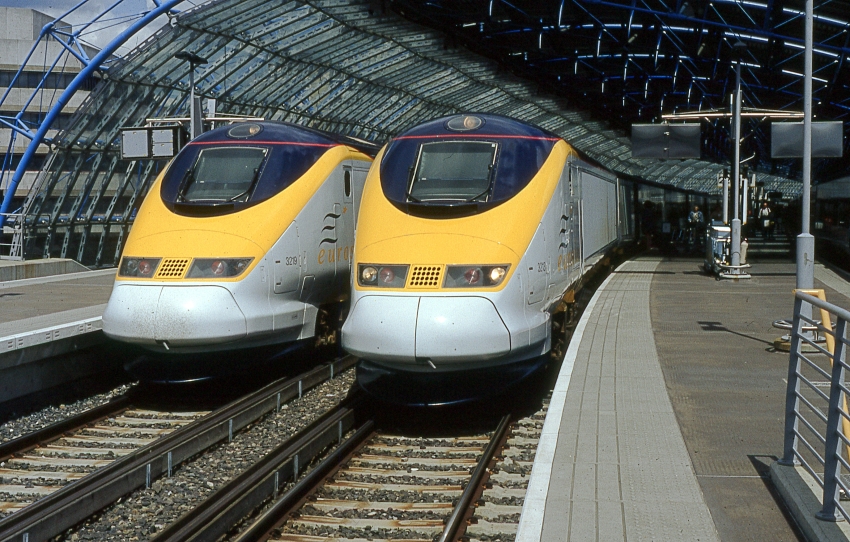 Two SNCF-owned Class 373 sets are in evidence: Nos. 3219 and 3213 are on the left and right respectively. No. 3219 has been refurbished and repainted into the latest blue and grey scheme. By comparison, No. 3213 has become part of the "Izy" train fleet, which forms a low cost service between Paris and Brussels. "Izy" is a brand owned by "Thalys" © David Glasspool Collection 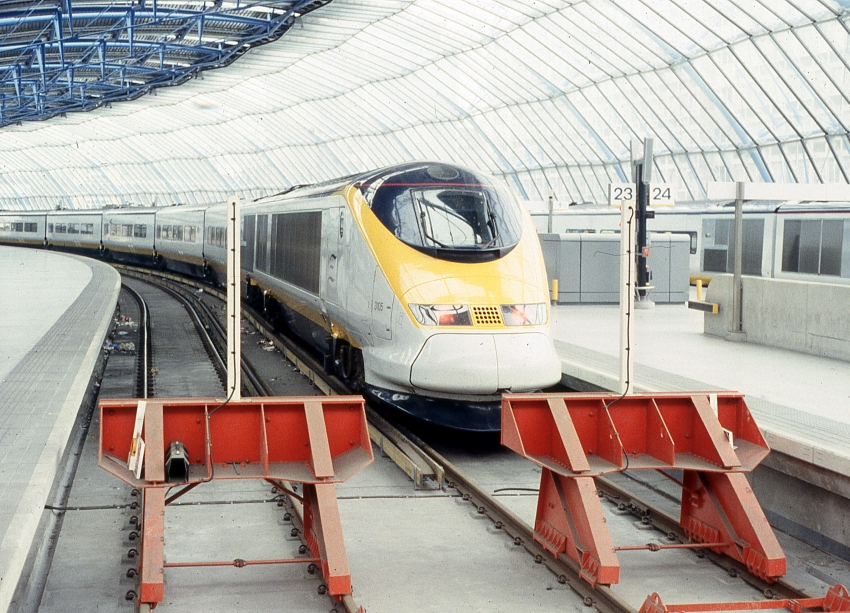 Class 373 No. 3105 is seen at the buffer stops of platform No. 23. The power cars of "half sets" Nos. 3105 and 3106 arrived at Dover on the train ferry from Calais on 9th February 1994. They were the first Class 373 power cars to be moved by rail from Dover to the GEC factory at Washwood Heath, Birmingham. © David Glasspool Collection 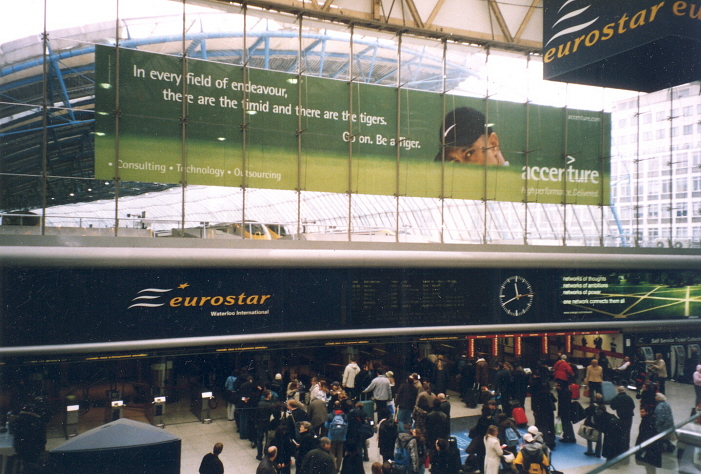 Since the earlier 1995 view, a large advertisement had appeared on the glazed partition between the concourse and the curved trainshed. The crowds were sizeable, but all is quiet today © David Glasspool 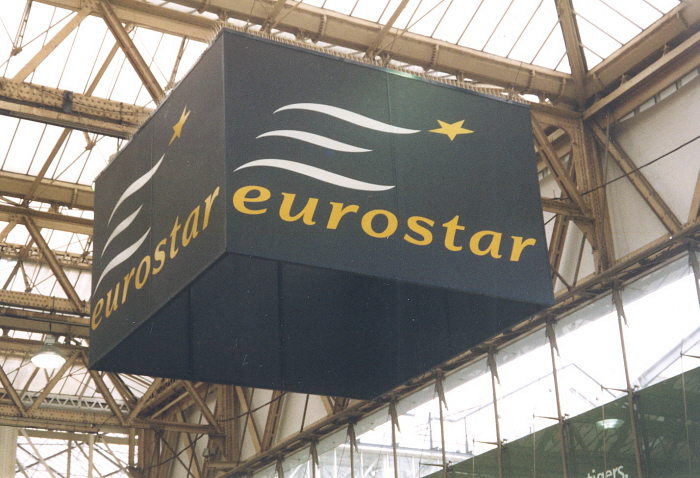 A large canvas cuboid-shaped banner was once in evidence above the lower concourse area, suspended from a roof in desperate need of restoration. © David Glasspool