This became a large class of multiple units, which worked on all Divisions of the Southern Region. The first examples were procured as part of the September 1964-authorised Bournemouth electrification, to take over from steam traction on semi-fast services from Waterloo. The Southern Region opted to follow the 1951-introduced BR Mk 1 profile for the then new units, for it was considered economical to follow the design of the contemporary 4-CEP/4-BEP and 4-CIG/4-BIG stock, first introduced in 1956 and 1963 respectively. For the record, the final locomotive-hauled BR Mk 1 passenger carriages were built at Derby in 1964, and thereafter, other BR Regions had adopted the BR Mk 2 design. Eastleigh had ceased carriage building in 1963, thus assembly of the first batch of new EMUs, which numbered twenty, was split between works at Derby and York. The units comprised four vehicles in their formation, arranged as follows:

The units were numbered 7701 to 7720 and, as per other BR(S) EMU builds, were gangwayed throughout, featured Pullman rubbing plates, buckeye couplers, and electro-pneumatic brakes. Jumper cables and brake hoses were recessed within the lower cab front, and the type was designated 4-VEP (Vestibuled Electro-Pneumatic). Unlike CEP/CIG fleets, the windows on these units strayed from the typical BR Mk 1 design, being noticeably smaller and more numerous, tailored to the internal suburban seating layout. Power came in the form of four English Electric 507 traction motors, a pair of which were mounted on each Mk 6 motor bogie of the MBSO. Each traction motor was rated at 250 HP, and the EE507 type was standardised across BR(S) EMU and DEMU fleets. A 70-Volt motor-generator was used for lighting, and Driver and Guard remained in contact through both ‘’Loudaphone’’ and Bell Communication. In brief, ‘’Loudaphone’’ was a telephone system which allowed a clear transmission of voice commands, without interference from background noise at each end of the line.


Re-alignment of the tracks between Brookwood and Worting Junction, which were continuously welded during electrification, had permitted top operating speeds of up to 90 MPH, for which the 4-VEP fleet was geared. All twenty 4-VEP units were fitted with the ‘’Westinghouse Automatic Warning System’’, the Waterloo Main Line having been so equipped during electrification works. Full electric working between Waterloo and Bournemouth was scheduled for 10th June 1967, but as a result of slow delivery of new rolling stock, this was put back by exactly one month.

All-over Corporate ‘’Rail Blue’’ livery was applied to the first twenty 4-VEP units, this having become the standard colour scheme for suburban stock. Aluminium casts of BR’s ‘’Arrows of Indecision’’ appeared on the cab sides, below the driver’s window, and numbering and lettering was applied in white. Small yellow warning panels were applied from the outset, within the lower half of the central cab gangway. Inside, the units were fitted with blue and grey plastic panelling, and yellow curtains adorned the windows in First and Second Class sections. The ceilings were crème in colour, and aluminium luggage racks could be found above the backs of the seats.

Brief mention should be made of an almost immediate modification to 4-VEP No. 7711. This unit was experimentally fitted with the ‘’Southern Region Advanced Warning System’’ (SRAWS – later re-named the ‘’Signal Repeating AWS’’), for use between Southampton and Bournemouth. Briefly, this was an adaptation of the standard AWS to better deal with the SR’s intensively-used inner suburban electrified lines, where trains regularly ran with short headways on double-aspect signals. Aspects of the previous and next colour light signals would be displayed in the cab. In 1975, the experiment ended, when it was decreed that AWS on all BR lines should be standardised. 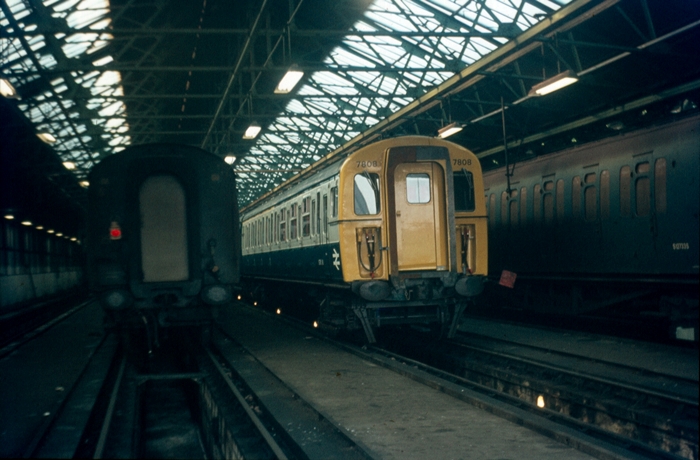 4 VEP No. 7808, the first to wear BR Corporate Blue and Grey livery, is seen stabled within Selhurst Depot, 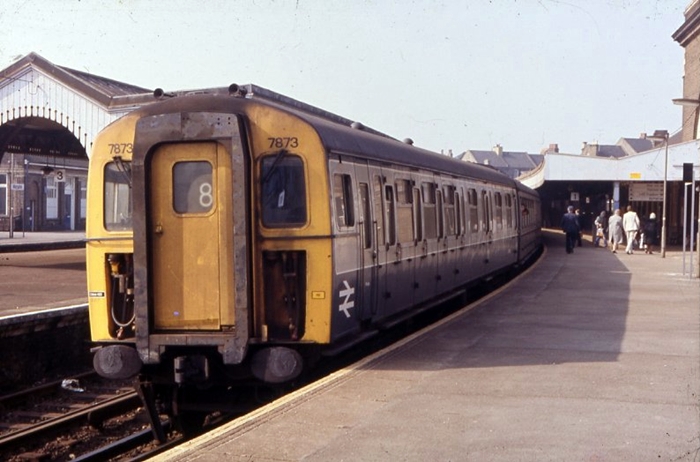 4 VEP No. 7873 is seen at Margate, forming a Holborn Viaduct to Ramsgate service. To the left of the unit can

be seen a canopy of SE&CR origin. © John Horton 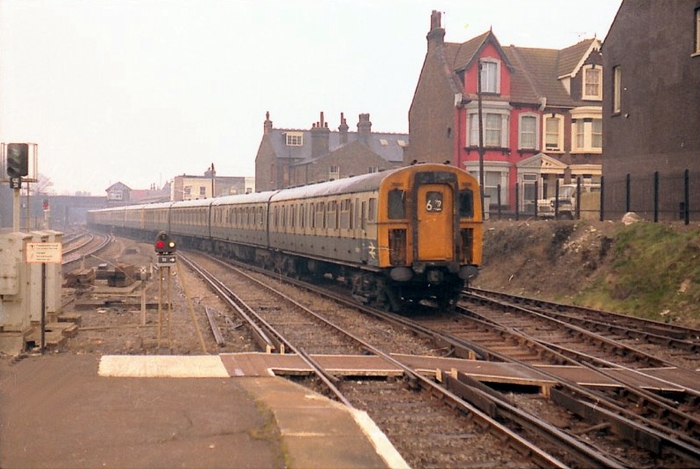 No. 7886 is seen forming the front portion of a twelve vehicle train at Margate, as it approaches with a Charing