Adisham is the epitome of a typical LC&DR intermediate station and opened with this company’s Canterbury to Dover section on 22nd July 1861. It virtually replicated the station that had opened at Sole Street some six months earlier, even down to the modular layout of the main building and the positioning of both goods shed and signal box. The station building, positioned on the ‘’down’’ side, was one of many LC&DR structures which appeared to receive an all-over white paint finish, and such treatment seems to date from the route’s earliest days. The ‘’up’’ side received a very modest timber waiting shelter, not as generous for coverage as that at Sole Street, the former being half the length. Goods provision here was copious, however, and on the ‘’down’’ side, to the south of the main building was provided a customary single-track pitched roof goods shed. Excepting the track it served, it was in the company of three additional sidings, one of which terminated immediately at the southern end of the ‘’down’’ platform – in fact, a chunk of the platform was excluded to accommodate it (see pictures below). Further freight provision was made on the ‘’up’’ side, consisting of a loop behind the platform, this in turn feeding a siding at either end. The goods shed line and the track parallel with it also incorporated a once common feature: wagon turntables.

There were of course later additions to this station, the aforementioned signal box not arriving until about 1878. This was a fairly unusual cabin, being constituted wholly of timber, located at the southern end of the ‘’up’’ platform, and rivalling the station building in height. It was also one of the examples designed and built by the railway company itself, rather than the product of much-used contractor Saxby & Farmer. Of even later origin is the lattice footbridge, this arriving at the site some twelve years after the formation of the SE&CR. The telltale signs of this bridge being a post-1900 structure are the lattice struts: these are positioned wider apart compared to the station footbridges which went up in 1894 (see East Farleigh, for instance). In its earlier years this station was an important and busy location, solely due to the goods traffic handled here, ranging from local farm produce to coal. However, with the systematic opening of Holman Stephens’ East Kent Light Railway from 1912 onwards, its significance on the route was somewhat overshadowed by the sudden burst of activity at Shepherds Well and indeed, the latter became the most important stop between Faversham and Dover – at least for goods. Freight traffic was not officially withdrawn from Adisham until May 1962 and although Shepherds Well’s goods yard ceased to function the year after, the latter still experienced coal flows until 1986, the complete closure of the East Kent Railway coming in 1987.

Adisham has fared the test of time very well and retains a number of authentic features. The Southern Railway omitted the brick platforms from the widespread concrete rebuilding of the period, but did incorporate concrete lampposts on the platforms. These themselves were replaced during the 1970s with rounded metal posts, but both supported electric lighting. All sidings were lifted after the closure of the goods yard, but the shed building was retained, as thankfully was the original ‘’up’’ side waiting shelter (although now devoid of canopy valance) and SE&CR footbridge – even the vintage LC&DR railings on the ‘’up’’ platform remain. The platforms were lengthened at their northern end in 1959 with concrete extensions, in connection with Phase 1 of the Kent Coast Electrification. A notable casualty has been the imposing signal box, which closed in February 1979 when control passed to the still extant cabin at Canterbury East. Since the below pictures were taken, the historic station building had been the treated to a nice new coat of white paint. However, soon after this, the structure was the subject of a severe attack by graffiti vandals. 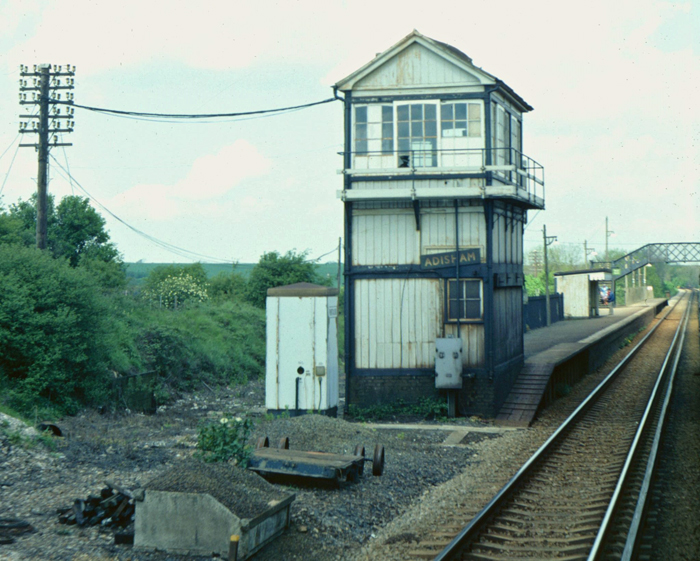 The tall signal box, built to the LC&DR's own in-house design, is seen at the Dover end of the "up" platform, three months after closure. Note the similarity of the cabin's top portion to the signal box at Shepherds Well, which was also built to the same outline. To the left of the signal box is a portaloo, whilst in the background can be seen the concrete extension of the "up" platform, made in connection with the Kent Coast Electrification Scheme. © Tom Burnham 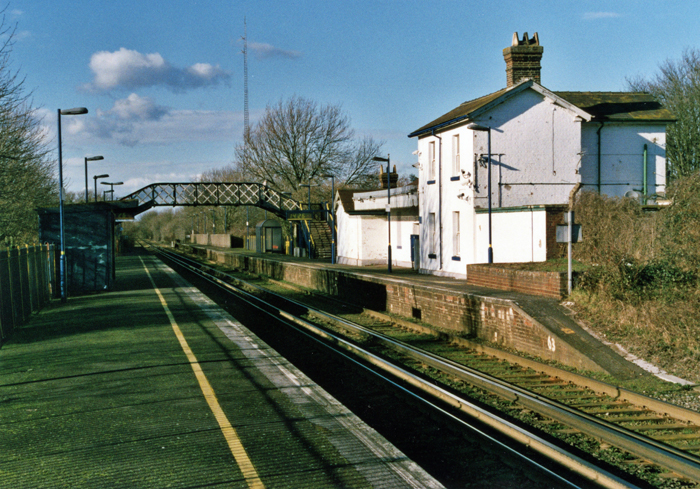 Typical LC&DR architecture in evidence in this Faversham-bound view. The main building on the "down" platform is a variation of a standard design, which can still be seen at Sole Street and Farningham Road stations. Note the unusual end of the "down" platform, which has a shallow brick surround; a siding once terminated there. The lattice footbridge is of SE&CR origin and the "up" timber waiting shelter dates from the station's earliest years. The bus shelter on the "down" side dates from about 1990. © David Glasspool 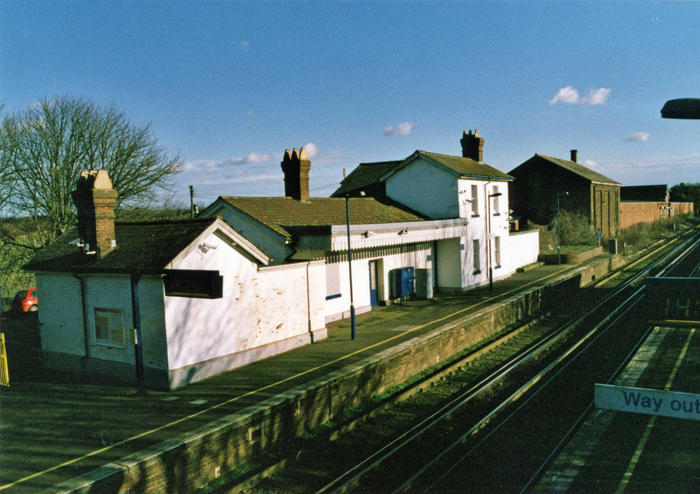 A view from the footbridge reveals the still extant goods shed and also the substantial development which has taken place on the former goods yard's site. The station building has lost one chimney stack (from the former Station Master's house portion), but still retains its unusual exhausts. © David Glasspool