This station opened with the Bexleyheath Line on 1st May 1895, but unlike its counterparts further west along the route, the layout was not built to the standard design. Clapboard was used throughout, but the main station building was situated perpendicular to the platforms, elevated upon an embankment on the ''up'' side. Consequently, the platforms each had a small timber waiting shelter to the route's standard design, with the unusual curved roof (an example of which is still in existence at Welling). At the Dartford end of the ''up'' platform was situated the station's signal box, built by the contractor ‘’McKenzie & Holland’’, with a brick base and a timber-clad upper half. Barnehurst's isolated main building did provide the station with a distinct advantage over the standard layouts at Bexleyheath, Welling and Eltham Well Hall: it meant that a footbridge of typical SER lattice design had to be provided from the outset. Passengers at the aforementioned trio of stations made do with track-level foot crossings. Despite this luxury, the goods facilities here were still somewhat meagre, merely a single siding (incorporating a loop) being laid, this being without any form of goods shed building.

Under Southern Railway ownership, the whole Bexleyheath Line underwent considerable modernisation. The first significant leap forward was the inauguration of electric services on all North Kent routes from 6th June 1926, which led to a rapid increase in housing development along the three lines. During 1931, the stations along the Bexleyheath Line underwent rebuilding, clapboard structures being replaced with more solid brick buildings. Barnehurst retained much more clapboard than its counterparts along the same route - in fact, more or less all of it. The ''down'' side timber shelter was kept, but augmented with an upward-slanting canopy of typical 1930s SR design. The ''up'' side also retained its shelter, but received new brick-built waiting room, this of which instead had a horizontal-laying canopy. Interestingly, the main clapboard station building upon the embankment was kept in its entirety, but received a new brick façade of the square SR architecture of the period. The goods site was re-arranged to allow the doubling of length of the existing siding and the laying of an additional track. This was to meet the increased demand for coal traffic, a direct resultant of housing development.

A very significant and imposing feature which arrived in 1926 was the electric sub-station, situated behind the ''up'' platform and feeding the LSWR's 660 Volt third rail system. An identical structure had also appeared concurrently at Dartford Junction, where the Dartford Loop via Sidcup splits from the Bexleyheath and Woolwich lines.

Under British Railways, the first significant modifications were to the platforms, which received prefabricated concrete extensions at their Dartford end during June 1954, for the acceptance of ten-vehicle EPB units. With these extensions also came the distinctive concrete bracket lamp posts of the Southern Region. The pair of coal sidings went out of use in 1962, their site of which would later give way to car parking space. Colour lights were installed along the route, all centrally linked with the Dartford Panel. This signalling centre became active on all North Kent routes from 1st November 1970, rendering semaphores and mechanical signal boxes, such as that at Barnehurst, obsolete. It was also around this time that the ''down'' wooden canopy valance was replaced with the then customary BR corrugated sheeting. This was then followed in the same decade by the installation of metal lamp posts, superseding the concrete brackets of the mid-1950s. Only in more recent years have the main clapboard building and the 1931 brick façade succumbed, being replaced by a single-storey all-brick structure on the same site.

In 2014, Network Rail started a power supply upgrade programme, encompassing all three North Kent routes via Sidcup, Bexleyheath, and Woolwich, to Charing Cross, Cannon Street, and London Bridge. This was to support the introduction of twelve-vehicle Class 465 "Networker" formations to the rush hour timetable. A series of new substations have subsequently appeared along these routes, the equipment having been provided by "Siemens" and installation undertaken by "UK Power Networks". At Barnehurst, these works have involved demolition of the 1926 substation on the "up" side of the line, and a collection of metal-clad huts have appeared on the same site. 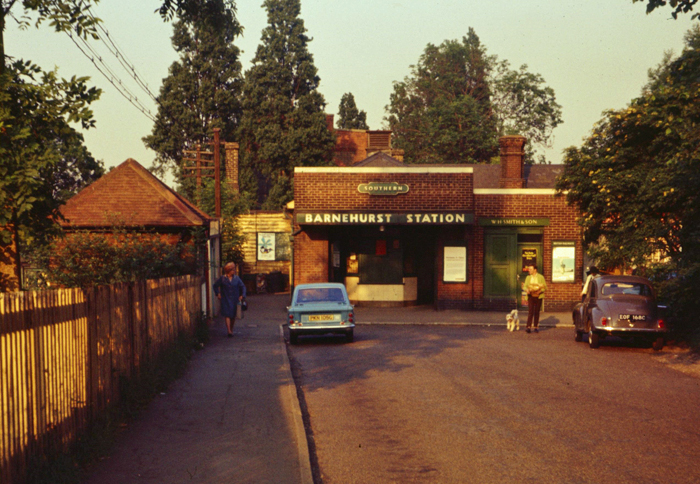 A classic view of the "up" side from 1970 shows the "high-level" station entrance, which includes the 1930s façade and "Passimeter" booking office, complete with BR "Sausage" totem declaring "Southern". Note the W.H. Smith & Son shop to the right of the booking office. The original timber station building of 1895 can just be seen emerging from behind the SR entrance, it having survived the SR's modernisation of the line in 1931. The platforms are down in the cutting beyond the fence on the left. The cars are on the left and right are a Hillman Imp and Morris Minor respectively. © Tom Burnham 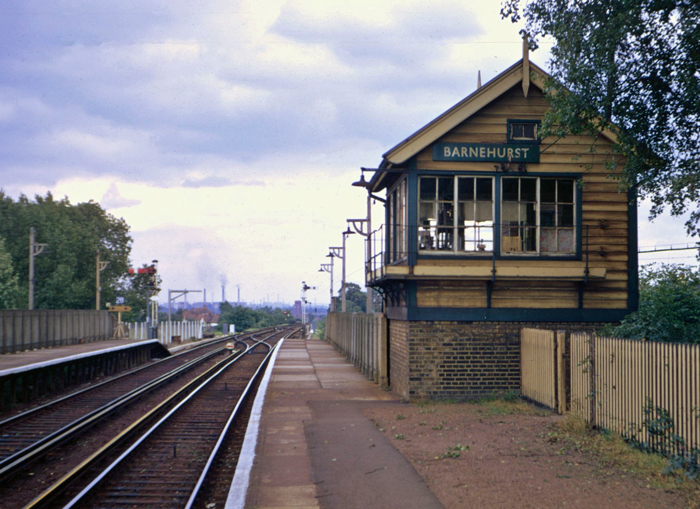 An eastward view from the "up" side shows the signal box which was erected by contractor "McKenzie & Holland" in 1895. Later additions are the prefabricated concrete platform extensions and bracket lampposts, which arrived in 1954. The semaphore signals were due to go out of use in the following November, their replacement being four-aspect colour lights controlled from a panel at Dartford. On the left can be seen the remains of the loading gauge, situated within the former site of the goods yard. At the time, this site had only recently been fenced off. The trailing crossover and shunt signal at this end of the station were used for terminating trains. © Tom Burnham 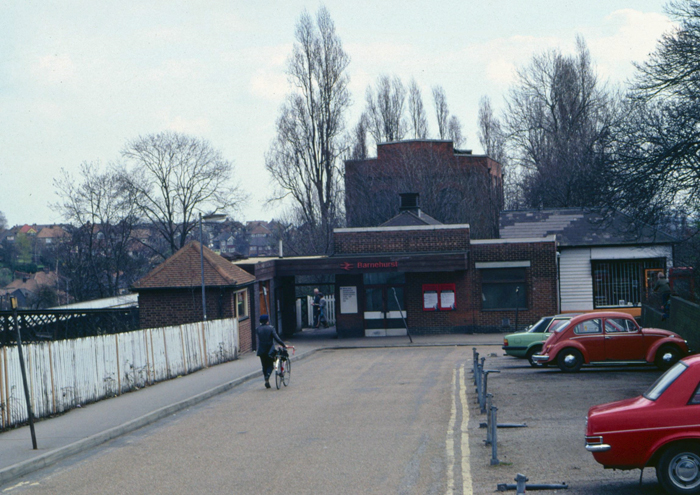 By 1982, the "up" side "high-level" entrance had received a series of modifications since the earlier photograph. The "Passimeter" booking office has been removed, the entrance having been narrowed by an extension of the brick wall and insertion of double doors. British Rail "Arrows of Indecision" signage is now evident, and it appears that half of the SER timber station building has been taken away. The vehicles populating the car park this time around are a Vauxhall Viva, Volkswagen Beetle, and a Ford Cortina. © Tom Burnham