This station has had an unfortunate history, but in much more recent years, it has seen a revival. It opened later than the North Kent Line of 1849, coming into use in March 1859 on the edge of the Erith Marshes. What was particularly interesting here was the variety of structures which constituted the layout. As expected, there were two platform faces, situated directly opposite each other across the double-track. From the outset, a track foot crossing was in use at the western end of the layout, this being superseded by a lattice footbridge some thirty years later. Each platform received an identical timber waiting shelter, with backward-sloping roofs, to the same basic design as that which had appeared on the ‘’up’’ platform at Erith some ten years earlier. The main building here was also of the now familiar architecture: situated on the ‘’up’’ side, immediately to the west of the wooden shelter, the structure was single-storey, demonstrated a pitched-roof, and was of tongue-and-groove timber construction. The significance of each platform being host to a waiting shelter now becomes more apparent: there was no provision of a canopy. It was around this time that clapboard began creeping into station design in a large way (indeed, there are a number of earlier examples than this), but the incorporation of a brick-built structure had not been forgotten here. Decidedly humble this arrangement seems, its presence on the route was, however, made several times more imposing by the existence of the Station Master’s residence, immediately to the west of the clapboard booking office. Two storeys high, it would appear that this structure was based on the general outline of the station building at Erith. However, it was by no means as elaborate as the latter, instead resembling to a greater extent the plainness of the 1906-built ‘’up’’ side offices at Woolwich Arsenal.

Goods facilities were provided here, a trio of sidings being in evidence on the ‘’up’’ side, to the west of the platform. The two northern most of these tracks terminated either side of a ‘’dock’’ platform surface, being 30 and 130 yards in length respectively. Whilst a crane rose from the end of the dock platform, there was no goods shed present. The lack of such a structure seems to be very common on the original North Kent Line – in fact, as far as the stretch of line west of Dartford is concerned, only Erith could lay claim to having a goods shed from the outset. The layout was controlled by a SER designed signal box, which came into use about two decades after the station. It was situated on the ‘’down’’ side, separated from the western end of this platform by a level crossing.

The first significant alterations occurred during Southern Railway ownership. This included the customary practice of removing the original Victorian glass-clad gas lamp holders from their wrought iron struts and replacing them with more modern equivalents. The suburban electrification of 1926 marked the construction of a structure more imposing than the SER Station Master’s house: on the ‘’up’’ side, 100 yards west of the platforms, a three-storey high red-brick substation emerged. These became familiar sights across the whole of the South Eastern Division. The substation was to become Belvedere’s only brick structure; a bombing raid of 1941 saw the Station Master’s house completely destroyed, but incredibly, the more fragile wooden buildings remained intact. Station repairs saw the construction of a makeshift canopy on the ‘’up’’ platform, fronting the booking office and waiting shelter. The struts of this obscured the original course of the footbridge’s ‘’up’’ side flight of stairs; the latter were subsequently removed and a new, incongruous appendix affixed to the lattice structure’s southern elevation.

1955 saw the extension of the platforms at their eastern ends with prefabricated concrete in connection with the ten-car train scheme. Also, construction of a new signal box got underway (based on the same fundamental design as that which had opened marginally earlier at Grain), this being situated directly opposite the SER cabin, on the other side of the level crossing. It replaced the earlier cabin in the following year. Goods traffic was withdrawn on 10th June 1963, but interestingly, this land has not been redeveloped, thus evidence of the yard can still be seen. By the 1960s, the station was a somewhat shabby and makeshift affair, but modernisation was set to occur, sadly for the worse: in 1968, the whole station became a CLASP affair, like nearby Slade Green. A dubious traditional air was retained by the presence of manual crossing gates, but these were subsequently superseded by automatic lifting barriers on 25th January 1981. From the outset, these were controlled from the signal cabin at nearby Crabtree Crossing, some 550 yards east of the station, using closed circuit television, which made Belvedere signal box redundant. The latter had been acting merely as a gate box since the Dartford area re-signalling of 1970. Both Belvedere and Crabtree Crossings came to an end, their closure coming on 13th March 1989. The latter was replaced with a concrete footbridge with metal bars, whilst the former allowed extension of the station platforms westwards. CLASP was a feature of the station for another decade, a much more permanent red-brick single-storey structure not opening on the ‘’up’’ side until 2000. 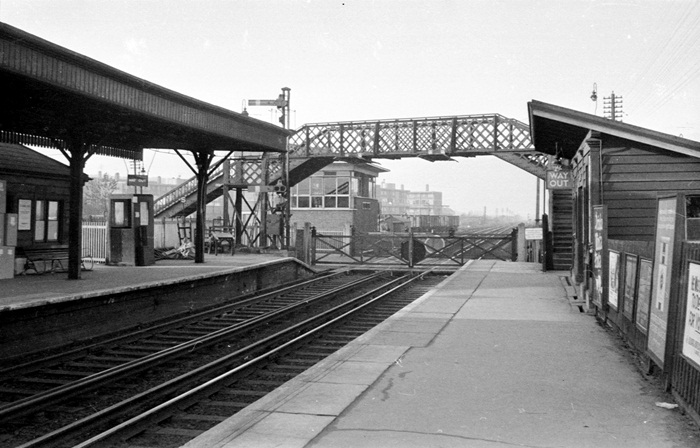 A London-bound view from the ''down'' platform shows the station layout after World War II bomb damage, the main brick building once occupying the gap in-between the ''up'' canopy and footbridge. On the far left, we can see the end of the SER timber booking office. Beyond the manual crossing gates is the signal box of 1956, which replaced an SER cabin on the opposite side of the running lines. Behind the signal box, a line of wagons can be seen in the goods yard. The presence of the ''up'' platform canopy required the duplication of the ''up'' starter signal, to ensure drivers' views were not obscured. © David Glasspool Collection 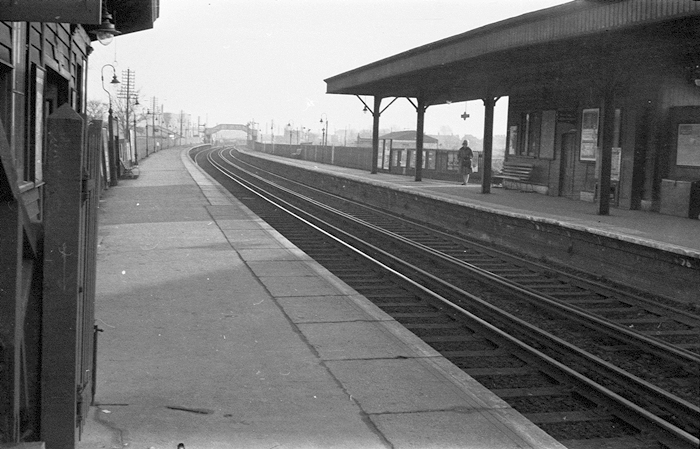 A Dartford-bound view shows Swan Neck lampposts in abundance and, just beyond the ends of the platforms, a second footbridge across the running lines. The timber shelter on the left is that seen on the right of the previous photograph. All platform structures in view here were swept away in 1968 © David Glasspool Collection 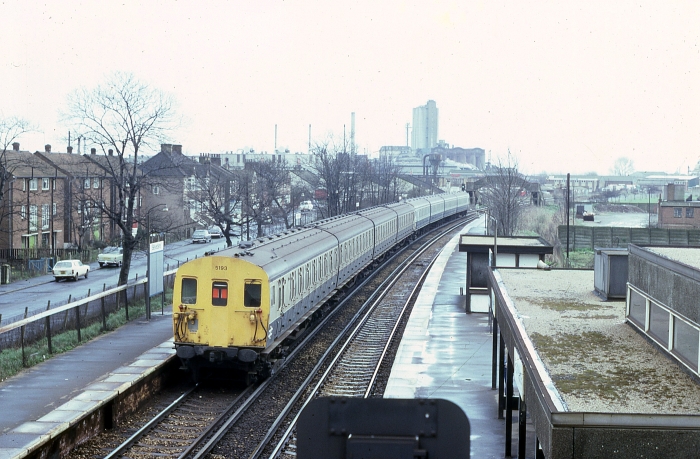 The station's architecture was at a low point when seen in this Dartford-bound view, comprising prefabricated CLASP structures dating from 1968. Bulleid-designed 4-EPB No. 5193 is seen forming the rear of a "down" service with a BR-designed classmate, the train being at milepost 13 from Charing Cross via Lewisham. Dominating the skyline is Erith Oil Works, and the footbridge over the tracks in the background marks the former site of a level crossing. © David Glasspool Collection 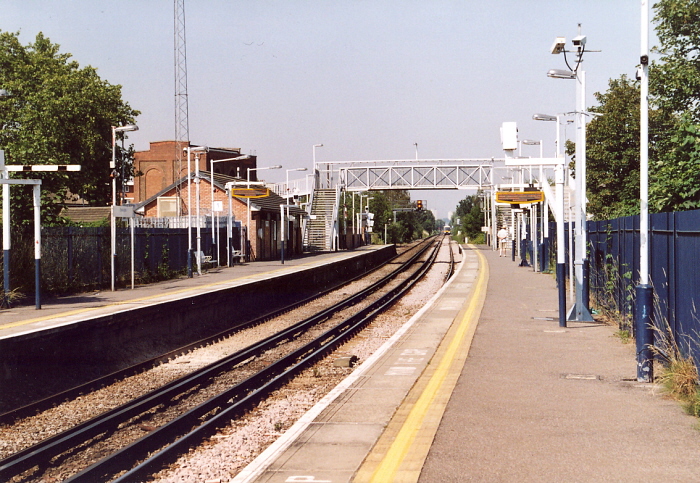 The substation of 1926 is the oldest structure in this westward view of Belvedere, from 3rd July 2006. The new station building is a slightly smaller version of a contemporary example at Crayford. © David Glasspool