This is one of the best remaining examples of SER "economical" architecture on the South Eastern Division. The station opened with the "Dartford Loop Line" on 1st September 1866, this of which had been brought into use to relieve congestion on the existing North Kent Line via Woolwich and Blackheath. The buildings and general layout provided here virtually replicated the station just along the line at Lee, which opened on the same date. Both such stations had the luxury of a subway: these would more commonly be associated with the pre-economical era of the SER, examples being noticeable on the 1849-opened route. Indeed, a number of stations on the Sidcup route and the latterly-conceived Bexleyheath line were not even provided with footbridges, a track crossing being suffice. Northfleet may, at first glance, fall into the same category of clapboard mixed with subway, but it is worth remembering that when first built, this station was actually of brick construction. At Bexley, there were two clapboard station buildings in evidence, one twice the length of the other. The smaller example was positioned on the "up" side; interestingly this did not have a canopy extending from it. The latter was instead sandwiched in-between the aforementioned building and the subway entrance, a quite peculiar arrangement. Meanwhile, the larger clapboard structure on the "down" side demonstrated the flat-roofed canopy which was a familiar feature of the line.

Goods traffic was well provided for here, despite no goods shed ever being present in the yard. There were a total of five sidings on the "down" side, to the west of the station building. Three of these trailed off at about thirty degrees to the main structure, one terminating alongside a row of coal stacks (this becoming an increasingly important commodity as agricultural land was given over to housing development). A fourth siding terminated at a dock, end-on with the "down" platform, whilst a fifth siding was instead eastward-facing. Farm produce was an important traffic dealt with here in the early years, fruit and vegetables having been grown in the local fields, but as aforementioned, such open land was redeveloped and the quantities of produce handled, reduced. Controlling the layout was an SER-designed signal box, two-storeys high and of all timber construction. This came into use about twenty years after the station, and was positioned just beyond the western extremity of the "up" platform, the signalman being afforded a clear view over the sidings.

The first changes occurred on 19th June 1926 when full electric working along all North Kent routes commenced. Although third rail had appeared alongside the tracks, the station itself was little changed, and the goods yard remained. Next, in April 1955, work began on partial rebuilding and lengthening of platforms in conjunction with the ten-car EPB scheme; these formations commenced operation along the line on 13th June of that year. Goods facilities went out of use in May 1963, but fortunately, the station escaped the notable eradications of many timber buildings on the South Eastern Division - it has even kept its brick chimney stacks, features which the wooden structures at Northfleet and East Farleigh can no longer lay claim to. Unfortunately, the "up" side timber structure was not so lucky, this succumbing in about 1982, but the original canopy on this platform did remain, as did the roofs of the subway entrances. The SER signal box had also since been lost, its official closure coming on 1st November 1970 with the commissioning of the Dartford Panel. Meanwhile, there had been additions: a rectangular bus shelter had appeared on the eastern half of the "up" platform in 1968, and during the 1955 platform lengthening, concrete lamp posts supporting electrical lighting, had appeared.

Although a small intermediate station, Bexley did have a brief claim to fame. On 4th February 1997, the derailment of the 10:18 Three Bridges to Hoo Junction infrastructure working occurred over the high street. It was double-headed by Class 37s Nos. 37167 and 37220, these hauling eighteen ballast wagons, the rear seven of which derailed. These were then dragged in this state for a very short distance, subsequently falling over the side of the viaduct arches where workshops were located. Consequently, six arches collapsed, these and the bridge over the River Cray having to be rebuilt. This was not the Dartford Loop Line's first serious derailment; another had previously occurred on 11th October 1977 to the west of Mottingham station, when double-heading Class 33s hauling loaded cement wagons from Northfleet to Dunstable, collided with already derailed coal wagons of a freight on the "down" line. The leading locomotive, No. 33036, rolled down the embankment and due to the crash damage sustained, was prematurely withdrawn two years later. It was scrapped in October 1979 at Slade Green. 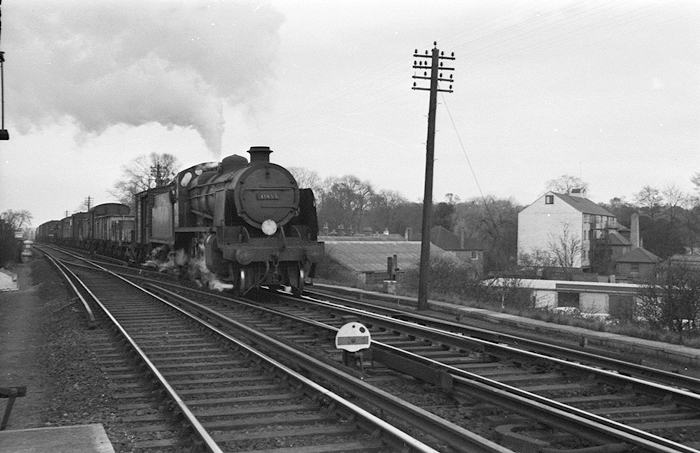 "N" Class No. 31855 is seen from the end of the "down" platform, fronting a mixed freight. The head code tells us that the train has come round the Crayford Spur. At this time, the engine was allocated to the shed at nearby Hither Green. In the background, on the right, is the Old Mill, which was destroyed by fire in 1966, but subsequently rebuilt in 1970. © David Glasspool Collection 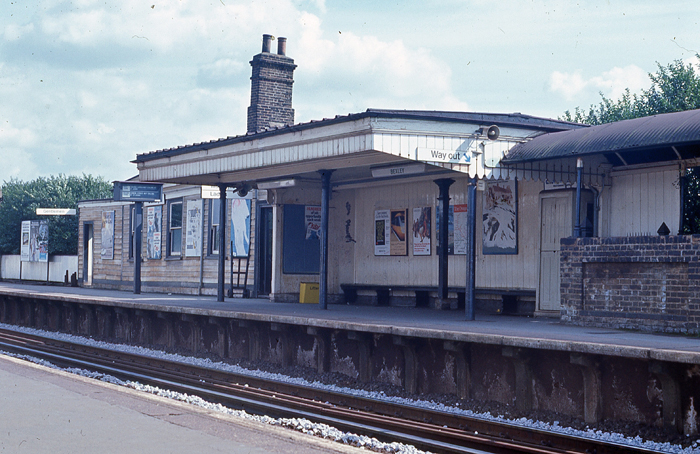 This view from about 1980 shows the SER "up" side structures, which at this time contained ladies' and gentlemen's toilets. The whole clapboard structure on the left, complete with chimney stack, was demolished shortly after this picture was taken, but the canopy and subway entrance still survive today. The platform indicators were advertising two Cannon Street services which were not calling at St Johns. One of the advertisements under the canopy comprised a picture of an HST 125 in original BR Blue/Yellow/Grey livery. © David Glasspool Collection 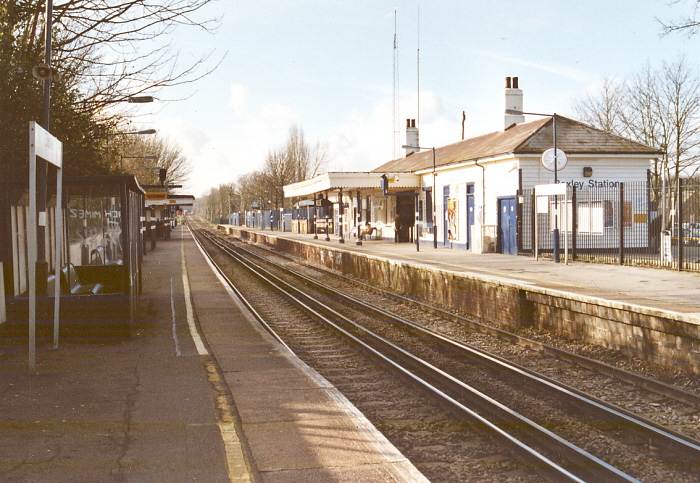 The well-presented station is viewed from the "up" platform, displaying its recent white and blue paintwork. The canopy of the timber waiting shelter can just be seen emerging on the left. An additional timber building, about a third of the size of the existing "down" side station structure, formerly graced the "up" platform, immediately to the west of the surviving wooden canopy. © David Glasspool 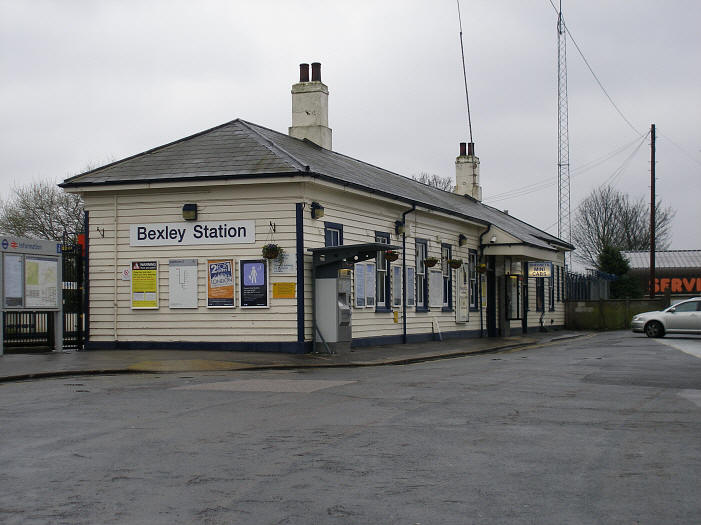 Appalling weather, but immaculate station: the splendour of the restored SER clapboard, complete with sash-style windows, is in evidence at Bexley. The structure is 108-feet long, and its western third is let out to a taxi firm. Several buildings of this ilk were dispensed with during station modernisations under Network SouthEast auspices, but notable survivors include Pluckley and East Farleigh. © David Glasspool