The Bexleyheath Line was not a South Eastern Railway-inspired concept, but rather that of an independent group which named itself the ''Bexley Heath Railway'', after the passing of an Act on 20th August 1883. The Dartford Loop Line via Sidcup, the SER's second North Kent route, had opened to traffic on 1st September 1866 and this, like its earlier counterpart via Woolwich, experienced good loadings from the outset. However, the SER's board did not view a third route via Bexleyheath as a profitable venture. Beyond acting as a diversionary route when one of the other lines was out of action, the company could not foresee traffic which would be lucrative enough to justify construction.

Years of talks and disputes ensued between the SER and the "Bexley Heath Railway" group over the proposed route: this was to diverge just west of Dartford and rejoin the existing Dartford Loop Line at Lee. Eventually, the SER was swayed to build the line and provide the necessary capital to fund it. However, the original proposals were modified in 1887 so that the western end of the route joined the original North Kent Line at Blackheath, rather than the Dartford Loop Line at Lee.

The Bexleyheath Line opened on 1st May 1895 after arduous and troublesome earthworks had been overcome. Worked by the SER from the outset, the company's fears over the line's usefulness were well founded, because traffic from the outset was light. The route lacked the matured population centres served by the original North Kent Line via Woolwich, and its potential was not realised until the urban sprawl of the 1930s. The independent "Bexley Heath Railway Company" was vested into the SER in 1900, which itself had become part of the SE&CR Joint Managing Committee in 1899.

The stations along the Bexleyheath Line were typically SER in character. Main structures were of timber construction, evidence that attempts were made to keep costs as low as possible. The station at Bexleyheath was situated upon a gentle curve within a shallow cutting, 12¾-route-miles from Charing Cross, amongst a large expanse of flowing fields. Two platforms around a double track were in evidence from the outset, these of which were equipped with diamond-shaped gas lamps upon barley-twist posts, and the main building was situated on the "up" side. The latter was single-storey and of tongue-and-groove timber construction, with a hipped slated roof, sash-style windows, and a pair of brick-built chimneystacks. The building was constructed to a standard design which came into use at all stations along the line (that at Barnehurst was slightly different due to its "high-level" location), and featured an attractive canopy with clover-pattern valance and curved roof. Indeed, this design of canopy can still be seen in use at Paddock Wood.

On the "down" platform was a small timber waiting shelter, which possessed a backward-sloping curved roof. No longer extant at the site today, an identical structure is still in use at neighbouring Welling. An expense avoided was that of providing a footbridge, a simple track foot crossing between the platforms being used instead.

Given that the station was located within a cutting, no room was available nearby for any sidings. As a result, an isolated goods yard was established ¼-mile west of the platforms, this of which began life as a single siding feeding off the "up" line. Overlooking this from the opposite side of the tracks, between which was a trailing crossover, was an attractive signal box, situated upon a brick base and featuring a gabled pitched roof. This was built by signalling contractor "McKenzie & Holland", and the same firm was used by the SER to signal the entire Bexleyheath line. The SER had, until now, carried out most of its own signalling work, but such was the amount required by the 1890s that the company increasingly used contractors. A ground-level timber cabin also existed at the eastern end of the "up" platform, at which point there was another trailing crossover between the running lines. 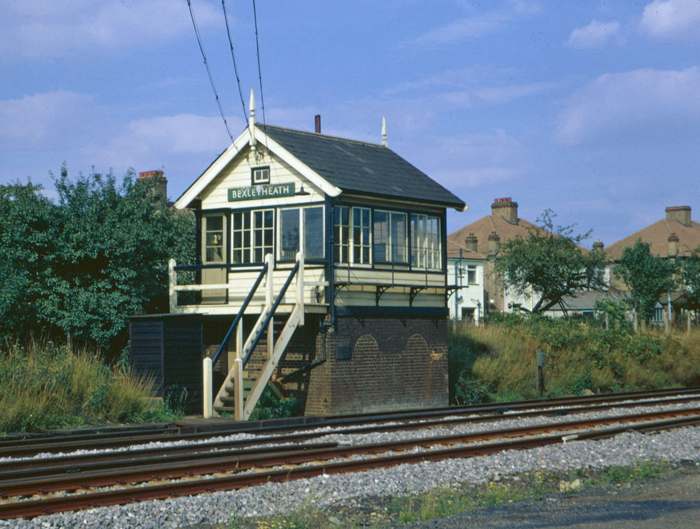 The attractive signal box, built by "McKenzie & Holland", is seen nearly three months before closure. The cabin was located on the "down" side of the line, ¼-mile west of the the station. Fresh ballast in the foreground suggests that the trailing crossover between the lines here had only recently been removed as part of the re-signalling. The brown clapboard structure beside the signal box's staircase was a toilet. © Tom Burnham 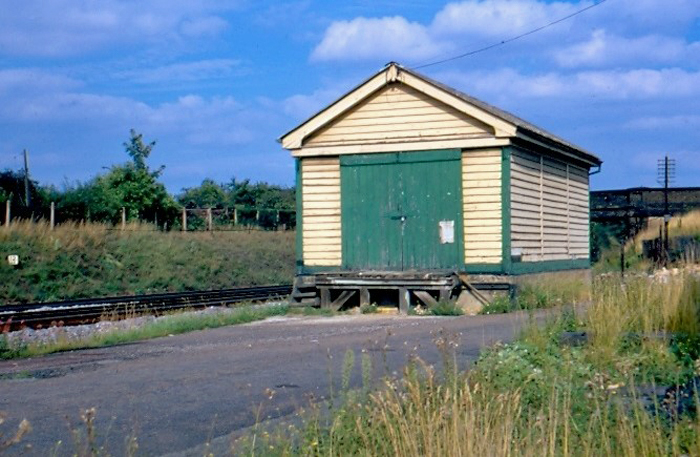 Looking more like a scene from a countryside branch line rather than a heavily-used commuter route in suburbia, we see the defunct goods shed in this eastward view. This came into use a short while after the station and, from the outset, was not rail-served. It resided on the opposite side of the running lines to the signal box and milepost 12½ from Charing Cross. The entire timber structure sat upon a brick base and had a loading platform protruding from the front. Note the small timber steps to the left of the platform. © Tom Burnham