On 3rd December 1860, the London Chatham & Dover Railway commenced operation out of Victoria, and through running was possible at this time to as far as Canterbury. The company’s metals terminated at St Mary Cray: between here and Shortlands (then called ‘’Bromley’’), the LC&DR utilised the rails of the Mid-Kent Railway. Westwards thereafter was the network of the ‘’West End of London & Crystal Palace Railway’’ (WEL&CPR). This company had established a line between Shortlands (Bromley) and Battersea, via Crystal Palace and Balham. At Battersea, the network of this independent concern joined the metals of yet another separate company, the ‘’Victoria Station & Pimlico Railway’’, which owned the West End terminus and the route over Grosvenor Bridge. The LB&SCR had been running into Victoria since 1st October 1860, again by means of the WEL&CPR. Before completion of a station in the West End, the WEL&CPR’s route terminated at a temporary wooden ‘’Pimlico’’ station in Battersea; the name was puzzling, since the Pimlico area of London was in fact north of the river. During construction of Victoria, the LB&SCR took control of the Crystal Palace to Battersea section of the WEL&CPR’s route. Formal takeover was on 1st July 1859 and such a move safeguarded the company’s future access to the station. Since the advent of the LC&DR at Victoria, controversy had existed between the two companies over usage of the shared terminus. So strong was the acrimony between the LB&SCR and LC&DR that a separate Victoria station for the latter was built alongside the existing establishment, this opening on 25th August 1862.

Unfortunately for the LC&DR, the whole of the remaining WEL&CPR system had been absorbed by the LB&SCR during 1860, and thus the former found itself paying toll charges to its station rival. Further to this, the Mid-Kent section between St Mary Cray and Shortlands was leased to the SER, as an extension of the line from Lewisham, and it would not be until 1st September 1863 that the LC&DR fully took over the operation of this stretch of line. On the plus side, however, the LC&DR had, in 1860, witnessed the passing of the ‘’ Metropolitan Extension Act’’ through Parliament. This Act not only permitted the company to construct a completely new line between Beckenham and Battersea via Herne Hill, to avoid the LB&SCR’s tolls, but it also allowed the building of a double-track spur to the City of London. With reference to the latter, this would diverge from the LC&DR’s own route at Herne Hill, slicing through Camberwell, Elephant and Castle, and Southwark, to reach the Thames’ South Bank. In addition to reaching the City – the capital’s financial powerhouse – impetus for this line was furthered by the opportunity of joining the rails of the Metropolitan Railway at Farringdon. The LC&DR's Victoria via Herne Hill route opened to traffic on 1st July 1863.

Construction of the City line ensued throughout 1863 and by June 1864, was complete, opening on the 1st of that month to a station on the south bank of the Thames, christened ''Blackfriars''. This was a substantial terminus, consisting of four lines protected from the elements by an overall roof, the latter supported by elaborate brick walls - certainly grand in light of its later conversion to a freight terminal. Access to the City was soon gained by an extension from the original Blackfriars, over the Thames to a temporary station on the north bank by means of a four-track bridge, this having five lattice spans supported by twelve pillars arranged in four rows of three, each pillar itself being constituted of four columns. Temporary accommodation for terminating services in the City was in use from December 1864 until June 1865, when on 1st of that month Ludgate Hill station opened to traffic. Trains terminated here until January 1866, when the LC&DR further extended the line to meet the rails of the Metropolitan Railway, a junction subsequently being built at Farringdon, and Ludgate Hill becoming a through station. Traffic congestion at Ludgate Hill resulted in the commissioning of yet another station on a separate spur off the Ludgate Hill to Farringdon stretch of line, opening as ''Holborn Viaduct'' on 2nd March 1874. Trains of the SER had access to this useful south to north link from 1st June 1878, when a spur was opened on a curving gradient beyond the Cannon Street junction, up to the LC&DR viaduct. 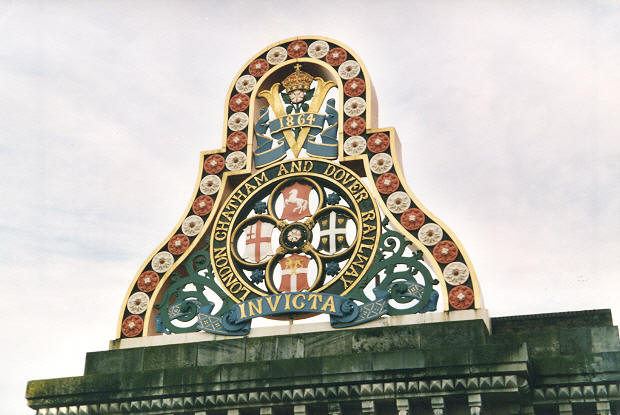 The crest of the London Chatham & Dover Railway seems an appropriate beginning to the pictorial.

abutment on the South Bank, in the company of an identical crest opposite. It is seen here on 27th 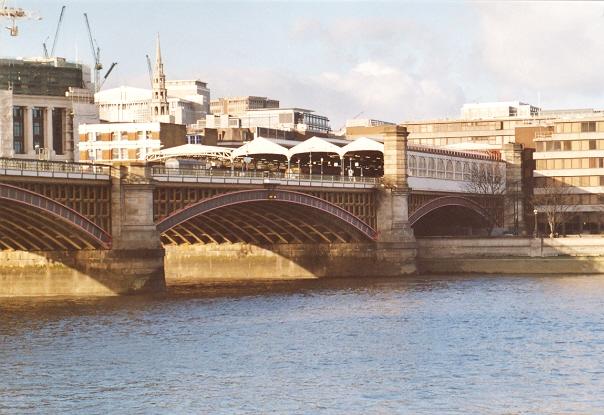 2006. The trainshed owes its survival to its position on one of the bridge spans - sadly its concourse

counterpart was not so lucky. David Glasspool 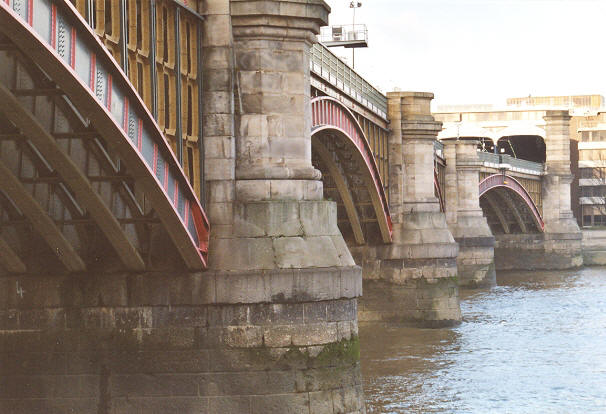 The previous picture was deceptive, hiding the ''kink'' in the railway bridge. The lines fan out