This interesting station opened with the original North Kent Line via Lewisham and Woolwich on 30th July 1849. The circuitous nature of the route was necessary to avoid the Royal Observatory at Greenwich, it being deemed at the time that nearby trains would interfere with astronomers' study of the skies. Blackheath had four platform faces from the outset - quite considerable for what was just an intermediate station - two of which were westward-facing terminating bays. A peculiarity of this station was the provision of trainshed coverage for the ''up'' side bay line and its two parallel sidings. Whilst overall roofs were in use at the SER's Canterbury station, these at least provided the platform faces with protection from the elements, but at Blackheath this seems not to be the case, suggesting it was merely intended for carriage storage and its incorporation into the station complex was just for convenience. This feature appeared a few years after the station's opening. The platforms here were lengthy and whilst standard canopies did exist for passengers, these were severely restricted in length to match the dimensions of the main brick-built station building on the ''up'' side. A single siding had been installed to the west of the ''down'' platform for rolling stock storage, but such provision would later see huge expansion.

Significant changes occurred in 1879: a new street-level entrance opened, straddling across the tracks, which also saw the removal of the ''up'' side carriage roof and considerable lengthening of both platform canopies. The street-level building is an interesting composition in itself: the year 1879 would have been included within the period of the SER's ''economical'' clapboard station policy, but instead this structure was crafted from elaborate stone and light-coloured brick. This would have been done to keep the station in sympathy with the immediate environs, expensive properties having been erected when the railway first came to the London suburb. However, whilst the façade and two side walls were constituted from brick, it is worth nothing that the rear of the building was instead fabricated from the more common clapboard of the period. This was presumably to limit the structure's weight on the bridge, but perhaps also partly as a result of this side of the building not being visible from the street, hence flamboyance was not an issue here. Proper goods facilities were installed on the ''down'' side, also in 1879, which included a double-track brick-built shed, but the most significant track work expansion was to the immediate west of goods site. Here, eleven new sidings were laid in parallel with each other, which provided passenger rolling stock storage accommodation and also allowed for lengthy goods formations to be re-marshalled. To break this monotony, special excursion and surplus continental stock were also stabled in these lines. To control the sidings, an SER-designed signal box, with a brick-base and clapboard upper half, appeared to the west of the platforms, on the ''up'' side. A second all-timber signal cabin appeared to the east of the main road bridge in 1895 to operate the junction with the Bexleyheath line, when this opened on 1st May of that year. When leaving Blackheath on a Woolwich line service, trains plunge into a 1681 yard long tunnel - the connecting spur between the Dartford Loop and the Woolwich / Bexleyheath lines, just to the west of Dartford station, came into use on 1st January 1942 in the event that this tunnel was bombed. Bexleyheath line trains venture into the shorter Kidbrooke Tunnel, 437 yards in length.

Under the Southern Railway, all North Kent routes saw electrification on 6th June 1926 as far as Dartford, which brought faster and more intensive services and led to a boom in both rail travel and housing. The extensive sidings at Blackheath remained, but did not receive third rail, consequently only being dedicated to steam-hauled stock. From 30th September 1935, Blackheath had services to all South Eastern Division London termini, with the commencement of electric services on the Lewisham to Nunhead freight connecting line, giving EMUs direct access to Victoria. What the SR did not do here, which it did at numerous other stations along the route, was rebuild the platforms in prefabricated concrete, thus Blackheath retains its bricks of SER origin. Victorian gas lamps did succumb, however, being replaced by concrete bracket electric lamps during the 1940s.

During 1954 and 1955 the Southern Region lengthened platforms at most stations along the North Kent routes with concrete extensions, to accept ten-vehicle EMU formations. At Blackheath, this did not take place, the existing brick platforms being long enough due to the presence of the bay lines. Any extension of platforms could only be done at the London end of the layout, and even that would require significant track alterations, the extensive carriage sidings still being in use. 1970 was a year of great change for the layout here. Semaphores and mechanical signalling went out of use on 15th March of that year with the commissioning of colour aspect lights, resulting in both Blackheath signal boxes being closed on this date. The extensive carriage sidings and goods facilities were decommissioned in the same year. All major station structures remained intact, thankfully not succumbing to the dreaded CLASP system, but severe truncating of the ''up'' side canopy was undertaken during 1985, coupled with the simplification of the remaining canopy valances. It is a shame that much of the canopy has been lost, but at least the station's façade was cleaned and repainted at the same time, after years of being exposed to pollution fumes. 1991 marked the lengthening of the platforms at their London end with concrete as part of Network SouthEast's endeavour to run twelve-car formations of Class 465 ''Networkers''. Sadly, clearance for this was never given and ten-car EMU trains are the longest to be seen on the North Kent routes, despite this additional platform capacity. Much more recently, in 2005, railings were fitted alongside the platform faces which formerly served the bay lines.

The recent installation of a 30-kV, oil-filled cable in the tunnel between Blackheath and Charlton, on the North Kent Line of the Southern Region, presented a considerable problem. The tunnel, which is 1,681 yd long, has little clearance between the walls and the running rails, and there is inadequate space for the joints necessary when normal production lengths of oil-filled cable are used for such long runs. It was therefore decided to cable the tunnel with three continuous runs of oil-filled cable each 1,725 yd. long. These cables, which are believed to be the longest continuous runs of cable yet manufactured, were made in extra large processing tanks at the Eastleigh works of Pirelli-General Cable Works Limited. They were paid out from drums mounted on railway wagons, and laid in trefoil formation in precast concrete troughing along the foot of the tunnel wall. All three were laid at the same time, and the operation took approximately four hours. The three single hollow-core oil-filled cables are fed by one 225-litre normal pressure tank at the trifurcating joint position outside the Blackheath end of the tunnel. The installation is part of the new 50-cycle frequency changeover scheme on the electrified lines of the Southern Region. 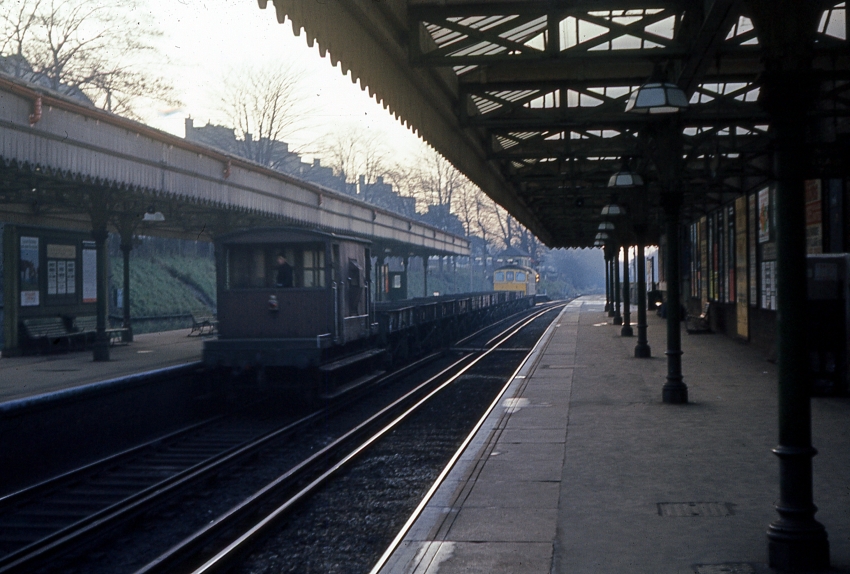 A splendidly atmospheric scene at Blackheath depicts a Type 3 (later Class 33) diesel heading westbound through platform 1 with a short freight. The locomotive was wearing all-over BR Green with full yellow warning panels. Even the guard is in view on his van at the rear of the train. Semaphore signals were still in use, the "up" starter just about being visible in the front of the formation, as is part of the signal box. The ornate canopies were at full length, long before being cut back, and SR hexagonal lampshades abound. © David Glasspool Collection 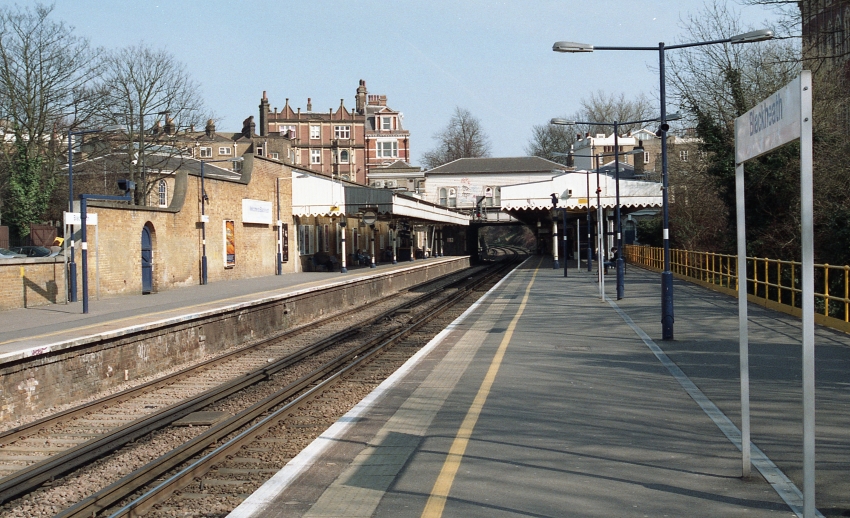 An eastward view shows that whilst the platform canopies retain ornate valances, they have been significantly shortened from their original length. Note the station building straddling the running lines; except for the street facade, the structure was timber-built to save weight. On the right are the yellow rails which were erected along the former bay platform face in 2005. © David Glasspool 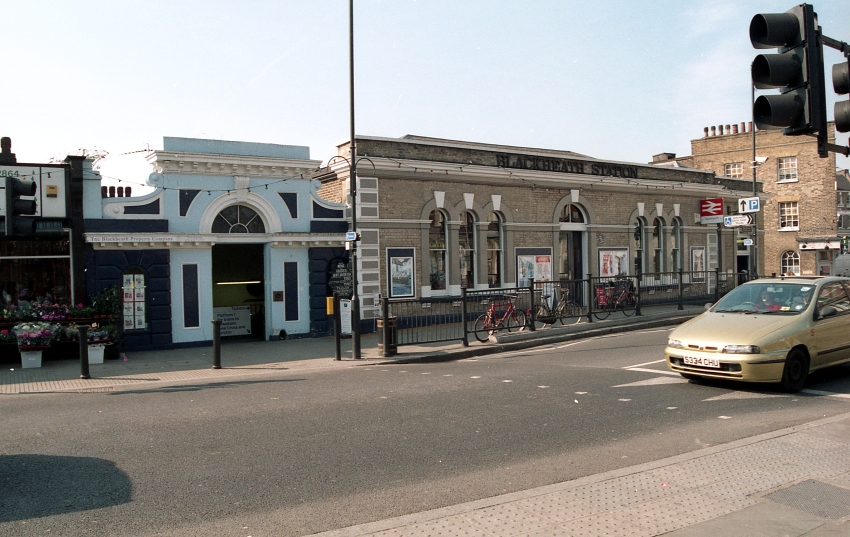 The brickwork of the elaborate "high-level" facade was restored to its present condition by British Rail in 1985, although the blue colours of the "up"platform entrance on the left-hand side has been applied since privatisation. To the right of the "up" entrance can just be picked out a vintage diamond-shaped sign stating bridge weight restrictions. © David Glasspool