This is a type which has not had a heavy involvement with the South Eastern Division, nor the Southern Region in general, but on those occasions it did, the circumstances were well known. Before looking at the class’ specific dealings with Kent, it seems appropriate to recount a brief background of the illustrious type. The class became one of twelve ‘’standard’’ engine types developed under the British Railways auspices. Shortly after nationalisation in 1948, the then newly formed British Railways Board (BRB) undertook a review of the motive power which had been inherited from the independent railway companies. What soon became clear was that the entire locomotive fleet was constituted of hundreds of different class types, many of which were nearing retirement or in some cases, were already life-expired. From the outset the government-owned organisation needed to reduce costs as soon and as practical as possible, and such would not be easy with a war-battered railway. However, efforts began in earnest almost immediately and in its first year, the BRB had enlisted the services of the renowned locomotive engineer Robert A Riddles, formerly of the LMS, to take responsibility for the Mechanical & Electrical Engineering department. Riddles was given the task of developing a small range of new steam locomotive designs which would eventually replace the older pre-nationalised classes. It was envisaged that the very last steam locomotive builds would see service right through until 1990. Whilst many other countries at the time were already in the transitional stage from steam to diesel and electric traction, it was claimed at the time that Britain was unable to afford the huge capital cost of route electrification, such financial restraints being a resultant of World War II. Furthermore, foreign exchange funds were not available for the importing of oil to be refined into a useful form of diesel fuel, thus the perpetuation of steam locomotive construction was only natural, given the circumstances.

Riddles' eventual course of action was to use the best pre-nationalisation designs and incorporate the finest qualities of each into his standardised locomotives, thus procuring the greatest engineering feats from all of the former railway companies. Taking his background into account, it is hardly surprising that virtually all of Riddles' final products would bear much resemblance to the designs pioneered by the LMS, particularly those locomotives which were products of Stanier and Ivatt. The first step towards producing new designs were the ‘'Locomotive Exchange Trials’'. Assisted by E. S. Cox and a design team, Riddles initiated his proceedings by selecting a number of express type locomotives from each of the newly-formed Regions and employing them on ‘'foreign’' territory, such occurring in his first year of office. This gave the design team some important information on how suitable particular locomotive classes were to certain stretches of line. For instance, Bulleid Pacifics arrived on the London Midland and Eastern Regions, and Stanier Coronation 4-6-2s were deployed on the Western Region. On completion of the Locomotive Exchange Trials, Riddles’ Chief Draftsmen put pen to paper and began to shape the first of the then new ‘’standardised’’ steam locomotives. By 1950 the first express passenger locomotive design had been finalised at Derby and in the same year, the British Transport Commission placed an order with Crewe Works for the building of twenty-four of the type. What emerged from Crewe on 2nd January 1951 was a 4-6-2 Pacific locomotive looking conspicuously like the Coronation class of engines designed by William Stanier, also formerly of the LMS. The imposing engine, finished in a plain black scheme with no lining, was scheduled for a test run between its birthplace and Carlisle on 11th January 1951, a dynamometer carriage being one of the consists of the train it was to haul. After the run, which proved to be a promising start for the class, the locomotive, numbered 70000, was repainted into the much more familiar lined BR Brunswick Green and delivered to Marylebone station on the penultimate day of January to be named. No. 70000 was appropriately called '’Britannia’' after the female personification of the British Empire, and it marked a very promising step forward for BR. Locomotives Nos. 70000 to 70024 had all been completed by the end of Britannia's inaugural year. The BTC placed another order for a further batch of locomotives, later numbered 70025 to 70037, the following year, all being completed by the end of 1952. A third order for locomotives Nos. 70038 to 70044 was placed in 1953, and a fourth in 1954 for Nos. 70045 to 70054, both batches of which were completed in September of their respective years. The latter batch was a modification of the original design, larger nine-ton tenders with curved upper edges being incorporated to allow a smoother airflow over the locomotive and increase water capacity; previous builds had been issued with a seven-ton tender. The locomotives had an average build cost of £26,000 each (some £547,700 by 2005 prices).

It is now appropriate to look at the class’ time down south. There was never a huge allocation of the type to the Southern Region in general, this due to the fact that 140 fairly new Bulleid Pacifics were already available. The allocation of the initial batch (Nos. 70000 to 70024) was split between three regions: Eastern, Southern and Western. The Eastern examples were based at Norwich Thorpe (32A) and Stratford (30A), the Southern engines at Stewarts Lane (73A), and those of the Western Region at Old Oak Common (81A) and Cardiff (88A). Of this entire batch, only two belonged to the Southern Region, these being Nos. 70004 ‘’William Shakespeare’’ and 70014 ‘’Iron Duke’’. Their core duty was a glamorous one, hauling the prestigious ''Golden Arrow'', a working which saw the pair turned out immaculately. In addition to this, the ‘’Britannias’’ could also be seen employed on the heavier non-Pullman Dover boat trains. The type’s association with the South Eastern Division ended when a locomotive exchange with the London Midland Region saw the pair transferred to Kentish Town (14B) in 1958. There they joined No. 70042, which had recently been transferred over from Stratford. Nos. 70004 and 70014 spent little time at Kentish Town, for later in the same year, they were sent northwards to Trafford Park (Manchester) shed. In place of the exiled Pacifics, the South Eastern Division received two standard 5MT engines, Nos. 73041 and 73042. Previously, there had been ‘’Britannia’’ involvement on the South Western Division: on 24th April 1953, Merchant Navy No. 35020 ‘’Bibby Line’’ suffered a broken crank axle at Crewkerne. This led to the whole of this class being withdrawn and during May of that year, ‘’Britannia’’ Pacifics were drafted in from the Western Region to cover for the temporary engine shortage, these being based at Old Oak Common. The Western Region received some more examples of the type when the second batch was completed, part of this also going to the North Eastern Region. The latter also received the third Britannia batch, whilst the fourth and final group of engines (with the nine-ton curved tenders) went to the Scottish Region.

Being the very first of the Standard types to be deployed, some class members were among the very last of steam locomotives to be withdrawn. By 1961 there was only a trio left on the Liverpool Street to Norwich line, ''Type 2'' diesels of the pilot scheme having arrived in force. The doyen of the class, ''Britannia'', survived in operational service until withdrawal in May 1966, but classmate No. 70013 ''Oliver Cromwell'' lasted in BR service right up until 11th August 1968, its last task of which was hauling an enthusiasts' special (''15G'') train in Norfolk. BR's last steam locomotive was officially withdrawn, on paper, in the following September.

With thanks to Chris Hicks for information concerning Nos. 70004's and 70014's Kentish Town Shed transfer. 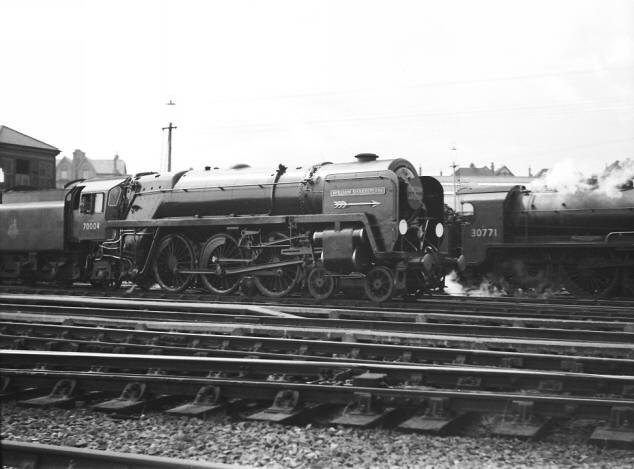 ''Britannia'' class No. 70004 ''William Shakespeare'', one of the pair allocated to Stewarts Lane, is

depicted at Folkestone Junction in 1954, wearing its usual Golden Arrow regalia. The cab of N15

''King Arthur'' Class No. 30771 ''Sir Sagramore'' is on show to the right of the engine. At Folkestone, the main locomotive which had brought the Pullman down from Victoria would usually be detached, and anything up to four ''R1'' class 0-6-0 tank engines would take the train down the harbour branch. On the return, the four tank engines could be seen slogging their way up the considerable gradient. Chris Hicks recalls that once transferred to the Midland Region, one of the ex-73A ''Britannias'' managed to part company with its tender and train whilst hauling a St Pancras to Manchester service at an estimated 80 MPH! © David Glasspool Collection 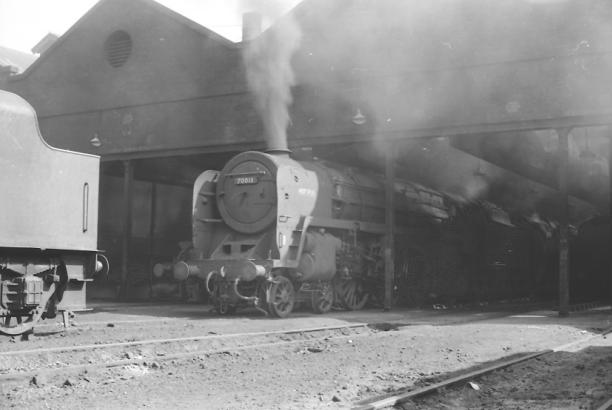 No. 70011 ''Hotspur'' is seen being fired up at 12A Carlisle Kingmoor shed in its later days. Originally, this locomotive was allocated to 32A Norwich Thorpe, and before the advent of the Type 2 diesels, hauled main line services between there and Liverpool Street. © David Glasspool Collection 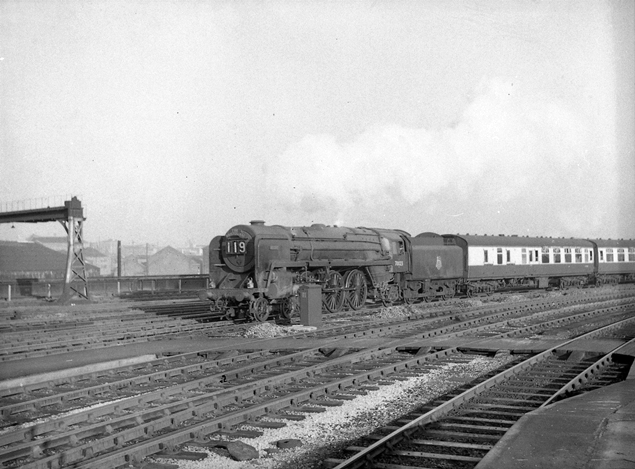 A grubby No. 70023 ''Venus'' is seen coming into Bristol Temple Meads in the 1950s with ''The Bristolian'', formed of crimson and cream BR Mk 1 carriages. This named train service had been suspended on the outbreak of World War II, the title not reappearing in timetables until 1951. No. 70023 ended its days at Carlisle Kingmoor, being withdrawn from there in December 1967. © David Glasspool Collection 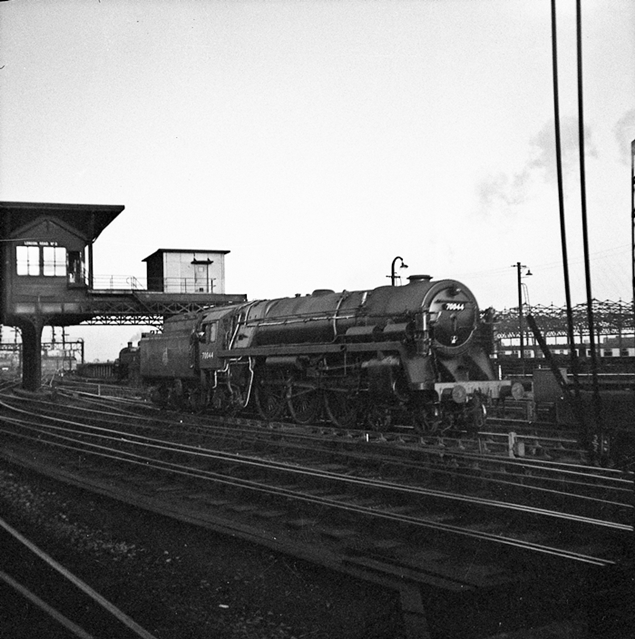 Looking peculiar without smoke deflectors, No. 70044 is seen at Manchester London Road (today called Manchester Piccadilly) in about 1954. This was one of two ''Britannias'' which was fitted with twin front-mounted Westinghouse pumps, the other being No. 70043. These provided the locomotives with air-braking as part of a trial to compare this set-up with vacuum-braking methods, and the engines were mostly employed between Toton and Brent on mineral trains. No. 70044, built in 1953, had this set-up for two years, after which it was converted to the standard Britannia configuration, receiving smoke deflectors and the name ''Earl Haig''. © David Glasspool Collection