The first station to serve Bromley was that of the LC&DR’s, which had originally opened as part of the Mid-Kent Railway on 5th July 1858. At the time, the SER’s network was still in its early stages; there were no Dartford Loop or Bexleyheath lines, and the company’s trunk route to the Kent Coast continued to be the line via Redhill. The North Kent and Mid-Kent Lines were, however, in evidence by this time. It was the LC&DR’s completion of its main line to Dover in July 1961 which spurred the SER to seek approval for the construction of a cut-off line, to bypass the Redhill detour and link up with its existing Kent Coast route at Tonbridge. The then new cut-off line, twenty-four miles in length and passing through Orpington and Sevenoaks, would shave 12½-miles off the existing London Bridge to Tonbridge distance, and authorisation for its construction was received on 30th June 1862. The route was opened to passengers as far as Chislehurst in the east on 1st July 1865; freight commenced along the line for its entirety on 3rd February 1868, with passenger services being extended to Tonbridge on 1st May of the same year. North of Orpington, Chislehurst existed as the only intermediate station; a staggered platform arrangement at Grove Park did not come into use until 1st November 1871, at the request of a local landowner.

The SER’s incursion into the LC&DR’s ‘’territory’’ at Bromley began in 1874, with the formation of the nominally independent ‘’Bromley Direct Railway’’. The concern proposed constructing a diminutive branch line, 1½-miles in length, diverging from the Tonbridge cut-off line at Grove Park. The line came into use on 1st January 1878, being double-track from the outset and feeding off both ‘’up’’ and ‘’down’’ lines of the cut-off route. Despite the branch’s decidedly short length, it was host to an intermediate station from the outset – that of Plaistow (now named ‘’Sundridge Park’’). As per Grove Park, a set of platforms here had been established at the request and expense of a local landowner, and the site was a mere 750 yards from the end of the line. By the time construction of the branch line had commenced, the SER had entered its ‘’economical’’ era of station construction, when buildings were erected at modest cost. This approach was achieved by the extensive use of wood in main structures, a practice successfully pursued by the company on the 1866-opened Dartford Loop Line. To distinguish it from the older LC&DR site, the branch’s terminus opened as ‘’Bromley SER’’, and the station was in keeping with this company’s character. A pair of brick-built platform surfaces, directly in-line with each other, were separated by a triple track, the latter of which terminated at a turntable. The main building was positioned on the ‘’up’’ (western) platform: it was an elongated single-storey affair, fabricated from tongue-and-groove timber, and featured a trio of brick-built chimneystacks emanating through its pyramid-shaped slated roof. Attached to its road-facing façade, over the doorway, was a diminutive porch canopy, identical in design to the examples which still grace the clapboard building at East Farleigh. The ‘’up’’ platform was protected by a mildly upward-slanting canopy, again attached to the main building and featuring the trademark SER clover-patterned valance (which is still in evidence at Maidstone West). The opposing eastern platform was host to a timber waiting shelter, this being approximately half the length of the main building, but still commanding the same design of canopy valance, albeit with a more severe slant. No footbridge was in evidence here, and passengers traversed between the platforms by means of a track foot crossing, positioned at the southern extremity of the surfaces.

Typically, branch line termini were host to their own engine sheds, to stable locomotives overnight. The SER’s Bromley station lacked this feature; the short nature of the branch, combined with its close proximity to Bricklayers Arms and Cannon Street engine sheds, probably negated any requirement for such a facility. A water tower was, however, in evidence: this was positioned, in the company of a water column, just beyond the end of the ‘’down’’ platform, being two storeys in height, with a base constituted of crème brickwork. Goods traffic was, too, accommodated here, and five northward-facing sidings terminated in a spacious yard to the west of the platforms. Two of these ran behind the ‘’up’’ platform, terminating in dock line fashion. The council used a sixth siding, at the western extremity of the site, this being gated off from the rest of the yard to indicate it was a private affair; a seventh track terminated behind the eastern platform. The station even came complete with a dedicated goods office: this was housed within a single-storey structure beside the main building, and its design was based on that of the SER signal box family, incorporating the trademark sash-style windows. Finally, the entire layout was controlled by a three-storey high SER-designed all-timber signal cabin, located to the north of the layout, beside the ‘’down’’ line. As per the aforementioned goods office, this featured sash-style windows and, unlike the former, a pyramid-shaped roof.

The SER formally bought out the original Bromley Direct Railway Company on 21st July 1879. When the station came under the Joint Management Committee of the SE&CR, the layout remained largely unchanged, but a grounded ex-four wheel coach body appeared beside the station approach road, to provide additional covered office space. On 1st July 1899, the suffix ‘’SER’’ was replaced with ‘’North’’ – the ex-LC&DR station acquired a ‘’South’’ suffix. By the time the Southern Railway took control, Bromley North was a rundown terminus, consisting of what appeared to be a hotchpotch of wooden buildings, covered in copious amounts of grime. Consequently, in 1924, the company initiated a comprehensive rebuilding of the site. The existing station was first converted to single platform operation, by keeping open just the ‘’up’’ side surface during the rebuilding works. This enabled demolition of the ‘’down’’ side, the site of which would later become host to the SR platform. The water tower and turntable were also very early casualties of the rebuilding programme; their sites were required for the erection of a brick-built station structure, end-on to the tracks. A water column was, however, maintained at the southern end of the remaining ‘’up’’ platform during the works. The rebuilding was completed in December 1925, which allowed the existing ‘’up’’ side structures of the SER establishment to be demolished, to make way for a revised goods yard. The result of the works was a grand affair that made the branch appear more important than it in fact was. A single platform surface of two faces, constituted of Exmouth Junction-manufactured prefabricated concrete components, was brought into use. Some 520-feet in length, it was protected for part of its extent by a 260-foot-long riveted steel canopy, this being identical in design to the example which was installed on the island platform at Herne Bay in 1926. In seemingly main London termini tradition, the station boasted a completely covered light and airy concourse, measuring 60-foot wide by 40-foot down and arranged in the form of three glazed pitched roof sections. Finally, this was backed at the rear by the main station building, which was divided principally into two sections. The structure was built to the same general design as those main buildings which appeared at both Broadstairs and Dumpton Park stations during 1926. Brown brick construction was used throughout, complete with stone edging. The main booking hall was equivalent to three storeys in height, and was built on a floor plan of 60-foot across by 40-foot down. Demonstrating a grand stone-lined arched entrance, the building incorporated a large pyramid-shaped slated roof, graced with the then popular belfry (a feature, again, shared by Broadstairs and Dumpton Park stations). Extending from the booking hall’s western elevation was a V-shaped 70-foot long single-storey appendix. For much of its length this section of building was let out for private retail use, a practice certainly not unheard of on the SR network; the rebuilt Exeter Central station, on the South Western Section, also incorporated shops in its façade. 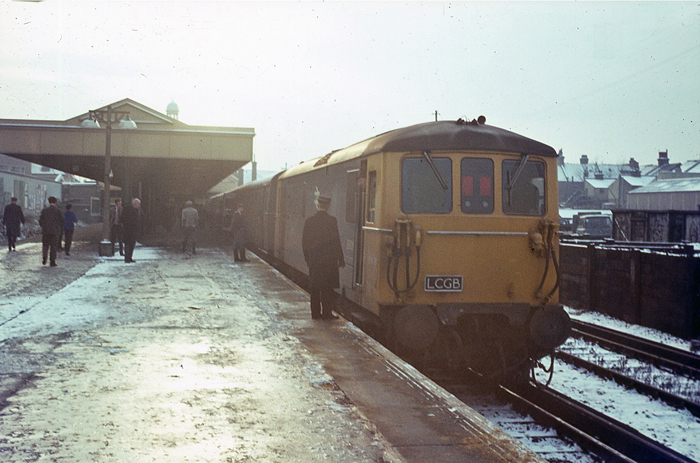 Electro-Diesel No. E6018 (later Class 73 No. 73112) was seen at the terminus, fronting 4TC set No. 424 on a tour organised by the Locomotive Club of Great Britain (LCGB). The next stop was Cannon Street, where Type 2 No. D6584 (later Class 33 No. 33064) would take over. On the right can be seen the electrified run-a-round loop, whilst in view on the platform is a typical Southern Region concrete bracket lamppost. © David Glasspool Collection 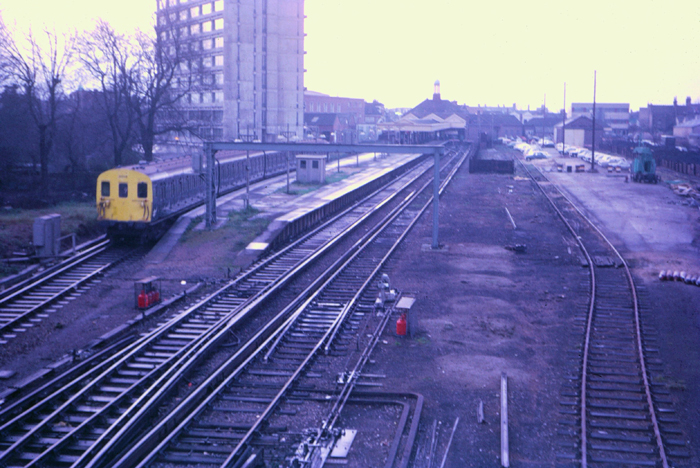 This south westerly view from 1970 includes many features which have long since gone. A Bulleid-designed 4 EPB is seen departing the terminus, the platform of which is adorned with concrete bracket lampposts sporting hexagonal lampshades. In evidence is the electrified loop, complete with catchpoints and, on the right, the spacious goods yard. The latter still retained its brick-built shed and coal pens, although the area was mostly used for car parking by this time. © Tom Burnham 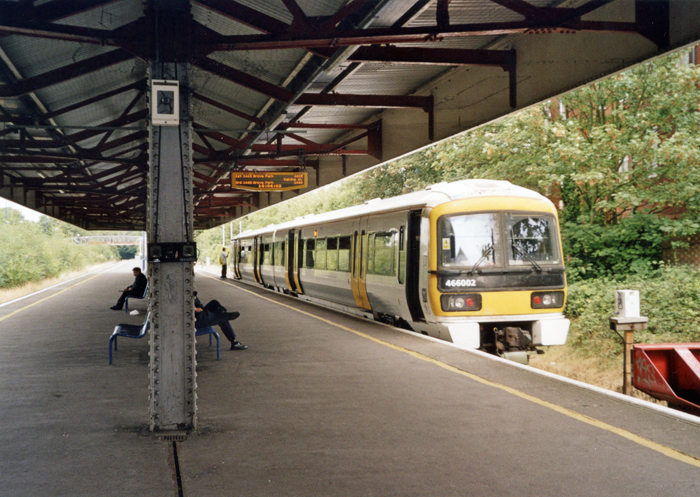