This was a class of just two units, which formed a very novel attempt at tackling overcrowding on South Eastern Division suburban lines. In the immediate post war period, the newly-formed Southern Region faced an expensive rolling stock renewal programme and platform lengthening exercise. The former was required to replace numerous electric units destroyed during World War II bombing, in addition to those existing types which were reaching life expiration. With reference to platform lengthening, this alone was priced at £10,000,000 (£271,000,000 at 2009 prices). In 1948, the Chief Mechanical Engineer of the former Southern Railway, Oliver Bulleid, proposed a double-decker train as a potentially cheaper solution to increase passenger capacity on commuter routes. In February of the following year, a mock-up of a double-decker carriage was put on display at Marylebone station (which had become the headquarters of British Railways). The arrangement of two levels of seating was interesting, for the existing loading gauge precluded development of a double-decker unit in its true sense. Essentially, a ‘’one-and-a-half’’ decker unit had been proposed, which featured alternating high and low seating compartments along the length of each vehicle.

A single working prototype double-decker carriage was completed at Lancing Works early in 1949 (not necessarily that displayed at Marylebone), and it was announced that it would be tested in South East London later in the year. In September 1949, trials commenced using a complete four-vehicle double-decker unit on the North Kent routes between Dartford and Charing Cross. Subsequent trial runs involved operating at increased speeds, after which the vehicles were checked for faults. A second four-carriage double-decker emerged from Lancing Works in the following October, and the units went into revenue-earning service on 2nd November 1949. The ‘’4 DD’’ units (DD for ‘’Double-Decker’’) survived in use for just a single day, surely a record, before they were despatched back to Lancing for modification. Re-emerging in the latter half of November for a paltry five days of further passenger service, the units were resigned to the works for the rest of the year – one of the units had suffered a cracked iron tyre. The pair did not resume service until 6th January 1950. Bulleid had since left BR in the previous September, transferring to ‘’Coras Iompair Eireann’’ (Irish State Railway) in Dublin, to work as Consulting Mechanical Engineer.

The units were numbered 4001 and 4002, and the livery from the outset was all-over unlined Malachite Green. The ground floor compartments were equipped with sliding opening windows as per those found on standard locomotive-hauled and EMU carriage stock. Conversely, the upper compartments featured fixed windows as a result of tight tunnel clearances, but to compensate a pressure ventilation system, controlled by the Guard, was installed. The body shells were of all-steel construction and each unit was equipped with four 250 HP English Electric 507 motors (as later fitted to the EPB fleet), divided equally between the two driving vehicles. Westinghouse Electro Pneumatic Braking was fitted, and the sets had a top operating speed of 75 MPH.

In spite of early teething troubles, the pair of 4DD units had their advantages. Generally, they were coupled together in service as an eight-vehicle train, thus provided a total of 1,104 rock hard seats. This compared favourably against the highest capacity eight-vehicle single-deck formations of 772 seats, or ten-vehicle formations with 945 seats. The interiors of the compartments were mostly fabricated from plastic, and access to the upper floor of seats was by means of a centrally-positioned staircase leading from the lower floor. Indeed, the comparatively large dimensions of the units limited them to the North Kent routes, and the fact that two compartments – upper and lower – were both served by just one door at the platform side meant that loading/unloading times were long. These factors brought to an end the construction programme, and in December 1950 it was decreed that the 4DD Class would not go beyond two units. Instead, the expensive platform lengthening exercise was pursued after all, combined with a procurement of new electric multiple units. Platform lengthening occurred along Bexleyheath, Sidcup, and Woolwich lines in 1954, 1955, and 1957 respectively. New EMU stock in the form of 2-EPB and 4-EPB units was delivered to Central, South Western, and South Eastern Divisions from 1951 onwards, the fleet forming part of the ten-car train scheme on the latter.

Around 1965, small yellow warning panels were applied to the cab fronts and circular BR emblems appeared on the sides of the motor vehicles. By the end of the decade, the units were wearing full yellow ends. Although long station dwell times – particularly at London Bridge – and a limited route availability had stopped production beyond two four-vehicle examples, these units settled down to provide over two decades of service on the North Kent routes. In 1971, which ultimately became their final year, the pair were repainted in all-over BR Blue and renumbered 4901 and 4902. After running over 700,000 miles between them, they were taken out of service on 1st October 1971. No. 4901 was sold for scrap, but most of No. 4902 managed to creep into preservation, going initially to the South Eastern Steam Centre at Ashford. One of the trailers had earlier been scrapped, but two driving vehicles and a second trailer (No. 13503) remained in existence. The former Ashford engine shed area was rented from British Rail for the steam centre, amongst the derelict remains of the depot buildings. Unfortunately, the two bodies clashed over unpaid rent, and 4DD trailer No. 13503 was tragically cut up in lieu of money owed. Such money issues saw the closure of the South Eastern Steam Centre in 1984, and the remaining driving vehicles of unit No. 4902 were dispersed to separate owners. Vehicle No. 13003 is reportedly decaying on a farm in Sellinge, near Ashford; No. 13004 was eventually taken up to the Northants Ironstone Railway in 1999. Admittedly in better condition, the latter also awaits a full restoration. 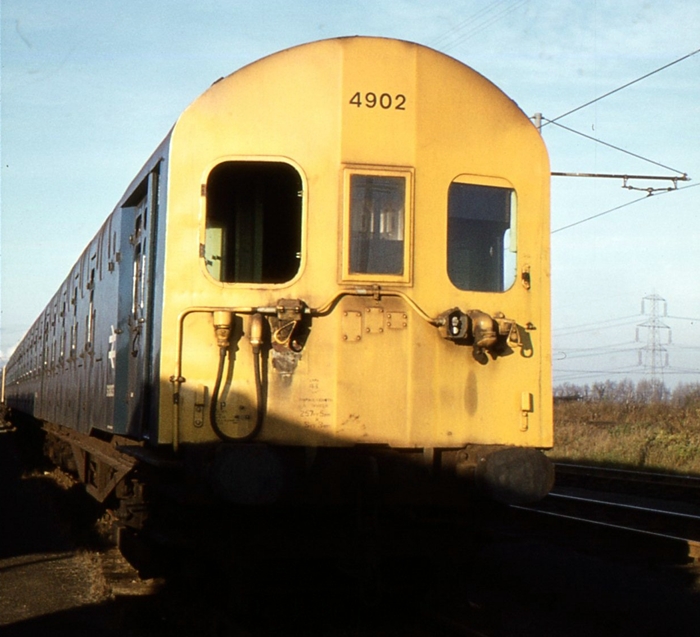 No. 4902 is seen in the ''up'' yard at Hoo Junction after withdrawal, a location where much obsolete stock was scrapped. Thankfully, this was not the case on this occasion and No. 4902 would later be taken down to the former steam engine site at Ashford. Note the overhead wires at the top right, for use by the Class 71 locomotives. © Roger Goodrum 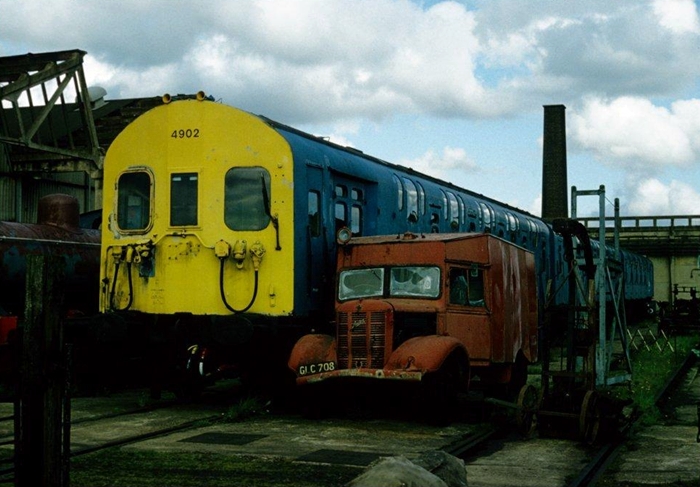 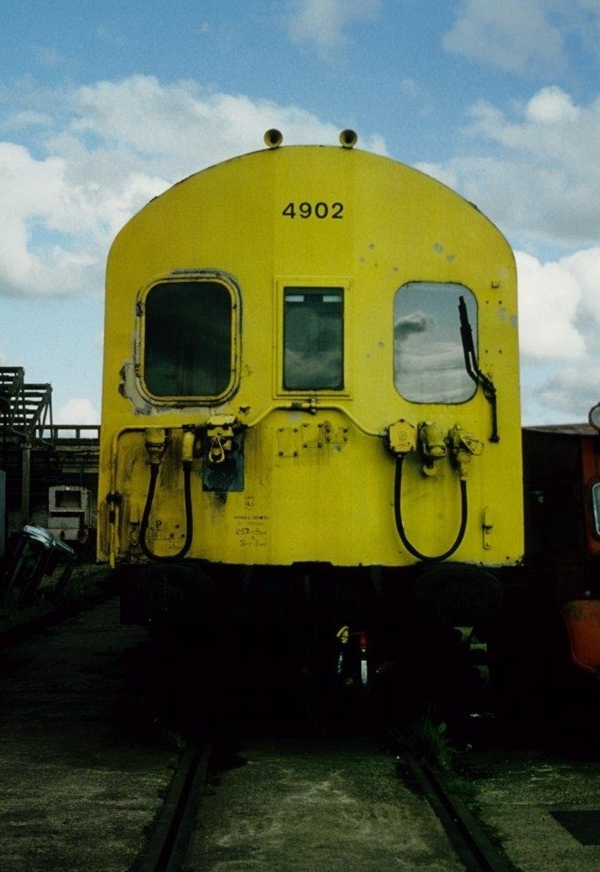 The cab fronts of the 4 DD class were very similar in appearance to the 4 SUB units built from 1946 onwards. Sandwiched in-between the two cab windows is the roller route indicator blind. © Wayne Walsh 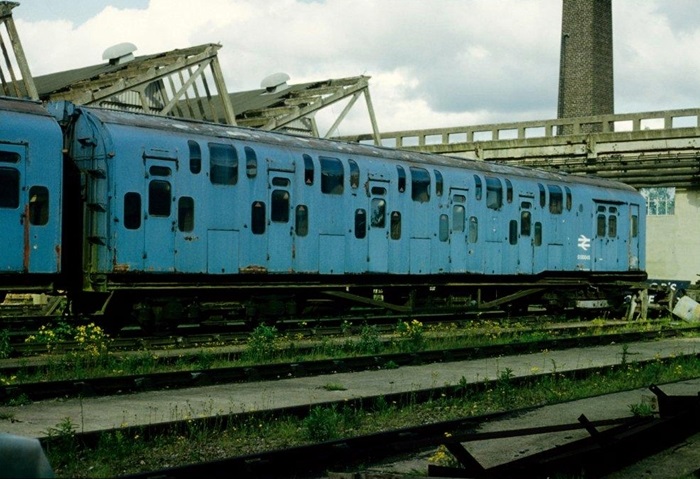 The curvature of the top deck windows can be appreciated in this side view of driving vehicle No. 13004. The compartments were once illuminated by filament strip lamps. Note how the body side drops to a lower level after the Guard's compartment, to meet the floor line of the first compartment door. Naturally, there were no gangway connections between vehicles and no internal corridors. © Wayne Walsh