Charlton came into use with the original North Kent Line on 30th July 1849. Ideally, the SER would have preferred extending the line hereafter by tunnelling underneath Greenwich Park, to reach the terminus of the London & Greenwich Railway (L&GR). However, opposition from the Royal Observatory prevented this, thus the circuitous route via Blackheath and Lewisham was assumed. The station at Charlton was very similar to nearby Woolwich Arsenal in constitution: the main structure, two-storeys high and featuring a pair of pitched roofs, featured on the ‘’up’’ side. There was no building present on the ‘’down’’ platform, but instead a vertical wall was in evidence, this of which supported a rectangular platform canopy - the latter was replicated on the ‘’up’’ side. Although two platform faces were in use from the outset, no footbridge between the pair was provided, a track foot crossing being in use for nearly a quarter of a century. Another, quite unusual absence from the site, was that of goods facilities. However, the station could lay claim to a signal box, this being positioned just beyond the western end of the ‘’up’’ platform.

Significant progress was made with providing a connection with the original L&GR, after the Royal Observatory relaxed its restrictions. A double-track spur between Charlton and Maze Hill came into use on 1st January 1873, this being followed by a single-track connection with a rebuilt Greenwich station on 1st February 1878. In conjunction with the 1873 works, significant layout revisions were made at Charlton. These included the lengthening of the ‘’down’’ platform at its western end to allow the incorporation of a bay line on its northern elevation, thus providing a total of three platform faces. Two sets of crossover tracks were also installed immediately west of the station, joining the two routes; these also allowed right-hand running trains from the Greenwich line to assume the more customary left-hand running beyond Charlton. Good facilities were brought into use at this time, although these merely consisted of a single westward-facing siding on the ‘’down’’ side, this of which terminated on the same longitude as the end of the platform. The station name boards had acquired a ‘’Junction’’ suffix during the 1873 opening of the Maze Hill extension, although a junction had already been in existence a third of a mile west of the platforms since 1852. Here, the single-track to Angerstein Wharf branched off, but the point of divergence had already been named ‘’Angerstein’s Junction’’. Finally, the station acquired an attractive covered footbridge during the 1873 modifications, this being positioned immediately west of the platform canopies, and the original signal box remained unaltered.

The scene at the station was set to change under the SE&CR: in 1905, the company entered a contract with W Patterson & Sons for the rebuilding of Woolwich Arsenal station and the implementation of significant alterations at Charlton Junction. At the latter, this included the provision of a ‘’high-level’’ entrance straddling the tracks at the eastern extremity of the platforms. Located alongside the road bridge, the structure also provided an alternative passage between the platforms over the covered footbridge of 1873. New passenger waiting accommodation came into use on both platforms, to the west of the footbridge, each side now being host to single-storey brick-built shelters. The canopies were extended westwards accordingly, to provide platform cover for these. Finally, the original signal box was demolished and replaced by a two-storey structure on the same site, this being three times its length and of all-timber construction. Despite the signal cabin being built under SE&CR auspices, the design implemented was still that of the erstwhile independent SER. The cabin now controlled a larger layout: an additional terminating track had been laid immediately parallel with the bay line, and a third came into use just north of this. Lastly, an eastward-facing siding was laid alongside the ‘’down’’ track of the Greenwich line, having a direct connection with the original goods siding of 1873. It is worth noting that the original ‘’up’’ side station building survived the partial rebuilding, this of which was completed in 1906.

In 1926, the Southern Railway electrified the line, which saw the emergence of the station site’s most imposing structure. A three-storey high red-brick substation appeared on the ‘’down’’ side, at the end of the original single-track siding of 1873 (which, until this time, was the site of the station’s coal depot). Interestingly, this siding was extended into the building, which appears to be a unique arrangement – at least on the South Eastern Division. In conjunction with the electrification, the company also modernised the design of platform gas lamps, a common occurrence at those stations on the then newly electrified ex-SE&CR suburban lines. Unfortunately, the station was to experience devastation during a World War II bombing campaign of 1944, and much historical interest would be lost. On 23rd June of that year, one of the dreaded flying rockets crashed on the site, 2000 lbs of explosives detonating on impact, virtually destroying the whole station. The only structures to survive the attack were the signal box of 1906 and the substation of twenty years later. It was only in 1955 that any form of revival for the station emerged, this being instigated by the need to extend the platforms for ten-car EPB formations. These were subsequently lengthened at their western ends using Exmouth Junction-manufactured prefabricated concrete; the bay platform ceased to be at this time, the ‘’Junction’’ suffix was dropped, and the ‘’up’’ platform now went beyond the signal box. The works, completed in 1957, also brought electric lighting to the station, and a V-shaped metal canopy appeared on each platform, complete with a metal footbridge immediately to the west.

The 1960s was a decade of yet more change, again for the worse. This began with the withdrawal of goods facilities on 20th May 1963. In the latter years of the decade, a number of stations along the line were subject to ‘’modernisation’’, which fundamentally saw many historic structures replaced by the uninspiring CLASP modular ‘’architecture’’. In Charlton’s case, all historic remnants - bar the signal box - had been obliterated during World War II. In 1968, a two-storey CLASP abomination appeared at the eastern end of the ‘’up’’ platform. The footbridge of 1957 was dismantled and a new one, again of the CLASP design, erected in-between the ‘’up’’ side main building and the platform canopies, providing both sides with direct connections to the road bridge. Furthermore, an additional rectangular waiting shelter appeared on the ‘’up’’ side, just to the west of the canopy. The delightful signal box, at the western end of the ‘’up’’ platform, remained, but its continued existence was to be short-lived: on 15th March 1970, its functions passed to the St Johns Panel on the commissioning of colour aspect lights.

For many years the station remained in its dreary 1968 state and indeed, all of the structures from this year are still in existence. However, in 1999, it was decided to give the station a ‘’Millennium Dome’’ theme by the erection of a 90-foot long tent-like cover on the ‘’down’’ side, perpendicular to the platform. Also, on the ‘’up’’ side, a new lift was installed, this being built within a two-storey high crème brick tower, adjacent to the CLASP station building. Finally, the CLASP sides of the footbridge were replaced with metal railings, concluding the many transformations witnessed at this station. 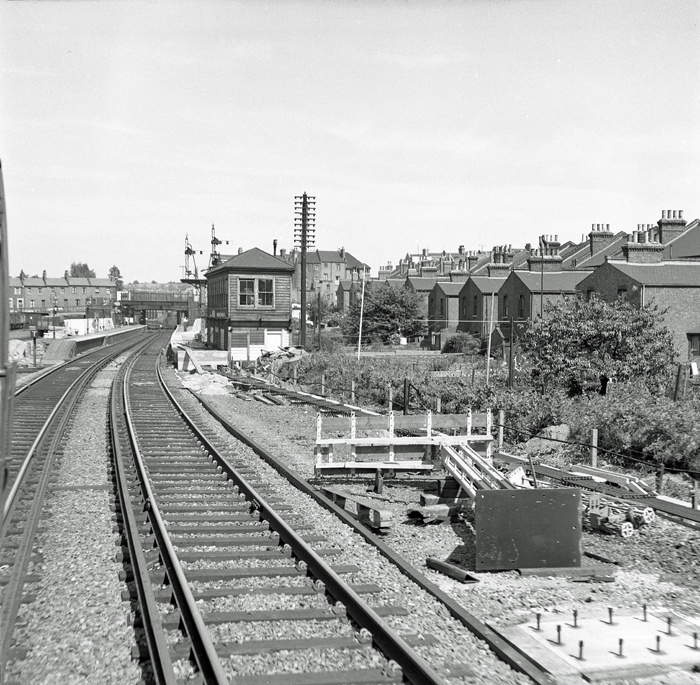 A view from a Dartford-bound train shows, on the right, a new triple-arm semaphore signal post awaiting installation. It was due to replace that seen in the background, beyond the signal box, as part of the scheme to lengthen platforms at their western ends for ten-coach train formations. A. Jackson © David Glasspool Collection 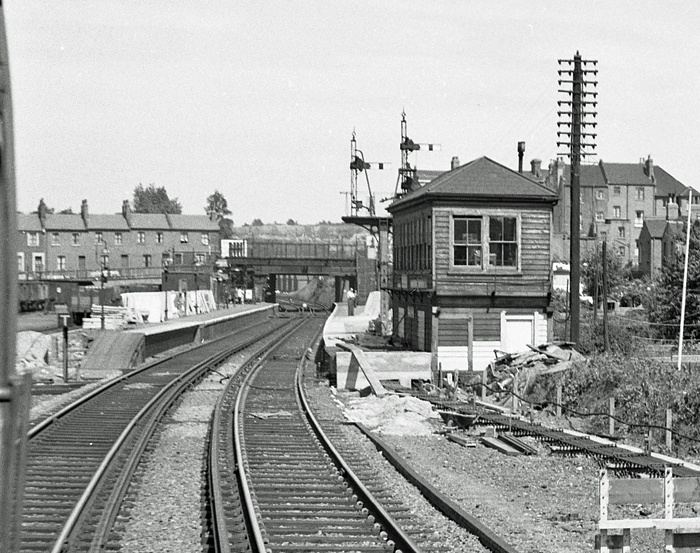 Zooming in on the previous photograph, a closer look at the station layout is afforded, looking away from London. Goods wagons can be seen in the "down" sidings behind the platform. Note the rodding emanating from the signal box, passing through a temporary timber screen, which led to the junction points. In the background can be seen the footbridge installed between the platforms after the destruction of the "high-level" station building in 1944. Swan neck lamps are in evidence on the "down" platform, and repainting of the signal box had just started. A. Jackson © David Glasspool Collection 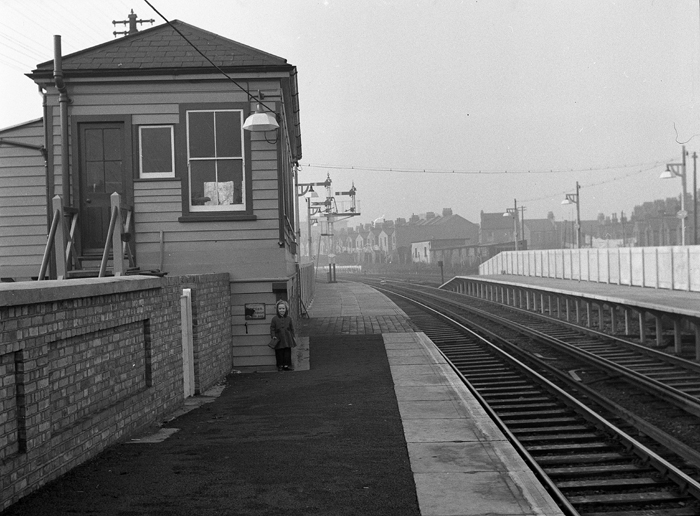 This westward view shows a superb collection of bygone features which are now long gone. Prominent on the left is the newly-painted SER-designed signal box, an all-timber structure which remained in use until March 1970, whilst beyond is the semaphore signal post for the junction between Lewisham and Greenwich lines. The signal post was only a few months old; as the first picture on this page shows, it replaced a previous semaphore bracket located east of the signal box as part of platform lengthening works. The junction points formerly sat in front of the signal box, but prior to the advent of the prefabricated concrete platform extensions in view - completed in the year of this photograph - these were moved 120 yards west. This photograph was taken during rebuilding of the bomb-damaged station, the works of which included the provision of electric lighting upon concrete bracket lampposts, as seen here. A. Jackson © David Glasspool Collection