This station was a later addition to the former London Chatham & Dover Railway route to Thanet, being opened after the Grouping by the Southern Railway on 6th July 1930. Originally known as ''Swalecliffe Halt'', it later became ''Chestfield & Swalecliffe Halt'', then just ''Chestfield'' in 1987. This again reverted back to ''Chestfield & Swalecliffe'' in 1989. The trend of opening latterly-conceived halts was pioneered by the earlier SE&CR, Beltring & Branbridges on the Medway Valley line and Stone Crossing on the North Kent Line being relevant examples of the era. The SR continued with opening then new stops at Aylesham in 1928 (to serve the colliery village) Swalecliffe in 1930, and the rebuilding and moving of Swanscombe Halt on the North Kent Line also in that year. Typically, these builds featured concrete platforms - manufactured by the railway company itself - and economical wooden waiting shelters.

For a halt, the passenger facilities provided at Chestfield & Swalecliffe were not at all bad: at its peak, there was a timber ticket office at the London end of each platform, and a copious timber waiting shelter also featured on either side. The latter were enclosed, complete with windows, a door and, at least in the earlier years, a coal fire for those cold winter days! Access to the platforms was gained via a flight of concrete steps and a wooden ramp, positioned in-between the ticket office and waiting shelter on either side. The 1970s marked considerable change at this station: the prefabricated SR concrete platforms were rebuilt using bullhead rail as the supports, and wooden planks as the surface. The opportunity was also taken at this time to move platform access from in-between the shelters and ticket offices, to the London end of the layout, beyond the latter structures. The foundations of the old entrance staircases can still be seen today, if one carefully observes the site through the brambles. The then new wooden planked platforms could break the boredom when waiting for a train: a solid ice coating on a frosty morning would allow the bold to skate! This was no longer possible from 1998 onwards, when an asphalt surface was laid over the wooden planks (excepting the most outer planks, painted in white). Even greater change had occurred previously, however: the ''down'' side ticket office suffered fire damaged in 1989, caused by local yobs, and in 1991 this and the delightful clapboard waiting shelters (which had since lost their doors and windows) were demolished. The destroyed ticket office was formerly twice the size of the remaining ''up'' structure, and even had a cooker inside. The clapboard structures were unsurprisingly replaced by the then (and seemingly now) customary glazed bus shelters. Palisade fencing arrived in 2003, this simply surrounding the aforementioned bus shelters. Indeed, poor fortunes for this station, even more so considering the fact that local yobs still hang around it at night.

With thanks to Darren Cafferty for providing information on the platform surfaces. 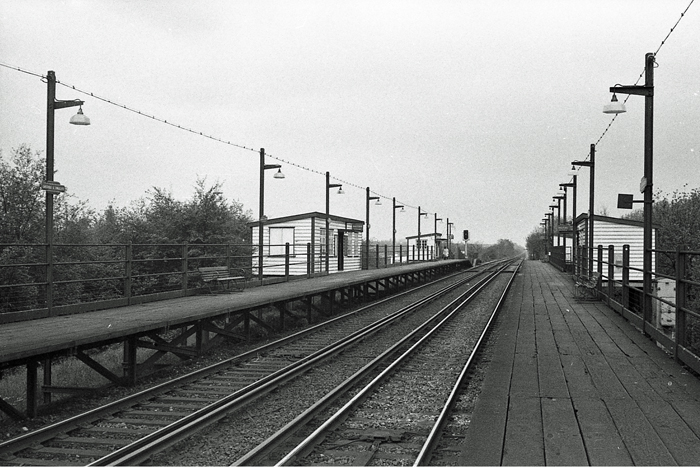 In this westward view, the sizable timber buildings nearest the camera on either platform were waiting rooms; the smaller structures beyond were ticket offices. By this time, the platforms and lampposts were built from old rail, and the former's surfaces were made of timber planks. "Sausage" Totems and hexagonal lampshades were still in evidence, as was a staff track foot crossing between the ticket offices. © David Glasspool Collection 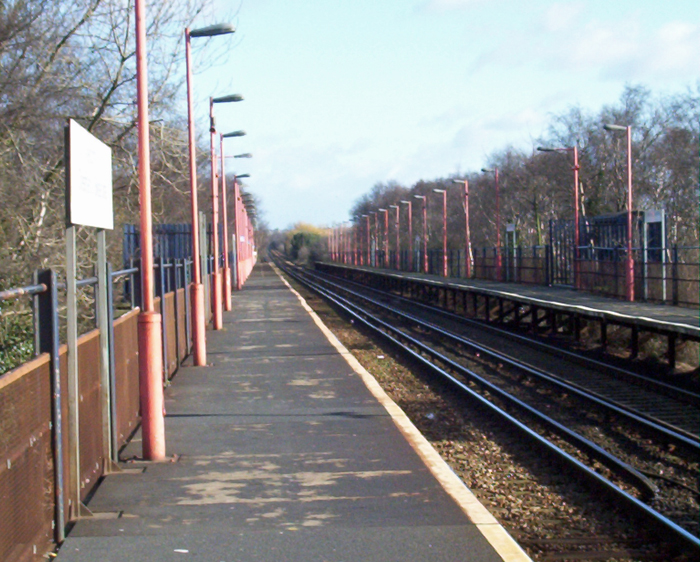 An eastward view shows that the generous timber waiting rooms had gone and, in their place, small glazed shelters installed, these of which were lined on three sides by palisade fencing. The timber planks of the platforms were now underneath a layer of asphalt. © David Glasspool 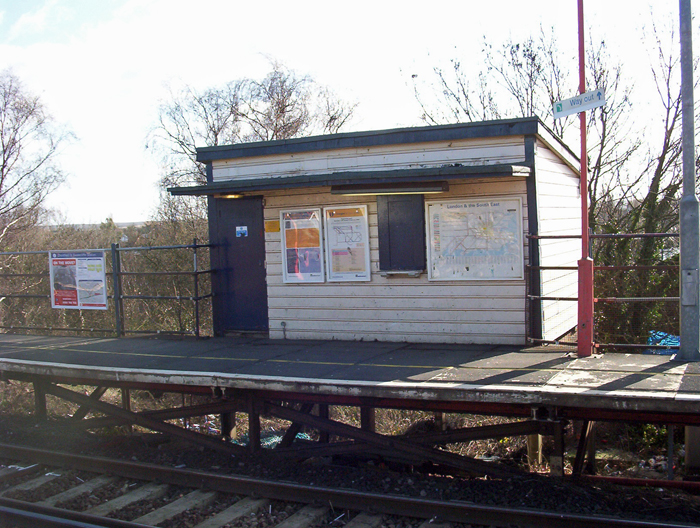 In view is the "up" side ticket office, the last structure remaining from 1930. Both platforms are over 800-feet long. © David Glasspool