The requirement for what would later be classed as a ''Type 3'' locomotive was timely for English Electric, whom had a proven history and tradition of developing successful diesel and electric locomotives for the export market. One of the company's export successes was their African diesel, a notable user of the type being ''East Africa Railways''. All the fundamental components such as the engine, generator, traction motors and control gear had proven robust in the most extreme of conditions and a locomotive availability of 93% was achieved. A 2024 HP-rated diesel engine was incorporated into the locomotive, which was designed to produce 1840 HP when working on terrain 9000 foot above sea level. When the British Transport Commission began searching for companies to build a batch of Type 3 diesels, English Electric was able to offer a powerful, tried and tested design, built by engineers with considerable knowledge and experience in the field. Without further hesitation, the company was awarded a contract in 1959 for the construction of forty-two locomotives based on the African design, but incorporating a de-rated engine - a 1750 HP power plant was selected rather than the existing 2024 HP engine. Many of the internal components were also based on the same designs as those which were incorporated within the Class 40, allowing production to be quicker and the cost to be lower. Construction of the type began at the Vulcan Foundry in Newton-le-Willows in Lancashire. This company had been working with English Electric on diesel and electric locomotives since 1946 and had been incorporated into the latter in 1955. As a result of British Railways' avidness to eliminate steam traction as soon as possible, several repeat orders were placed until eventually, 309 of the type had been ordered since the first contract was issued.

The Vulcan Foundry was working at full capacity on this large order and much of the work was subcontracted to Robert Stephenson & Hawthorne at Darlington, where factory space was available. The first locomotive to be completed was No. D6700, and on 2nd December 1960, it was officially allocated to Stratford (30A). The last of the class, No. D6608, was delivered in November 1965.

Weights of locomotives varied within the batches:  Nos. D6700 to D6819 came in at 102 tons 12 cwt, whilst the latterly built Nos. D6820 to D6999, and D6600 to D6608, were instead 105 tons 1 cwt. However, all builds were fitted with Clayton RO 2500 steam heat boilers, although numerous locomotives saw these either removed or isolated from the outset – these examples were subsequently dedicated to freight. All of the Type 3s were fitted with nose-suspended English Electric 538/1A traction motors.

Whilst East Africa Railways was able to attain a 93% availability of their locomotives, BR struggled to better 85%. English Electric (EE) incorporated the same Co-Co bogies (CP7) within the Type 3 as they had in the contemporary ‘’Deltic’’. Therefore, on a Class 37 bogie, one is able to observe the fittings for the Deltic's cab steps, and vice-versa, the bogies being interchangeable between the classes. Both such diesels also demonstrated the company’s affinity for locomotive ‘’noses’’ jutting out from either end. An EE trademark, the definitive reason why noses were incorporated into diesel builds is not known. There are some suggestions that the noses were there to provide a form of crash protection, and other reasons outlining that this feature instead prevented drivers from being mesmerised by the track sleepers. Another equally valid argument suggests that EE acquired its inspiration from the design of American diesel locomotives, which had been in existence since the 1930s. These already demonstrated large end noses, but by the time the EE products appeared, American traction had been using flat fronts for a number of years. By the advent of the Class 50, BR had decreed that flat-ends on locomotives were compulsory.

The EE Type 3 diesels had a permitted top speed of 90 MPH, but worthy of note is a short-lived project pioneered by the Western Region. From 18th April 1966, the WR trialled a new high-speed service to reduce journey times between Paddington and Bristol. This involved modifying eighteen locomotives for 100 MPH running, and these would double-head on services. Evidently, the system was not a success, for it did not last beyond 1966. After its cessation, the services were assumed by a single Class 47 operating to the original 90 MPH speed limit.

Meanwhile, the Class 37 had set a new record, albeit dubious. On 17th December 1965, No. D6983 had collided with derailed Class 47 No. D1671, near Bridgend, the two having been hauling a dock freight and empty carriage stock respectively. Sadly, both drivers were killed in the incident and, consequently, the two locomotives were damaged beyond repair. No. D6983 became the youngest locomotive to be scrapped, being thirteen months old. Having first emerged in May 1965, it was subsequently cut up on 12th June of the following year. The Class 47 was scrapped in August 1966. 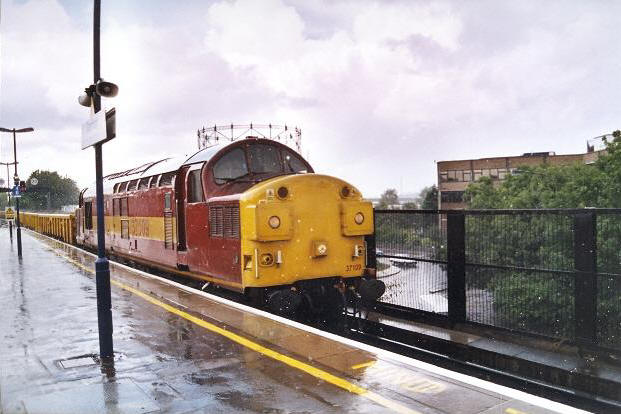 No. 37109 is seen passing through platform 4 at a very wet Dartford station as the rain beats

down, 12th August 2004. Wearing the EWS yellow and maroon livery, this locomotive was a

regular along the North Kent Line, being based at Hither Green Depot in its final years. The

locomotive spent much of its time running Hither Green to Hoo Junction errands, and this 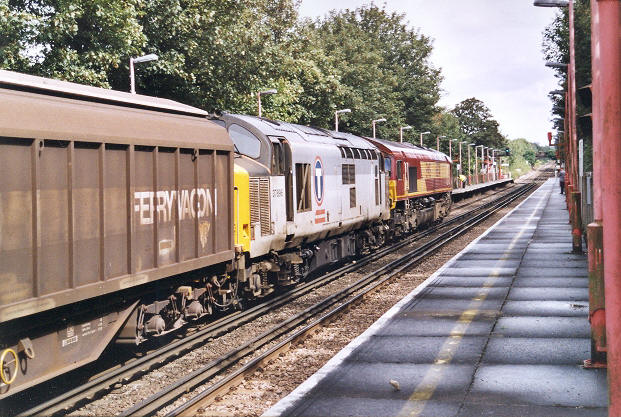 station on the North Kent Line, 12th August 2004. Interestingly, the locomotive is still in the two-tone

''T'ransrail'' grey livery which was applied from 1994 onwards, during the run up to privatisation. Note

how the weather has changed on the same day from the previous picture! David Glasspool 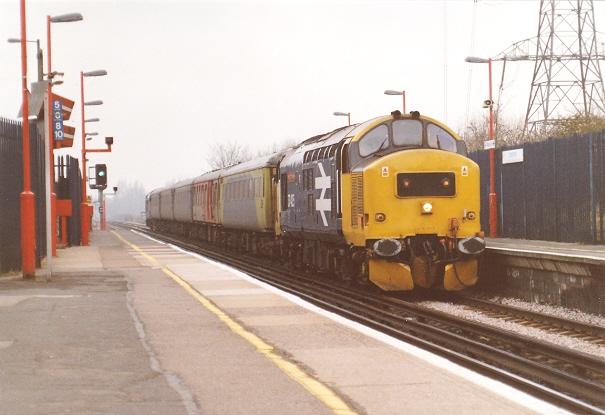 formation into the London termini and as far into Kent as Paddock Wood. David Glasspool