Typical rush-hour commuting into London from Kent is a mundane, frustrating and woeful experience, with the average commuter apparently experiencing more stress in a single working day than a fighter pilot. Trains lack the necessary capacity, and crowds of commuters standing in the gangways of carriages, blocking the sliding doors is an everyday occurrence. The comparatively recent introduction of Class 465/466 EMU's (the whole class was in service by April 1995) was to herald the beginning of a new age of comfortable and practical travel to and from the capital and was regarded as a huge step up from the former slam-door stock. The reality has been far from that. These units are pleasant enough during the off-peak and when not vandalised, but constant overcrowding and poor conditions within the type swiftly raised the topic of increasing the number of trains operating at any given time - or to increase train length. Platform lengthening at many South Eastern Division suburban stations had previously been done in 1992 to accept twelve-car trains, but despite this work, clearance to run formations of this length was never given. With the suburban network already running at full capacity, the concept of running more peak-time services was a non-starter.

A project known as ''Thameslink 2000'' had previously been proposed by Railtrack to relieve line congestion in the London Bridge area (the infamous bottleneck), increasing capacity and allowing for more efficient train movements. This new scheme was very long term and it did not solve capacity predicaments elsewhere, nor did it have the potential to reduce any noticeable amount of overcrowding on trains (plus, it still is yet to materialise!). Increase in train length was not an option and an increase in train movements was out of the question, therefore the solution laid with another new generation of commuter rolling stock. Eventually, in late 2002, the then franchise holder of South Eastern Division services, Connex, initiated a programme of how alleviate chronic overcrowding. Conveniently, this scheme could tie in with the procurement of new main line stock, whilst still producing a standardised fleet of commuter units.

The dimensions and internal layout of these new units would be crucial. It was generally accepted that not all demands for seating during the rush-hour could be satisfied and therefore it was decided to incorporate large standing areas within the new design, in conjunction with a spacious seating area. It was latterly stated that commuters would not be standing for more than 20 minutes on a typical journey, therefore the priority was mainly on the provision of practical standing areas. To satisfy both these needs, the new EMU body width would be substantially wider than that of the current Networker fleet, allowing for the much needed increased standing room and the provision of ''bus-style'' fold-up seats for commuters' convenience. The increased internal room would come at a cost of having no toilet facilities, which would be bad news for natural human needs, although it was believed that more toilet facilities could be provided on station platforms, eliminating the need for onboard lavatories. Whether this concept comes to fruition or not remains to be seen, particularly in light of the vandalism of toilet facilities which is noticeable at many stations. A Passenger Forum was also established to meet with Connex to discuss the design of the new unit, but it is still unclear as to how much influence this forum was able to exercise, and it is also not known how advanced the design stage already was at the time of discussion.

Similar to their ''Networker'' stablemates, the new Class 376 is fitted with no central gangway to connect passenger areas of two coupled units and therefore retains a large windscreen divided up into three glass panes. Automatic sliding doors are now fitted as standard on new rolling stock and there is no exception with the new Class 376: their mechanism differs from the previous Networkers by means of the doors sliding into the body sides, rather than sliding out externally. Their commuting tasks do not necessitate the high speeds associated with main line long distance trains, therefore the EMU's have been geared for a top speed of 75 MPH rather than a possible 100 MPH, improving their acceleration. Running the Class 376 scheme concurrent with the Class 375/377 project had the advantage of allowing standardisation to take place, parts between the two fleets being interchangeable. Although appearances of the two classes are deceiving, their electrical constitution is virtually identical.

All Class 376 units were projected to be in service by the beginning of 2005, the first deliveries having been in May 2004, and it was envisaged that loading time at stations would be faster as a result of the larger door area, reducing station dwelling times. The fleet's stomping ground has been outlined as the North Kent Line, Charing Cross to Orpington, and the Hayes branch. How these new units will weather and evade vandalism during service remains to be seen, although positive measures were being put in place by public sector train operating company ''South Eastern Trains'' to prevent unwarranted damage. On preparation of receiving the new units, Slade Green and Ramsgate Depots were receiving modest upgrades to deal with the new technology.

All the above workings were formed by two coupled units, thus ten vehicles long. 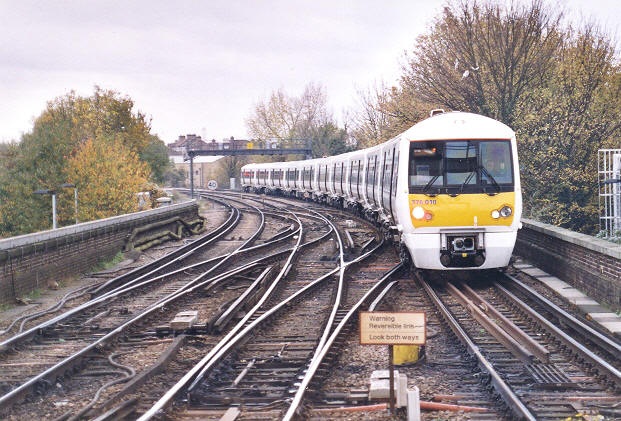 over the viaduct into Dartford station, bringing in a Charing Cross to Higham service. At this stage,

on the platforms at Dartford. The top speed permitted along this section of the ''up'' line is 40 MPH, whilst 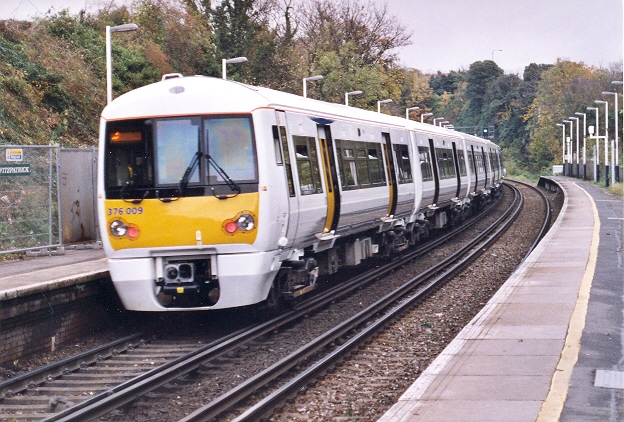 seen departing Greenhithe. These units certainly had their fair share of teething troubles when

displays. Official deployment of the type on the North Kent Lines, the Orpington line and the branch

to Hayes, was in May 2004, although they only began arriving in force in October of that year, despite

the type being put on display at Cannon Street in August. It remains to be seen whether the clean

appearance will be maintained. David Glasspool 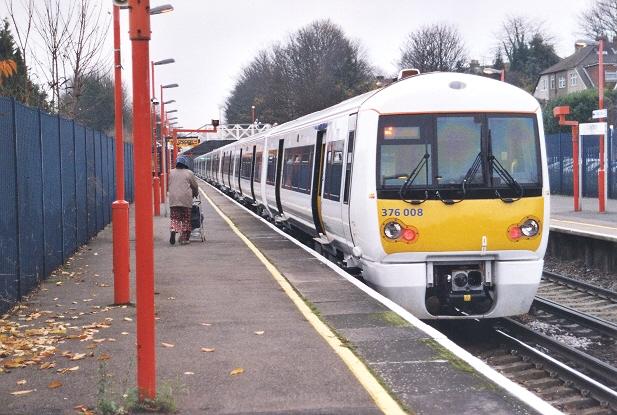 train, when it was seen pausing at Crayford. Network SouthEast's influence is still much in

remarkably well, or have received a new coat of the famous red colours of the now disbanded