In 1951 British Railways’ Southern Region began the design and construction of a new fleet of suburban electric multiple units for use on the South Eastern, South Central and South Western Divisions, replacing types which had been introduced from 1925 onwards in conjunction with the Southern Railway's commuter line electrification schemes. The Chief Mechanical Engineer of the Southern Region was, for a short period, Oliver Bulleid, whom oversaw his team of Chief Draftsmen develop an EMU based around the curves of the 1946-introduced 4 SUB units. Externally, this involved redesigning the cab ends of the 4 SUB, incorporating roller route indicator boards, and replacing the traditional hook and chain coupling with automatic buck-eye couplers. Mechanically, the then new suburban EMUs' constitution would differ from that of pre-nationalisation units: Electro-Pneumatic Brakes were to be employed over air brakes, the first time this system had been used in EMU stock. Thus, the Bulleid suburban units were christened ''EPB''. The EPB characteristic called for a new type of multiple working jumper cable to be installed on the cab ends. This would allow the EPB fleet to work in formation with any post-1952 SR EMU, although conversely, prevented multiple working with existing pre-1948 types, which retained the air braking system.

Lancing and Eastleigh works shared the construction task, the former being responsible for building and rebuilding the vehicle frames - a number of these had been recycled from former 4 SUB trailers. The EPB sets came primarily in two forms: two-vehicle and four-vehicle lengths, hence ''2 EPB'' and ''4 EPB'' respectively. From 1954 onwards, Ashford replaced Lancing as the supplier of coach underframes, now becoming the Southern Region's general supplier of brand new examples, after recycling from older EMU types had ceased. A number of traction motors were also salvaged from condemned stock, these being of 1936-origin. The first EPB, No. 5001, emerged at the end of 1951 and the first examples  of the class were deployed into revenue-earning service in January 1952, appearing on the Surrey, North and West Kent commuter networks, and the London suburban lines of the South Western Division. Construction of the Bulleid type ceased in 1957, by which time there were 213 examples. Bulleid had since transferred from the Southern Region to the Irish State Railways. Thereafter, EPB builds were to the standardised 1950 BR Mk 1 coach design which had first emerged as locomotive-hauled stock from Swindon, Derby and Wolverton Works. Consequently, vehicle lengths increased over the Bulleid stock: driving trailers were lengthened from 19.05m to 19.50m and inner vehicles from 18.90m to 19.35m. The cab was also totally face lifted, the central pane being widened from the route indicator window to the inside edges of the outer cab windows, giving the EMU front a more flattened appearance. Small upper windows above the main glass panes on the body sides also disappeared during production of the BR design.

Units were out-shopped in the standard all-over BR (S) coaching stock green, this scheme subsequently receiving minor modifications in 1963 with the introduction of the small yellow warning panels on cab fronts. Full yellow warning panels were applied to the EPB fleet from 1968 onwards, in conjunction with the BR ''suburban'' overall blue colour scheme. The Southern Region EPB fleet had previously been augmented in January 1963 with the delivery of  fifteen 2 EPB formations from the South Tyneside lines, which had been de-electrified and converted to DMU operation. These units had been built at Eastleigh during 1954 and 1955 for the Newcastle to South Shields route, replacing 1937 LNER units, and differed from Southern counterparts by having smaller head code windows, a larger brake van area (to accommodate fish boxes), and a First Class compartment in the Driving Trailer Second (DTS). Also worthy of note is the eleventh Motor Luggage Van (MLV) of SR lineage built by Eastleigh for the same Tyneside network: this replaced two LNER MLV vehicles, but interestingly was not transferred to the Southern when the 2 EPB formations were. Tyneside EPBs did not carry unit numbers or the ''2-EPB'' designation until after transfer to the Southern, becoming Nos. 5781 to 5795.

General refurbishment of the fleet commenced in 1980 at Stewarts Lane: the colour scheme was changed from suburban overall BR Blue to BR Blue and Grey (associated with main line stock), new interior trim fitted and fluorescent lighting and a public address system installed. A batch of twelve 4 EPB 12 units were  re-geared for 90 MPH running (opposed to their existing 75 MPH maximum gear ratio) during refurbishment, and were diagrammed on longer distance workings with 4 Vep units. In light of this, Ramsgate to Cannon Street via Chatham ''peak'' services were composed of 4 EPB - 4 Vep - 4 Vep, providing extra seating in the ''EPB'' portion to alleviate overcrowding. The re-geared EPBs were distinguished by a red band over the cab, until this colour was subsequently used to indicate single compartment stock. A number of 4 EPB units had already received 90 MPH gear ratios during the 1970s, when a bogie swap was undertaken with ''Hampshire'' DEMUs. The latter were struggling with 90 MPH gear ratio bogies on gradients in their namesake county after being strengthened in 1959 / 1960 with an extra trailer to make three vehicle formations. As a result, these DEMUs received 4 EPB bogies with a gear ratio of 65:16 (75 MPH), thus the donating EPB units received the ''Hampshire'' 90 MPH bogies. On paper, however, the EPB units involved in the bogie swap were still listed as having a maximum speed of 75 MPH.

In May 1985, the North London Line (NLL) had been converted exclusively for third rail operation and a batch of 2 EPB units were transferred from the Southern to work the services (by which time both the Southern network and NLL were under the common guidance of the London & South East Business Sector). Restricted tunnel clearances on the route decreed that window bars were fitted. EPBs never received the ''jaffa cake'' livery of London & South East, but repainting of units commenced after June 1986 with the re-launch of the sector as colourful ''Network SouthEast''. With the class nearing the end of its British Rail career, many units were withdrawn before receiving the ''toothpaste'' scheme, and BR Blue and Grey remained until their final days. Rapid decline of the fleet on the South Eastern Division began shortly after the first Class 465 ''Networker'' unit was delivered for testing in 1991, but the last 4 EPB was not withdrawn from here until 15th April 1995. EPB working on the Central Division had previously ceased on 14th May 1993. A batch of 2 EPB units were retained by British Rail for departmental use, such formations lasting for a number of years after privatisation, with the last members being delivered for scrapping in 2005. 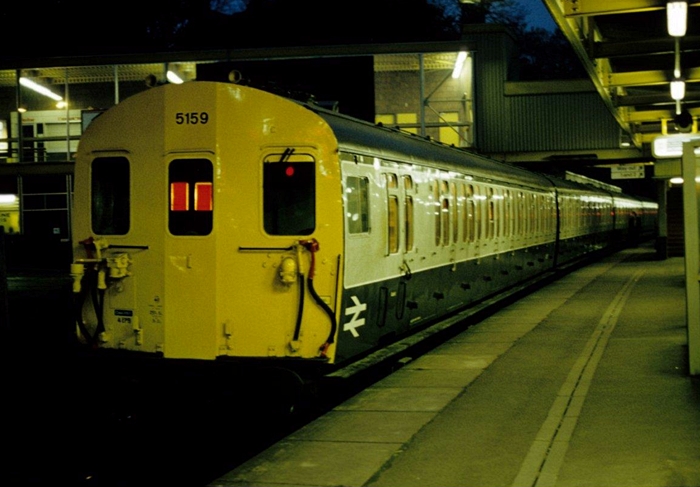 Clean 4 EPB No. 5159 is seen at Sevenoaks Tubs Hill's platform 4. It is thought that this unit had terminated with a service from Blackfriars via Bat & Ball. © Wayne Walsh 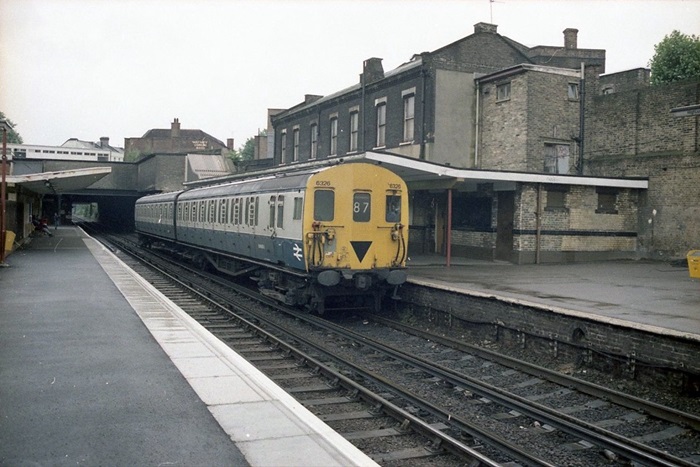 No. 416326 was one of a batch of 2 EPBs deployed to work on the North London Line in 1985, and the unit is seen here at Highbury & Islington. © David Glasspool Collection 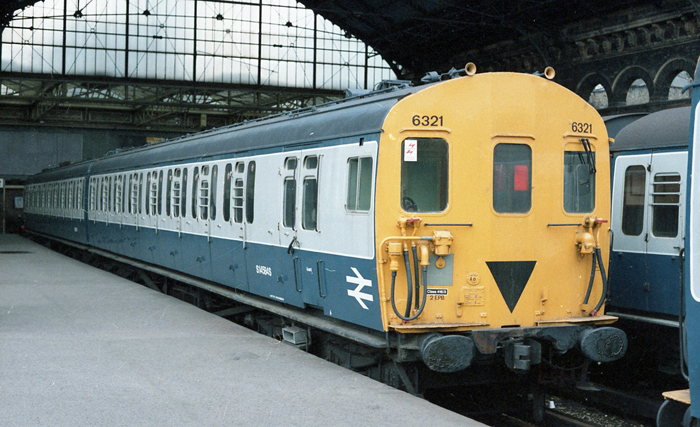 No. 416321 is seen at the doomed Broad Street station, which closed in June 1986. Note the window bars, affixed as a result of tight tunnel clearances on the North London Line. © David Glasspool Collection