Like a number of the diesel locomotives featured on this website, Class 47 numbers on the South Eastern Division have been limited due to the presence of native traction such as Classes 33 and 73, plus the fact that the majority of passenger services on the Southern Region in general were electrified. Nevertheless, they have worked just about every type of traffic in virtually every part of the country, the South Eastern Division being no exception.

The Class 47 programme had started life as a follow-on from the Class 45 ''Peaks'' of the Midland Region, and with orders for what soon transpired to be a colossal amount of locomotives being placed in 1961, construction of the first of the type began in 1962. In total, 512 locomotives were ordered (replacing steam traction in one large swoop) and three works were assigned to produce the type: Loughborough (Brush), Crewe (BREL) and Gorton (Beyer Peacock). These would assemble 310, 182 and 20 locomotives respectively, the latter two under licence by Brush, the contractor. Sadly, Beyer Peacock (BP) was in its death throes as a result of the ever diminishing market for steam locomotives - the company's venture into diesel locomotive building before this order had also been grim. Subsequently, BREL agreed to assume responsibility for BP's order - locomotive batch D1842 to D1861 - as the owners of the latter hastened winding up the company's functions; the Gorton Foundry closed in 1966. The full ''Type 4'' order was completed in 1968, by which time two locomotives had already been scrapped due to collisions: D1734 was written off in March 1965 and scrapped one month later, with D1734 following in a later accident in April 1966, this also being broken up within the following two months. To add to this interesting early class history, considerable technical variations between newly delivered locomotives were in evidence. Five locomotives (D1702 to D1706) were fitted with an experimental engine designated ''Sulzer 12LVA24'', with the rest of the fleet sharing a common ''Sulzer 12LDA28C'' classified power-plant. The batch of five were consequently designated ''Class 48'' and in brief, their engine differed by having cylinders positioned in a ''V'' shape, compared to the standard engine of twelve cylinders positioned in a horizontal line. By 1971 these locomotives had been converted to the standard Brush Type 4 configuration and their V-shaped engines dispatched to France for reuse by SNCF, which found them just as troublesome as British Rail did! The original 1961 order now stood at 508 active locomotives, D1908 and D1562 being scrapped in October 1969 and September 1971 respectively as a result of collision damage.

Examples of Class 47, as it became under TOPS, were not given a South Eastern Division allocation, but throughout the 1970s could be seen in the region fronting a small number of aggregate (notably the Mountfiled to Northfleet Cement Works) and ferry van workings, in addition to hauling inter-regional excursion traffic. Without doubt their presence and range of workings here in general saw a significant increase after 1982 sectorisation, as they began working wider afield with the InterCity and Railfreight sectors. The following InterCity Cross Country diagrams were almost exclusively Class 47-hauled:

In general, these formations were usually composed of BR Mk 2a or Mk 2f air-conditioned stock (or a mixture), which would be hauled by the diesel as far as Willesden Junction, where a Class 86 would take over. Now is an ideal time to mention Class 47 passenger working compatibility: the majority of the fleet had been fitted with steam-heated boilers from the outset to work with pre-Nationalisation stock, BR Mk 1s and the first batch of Mk 2s (which were still heated this way), although the first twenty Type 4s were built with Electric Train Heating (ETH) capability. However, 81 of the fleet were built without any heating provision, therefore these were confined to freight workings. Steam heated boilers were replaced in ensuing years by retro-fitted ETH as newer stock now required this, and air braking became a requirement as a result of 1967-introduced BR Mk 2a stock (Class 47s having been built with vacuum brakes). Furthermore, structural damage was being unearthed as a result of high speed and subsequently, engines were de-rated from a 90 MPH top speed to 75 MPH in order to alleviate this. The power-plant would also have a greater operational life.

As aforementioned, Class 47s have appeared on aggregate workings in Kent, but their usage in the county on freight diagrams saw an increase in March 1990 as a result of Thamesport opening on the Isle of Grain. This brought a new type of traffic to the North Kent Line: containers. These container trains, also known as ''Freightliners'', were handled by the October 1987-established Railfreight Distribution sector, using Class 47s running off Hither Green (although it is quite possible they were just stabled here, rather than having an official allocation on paper). Class 47 workings increased in the county still, with the opening of the Channel Tunnel in June 1993, freight to and from the continent by rail initiating (electrics would take over at Dollands Moor to haul traffic through the tunnel). General decline of the class on the South Eastern Division, not to mention on a national scale, began after railway privatisation. The container workings from Thamesport became part of the dealings of privatised ''Freightliner'' in 1996, Class 47s appropriately being re-branded with this name whilst retaining the two-tone grey livery. The Railfreight Distribution sector, however, still remained as part of the British Rail Board until its ultimate sale on 22nd November 1997 to the largest freight operator, English Welsh & Scottish Railway. Orders for Class 66 locomotives were placed in 1999 by Freightliner and by 2001, the Class 47s had all but gone from Isle of Grain container workings. Class 66s had been arriving in force since 1998 with EWS, subsequently superseding those Class 47s on runs to Dollands Moor. Nevertheless, their presence had not wholly evaporated from the county and until the end of 2003, the type usually top-and-tailed with Class 73 Electro-Diesels on the British Orient Express out of Victoria. Throughout 2004 and 2005 the class also saw further work on EMU scrap movements from Ramsgate to Caerwent, in addition to hauling Class 365s between Ferme Park on the Eastern Region, and Chart Leacon (Ashford) during refurbishment work.

Freight Workings: as usual, not a complete list of every working! These lists will be added to and amended over time.

Thanks to Neil Bays for providing details on additional workings 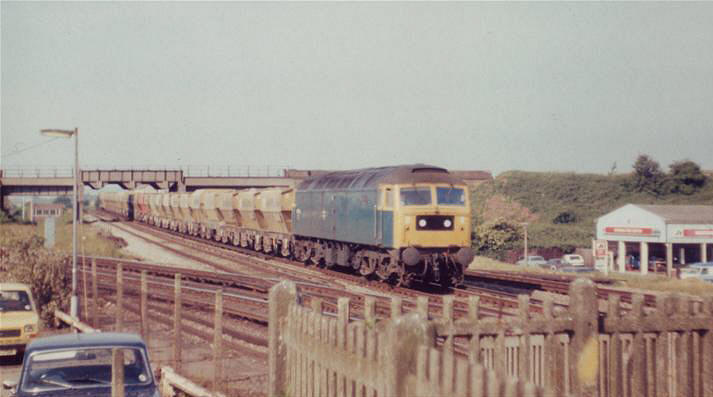 On Tuesday 23rd June 1981, at 08:49, No. 47188 was observed approaching Strood station with the 08:25 Allington to Westbury ARC (Amey Roadstone Corporation) PGA empties. Note in the middle of the formation, just before the bridge, the red BR experimental HBA wagon. Also, in the immediate foreground, is the Southern Railway's distinctive concrete fencing. © Chris 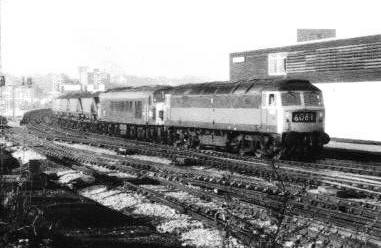 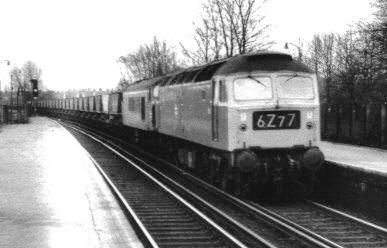 These two very interesting pictures submitted by Tom Burnham not only show the Class 47 in its early guise on the North Kent Line, but also illustrate what would initially seem to be a rare visitor to the line - at least to the untrained eye! The picture on the left depicts Dartford in the early 1970s, with a Class 47 in the original two-tone green piloting a Class 45 ''Peak'' of the Midland Region, on the Welbeck to Northfleet Cement Works coal diagram. On the right, a return empty working from Northfleet is seen cruising through Sidcup in the early 1970s, again double-headed by a Class 47 and Class 45 combination, both in overall BR Blue. Tom says that in the early years of this working (the Northfleet terminal having opened in 1970), double-heading was customary, with the Class 45 being common. As loads became lighter, the working went down to single locomotive haulage. © Tom Burnham 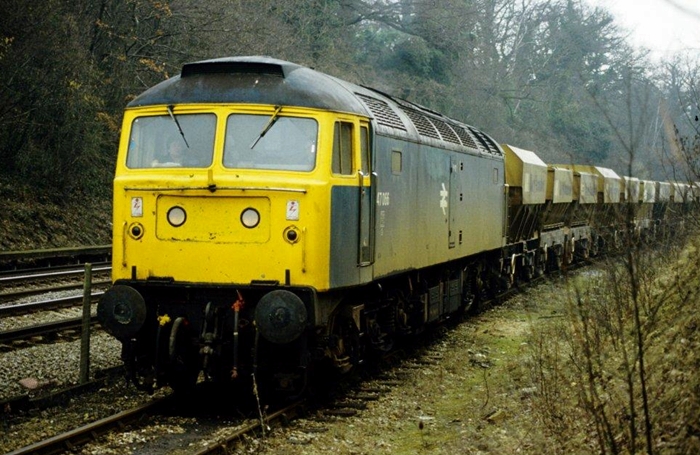 No. 47066 is seen shortly before it received high-intensity headlamps, in the siding at Allington. It is fronting empty ARC hoppers bound for Westbury. A Class 59-hauled working from here still exists today, timetabled to stop at Hither Green. © Wayne Walsh 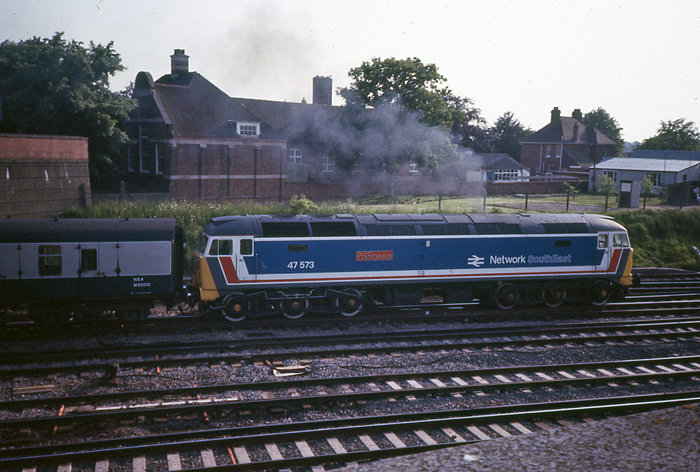 No. 47573 is seen departing Ashford days after receiving Network SouthEast livery, hauling empty newspaper vans from Dover Priory to Victoria in June 1986. The locomotive had been named "The London Standard" at Liverpool Street station on the 9th of that month. © John Ridings