Up until the early 1990s, the Hither Green-based Class 33s had been the prime diesel motive power on the South Eastern Division (excluding the Class 08/09 shunters), these frequenting the lines of North Kent in particular. From 1991 onwards these became less common with the full commissioning of the Class 60 fleet as part of the TrainLoad Business Sectors’ push for more powerful and reliable traction, but the former could still be seen double-heading departmental workings in the area until the end of 1998. Plus, numerous Class 73 Electro-diesels of similar vintage remained. Of course, Class 47s had always existed in the environs of Kent in a much smaller form, particularly on InterCity Cross Country workings throughout the 1980s and early 1990s, in addition to a batch of eight Class 56s which had received South Eastern Division allocation in 1990 (these then being re-allocated on the availability of more Class 60s for North Kent aggregate workings in 1991). The run up to privatisation had seen the formation of three new business sub-sectors (or, shadow franchises), namely ''Mainline'', ''Transrail'' and ''Loadhaul''. A large proportion of these freight locomotives were treated in each sub-sector's respective livery, but the aforementioned locomotive situation in the Kent region remained. In 1996, American giant Wisconsin Central acquired all three of these shadow freight businesses, which saw some interesting shifts in locomotive classes – more of later.

In February 1996, English, Welsh & Scottish Railway (previously known as ''North & South Railways'') became the first privatised freight operator in the country and acquired the sub-sector operations, plus full ownership of the constituting locomotives. As a privatised industry the freight market had the potential of becoming more competitive with other transport methods, but lest it is forgotten, the freight sectors had very much improved the British Rail freight scene since their 1987 formation. This success was then somewhat run-down as privatisation loomed. The first noticeable changes to occur on the post-1996 freight operation were naturally to liveries, as EWS red and yellow began to prevail on a proportion of the motive power, but the greatest upheaval was yet to come. A review of the company’s newly-acquired assets was conducted, with management deeming that the majority of the diesel fleet was either beyond its best, would soon need expensive overhauls, or lacked standardisation – or in some cases, all of these. This, coupled with the parent company’s desire to kick-start the British operation into a feasible profit venture (creating a ‘’vision of the future’’), resulted in the largest single order of diesel locomotives in recent times. The locomotive package devised by the selected manufacturer - General Motors - could trace its lineage back to that of the Foster Yeoman’s Class 59 fleet. These had proven to be robust machines since their inception in 1986, demonstrating unprecedented reliability and efficiency. Thus in 1997, EWS placed an order with General Motors of Ontario, Canada, to construct no less than 250 diesels based on an improved Class 59 platform; the transformation of British freight diesel motive power had begun.

The first locomotive, christened ‘’Class 66’’, arrived in Britain in April 1998 at Immingham Docks and was officially received by EWS on the 18th of that month. Delivery thereafter was swift and by June 2000, all 250 examples had been commissioned. This now returns us to the topic of class re-allocation: a number of Class 31s became displaced from major diesel depots during the Class 66 deliveries, and this native Eastern Region breed was subsequently transferred, in a small form, to the South Eastern Division. The diminutive pool of Class 31s became attached to Hither Green depot and assumed the main role of Hither Green to Hoo Junction departmental workings - taking over from the last Class 33s - although a number were sometimes diagrammed to work the Purley to Cliffe aggregate. This would at least delay the arrival of the new class in the area, with the Hoo Junction scene now consisting of a mixture of Class 31, 60 and 73 locomotives. Following the Class 31s to the South Eastern Division were a number of Class 58s. These locomotives began appearing from 1998 onwards on Kent metals, but official Class 58 allocation to Hither Green depot came later, in October 2000, with the remaining class members being split between here and the South Western Division at Eastleigh. Whilst the North Kent Line may have been temporarily immune from a substantial influx, Class 66s had already been appearing on Channel Tunnel traffic through the county, now frequenting the ‘’Chatham’’ and SER main lines on Dollands Moor runs.

Now onto container workings. Thamesport on the Isle of Grain had boomed as a docking point on the turn of the 1990s and since then, Railfreight Distribution of British Rail had handled the traffic. The ''Freightliner'' operation was privatised in 1996 by means of a management buyout and container flows from Thamesport  remained Class 47-hauled for a short while.  The company initiated a refurbishment programme for twelve of its Class 47s, which fundamentally outlined a complete engine replacement by Brush Traction, the Sulzer power plant being replaced by a General Motors build. These modified locomotives became ''Class 57'', but there was no extension of this refurbishment scheme beyond this original batch of twelve - it is to be noted, however, that this type was never employed on the South Eastern. Observing the success EWS was having with their first Class 66 deliveries, Freightliner were swayed towards acquiring a number of the Canadian-built locomotives and in 1999, put in an order for five of the type. This initial order was latterly increased and by 2001, Freightliner had fifty-nine Class 66 locomotives on their books, of the designation 66/5. These soon replaced the Class 47s on Thamesport workings, and with Kent-based Class 31s beginning to disappear in 2001, Class 66s in both EWS and Freightliner colours began arriving in force on the North Kent Line (but with no such allocations of the type to Hither Green). EWS-owned Class 47s also began disappearing in numbers from the area thereafter, and by 2002 this type’s main South Eastern Division working was that of the Orient Express from Victoria. Class 73 Electro-diesels were the next casualty, being taken out of EWS service in 2003, subsequently leaving the Class 08/09 and 37s as the last remaining BR stronghold at Hoo. The Class 73s had seen more charter work than ''proper'' workings in their final years with EWS. In early 2005, the remaining Class 37s at Hoo Junction were then withdrawn to Hither Green and put in outside storage, whilst Class 66s took over a number of the trip freight workings and yard shunting duties. With Class 66s now being used increasingly in yards for general shunting duties, the diminutive, but powerful diesel shunters face an uncertain future. 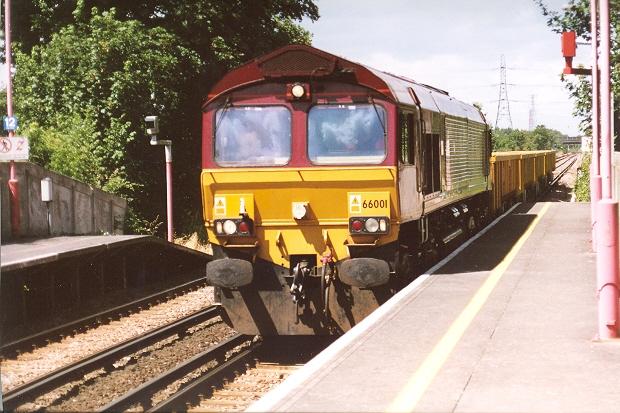 To begin the class pictorial we see the first of the 250-strong class, No. 66001 trundling through

The Class 66s are unable to reach their 75 MPH top speed along this primarily commuter route! 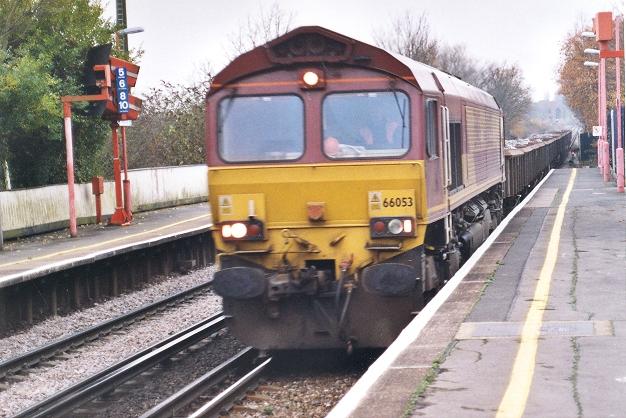 No. 66053 was seen trundling past Bexley station, on the North Kent route via Sidcup, towards Hoo

Junction on 1st December 2004. From No. 66137 upwards, there are detail differences with cab

Earlier examples are also to be retro-fitted with this. David Glasspool 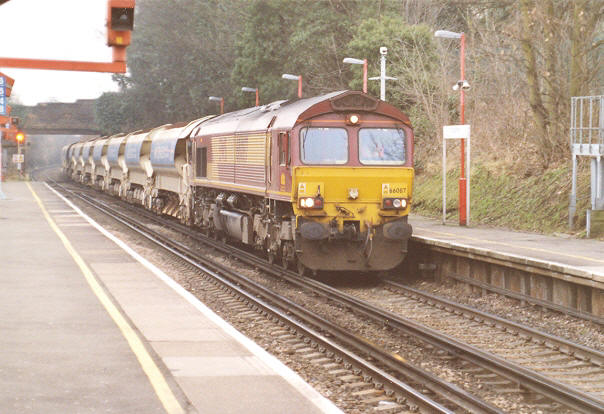 to Eastleigh departmental. The bridge posed no problem for the locomotive's 3.91 metre height.