Privatisation of British Rail's freight operations got underway in December 1995, when US-based "Wisconsin Central Railway" bought a one-third stake in "Rail Express Systems Limited" (RES). RES was a British Rail business sector which held a contract with Royal Mail for letter and parcel distribution, in addition to operating Queen Elizabeth II's Royal Train. This was followed on 24th February 1996 by the same company, through a wholly-owned subsidiary called "North & South Railways", purchasing three freight sectors: "LoadHaul", "TransRail", and "MainLine". These had been formed two years previously in preparation for privatisation, replacing the erstwhile "TrainLoad" freight sectors of the 1980s, and encompassed 910 locomotives of varying ages. At this time, "North & South Railways" was rebranded "English, Welsh, & Scottish Railway" (EWSR or EWS).

Long-term cost-cutting measures were swiftly implemented in May 1996, when EWS ordered 250 new diesel-electrics from the Electric-Motive Division (EMD) of General Motors (GM). Construction of the entire order was undertaken at GM's factory in Ontario, Canada, and the first locomotive arrived at Immingham Docks, Lincolnshire, in April 1998. The fleet became "Class 66" (also known as the General Motors Type 5) and, both aesthetically and mechanically, followed in the footsteps of their older Class 59 cousins. Their introduction provided the opportunity to retire a series of elderly ex-BR locomotives which were expensive to maintain.

In addition to general freight traffic, there were two niches which EWS also sought to modernise: those of the charter and mail businesses. Charter traffic mainly involved hiring out locomotives and crew for special workings, these of which offered lucrative returns in this increasingly expanding sector. Mail traffic, however, offered the biggest potential in receipts, but this was coupled with what were reportedly the toughest schedules on the National Rail network. The existing Royal Mail contract inherited from RES specified an exacting performance agreement, where intensive services were timed to tight schedules.

Until this time, the traffic RES dealt with had been handled exclusively by Class 47 diesels (introduced 1962-1968), but to reduce operating costs and ensure a high availability rate, EWS sought a brand new replacement. Indeed, Royal Mail had kick-started its own modernisation programme in 1993, by developing a new mail distribution network to which rail traffic was key. This involved commissioning a huge distribution centre at Willesden, establishing six rail-served sorting depots, and procuring a fleet of sixteen four-vehicle electric multiple units dedicated to mail traffic. The latter, which became "Class 325", were generally introduced to service in September 1996 after a difficult testing period imposed by Railtrack. The units were wholly-owned by Royal Mail, but used EWS crews, and unlike the more traditional stock, they were not Travelling Post Offices with on board sorters.

To haul those Royal Mail diagrams which were not on electrified routes, EWS again turned to EMD of GM to design and build a new line of diesel-electric locomotives. Fleet standardisation was key and, ideally, EWS wanted a high performance version of the Class 66, capable of 125 MPH running and equipped with Electric Train Heating (ETH). However, on evaluation by EMD, a compromise had to be made. Whilst the internal components of the proposed locomotive fleet, such as engine and traction motors, could remain similar to the Class 66, the Co-Co arrangement (two bogies of three driving axles each) was not suitable for 125 MPH running. It was hinted that Brush Traction could supply the Co-Co bogies, which would have been the most desirable wheel arrangement for the high speeds involved; however, this was deemed too expensive and an alternate Bo-Bo wheel set (two bogies of two driving axles each) from EMD was settled on.

EWS placed an order with EMD in 1998 for a fleet of thirty of the high-speed diesel electrics, at a total cost of £45,000,000. This was organised through leasing company "Angel Trains", ultimate finance being provided by "Export Development Bank Canada". EMD subcontracted the order to Alstom in Valencia, Spain, where factory space was available; additionally, Alstom had greater experience in manufacturing high speed diesel-electrics. Construction of what became the "Class 67" started in 1999 and the first example, No. 67003, arrived at Newport Docks, Wales, on 6th October of that year, deliveries continuing into 2000.

These were distinctive-looking locomotives, which were nicknamed "Cyclops" early on as a result of their single-span windscreens. Weighing in at 90 tonnes, other features included sloped-back cab fronts and corrugated sides, and the fleet was painted in maroon and yellow EWS livery. Fed by a 1,201-gallon fuel tank, a 3,200 HP engine - essentially a smaller version of that fitted to the Class 66 - powered four traction motors. 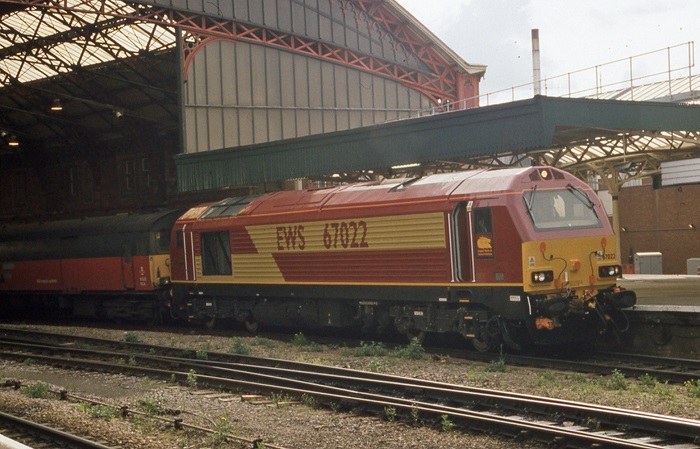 No. 67022 is seen at Bristol Temple Meads fronting a train for which it was originally intended: one carrying letters and parcels. These formations, which used traditional TPO stock based on the BR Mk 1 profile, last ran in January 2004. © David Glasspool Collection 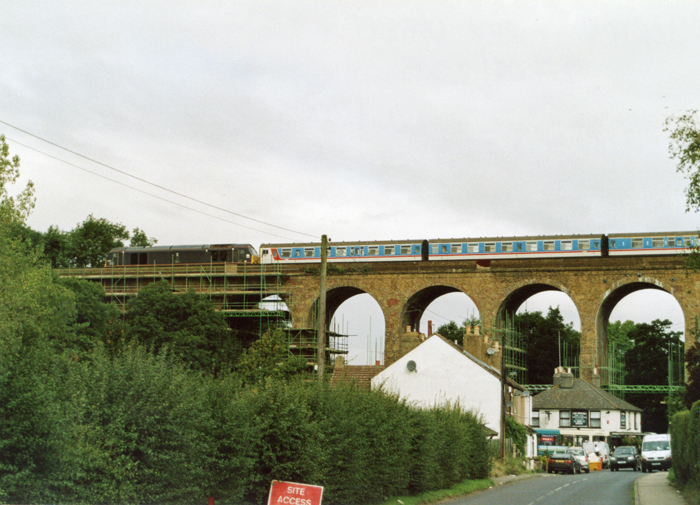 In 2005, Nos. 67005 and 67006 were repainted into a "plum" livery, specifically for top-and-tailing the Royal Train. Of course, this was not an every day affair, and outside of this duty the pair were used on other workings. Here, No. 67005 "Queen's Messenger" is seen hauling 4 Cep No. 1698 over Horton Kirby Viaduct, the latter bound for scrapping at Immingham. © David Glasspool 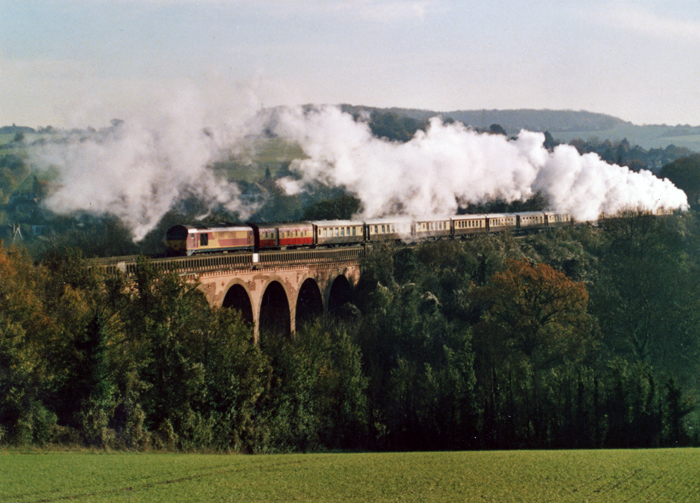 No. 67008 trailed on the spectacle that was the 11:45 Orient Express from London Victoria to Folkestone West, led by unrebuilt Battle of Britain Class No. 34067 "Tangmere". It was scheduled to arrive at Folkestone at 15:15 and is seen making its way over Eynsford Viaduct on the outward leg. The service was originally bound for Whitstable, travelling via Chatham, but this was altered due to last minute engineering works. © David Glasspool