Shortly before the June 1986 formation of Network SouthEast, the London & SouthEast Business Sector had set the ball rolling on two important Southern Region infrastructure projects: the Bournemouth to Weymouth electrification, and the reopening of Snow Hill Tunnel, the latter being situated between Farringdon and Blackfriars stations, running under Smithfield Meat Market. Both schemes heralded the procurement of new rolling stock: the South Western Division was to receive a BR Mk 3-derived EMU, allowing a service to be run on this territory which could legitimately be referred to as ‘’Inter-city’’. The Central and South Eastern Divisions were not only set to receive new rolling stock, but as a result of Snow Hill Tunnel’s re-opening, the networks were to see new direct services to and from the Midland Region. In brief, Snow Hill Tunnel had been in existence since January 1866, when the LC&DR had extended its running lines from Ludgate Hill, to meet the rails of the Metropolitan Railway at Farringdon. Freight and passenger services between the regions operated over this useful stretch of line, but wartime economies saw the latter cease permanently on 3rd April 1916. Freight continued through Snow Hill Tunnel thereafter, not ceasing until 1969, coinciding with the closure of the original 1864 Blackfriars railway bridge.

By the end of 1986, track relaying and signalling through Snow Hill Tunnel had been completed, and in the following year, orders were to be placed for a new EMU fleet to operate over the revived route. BREL York was awarded the contract to initially construct twenty dual-voltage four-vehicle units, of which would become ‘’Class 319’’. At the time, EMU design was based around the successful BR Mk 3 coach profile pioneered during the HST construction programme (indeed, classes 317/318/319/320/321 and 456 are also Mk 3-based). The Southern Region presented electric power in the form of the 750 Volts D.C. third rail, whilst the Midland Region had 25Kv overhead wires in place, hence the requirement for Class 319 units to be equipped with both a pantograph and third rail collecting shoes. The type had a top operating speed (at least on paper) of 100 MPH and 90 MPH on A.C. and D.C. systems respectively. The first unit had been completed by Autumn 1987, and in the Summer of 1988, the construction of a further twenty of the type was authorised by the Treasury, bringing a fleet total of forty. However, this was set to increase once again. The December 1988 Clapham Junction crash had seen six Mk 1 units written off. Consequently, in that same month, the government authorised British Rail to place an emergency order for an additional six Class 319 units to fill the breach, this small batch being completed the following year.

In the meantime, the Thameslink service through Snow Hill tunnel had begun, all Class 319 units produced so far offering only Standard Class seating. The Summer 1988 timetable, introduced in May, at that time included the South Eastern Division:

By 1991, service alterations included the addition of:

The opening of St Pauls Thameslink (later ‘’City Thameslink’’) station on 29th May 1990 had been preceded four months earlier by the closing of the site at Holborn Viaduct. To improve service frequency on the instantly popular Snow Hill Tunnel route, a further order had been placed in 1989 with BREL York for an additional fourteen Class 319 units, again all with Standard Class seating, bringing the fleet total to sixty. All examples were allocated to Selhurst Depot. 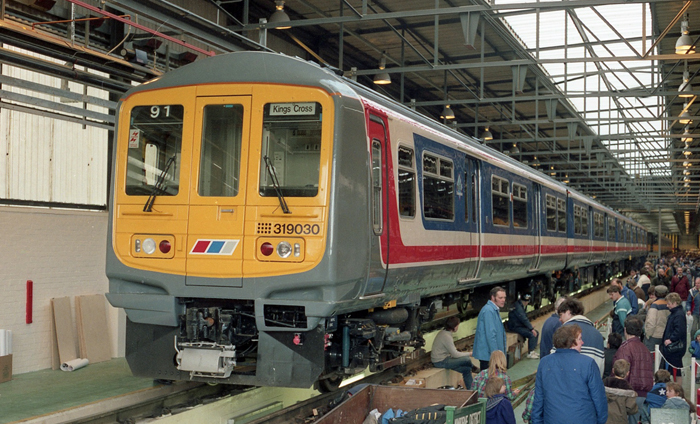 The first ever open day at Bournemouth Depot provided Network SouthEast with the opportunity to display two new additions to the electric multiple unit fleet: Classes 319 and 442. A sparkling No. 319030 is seen within the maintenance shed. In the background, on the same track, was an equally new "Wessex Electric". © David Glasspool Collection 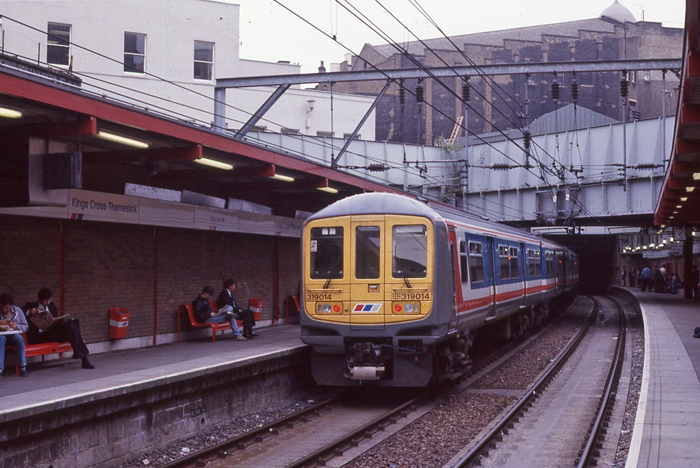 No. 319014 is seen departing Kings Cross Thameslink station, Bedford-bound, during the second month of timetabled "Thameslink" operation. This station closed on 9th December 2007, when it was replaced by new platforms underneath St Pancras International. © David Glasspool Collection 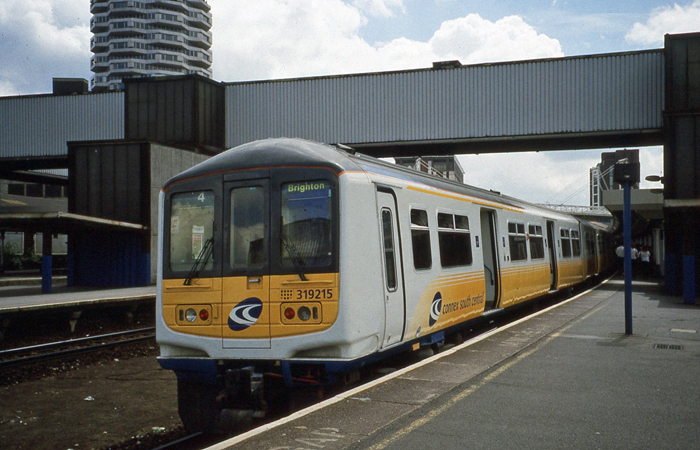 No. 319215 is seen at East Croydon wearing the "Connex Express" white and yellow livery of franchise operator "Connex South Central". The "Connex Express" service commenced on 27th January 1997, running from Victoria to Brighton. For this a new subclass, 319/2, was introduced through the refurbishment of unit Nos. 319014 to 319020. © David Glasspool Collection