This is a class of hardworking, humble units, which ply the dense suburban lines of South East London. They are the result of ‘’Network 2000’’, a general rolling stock renewal exercise by BR Business Sector ‘’Network SouthEast’’ (NSE). First mooted in 1986 the scheme, also know as the ‘’Networker Revolution’’, aimed to replace slam-door stock on those suburban lines radiating out of the capital. On the South Eastern Division specifically, this involved retiring 2/4EPB units dating from the 1950s, whilst also making inroads for producing new stock for the Kent Coast lines. At this time, however, it was deemed that existing stock on the Kent Coast would be phased out over a longer time period than that on suburban diagrams. In addition to the above, the project encompassed the replacement of diesel stock on the ‘’Chiltern’’ lines from Marylebone, and on the ‘’Thames’’ line from Paddington.

Between 1983 and 1989 inclusive, commuter travel into and out of the capital increased by 23%. Over the years up to 2000, it was forecast that passenger numbers would increase by a further 15% – by 1990, approximately 473,000 passengers were using NSE services to London. To satisfy this growth in demand, investment was required in new rolling stock which offered the following:

The ball was set rolling in 1988, when NSE confirmed that two variants of a common design would be produced: diesel and electric. The diesel units were to come in two and three-vehicle formations, and be deployed on the ‘’Chiltern’’ and ‘’Thames’’ lines. As part of the scheme a brand new depot, tailor-made to service these units, was planned for Aylesbury, Buckinghamshire. Those units working out of Paddington were to be allocated to a new depot at Reading, situated within the fork of the diverging Bristol and Exeter lines west of the station. The new-builds were given the ‘’green light’’ to go ahead in 1989. By 1990, 89 new carriages had been ordered for the ‘’Chiltern’’ lines and 91 for the Paddington lines. These units became known as ‘’Class 165’’, or ‘’Networker-Turbo’’, and construction of the vehicles was subcontracted to BREL, York. The units destined for the Paddington lines were designated 165/1; although these were virtually identical to their ‘’Chiltern’’ counterparts, they boasted a higher top speed of 90 MPH versus 75 MPH. In addition, the 165/1 also lacked Automatic Train Protection (ATP). A final order for the diesel fleet was placed in March 1991. This was for 63 vehicles, which were to be formed into 21-units of three carriages each, and be deployed between Paddington and Oxford. These units were designated ‘’Class 166’’, or ‘’Networker Turbo Express’’, and comprised a revised internal seating arrangement, a 90 MPH top speed, and air-conditioning. Protracted development of the air conditioning system meant there would be a delay between the last Class 165 vehicles being completed at York and work starting on the first of the Class 166 carriages.

Now moving onto the electric variant of the ‘’Networker’’ family for South Eastern Division routes, this itself was to come in two forms: ‘’suburban’’ and ‘’main line’’. Of the latter, this was first proposed in 1989 to replace the 4-VEP fleet on Kent Coast diagrams. The ‘’suburban’’ units had been in the design phase since as early as 1986, and a final mock-up was settled on in 1988. In May 1989, NSE submitted plans to the government for 676 new vehicles, to be formed into 169 four-vehicle electric units for South Eastern Division commuter lines. These units were designated ‘’Class 465’’ and branded as the ‘’Kent Link Networker’’. Formal approval was given for the construction of an initial 400 carriages on 31st August 1989. The order was split equally between the Class 165 contractor BREL, York, and Metro-Cammell, Birmingham (which was purchased by GEC-Alsthom in 1989). Originally, both companies had made separate bids to construct the entire Class 465 fleet with completely different traction packages. The Government preferred the BREL order, but objections from Metro-Cammell saw the contract split between the two companies. Whilst the external appearance of the batches of units from each company would be virtually identical, totally different internal traction and electronic systems would be incorporated. This would require separate stockpiles of spare parts, and mean that components were not interchangeable between the BREL and GEC fleets.

In February 1991, BREL completed a pre-production shell of a Class 465 driving vehicle. This was used as a test-bed for engineers, and allowed a dry run of installing all internal equipment. Body shells of the ‘’Networker’’ family of units were fabricated from aluminium, which reduced weight over an equivalent train built of steel, and also aimed to reduce maintenance costs. Body shells for the BREL batch were manufactured on a then new aluminium production line at York Works. Construction of those body shells for the GEC-Alsthom batch was split between ‘’Società Italiana Ernesto Breda’’ of Italy and ‘’Maquinista’’ of Barcelona, Spain. In February 1991, the first GEC body shell underwent stress tests at the Swiss Federal Railway’s workshops in Chur. 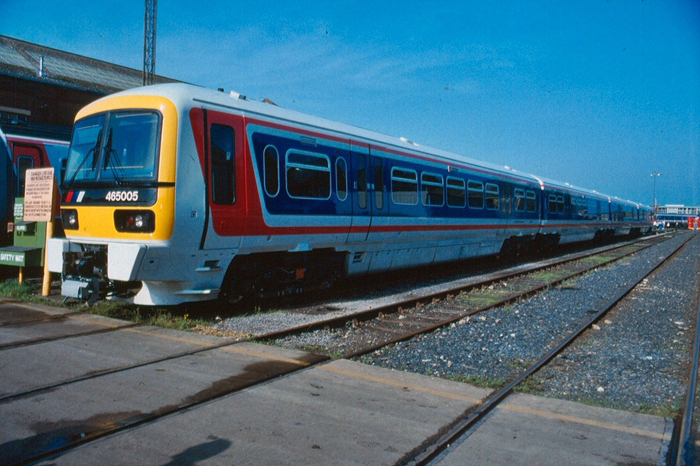 Sparkling BREL-built No. 465005 is seen at Eastleigh Works Open Day. The units were equipped with buffers, a feature which their diesel ''Networker Turbo'' counterparts lacked. © David Glasspool Collection 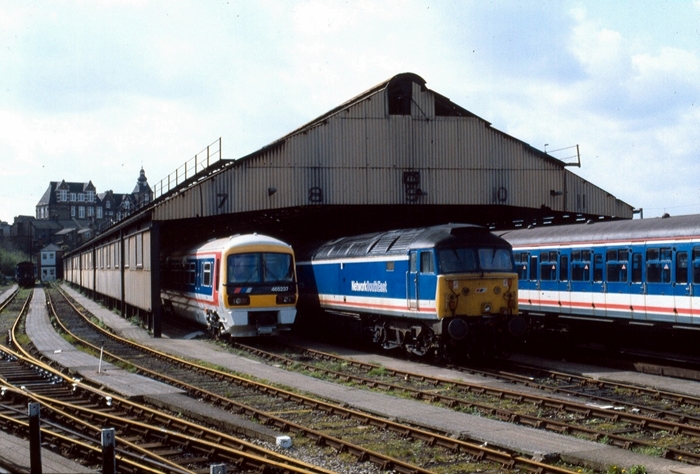 Brand new No. 465237, part of the batch built by Metro-Cammell (GEC-Alsthom), is seen stabled within Clapham Junction carriage shed, alongside stock of a different generation. The diesel is Class 47 No. 47705, which at that time was still hauling Waterloo to Exeter services. Scheduled locomotive-hauled services on that route ended on 10th July 1993. Happily, No. 47705 is still with us, and has since been converted to a Class 57 ''Thunderbird'' locomotive for ''Virgin Trains''. © David Glasspool Collection

The first member of the Class 466 fleet, No. 466001, is seen on a test run at Basingstoke. The South Western Division was used as a test ground for the then new units, including the main line between London and Eastleigh, and the Shepperton branch. © David Glasspool Collection 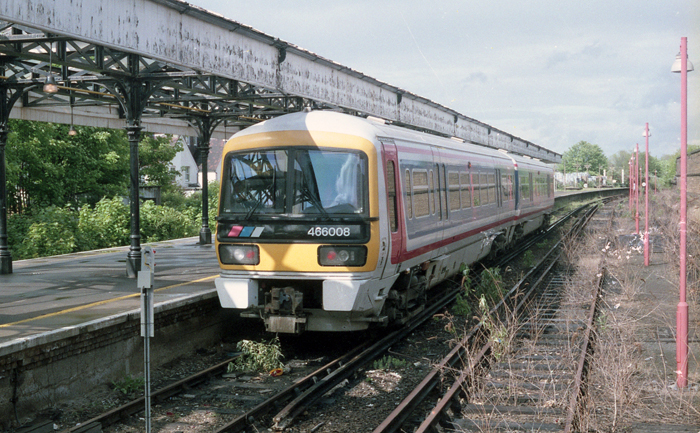 No. 466008 is seen at a dilapidated Addiscombe, forming the shuttle service between there and Elmers End. Closure of the Addiscombe line was enacted on 31st May 1997. © David Glasspool Collection