The first line across the Hoo Peninsula was that to Port Victoria on the Isle of Grain, commissioned by the South Eastern Railway on 1st April 1882 in response to the LC&DR’s opening of Queenborough Pier on Sheppey. That was then followed by a branch to Allhallows-on-Sea, opened on 16th May 1932 and terminating to the west of the creek which separates the Isle of Grain from the mainland. In 1950, the oil refineries arrived on the island and Port Victoria closed on 18th June of the following year, although the wooden pier had for long been abandoned, it having rotted beyond repair.

This section aims to illustrate one of the Hoo Peninsula's younger spurs, the interesting single-track branch to Cliffe Gravel Works. The branch had started life serving the Portland Cement Works in 1961, when cement trains were initiated between Cliffe and Uddingston, Glasgow. The line remained in this capacity only until 1969, when the chalk pits at the site were exhausted and then flooded, the cement operation here ceasing: Northfleet became the main rail hub for this commodity the following year. The pits were flooded even with some of the cranes and machinery left in them - in one particular pit at least, a crane can be seen rising out from beneath the water! In 1970 the former cement works was taken over by Marinex Gravel Ltd, which used the location as a base for receiving gravel which had been dredged from the bed of the Thames. On the Thames, immediately adjacent to Cliffe Fort, deep water jetties were erected to moor ships which had been involved in sea dredging. These ships comprise of ''scoop'' apparatus which allows them to excavate gravel from the seabed, this of which is subsequently stored in the hull and then conveyed to the aforementioned jetties. Being deep water piers, ships can moor at any time, regardless of the tide. Between the jetties and the gravel works, there is a one mile long conveyer belt which transports the accumulated gravel from the moored ships to the works complex. At the works the gravel is then filtered between further conveyers, which ultimately pour the aggregate into waiting hopper wagons, these of which primarily have three destinations: Purley, Crawley and Stewarts Lane. The trio are holding sidings, where trains are re-marshalled into other formations for destinations elsewhere - it is known that ''London Concrete'' are at least based at Stewarts Lane.

The present layout at the gravel works. © David Glasspool 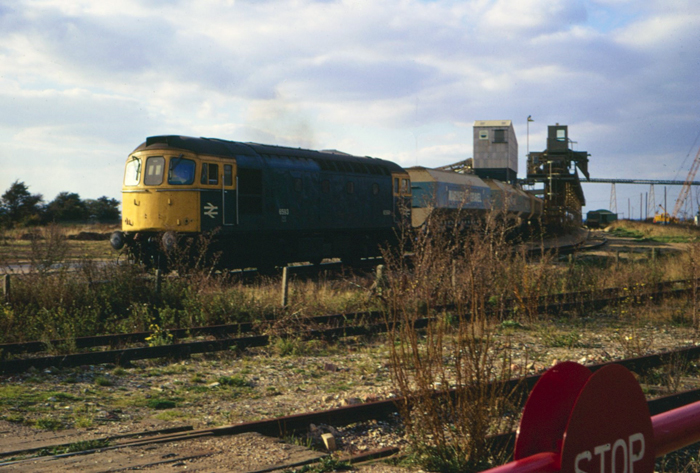 In the "Marinex" era, Crompton No. 6593 (latterly Class 33 No. 33208) is seen departing the terminal with hoppers loaded with sea-dredged aggregate. This locomotive remained in service until 1997 and can now be found on the Mid-Hants Railway in Hampshire. © Tom Burnham 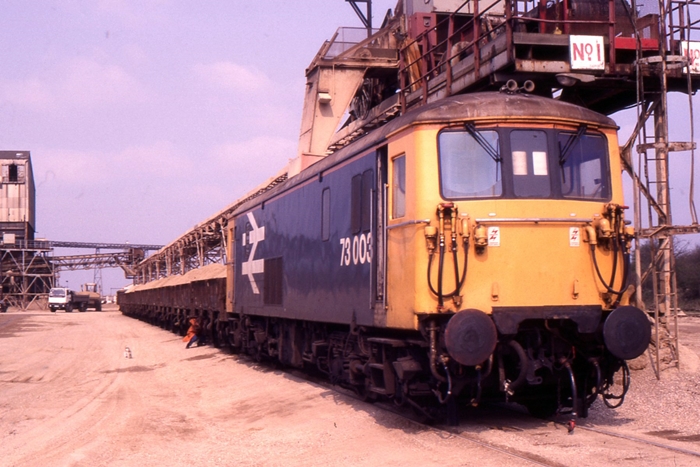 Electro-Diesel No. 73003 is seen picking up a train of sea-dredged aggregate. The locomotive was named ''Sir Herbert Walker'' in March 1993, after the first General Manager of the Southern Railway, a title it carried until withdrawal in September 1996. © Roger Goodrum 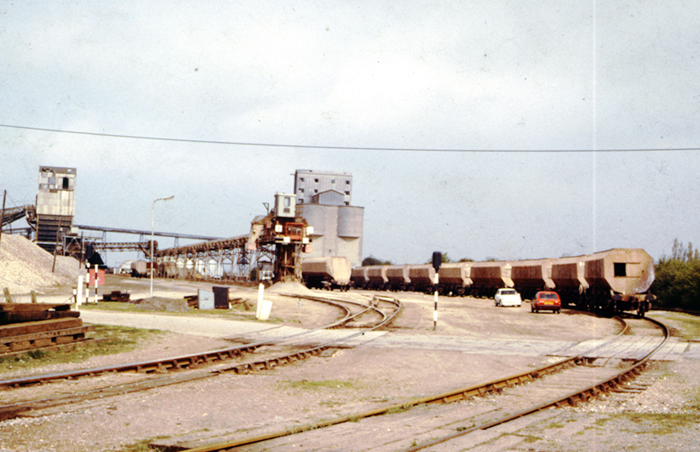 A panoramic view of the sidings at the Brett Marine Aggregates Terminal. The overhead tripper conveyor, seen in the centre, could load either hopper or open type wagons standing on either side of the structure. The Brett (formerly Marinex) hopper wagons, stabled on the right-hand siding, normally operated as an 18-wagon train conveying sea-dredged sand and ballast to the Brett terminals at Purley and Salfords. The large concrete structure in the background was the former cement works loading silos. © David Morgan 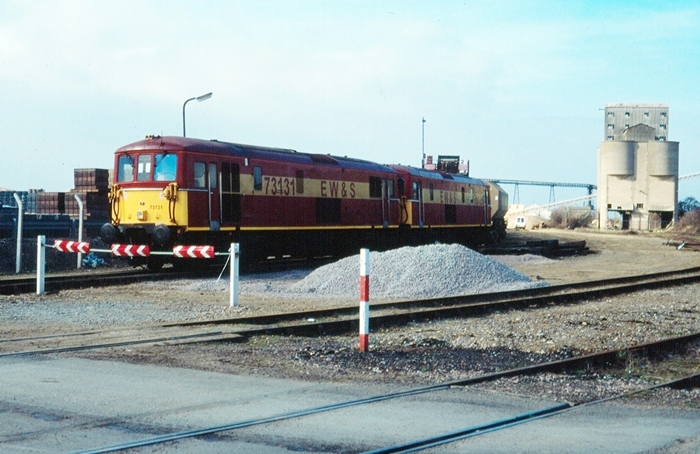 On a Tuesday afternoon, Electro-Diesel Nos. 73131 and 73128 are seen positioning empty hoppers at the gravel terminal, after arriving with the 09:36 working (6Y94) from Purley and Salfords. From Hoo Junction onwards, the pair had been running on diesel power. © David Glasspool