Since their emergence from Ashford in 1901, the Wainwright Class D 4-4-0 locomotives had been the primary motive power on Kent Coast services, being the South Eastern & Chatham Railway's first true express passenger design since its formation in 1899. Engines such as this could now be developed as a result of the co-operation between engineering departments of the former SER and LC&DR. Indeed, it was the leading figure of the former SER's carriage and wagon department, Harry Wainwright, whom worked with the former LC&DR's Chief Draftsman, Robert Surtees, to produce a number of new and practical locomotives which would outlive both their designers and the company they worked for. Engine developments such as this came at a time when the SE&CR was regarded among the public poorly, a reputation generated during the bitter years of its previous constituent companies, thus deployments of D Class were joined by the launch of a new, elaborate and striking livery to win back favour from passengers. This livery programme began to win the SE&CR praise and locomotive applications in this colour were perpetuated, only to be curtailed in 1914 by the beginning of World War I. Thereafter, stock was required to appear in less conspicuous colours, dull grey or a plain shade of green soon appearing on motive power, with plain brown being applied to passenger rolling stock.

Now onto the specifics of the D1 Class itself. In 1913 Richard Maunsell had succeeded Harry Wainwright as Chief Mechanical Engineer of the SE&CR after a transfer from the Glasgow & South Western Railway. Maunsell's early work in his new role included the partial rebuilding and modernising of existing locomotive designs, the first of which was the conversion of eleven E Class engines to ''E1'' between 1919 and 1921. Major modifications to existing designs were undertaken to produce comparatively light weight express locomotives (taking into account axle weight restrictions in the region) which were powerful enough to handle the heavier passenger trains materialising at the time. Success with the E1 Class led to a protracted programme of converting twenty-one D Class locomotives into what would become ''D1'' Class between 1921 and 1927, the machines of which would be virtually identical to the E1s. The initial ten selected D Classes were moved to renowned Beyer, Peacock & Co's manufacturing plant in Gorton, East Manchester for the work to be done (the SECR had enlisted the services of this company for locomotive building in the past). Ashford Works lacked the required space at the time, although the second batch of eleven locomotives were completed here by 1927.

The type now featured a larger superheated boiler over the D Class predecessor, a Belpaire firebox and long-travel piston valves. Beginning with the last, typical valves control the access of steam pressure to a locomotive's cylinders - the higher the pressure, the faster the piston motion backwards and forwards. The advantages of incorporating long-travel valves into engines such as the D1 Class included greater power, coupled with greatly improved fuel consumption. The valves would close after letting only a small amount of steam into the cylinders, allowing the steam time to expand, then would re-open on the piston's return stroke, sending the expanded steam to the exhaust valve at the lowest possible pressure. Thus in short, a smaller amount of steam pressure could now undertake more work. Moving on to the Belpaire firebox: of Belgian origin, its construction was stronger than its predecessor fitted to the D Class as a result of its square shape, this of which allowed a greater heating surface area (approximately 20% more) compared to traditional fireboxes. Traditional fireboxes followed the round profile of their boilers above the locomotive frames. This was particularly useful on engines of the British railway system in general, which were built to a restrictive loading gauge compared to their counterparts on the Continent. Lastly, the boiler itself now incorporated superheater elements, which would heat the steam to a temperature much higher than the boiling point corresponding to its pressure. In brief, the superheated steam is more expansive than that without the superheating elements, thus once again more work can be squeezed out of a reduced amount of steam.

The ''D1'' engines began life with Ashford allocation and like their ''E1'' Class sisters, could be found on virtually the whole of the South Eastern Division, particularly on London to Kent Coast services via both the ''Chatham'' and ''Tonbridge'' routes, and even the North Kent Line when on Summer and Bank Holiday specials, or freights. Naturally, the class became stabled at Ashford's sub sheds, notable recipients of the type being Faversham, Tonbridge and Gillingham. From the outset, these were primarily passenger-hauling engines, but they did not retain the elegance of the D Class. The engines remained prominent on the ''Chatham'' main line, fronting expresses right up until its electrification in June 1959. Naturally, this led to numerous withdrawals, but a number of ''Chatham'' examples were re-allocated to Eastleigh, and employed on South Western Division workings, particularly local services to Salisbury. As far as Kent was concerned, the ''D1'' Class was left with just two regular turns: the 07.24 London Bridge to Ashford service, along the ex-SER ''cut-off'' line, and that of piloting the ''Night Ferry''. The last members of the class were withdrawn in November 1961.

On 10th June 1961, No. 31739 was observed at Tonbridge, fronting the 07.24 London Bridge to Ashford service. By this time, the type's only regular duties were this specific diagram and that of piloting the ''Night Ferry''. © Bryan Benn 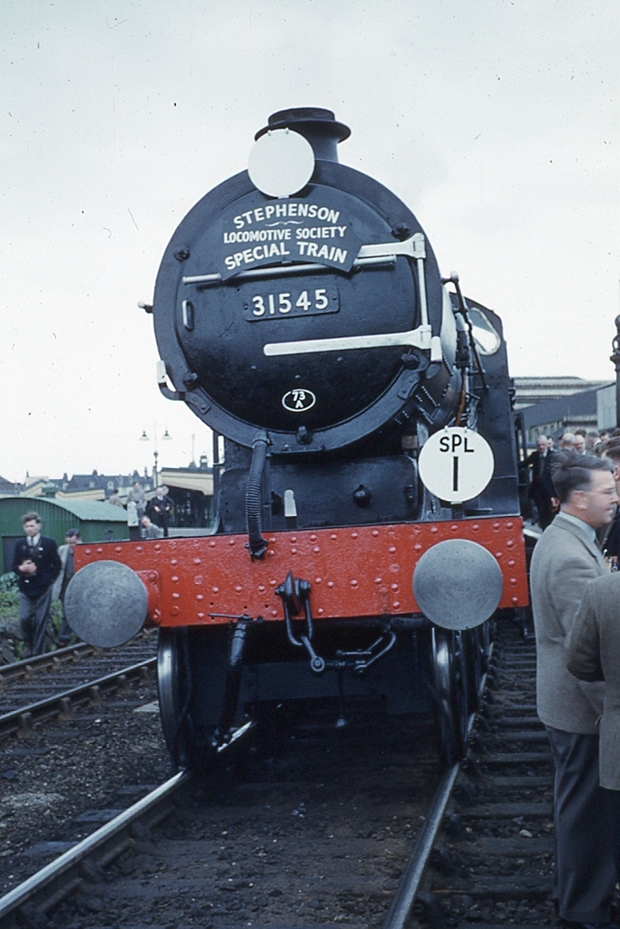 On 19th May 1957, No. 31545 fronted a six-carriage-long special for the ''Stephenson Locomotive Society''. It is seen here at Margate, having come from Victoria via the ''Chatham'' main line. It subsequently visited the East Kent Light Railway, Dover Marine, and the Folkestone Harbour branch, returning to Holborn Viaduct via the ''Chatham'' route. © David Glasspool Collection