For a station which was commissioned to serve a northern suburb of Ramsgate, rather than a town in its own right, Dumpton Park was surprisingly well equipped. A substantial station building, commodious platform and canopy, with vacant land available for expansion, the infrastructure here was arguably more lavish than that on offer at established resorts such as Herne Bay and Whitstable. Today, however, the story is very different. Severe rationalisation, perhaps even "official vandalism", has transformed a well-appointed site into a rather unloved suburban backwater.

The station formed part of the Southern Railway's (SR) rationalisation of railway lines on the Isle of Thanet. A legacy of 19th Century competition between rival South Eastern (SER) and London Chatham & Dover Railways (LC&DR), the scheme involved closing the former's branch from Ramsgate (Town) to Margate (Sands) and the latter's spur to the seafront at Ramsgate Harbour. A double-track loop line of 1½-mile length was laid to connect the SER's line from Minster with the LC&DR's line from Broadstairs. Most of the loop was laid within a chalk cutting and, as reported in The Railway Magazine at the time, the excavation of this was subcontracted by the SR to engineering firm Sir Robert McAlpine:

Work is now being commenced by the contractors, Sir Robert McAlpine & Sons, on the new line and alterations which will link up the at present more or less separate Southern Railway lines in the Margate and Ramsgate district.

"Dumpton" is the name of the suburb, whilst "Dumpton Park" was once a large area of parkland, complete with deer, located north of the present railway station. The parkland was mostly turned over to residential development post war, the majority of this occurring in the 1970s. Indeed, the only section of Dumpton Park which remains undeveloped today is that part used by Broadstairs Cricket Club.

Now let's turn our attention to the railway station infrastructure. The SR's "Thanet Loop" was commissioned to public traffic on 2nd July 1926, but because of a coal strike taking place at the time, the opening of Dumpton Park station was delayed as an economy measure until the 19th. At the site, the SR purchased enough land for a large station comprising two island platforms serving four tracks, situated within a wide cutting. This was with the foresight of increasing residential development in the area, plus an element of holiday traffic. In the Locomotive, Railway Carriage and Wagon Review (Locomotive Publishing Company, 1936), the site was described as follows:

The station at Dumpton Park is close to the Greyhound Race Course and is quite a pretentious building augmented by a clock tower and equipped with a refreshment room.

The station building mentioned was built to a similar design as the contemporary example at Broadstairs; a symmetrical affair of brown brick construction frescoed with a belfry. Given the railway was in a cutting at this point, the decision was taken to construct the main building at high level, on a site immediately south of the line. Down at railway level, only one island platform was ever built, this being of concrete construction and extending to a length of 820-foot. Of this length, 330-foot was protected from the elements by a generous 50-foot-wide canopy equipped with a plain riveted steel valance, under which were also brick-built offices. The same design of canopy was brought into use by the SR at Herne Bay and Dover Priory stations, examples of which survive today. To link the island platform with the staton building, a fully enclosed glazed footbridge, equipped with a lift, was provided at the eastern end of the site. Finally, just beyond the eastern end of the island was provided a small lamp hut, adjacent to which was the station's signal box. Of the latter, this was a hut of tongue-and-groove timber construction, its size akin to that of a garden shed.

Conductor rails were in evidence at Dumpton Park in 1958, as part of the Kent Coast Electrification Scheme. The full accelerated electric timetable via Chatham came into force on 15th June 1959; on 19th of the following month, the signal box at Dumpton Park closed. However, this was trivial compared to what lied in wait for the station. Rationalisation during the 1970s resulted in the demolition of the "high-level" station building and the platform offices. The platform canopy was mostly abolished: just four struts were retained, these of which were fitted with a token pitched roof of 35-foot-length. In keeping with these measures, the footbridge lost its roof, glazing, and lift shaft, and the site once set aside for a second island platform became even more overgrown. Located in-between mileposts 78¼ and 78½ from Victoria via Faversham, upon a curve restricted to 30 MPH, Dumpton Park has become one of the county’s most bleak and uninviting stations. 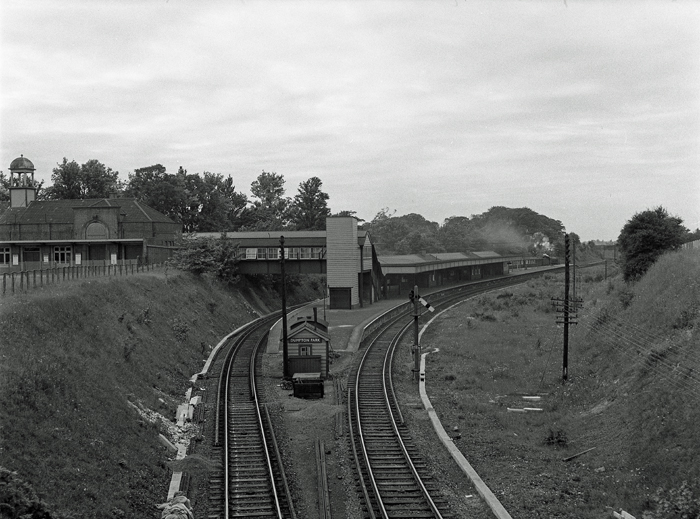 How it used to be. A westward view in 1958 shows the station in the form as commissioned by the Southern Railway in 1926. In the foreground, beyond the end of the island platform, is the diminutive signal box, which was a year from closure. Behind the signal box, with the curved roof, is the lamp hut. The station building was at high-level and, as can be seen, was built along similar lines to that which still exists at Broadstairs. The generous platform canopy had a plain valance of the riveted steel type and the same design can still be seen today at Herne Bay. Passengers even had the luxury of a fully enclosed glazed footbridge, which incorporated a lift. The large vacant space on the right was never host to any sidings, but was set aside at the planning stage for a second island platform, this of which never came to fruition. Conductor rails are already in place and electric working was under a year away. In the background can just be seen a rake of Pullman cars being headed by an N15 "King Arthur" class, Ramsgate-bound, suggesting that this is the outward working of the "Kentish Belle". This summer-only train ran from Victoria to Ramsgate via Herne Bay, and this photograph shows the service in its last season. A. Jackson © David Glasspool Collection 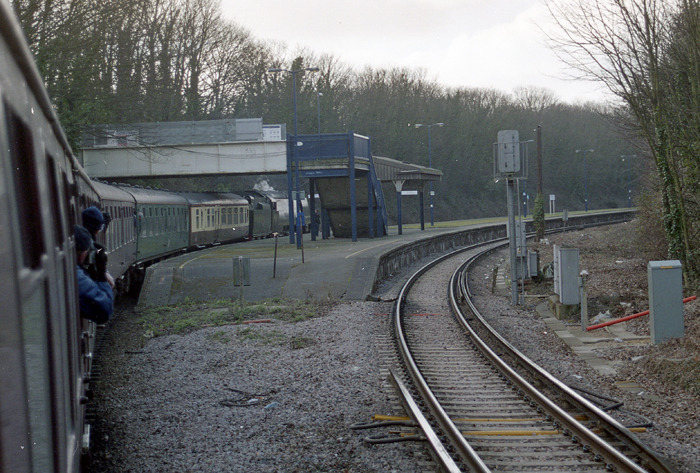 Steam traction again, but this time with Unrebuilt Battle of Britain Class No. 34067 "Tangmere" rounding the curve with a circular tour of Kent. The scene was now a bleak one: the footbridge had lost its roof and glazing, passengers now being exposed to the elements, and the lift had gone; the canopy had been severely cut back to a token effort and a makeshift pitched roof added on top of the four remaining columns. As mentioned in the main text, the station building was demolished and for many years its site laid empty; houses were subsequently built on it in the 1990s. A sad end for a station which was once well provided with facilities, but at least the SR's structures at Ramsgate, Broadstairs, and Margate survive. © David Glasspool