This ultimately became a large and attractive layout, in addition to existing as an important junction of Kent Coast lines. The South Eastern Railway had begun running train services between London and Dover on 7th February 1844, after the piecemeal opening of the trunk line from Redhill. Soon, the company turned its attention to the creation of a suburban railway network, which resulted in the opening of the North Kent Line between the capital and Strood, via Dartford and Gravesend, on 30th July 1849. Thereafter, the SER enjoyed a monopoly of rail traffic in Kent – however, it was not long before potential competition was on the horizon. Rather than extending the North Kent Line eastwards, to serve the towns to Rochester, Chatham, and Gillingham (New Brompton), the SER instead set upon a southerly route through the Medway Valley, to fill the 10¾-mile gap between Strood and Maidstone. The latter had been opened on a northward branch from Paddock Wood in 1844. The SER’s proposals sparked considerable concern for those communities east of the Medway and beyond, and action to counter this was to be taken. Faversham became the ‘’home’’ of the ‘’East Kent Railway’’ (EKR) when, on 4th August 1853, Royal Assent was received by a group of businessmen based in the town, for the construction of a 48½ -mile line from Canterbury to Strood. This would run via Faversham and act as a feeder to the SER’s North Kent Line. The Faversham to Chatham section of the EKR’s route came into use on 25th January 1858, and this was followed on 29th March of the same year by the extension of the line over the Medway to meet the SER’s metals at Strood. The EKR was granted running powers, by the original 1853 Act, into the SER’s station here, but the company was unable to secure running rights over the North Kent Line. It had been proposed to run EKR services over SER metals in order to reach the network of the West End of London & Crystal Palace Railway. However, the SER countered these proposals on the grounds that the North Kent Line was already operating at full capacity. Consequently, the EKR was granted powers for the building of an independent route to the capital. Initially, however, from St Mary Cray westwards, the company would be unable to avoid paying tolls to other companies for the use of their metals. The EKR renamed itself the ‘’London Chatham & Dover Railway’’ on 1st August 1859 and soon began commencing scheduled services over a series of routes:

Those eastward extensions from Faversham, which followed the north Kent Coast, were constructed by the independent ''Herne Bay & Faversham Railway''. This company had been formed in 1857 and during its lifetime, had been subject to a pair of new names:

The company’s metals were leased and worked by the LC&DR from the outset, and the latter subsequently absorbed the smaller concern in 1871.

The layout of the first station at Faversham was readily comparable with that which is still in existence at Sittingbourne – in fact, the pair were mirror images of each other. Both sites incorporated an island platform: whilst that at Sittingbourne was built on the ‘’down’’ side, that at Faversham was instead positioned beside the ‘’up’’ running line. The substantial station building at the latter was located on the ‘’down’’ platform, and was built to the same design as that at Sittingbourne (albeit in a mirror-image fashion), being two-storeys high and constituted of yellow brick. Finally, an eastward-facing ‘’down’’ side bay platform was in existence at Faversham, and this appears to date from the opening of the Whitstable extension. Whilst Sittingbourne enjoyed the benefits of a large, triangular-shaped overall roof, Faversham had to make do with a rather meagre, short pitched-roof canopy on the island platform. The main station building here was also only equipped with a small flat-roofed canopy, this being integrated within the structure in the same fashion as the canopy at Shepherds Well. Being a terminus affair in 1858, Faversham was host to an engine shed. This was a two-road dead-end affair positioned to the west of the station, beside the ‘’up’’ line. Goods sidings were also in evidence here, a trio of eastward-facing tracks residing alongside the bay line. The layout was signalled by outside contractor Saxby & Farmer, and one of this company’s attractive cabins appeared to the west of the ‘’down’’ platform, alongside a level crossing. The signal box lacked a brick base: it was a single-storey all-timber affair, with a pyramid-shaped roof. Also worth noting at this point is the Faversham Creek branch; this single-track opened in 1860, with the Whitstable extension. The line connected with the ‘’down’’ sidings alongside the bay platform, and it appears that the track could only be accessed after a reversing manoeuvre. The route assumed a sharp turn northwards, thus the branch was soon at a right angle to the running lines.

Change had started to occur at the site in the earliest years: in 1860, in connection with the opening of the single-track Whitstable line (doubled on 5th October 1863), a replacement engine shed was commissioned. This was a westward-facing, two-track, dead-end affair, of just over 200 feet in length, and was positioned within the V-shape created by the diverging lines. Complete upheaval of the site was to occur thirty-seven years later. In the latter years of its existence, the LC&DR began to reconstruct a number of earlier station builds as more modern, spacious affairs. This appears to have begun at Chatham, in 1886, with the erection of an attractive ‘’high-level’’ station building straddling the tracks – such a design permitted more platforms to be inserted at track level. Bickley and Bromley were rebuilt in a similar fashion during 1893/1894, and in October 1897, a complete rebuild of Faversham commenced. This eventually produced a large, well laid-out arrangement comprising a pair of 710-foot long island platforms upon the site of the original station. For crews needing to refill their engines with water for the onward journey, water columns existed at the western and eastern ends of the ‘’up’’ and ‘’down’’ islands respectively. Upon the platforms were single-storey crème brick waiting rooms and offices, complete with arched orange-lined window frames, and these in turn were protected by a pair of ornate flat-roofed canopies, measuring some 395-feet in length. The platform buildings were to the same design as those structures which emerged at the contemporary Bickley and Bromley rebuilds, and were arranged in blocks of three on each platform. Substantial station entrances were built on both ‘’up’’ and ‘’down’’ sides of the site, although notably, that on the latter was the largest. The nature of the island arrangement here ensured that these buildings were isolated from the platforms, a subway linking all areas of the station. Indeed, they were not even centrally-located, but rather, positioned in line with the western ends of the platform surfaces. The ‘’up’’ building was a single-storey rectangular structure, built to the same design outline as those ‘’high-level’’ buildings at Chatham and Bromley, and measured 50-foot across by 30-foot deep. Emanating from its eastern elevation was the roof of the subway entrance, this measuring some 120-feet in length and featuring crème brick side walls, complete with roof glazing. The main section of the ‘’down’’ side station building demonstrated increased dimensions over its ‘’up’’ side counterpart, being 58 foot in length by 42 feet in depth. Attached to its western elevation was a 35-foot-long appendix, again of crème brick construction, with a pitched-roof. The subway entrance roof here, also extending from this building’s eastern elevation, was marginally longer than that of its ‘’up’’ side counterpart, extending for 125-feet. Finally, straddling the tracks at the eastern ends of the platforms was a public footbridge, of lattice construction and measuring 135-feet in length. 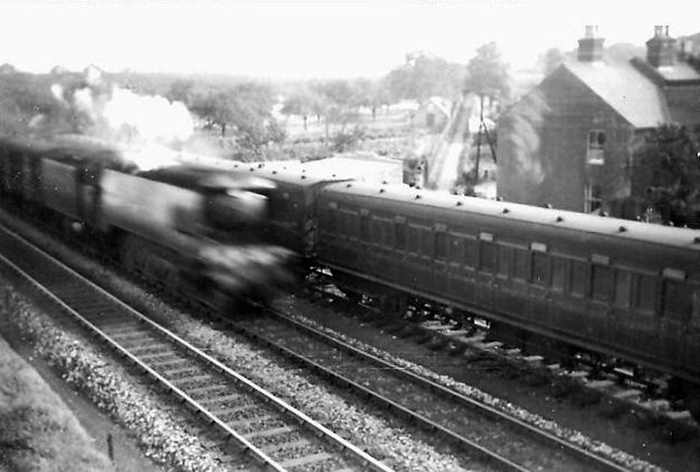 Unrebuilt Bulleid Light Pacific No. 34104 ''Bere Alston'' is too fast for the shutter speed, as it hurries past on the

''up'' main from Dover. This photograph was taken from the southern section of the huge lattice footbridge

spanning the tracks at the eastern end of the station, near the engine shed. At this time, non-corridor stock

was still in evidence in the berthing sidings and of course, third rail was absent. 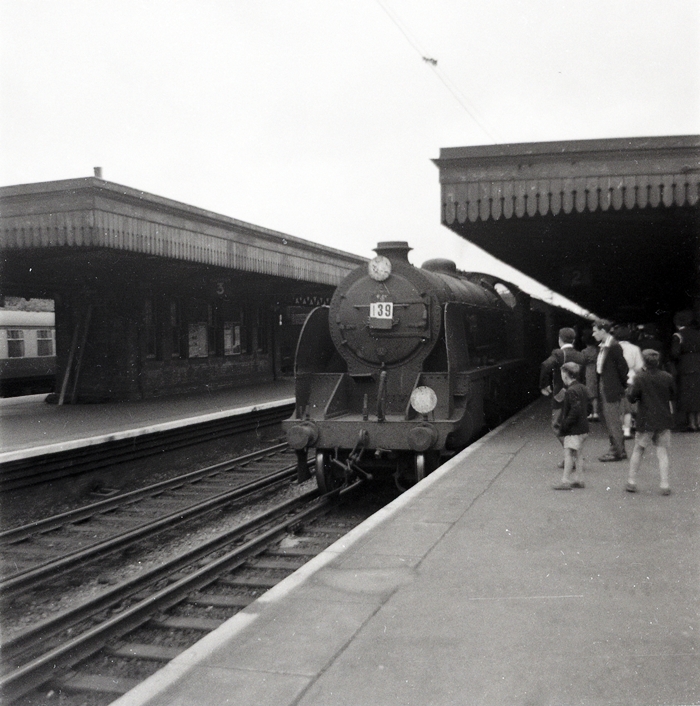 on the running lines shows electrification is imminent. The splendid canopies and crème-brick platform offices

remain to this day. Note the Blood & Custard BR Mk 1, which can just be seen on the far left, parked in the

''up'' loop siding. The latter is still in use today. © David Glasspool Collection 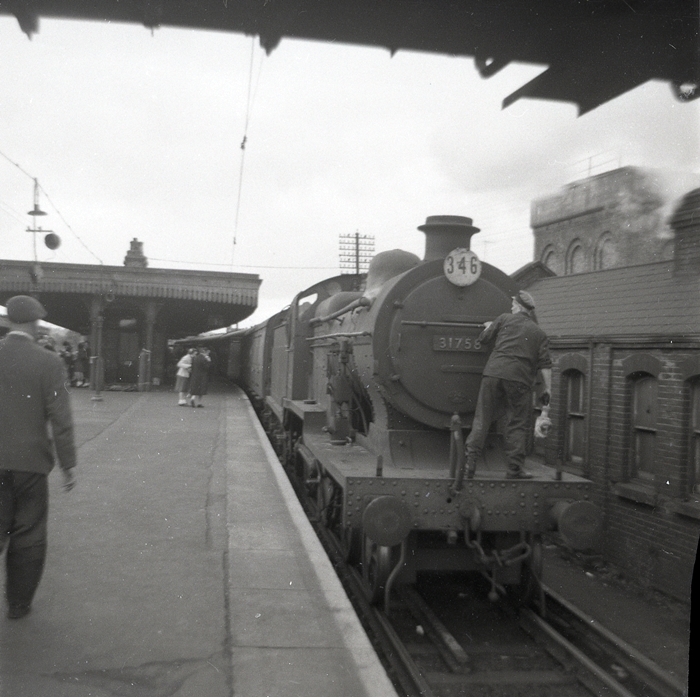 The isolated water tower can be seen at the top right of this photograph, depicting ex-SR L1 Class 4-4-0

in evidence on the platform. No. 31758 was nearing the end of its days when the above photograph was