During January 1959, twelve ex-GWR Collett-designed Pannier Tank engines were re-allocated to the Western and Eastern Sections of the Southern Region, these engines being of Class 5700. Rapid dieselisation and the decline of branch line freight work on the Western Region saw several engines of this numerous breed become surplus to requirements. The GWR had favoured the Pannier Tank design over its earlier Saddle and conventional Side Tank locomotive variants in light of the maintenance advantages it brought: the suspension of the water tanks around the boiler, rather than on the side running boards, permitted easy access to engines’ internal motion gear and valve systems. Secondly, in the early part of the 20th Century, ‘’Belpaire’’ fireboxes started becoming features of British locomotives, and not just those of the GWR. Hitherto, fireboxes had followed the curved profile of their attached boilers, which, in part, helped to keep an engine within the comparatively restrictive British loading gauge. The Belpaire firebox was a Belgian product, and unlike its predecessors, was square rather than round in shape; this design consequently offered a larger heating surface area compared to traditional fireboxes. The very fact that these components were now square meant that it was particularly difficult to place a curved saddle tank upon the entirety of the boiler section of a locomotive. The solution devised was to bolt the water tanks to the side of the boiler, effectively giving the engine ‘’ears’’.

Indeed, WR Pannier Tanks had started to become part of SR shed lists before the aforementioned January 1959 re-allocations. Regional border changes in February 1958 had seen the engine shed at Weymouth transfer from WR to SR control, which resulted in the latter acquiring thirteen pannier tanks divided among Classes 1366, 1400, and 5700. The engines’ main raison d’être was to negotiate the Weymouth tramway, hauling both freights and the carriages of Channel Islands boat trains. Until its closure to passengers in 1952, and latterly goods in 1965, the fleet of Panniers here were also employed on the branch to the Isle of Portland, where they replaced ex-LSWR O2 Tanks. The Yeovil Pen Mill line, too, came under SR control during February 1958, and the closure of the shed at this station (71H – formerly 82E) in January 1959 saw the re-allocation of seven Pannier Tanks, all these being of the 5700 variant, to the existing depot at Yeovil Town (72C). Yeovil Town itself was recoded to a WR depot in December 1962 (83E), as further regional border changes saw all SR lines west of Salisbury transfer to the former’s control.

As part of the previously mentioned 1959 re-allocations, Nine Elms (70A) initially received six engines of the 5700 variant, all but one of these formerly being Welsh-based. They were drafted in to replace the majority of the Drummond ‘’M7’’ 0-4-4 Tanks on empty carriage stock workings between Waterloo and Clapham Junction sidings. The Panniers were not well received by the Nine Elms footplate crews, who were sad to lose their long-standing ex-LSWR products. Compatibility problems concerning the locomotives' vacuum braking systems with SR coaching stock, perhaps augmented by the prevalent rivalry between Southern and Western Regions, ensured that the 5700 Class became an unpopular type in this ''foreign'' territory. A further six of the type arrived on the Eastern Section at Dover (73H) in the same month, operating off this depot's sub-shed at Folkestone Junction. Here they were destined to supersede the ex-SER ‘’R1’’ Class 0-6-0 tank engines on Folkestone Harbour line banking duties. The R1 Class had survived on these workings much longer than originally envisaged; the Southern Railway had conducted trials along the Folkestone Harbour branch in the early 1930s, using much more powerful ‘’Z’’ Class 0-8-0 and ‘’W’’ Class 2-6-4 engines to assist boat trains. Although such tests were taken no further, these large and powerful freight tanks were, nevertheless, used extensively on the South Western Section to bank SR trains out of Exeter St David’s and up the incline to Exeter Central. The Folkestone Panniers themselves lasted only until the latter part of 1961; in September of that year, re-allocations began with two locomotives leaving for the South Western Division, and another for the Eastern Section's primary – but declining – shed at Stewarts Lane. The final members disbanded in the November, again bound for the South Western Division.

By the end of 1963, Nine Elms had acquired a number of BR Standard Class ''3'' 2-6-2 Tank Engines, cascaded from the Midland and North Eastern Regions. These Swindon-designed machines swiftly replaced the 5700 Panniers on empty carriage stock workings, and were much more popular with the SR locomotive crews. The SR already had allocations of the type at Eastleigh and, until its recoding to a WR depot in December 1962, at Exmouth Junction. Pannier No. 4686 had been permanently withdrawn by the SR as early as August 1959, although the numbers were later made up with the acquisition of No. 3633 from Danygraig (87C) in April 1960. On the advent of the BR Standard ''3'' tanks, SR Panniers were drafted out deeper into South Western Division territory. The transfer of those lines west of Salisbury from SR to WR control in September 1962 saw a few of the former Nine Elms engines return to WR ownership.

Also of interest is the piecemeal sale of thirteen 5700 Pannier engines by the Western Region to London Transport (LT). To start the ball rolling, LT purchased No. 7711 in October 1956, which had been withdrawn from St Blazey (83E) in this month. No. 5786 followed in April 1958, from Cardiff Canton. The deployment of these useful ex-GWR tank engines allowed LT to phase out its existing fleet of elderly, but elegant, E Class 0-4-4T tanks, the first of which had emerged from Neasden Works in 1898. By May 1963, LT had accumulated a fleet of eleven Panniers, although to date, thirteen had been purchased from the WR. The pioneer engine, No. 7711 (renumbered by LT to L90) was withdrawn from service in October 1961, and Oxford-based (81F) No. 7760 was acquired in December of the same year to replace it. Similarly, Didcot-based No. 5752, originally purchased by LT during February 1957, was withdrawn from service in November 1960 and replaced by No. 5757, formerly of Westbury (82D), in December of that year. The Panniers were not used to haul passenger services on the London Transport network, but rather, were employed on night engineering services, used for yard shunting, and deployed on spoil workings to LT's Watford waste site. The final locomotives on the LT system remained in service until June 1971.

*This locomotive was the first to be tested on the Folkestone Harbour branch, but afterwards received Nine Elms allocation. 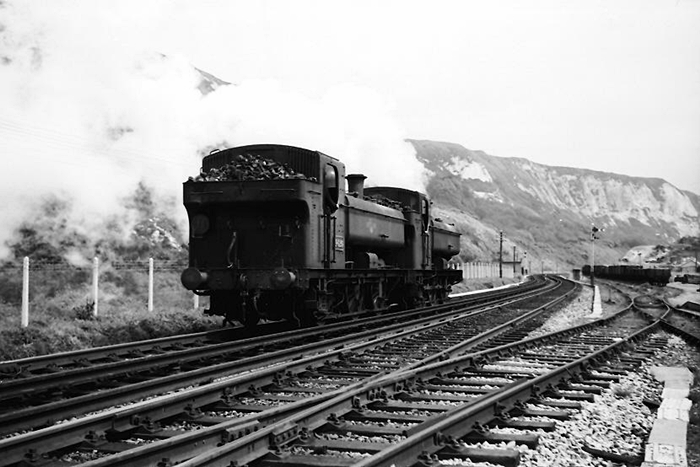 With Abbotscliffe in the background, Pannier Tank No. 4626 is seen proceeding along the coastline with a

classmate, at Folkestone Warren, Dover-bound, during 1961. No. 4626 survived for the longest period of

time under Southern Region auspices, not being withdrawn from Salisbury (72B) until March 1964. The

majority of its counterparts had found their way back to Western Region territory. 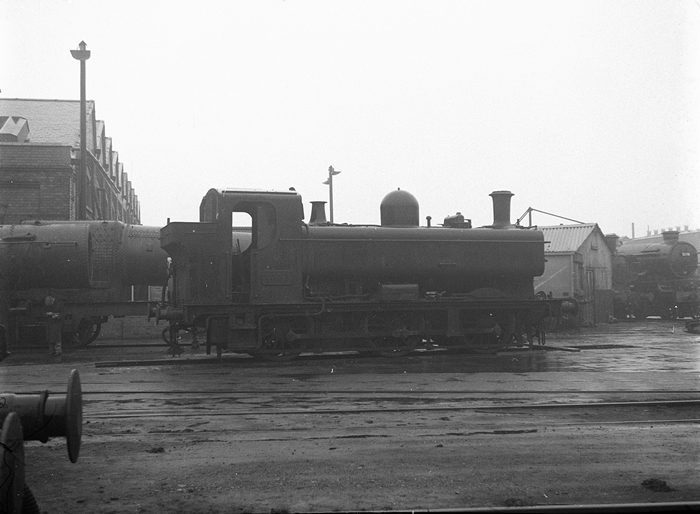 Pannier Tank No. 3677 is seen at Swindon Works. On the right, in the background, can just be seen Castle