As recounted in the website's Gravesend Central section, the town's relationship with the railways began in 1844 when a small independent concern known as the ''Gravesend & Rochester Railway'' built a line linking Denton (on Gravesend's eastern outskirts) with Strood, utilising the 2¼ mile long Strood Canal Tunnel. However, extensive railway progression in the area initiated on the coming of the South Eastern Railway’s North Kent Line. This was opened throughout from North Kent Junction (two miles east of London Bridge) to Strood, via Lewisham and Dartford on 30th July 1849, and for a number of years the SER enjoyed a monopoly of the area.

On 18th July 1881 a small independent concern known as the ''Gravesend Railway'' was established, directly instigated by the expanding London Chatham & Dover Railway. Its raison d'etre was to construct a five mile line to Gravesend, which would branch off the main ''Chatham'' line approximately 2¼ route miles east of Farningham Road (the point of divergence becoming known as ''Fawkham Junction''). Unsurprisingly, the smaller Gravesend Railway was absorbed by the LC&DR in 1883, during the line's £250,000 construction. Previously, in 1882, the smaller company had also been granted permission to modify the existing plans to incorporate a short rail extension to the edge of the Thames, where it would build a pier station allowing trains to connect with cross-river and continental steam ships. The branch to Gravesend (C&D), double-track from the outset, was formally declared open on 17th April 1886, but it was not until the 10th of the following month that passenger trains commenced. The route mileage from Victoria to Gravesend was greater than the SER's line from Charing Cross, the two comparing 27½ and 24 miles respectively. The opening of the line was not without incident, however, as unrest was brewing at the Gravesend portion of the branch: obstructions were assembled across the station threshold by local landowner, Lord Darnley. The Lord was unhappy with the permission granted by Parliament to allow the railway company to use his roads which surrounded Gravesend (C&D) station. However, the dispute was short-lived and the obstructions were removed by the railway company a matter of minutes before services officially commenced.

The SER need not have worried to any great degree about the LC&DR branch being a threat to its North Kent services - after all, the SER boasted a route with quicker journey times and the company had been established in the town long before the belated venture of the LC&DR. In optimism for the passenger numbers to Gravesend to increase, the LC&DR ran a plentiful service of fourteen trains each way on weekdays, supplemented with a Sunday train service of eight trains in each direction. However, it was not just the SER and LC&DR which were competing for Gravesend traffic; there was the seemingly less conspicuous ''London Tilbury & Southend Railway'' operating north of the river. This company offered passengers the attractive prospect of cheap through fares to Gravesend from Fenchurch Street. The company had built a short spur off the Southend line to a terminus called ''Tilbury Riverside'', operating a boat service from here and over the Thames to Gravesend Town Pier. The LT&SR had commenced this service in 1854, five years after the SER had arrived on the scene. The LT&SR actually put forward proposals in 1881 for a direct rail connection from Tilbury to the metals of the LC&DR, by means of a tunnel under the Thames. This would have at least given the SER a little more concern over the potential loss of North Kent Line traffic, and may have provided the LC&DR branch with some added importance. The LT&SR was, however, a company short of money and its main concentration at the time was competing with the Great Eastern Railway for Southend traffic. Thus, the Gravesend operation remained with the ferry crossing, this being perpetuated by the Midland Railway when it absorbed the LT&SR in 1912, and then by the London Midland & Scottish Railway from 1923 onwards.

The layout at the LC&DR’s Gravesend terminus was an intriguing one. Essentially, two platform faces were available, these organised in a fashion similar to a right-angled triangle. Both platforms were served by a triple-track formation, one of these arrangements continuing onto the pier and further splitting to provide five terminating lines. The triangular arrangement saw that the main buildings and forecourt were unusually concave, at the end of an upward-slanting approach road. The architecture employed here was not instantly recognisable as typical LC&DR, but the general style had been seen before at the original Swanley Junction station. However, with the SER already having a firm presence at Gravesend, augmented by a magnificent station, the LC&DR needed a more elaborate version of the unassuming building at Swanley. This seemed to be achieved by utilising a succession of pitched roofs and incorporating arched double doors and a clock face within the main approach façade. The building did acquire an imposing element, especially as a result of the aforementioned frontage, which gave the station a somewhat gothic air about it. The window frames here were familiar: identical examples can still be found at Otford, Sole Street and Shepherds Well, to name but a few. The site was a tale of two extremes; the western elevation, which backed onto the ‘’pier’’ platform, was wholly timber in its construction, a measure which was presumably implemented to limit weight on the elevated track bed, rather than for deliberate cost-cutting reasons. The pair of canopies here also followed the curvature of the platforms, each diverging away from each other to create a ‘’V’’ shape. Triangular in cross-section, it would seem that they were based on a standard LC&DR design - almost identical examples were erected at the rebuilt Chatham station about eight years later. An all-timber two-storey-high signal box, boasting a gabled roof and built by the contractor ‘’Railway Signal Company’’, was positioned at the south western extremity of the layout, this naturally being the location where the double-track branch fanned out into numerous sidings. Since this was a terminus station, a fifty-foot turntable was provided on the opposite side of the running lines to the signal cabin. Interestingly, however, no shed existed at the station for locomotives to stable in overnight, these evidently running directly off Stewarts Lane, but a water tower was included from the outset. 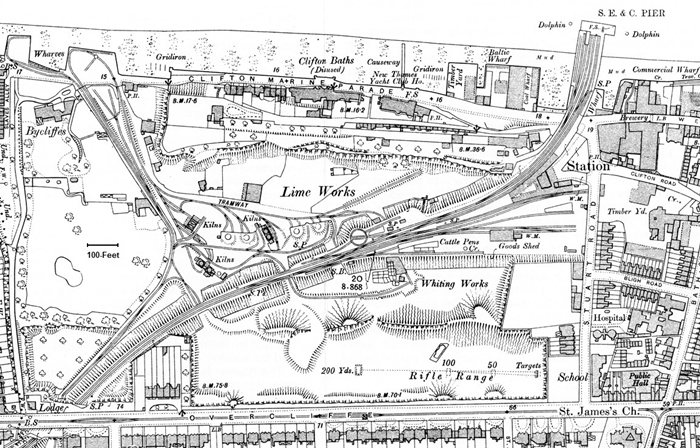 Gravesend West Street, 1909. The ''V-Shaped'' nature of the station can be appreciated here, the main building being situated within the fork of the diverging lines. Click the above for a larger version. 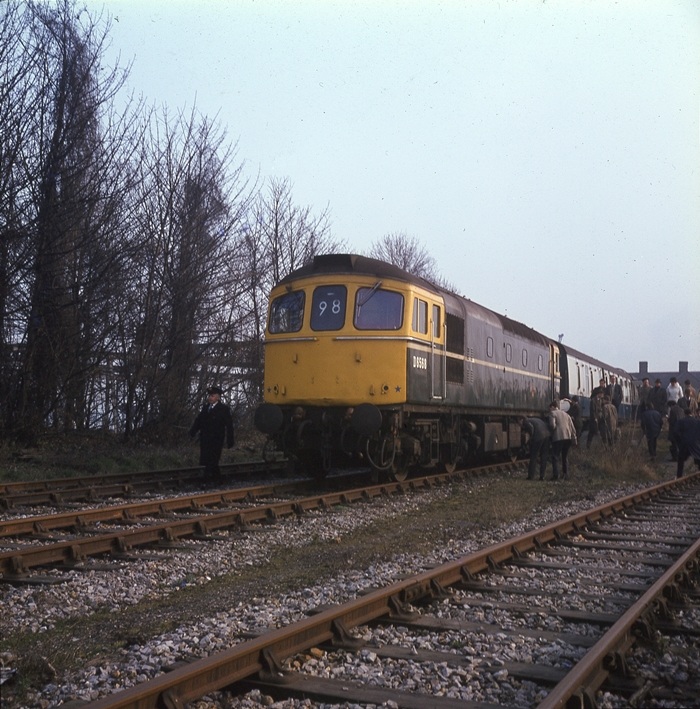 Type 3 diesel No. D6568 (later Class 33 No. 33050) is seen at Gravesend West in the month the site was formally closed to all rail traffic. It was hauling ''The Invicta Rail Tour'', which had arrived from Blackfriars via Herne Hill and Bromley South, before completing a larger circuit of Kent on ex-LC&DR and ex-SER lines. In the above view, the tracks can be seen splitting for the triangular-shaped platform surface, the end of which is just visible to the right of the train. The run-a-round loop for the main passenger platform, which extended onto the pier, can be seen to the left of No. D6568. © David Glasspool Collection 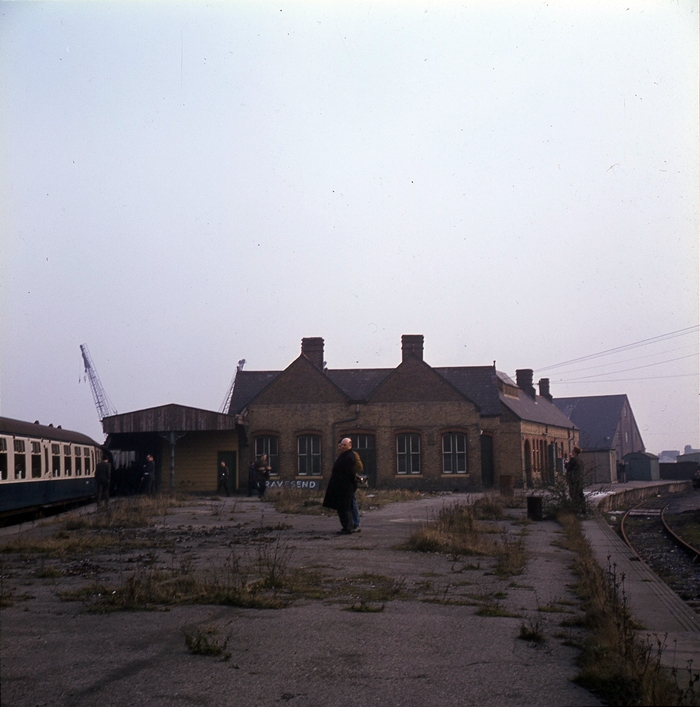 Now on the platform, looking north east, this photograph affords a splendid view of the main station building. All sides of the structure were once host to canopies, but these had since been taken down and only a truncated section was left standing on the platform which led to the pier (on the left). The goods yard is out of view, beyond the platform line seen on the right. © David Glasspool Collection 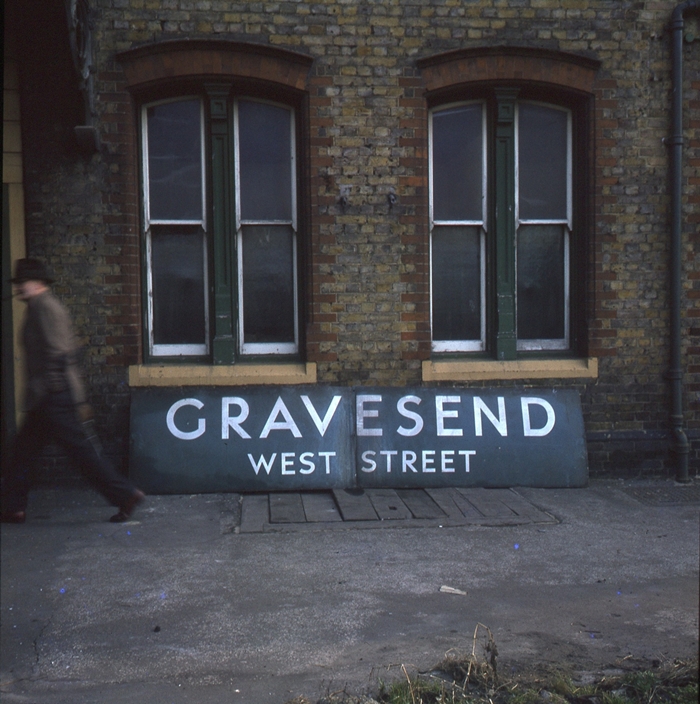 Two halves of the station's former nameboard were to be found on the platform floor. The station had for long been known as ''Gravesend West'' by this time, the ''Street'' suffix having been dropped as far back as 26th September 1949, but the nameboard still harked back to the old title. This nameboard can be seen in the background of the previous photograph. © David Glasspool Collection