As was the case at Chelsfield, Grove Park station was provided at the request of a local landowner, but unlike the former, it opened later than the Tonbridge cut-off line of 1868, instead coming into use on 1st November 1871. Naturally, its later opening date did not come at the expense of an idiosyncratic SER layout, and two staggered platform faces resided either side of the double-track from the outset. Like the majority of its counterparts along the line, the main station building, positioned on the ‘’up’’ side, was single-storey and fabricated from clapboard. It was provided with an ornate canopy extending over the platform, this demonstrating the then common pointed ‘’icicle’’ valance. The ‘’down’’ side, whilst lacking a station building, was treated to equally good weather protection, and a virtually identical canopy to that on the ‘’up’’ platform, was installed. As per the ‘’down’’ side at Chelsfield, the canopy was supported by five stanchions and, at its rear, by a clapboard wall – at least the latter would halt gusts of wind from the east! Linking the two platforms was a lattice footbridge, near identical in appearance to that still in existence at Higham, but with northward and southward-facing flights of stairs in harmony with the staggered platform layout. It is likely that the footbridge came into use about a decade after the station, with a track foot crossing being in use hitherto.

Whilst goods traffic was accommodated here, the yard was seemingly swallowed up within a series of rolling stock storage tracks. On the ‘’up’’ side, a pair of southward facing sidings terminated behind the platform, immediately before the beginning of the station building, these being host to both freight and passenger stock. The number of lines was somewhat improved upon on the ‘’down’’ side: here, there were six tracks, five of which were southward facing and terminated behind the platform. The sixth faced in a direction to the contrary and required a reversal manoeuvre to gain access. Quintessential features of a goods yard flanked either side of the storage sidings complex; the southern most siding was host to a loading gauge post, whilst the northern most siding terminated at a dock platform.

On 1st January 1878, the 1½-mile long double-track Bromley (SER) branch came into use, Grove Park subsequently becoming a junction. The branch left the main line immediately south of the platforms, a connection being made with both ‘’up’’ and ‘’down’’ tracks of the trunk route. Signalling contractors Saxby & Farmer were drafted in to partially re-signal the immediate area in connection with this (the SER doing the rest), and one of the company’s signal box products appeared within the apex of the diverging lines. Such delightful cabins saw a severe cull to almost extinction from around 1959 onwards, but some good examples still exist. Indeed, Grove Park’s Saxby & Farmer cabin was built to the same fundamental design as the company’s product which now resides at Ryde St Johns Road, on the Isle of Wight (formerly of Waterloo Junction). The former did, however, have glazing present on all four elevations.

In 1899, the SE&CR was formed (initially under the temporary guise of the ‘’South Eastern & Chatham Dover Railway’’), and this company swiftly embarked on a comprehensive upgrading programme of the Tonbridge cut-off line. Remodelling work began as early as 1900 on the Elmstead Woods to Orpington section, this formally being commissioned for quadruple track working on 6th June 1904. The St Johns to Elmstead Woods stretch of route initiated four-track running on 18th June 1905, which resulted in all traces of the original Grove Park station being obliterated. The original lattice footbridge had acquired the luxury of a roof nearly one and a half decades previously. However, passengers need not have been concerned, for the revised layout yielded two covered lattice footbridges, plus much more. Six platform faces were now available for use, organised in the form of three islands. All surfaces were protected by ornate canopies, these demonstrating the standard SE&CR valance design of the era (see Maidstone West). Interestingly, the station acquired a feature already evident at Sevenoaks Tubs Hill; the southern most islands were separated by just a single track, allowing a train to be accessed from either side. The canopies also provided shelter for crème brick platform waiting accommodation, the latter reminiscent of the waiting room and office design implemented by the LC&DR at the rebuilt Bromley South and Bickley stations. Another feature employed at the rebuilt Grove Park, which had become a favourite of the LC&DR, was a high-level entrance. Peculiarly, this was constituted of red rather than crème brick, and straddled the tracks at the northern ends of the platforms, laying forty-five degrees to the running lines. The later design traits of the SER at least emerged here: the building had a clapboard extension on its side! Strictly speaking, the SER’s influence had also surfaced in the canopy valance design; this appeared to be the final standardised design of this company before the 1899 merger. A triple-track connection with the Bromley (SER) branch materialised, and five refuge sidings were still maintained to the east of the platforms, although the sole siding which was used for goods traffic was positioned to the west of the islands. Saxby & Farmer signalled the layout, and again, one of their signal box products emerged within the apex of the rebuilt Bromley (SER) branch.

Scheduled electric services commenced along the route under the Southern Railway, as the company swiftly electrified ex-SE&CR suburban lines. Third rail was extended northwards from Orpington, electric travel to Charing Cross being possible from 28th February 1926 onwards; the Bromley North branch was similarly treated. As common with all stations on the then newly electrified routes, the platforms received a change in gas lamp design to reflect a ‘’modern image’’. The company also had an influence on signalling matters at the site: the Saxby & Farmer signal box suffered fire damage in 1938, but rather than demolishing the cabin, the SR decided to repair and enlarge the structure. This provided an impressive mechanical signal box constituted of no less than sixty levers, nearly double the number of the pre-1938 arrangement. Thereafter, little changed until the advent of British Railways. Of particular significance is ‘’Phase 2’’ the Kent Coast Electrification, which saw structural additions and signalling modernisation. On 4th December 1961, the sole goods siding to the west of the platforms was taken out of use. This was followed exactly two months later, on 4th February 1962, by the decommissioning of Grove Park’s signal cabin. Hither Green ‘’power box’’ took over its functions, and colour aspect lights took the place of semaphores. The five southward facing rolling stock sidings to the east of the platforms, remained, but only for the time being. In connection with the aforementioned modifications, revisions were also made to the station itself. The most western island platform (which served the Bromley North branch) saw its eastern platform face taken out of use and blocked off with a prefabricated concrete barricade. To compensate for this, the original footbridge received an annex, this of which was solely put in place to provide the station building with a direct walkway to the single Bromley North platform face. Before this, passengers requiring the Bromley North island were required to use the second footbridge further down the platform, beyond the canopies.

1976 heralded further signalling alterations and layout rationalisation. On 6th November of this year, the London Bridge Panel was fully commissioned, which resulted in the ‘’power box’’ at Hither Green being closed. It also marked the end for Grove Park’s five storage sidings, and these were subsequently taken out of use during the modernisation. The next wave of change came in November 1988, and sadly this was for the worse. The ornate canopy valances were replaced with dreary corrugated metal – thankfully they were not truncated, and nor did the footbridge lose its roof. The Bromley North platform line also ceased to become a loop when the connection with the ‘’up’’ fast at the southern end of the island, was removed. Finally, an elongated ‘’bus shelter’’ had appeared at the southern end of the Bromley North platform during the works, bringing the station in line with Network SouthEast’s ‘’modern image’’. 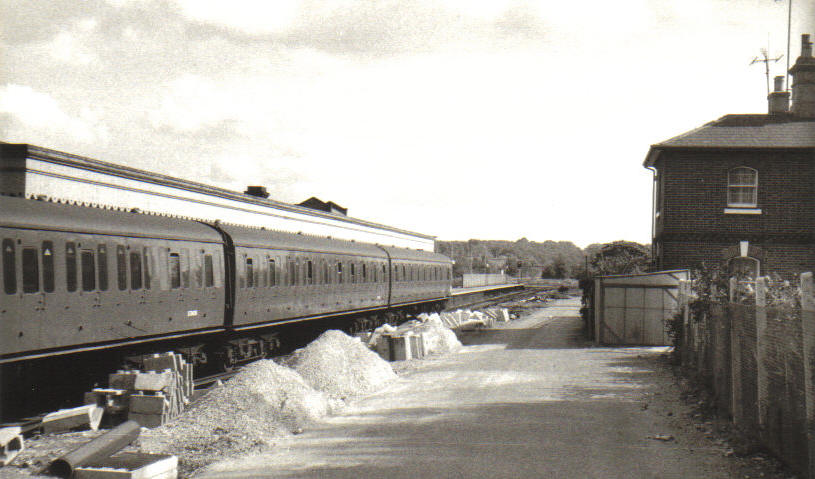 A southward view from 1970 presents a BR-designed 4 EPB unit stabled in the Bromley North shuttle platform. The unit wears the

suburban all-over blue livery. In the foreground is evidence of recent cabling works, whilst behind the unit can be seen the ornate

SE&CR-designed canopy valance which once graced the platforms. Tom Burnham 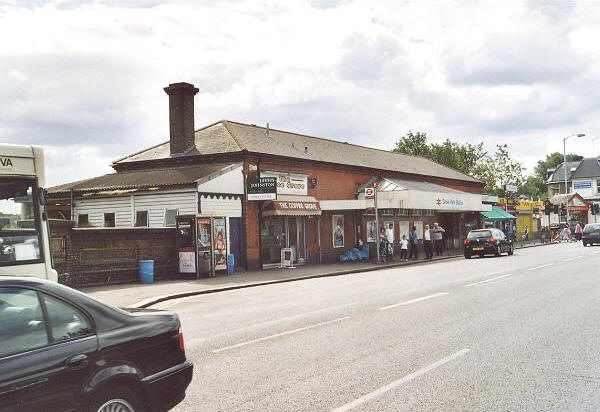 The station building, measuring nearly 110 feet in length, is seen from across the road on 2nd

August 2006. Single-storey and of red brick construction, it is interesting to note the clapboard

extension on the left. The entrance canopy here dates from 1962, having replaced a more ornate 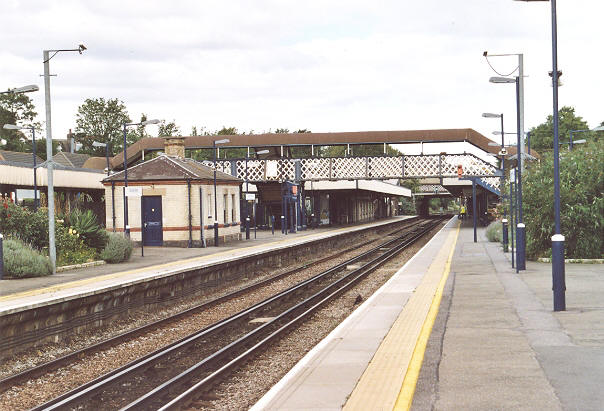 A London-bound (northward) view on 2nd August 2006, from platform level, illustrates the present

layout. The second lattice footbridge is the most prominent structure in view, and this has always

connected all three islands. Originally, the footbridge beside the station building had no connection

with the Bromley North platform. The pitched-roof crème brick building on the left has never had 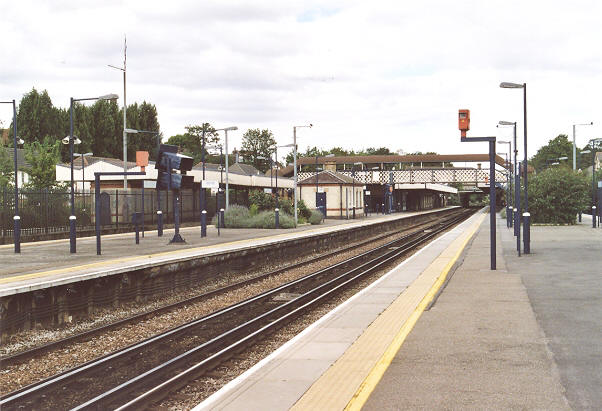 A similar view, this time from further back, better reveals the Bromley North platform on the

authentic). Note that palisade fencing has taken the place of prefabricated concrete as the

barricade on the now unused platform face. Bushes and shrubs have for many years been

features of the platforms. David Glasspool