This is a peculiar structure, located on Section 1 of the CTRL (now High Speed 1) 19-KM (11.8-miles) north west of Ashford, immediately adjacent to the M20. It resides on that part of the line which formed Contract 420, from Boxley (about 4.8-KM/3-miles northeast of central Maidstone) to Lenham Heath, which was worth £140,000,000 and awarded jointly to ''Hochtief'' and ''Norwest Holst'' in March 1999. Defined strictly as a "cut-and-cover" tunnel, this is a rectangular concrete structure which extends over the double-track line for 150-metres (164-yards).

Those tunnels at Hollingbourne and Sandway were built to a curved profile, using precast concrete segments, these subsequently being covered over with layers of earth. Boxley and Harrietsham tunnels were, however, of a different ilk, being constructed with a rectangular cross-section. Whilst that at Boxley was covered over with soil and a grass layer, Harrietsham Tunnel was left completely without any form of disguise, presumably because of its very close proximity to the M20. Its raison d'être appears to be the need to shore up the embankment running along its northern side, in addition to acting as a noise barrier. The tunnels saw regular services from 28th September 2003, when the CTRL's "Section 1" was brought into use for scheduled passenger trains. 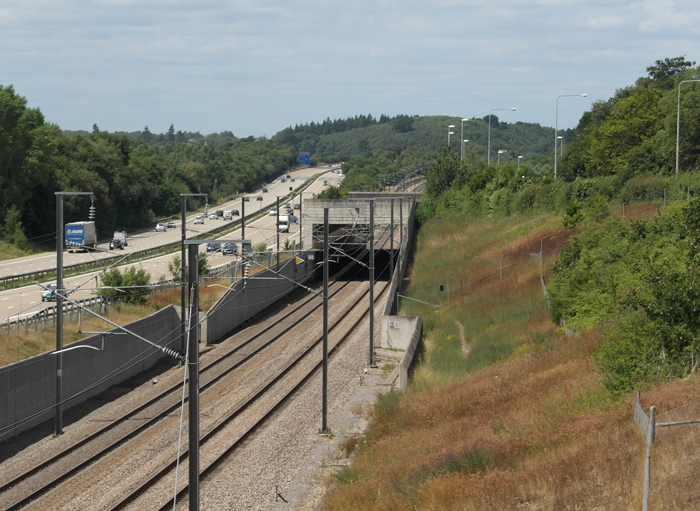 A north westerly view shows that the tunnel is tightly sandwiched in-between the embankment (above which is the A20) and the M20. The next tunnel in the London direction is that of Hollingbourne, 3¼-KM (2 miles) distant. © David Glasspool 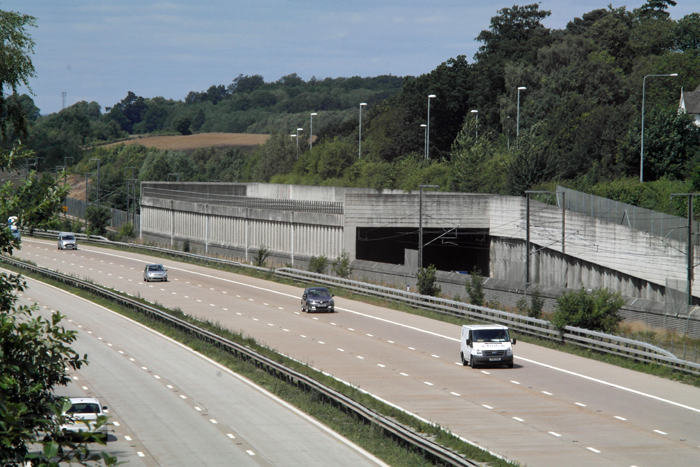 The tunnel is a distinctive feature along the M20, and this view gives the impression that perhaps an embankment leading up to the A20 would have been sufficient. © David Glasspool