Located within a leafy Bromley suburb, the terminus at Hayes retains a bygone charm. Like Bromley North, just 2¼-miles away as the crow flies, the station still oozes a Southern Railway character, having avoided complete rebuilding after sustaining bomb damage during World War II. A curved shopping arcade forms the route to a fully-enclosed concourse, beyond which a lengthy platform surface exists, still covered in part by a traditional Southern Railway (SR) canopy. A plethora of trees along the line, showing their full glory in the summer months, makes the terminus at Hayes, which is 14¼-route-miles from Charing Cross, seem more like being at the end of a countryside branch than a suburban commuter line.

The history of the railways in the area is complex, particularly given that two companies with near identical names were formed by Acts of Parliament within a year of each other to build adjacent lines. Railway openings took place as follows:

The Mid-Kent Railway was leased by the South Eastern Railway (SER) from the outset and formally taken over by the latter on 16th July 1866. The SER also leased the Bromley to Southborough Road section of the Mid-Kent (Direct) Railway as a continuation of the line from Lewisham; this lease subsequently transferred to the London Chatham & Dover Railway by an Act of 7th August 1862.

Another nominally independent concern by the name of the “West Wickham & Hayes Railway” was incorporated by an Act of Parliament dated 9th July 1880, with an authorised capital of £85,000 (£9,126,000 at 2018 prices), to build a 3¼-mile-long railway from Elmers End, on the SER’s Mid-Kent Line, to Hayes, Kent. Between Elmers End and Hayes, intermediate stations were to be commissioned at Eden Park and West Wickham. Double-track throughout, the line was opened to public traffic on 29th May 1882. The “West Wickham & Hayes Railway” had been absorbed by the SER in the previous year.

Hayes started life as a typical countryside terminus; unpretentious in construction and surrounded by flowing fields. A single platform surface comprising two faces (a “terminating island”, if you will) was in evidence from the outset, upon which was a single-storey main building of tongue-and-groove timber construction. The main building was akin to that which today survives at Eden Park, and its positioning ensured that the southern of the two platform faces was of a shorter length. The track layout reflected that of a rural station at the end of the line: a turntable and run-a-round loop were provided for terminating steam locomotives, in addition to a trio of lengthy sidings south of the platforms. A signal box was located on the throat of the station, on the northern side of the running lines. In the earliest years, a shuttle service to and from Elmers End sufficed, where connections were made for the SER’s London termini. 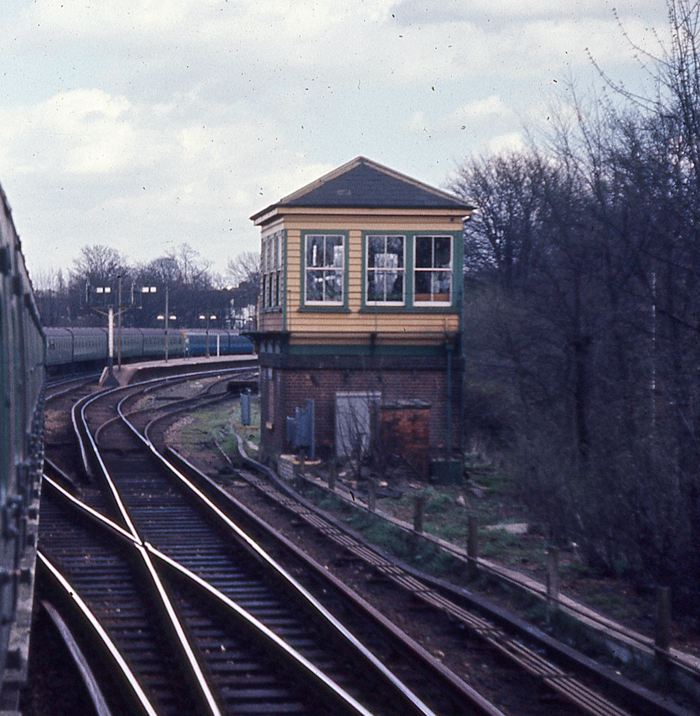 The first signal box was on the opposite side of the approaches to that seen here. The signal box pictured was built to the SER's in-house design, with clapboard sides, sash-style windows, and a slated hipped roof. Diverging to the right is the track which leads to the goods sidings; the stacked sleepers upon the rails suggest these were in the process of being lifted. The "up" starter semaphores are evident at the end of the platform, beyond which are concrete bracket lampposts with hexagonal lampshades. The EMU stock on the left is stabled in an electrified siding which, like its run-a-round loop predecessor, ran parallel with the track of platform 2. © David Glasspool Collection 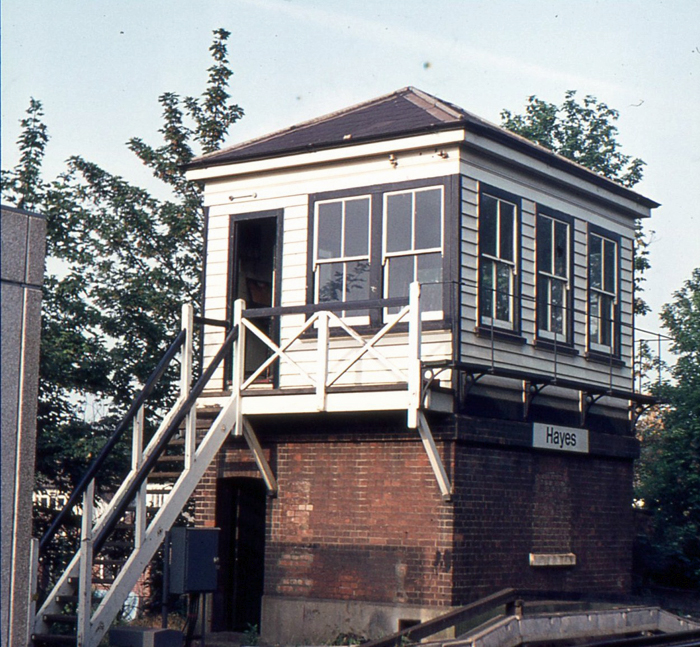 The signal box is seen once again, at about the time of closure, having received a repaint into a white colour scheme in the interim. The balcony along the front provided access for window cleaning. © Roger Goodrum