The triangular area of land sandwiched in-between the Dartford Loop Line, the Charing Cross to Orpington line and the Lee spur was not developed for railway use until ten years after the Grouping. On 10th September 1933 the Southern Railway opened a modest, but well laid out engine shed complex at Hither Green on the aforementioned site. Featured was a mostly concrete-fabricated dead-end shed, comprising six roads, an elevated coal stage line and a turntable, the latter located to the north of the site. All lines ultimately fed off a single set of points positioned on the ''down'' slow of the Charing Cross to Orpington route. The shed's role was similar to that of Bricklayers Arms, as it was used principally as a freight depot. The locomotive allocation reflected this function and the array of sidings provided on site were used for the re-marshalling of whole freights, rather than the stabling of motive power. Its close proximity to Bricklayers Arms, coupled with its primary function for freight servicing, ensured that locomotive swapping between the two was a common occurrence, although both remained sub to the principle shed on the South Eastern Division Stewarts Lane.

From the outset, Hither Green accumulated a large number of ex-SECR 0-6-0 tender engine types, particularly the ''C'' Class, but these engines were still adequate enough to deal with the levels of freight traffic on what was mainly a passenger-carrying railway. However, by the mid-1930s the shed had received a batch of 2-6-4 ''W'' Class tank engines, specifically designed for those heavy cross-London freights which traversed inner-city inclines of flying junctions and were squeezed in-between faster electric services. World War II highlighted the need for the SR to develop more powerful freight motive power to cope with the sudden rise of this traffic to and from the English Channel ports, the resultant of which was the innovative and powerful, but peculiar, Bulleid ''Q1'' Class. A small number of these received Hither Green allocation in their early years and like their ex-SECR counterparts, retained the 0-6-0 wheel arrangement. On Nationalisation, this was by far the most common wheel arrangement among the locomotive allocation at the depot, such engines numbering 28 out of a total fleet number of 55. The range of motive power at the shed remained steady after 1948, that is until dieselisation began materialising in a big way in the late 1950s. Before the end of the fifties, the depot had accumulated no less than thirteen D3000 shunters (TOPS Class 08), but this influx was insignificant compared to what was yet to come. Between 1959 and 1962, ninety-eight Type 3 (Class 33) diesels were produced by the Birmingham Railway Carriage & Wagon Company, their allocation being exclusively Hither Green from the outset, although transfers to Eastleigh on the South Western Division began as early as 1965. Steam on freights in the area disappeared rapidly, with re-allocation of a small number of engines from Hither Green to other depots on the Southern, in addition to the mass withdrawal of elderly ex-SECR types, the latter of which had served the depot well. Steam vanished, as did the coaling stage, but the turntable remained and this is still in existence today, retaining its connection with the yard's sidings.

Throughout the late 1960s, 1970s and 1980s, the Class 33s remained the depot's staple diet, hauling the bulk of freights on the North Kent Line and the routes deep into Kent, but this by no means limited the scope for other classes at the shed. Stewarts Lane-allocated Class 73 Electro-diesels were frequent visitors (a number of these becoming part of the Hither Green fleet on paper), and Class 47s and 56s were common sights in the shed roads, the latter even more so during the Chatham Dockyard excavation programme between 1989 and 1993. Indeed, even Class 25 and 31 diesels could be seen when hauling cross-London freights. Gradual phasing out of the Class 33s from the depot began in 1990, with the arrival of the Class 60: the former were under-powered for many of the heavier freights (particularly their main aggregate workings), which required them to double-head. It became clear that loads which required two Class 33s could be handled with ease by just a single Class 60, although the latter would certainly not be a complete replacement for all of the South Eastern Division-based 1960s locomotives, if it was to be one at all! - More of later.

In 1982 the depot had become part of ''Railfreight'', this being the collective business name of the whole of British Rail's freight operations after sectorisation. This then changed in 1987 when further divisions of the freight sector were made, thus producing the ''TrainLoad'' sectors. ''TrainLoad Construction'' was the main user of Hither Green, naturally due to the North Kent aggregate flows to and from the Hoo Peninsula and Angerstein Wharf, but all TrainLoad sectors had a presence here, even if it was not ''official''. At the time there was still significant traffic from the Oil refineries on Grain, which was handled by Hither Green-based TrainLoad Petroleum locomotives, plus regular scrap steel flows from Sheerness, handled by TrainLoad Metals. Finally, with the opening of Thamesport in 1990, a number of Railfreight Distribution Class 47s arrived at the depot, these handling the container traffic from the port. Naturally, these sector demarcations were not religiously adhered to and, with frequent locomotive switching between sector pools, the logo carried by the motive power more often than not differed from the load type.

The depot came under the control of English Welsh & Scottish Railway (EWS) in February 1996, and the former British Rail Civil Mechanical & Electrical Engineering department (CM&EE), which had been based here since 1991, became part of Balfour Beatty. By this time, half of the original engine shed had been demolished (this occurring in 1993) and the remaining portion modernised, but a new structure for housing Balfour Beattie's maintenance stock did appear on the site in December 1997. The Class 33s continued to operate out of the depot until their total withdrawal in 1998, the final members being dragged ''dead'' from Hoo Junction on 28th December of that year. The mass influx of General Motors-built Class 66s had begun in the same year, which saw an interesting turn of fate result in Class 31s (traditionally Eastern Region) being displaced from Toton and transferring to Hither Green. Their raison d'etre on the division was to work Hither Green to Hoo Junction engineers' trains, and indeed a number were stabled for long periods of time at the latter. These themselves were then finally withdrawn from the North Kent Line in 2001, but the fleet constitution at the depot remained remarkably vintage, with Class 37s receiving an allocation. The range of traction was increased further by the sudden transfer south of Northern and Midlands-based Class 58s which, like the Class 33s back in the mid sixties, were now split between Eastleigh and Hither Green. This transfer was officially announced in 2001, but the class had featured on the South Eastern Division at least two years before this, hauling regular scheduled freights. The type was, however, short lived in the area and the last of these locomotives withdrawn nationally was on 2nd September 2002. The Hither Green-allocated Class 37s - Nos. 37047 and 37109 - were withdrawn from service and put into store in April 2005, again at this depot; they now stand alongside withdrawn diesel shunters. 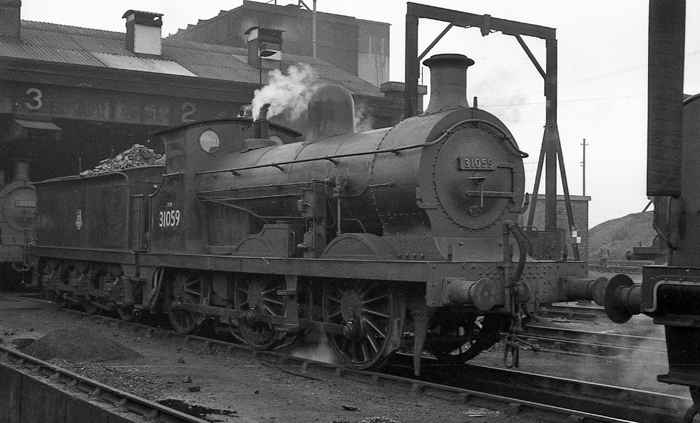 Ex-SE&CR "C" Class 0-6-0 No. 31059 is seen on shed road No. 3 at Hither Green, just three months before withdrawal. Classmate No. 31253 is just behind, emerging from the shadows. © David Glasspool Collection 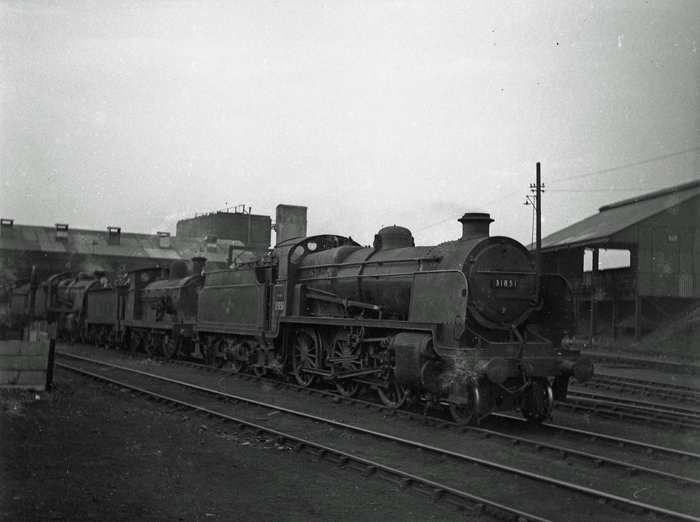 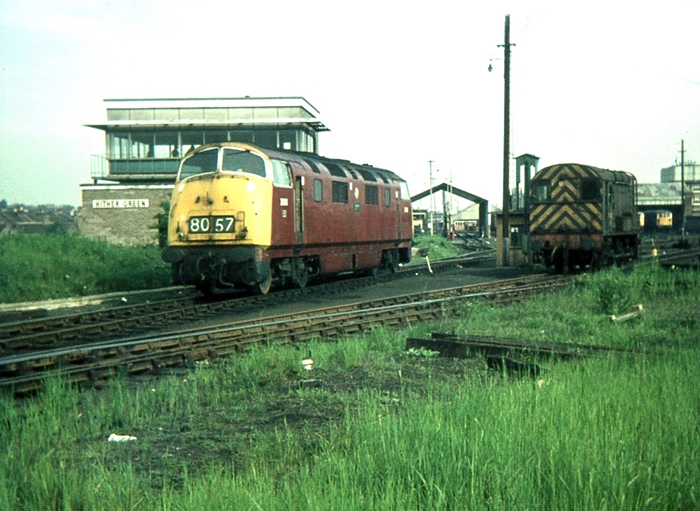 This splendid view depicting the throat of Hither Green Depot shows a D800 ''Warship'' Class visiting from the Western Region. The locomotive has been identified by Martin Street as No. D838 ''RAPID''. The head code displayed, 8057, indicated that the diesel had operated the 22:20 Severn Tunnel Junction to Hither Green freight, via Salisbury and Basingstoke. In the above view, the diesel had just refuelled and was about to depart to the marshalling yard to haul the return working, the 7V70 08:15 Hither Green to Severn Tunnel Junction. Note behind the locomotive the operational signal box and, to the right, a diesel shunter, the latter still in BR Green livery. In the background, we can just see an Electro-Diesel emerging from the former engine shed. © Roger Goodrum 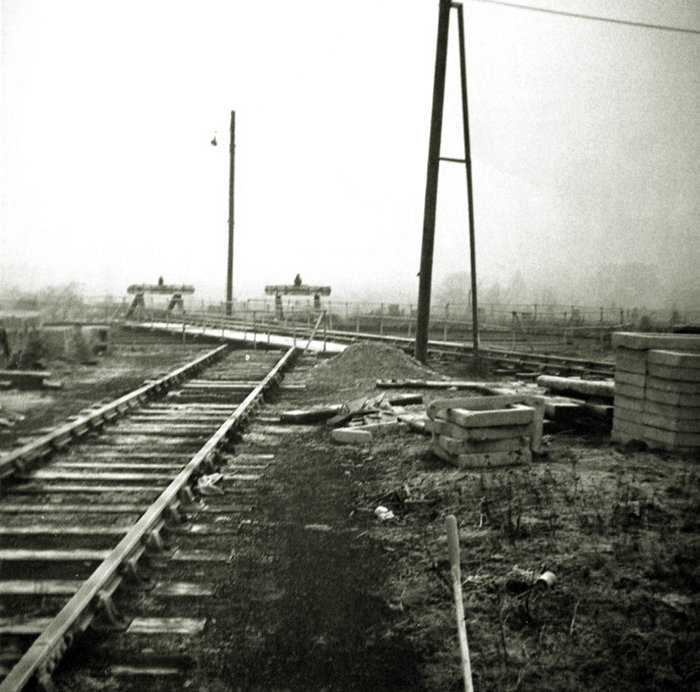 This view shows the still serviceable turntable, located at the northern end of the depot site. The photographer recalls using this to turn 350 HP shunters. © Roger Goodrum 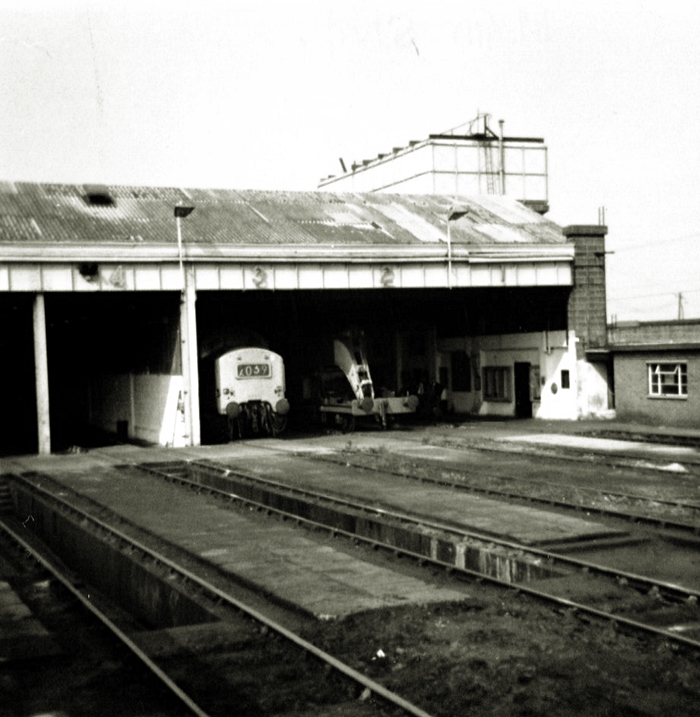 A Class 37, bearing original headcode box, is seen stabled on road No. 3 of the former engine shed. Alongside, on road No. 2, is a breakdown crane. © Roger Goodrum