In 1831 an independent concern known as the ''London & Greenwich Railway'' (L&GR) was promoted for the construction of a railway line linking the capital with Greenwich, via Deptford. The concern’s ultimate goal was to reach Dover in a bid to serve continental traffic. Under the leadership of Colonel George Landmann and George Walter, the line was required to traverse an area dense with market gardens and houses, but the scheme outlined to overcome such difficulties was impressive. The two individuals planned to construct the line upon a series of viaducts for the whole of its length between London and Greenwich, these of which would consist of 878 arches in total, and be 3¾ miles in length. Although such intentions may have seemed audacious at the time, the viaduct did have many advantages: it eliminated the need for level crossings to be provided where the railway intercepted the many streets; rails were kept well out of the way of people and stray animals; finally, the lines would be immune to flooding, being at a height above sea level. The project received Parliamentary approval in 1833 and construction of the line ensued shortly afterwards.

Hugh McIntosh was contracted to erect the 878-arch viaduct, and would eventually make use of sixty million bricks in its construction. Building began at both ends of the proposed line, with the Spa Road (the initial terminus of the L&GR, just east of London Bridge at Bermondsey) to Deptford section being completed in February 1836, this opening to traffic on the 8th of that month. The train frequency at the time was one an hour in either direction, and this was latterly increased on the acquisition of further locomotives, permitting two trains an hour in both directions. Just over ten months later, the lines from Spa Road were extended westwards to London Bridge, this section being opened on 14th December 1836 by the Lord Mayor of London, with crowds of people gathering at the new station to watch the proceedings. The capital now had its first terminus station, albeit at the end of what would soon be a relatively short 3¾ mile long line! The terminus consisted of two platform faces separated by three tracks, with a shopping arcade underneath, and was completely exposed to the elements – only the railway company’s staff had protection in the three-storey high office block on the railway’s southern elevation! Being open to the weather was only partially compensated by the belated installation of a second-hand boat sail to provide some protection, but this only added to the site’s sheer austerity. At the rear of the platforms was an approach road, separated from the platforms by three sets of double gates.

The most troublesome part of the route to construct was the final ¾ of a mile from Deptford to Greenwich: Deptford Creek was posing as a serious obstacle and an unprecedented design of bridge was necessary to carry the tracks over it. The whole route could claim to be the ''London & Greenwich Railway'' proper when the final section was opened on 24th December 1838. In the following few years, the London Bridge station site would see rapid expansion and increased importance as a hub for railway traffic. Interestingly, it appears that the word ‘’station’’ first came to prominence on this railway. The term is thought to derive from the buildings which policemen were accommodated in (these being called ‘’stations’’) when controlling the railway. Indeed, policemen were used in the earliest years as signalmen, using basic lamps and flags to coordinate trains.

Meanwhile, on 12th June 1835, another separate concern known as the ''London & Croydon Railway'' (L&CR) had been established by an Act of Parliament for the construction of a line between its two namesake locations. Building of the nine-mile route initiated shortly afterwards, the plan outlining a connection with the existing L&GR at Corbetts Lane Junction (just east of Spa Road station), and for the erection of a separate station on the north side of the London & Greenwich's. By this time, the L&GR had widened the viaduct at the London Bridge end to accommodate eight tracks. The L&CR’s line terminated at what is now West Croydon and cost a total of £615,160 to construct (£47,371,000 by today’s prices), formally being opened to traffic on 1st June 1839. Two extra tracks were laid on the approach to London Bridge to accommodate the L&CR trains and for a very brief period, that company used the L&GR's London Bridge station until its own terminus north of the latter was completed later, on 5th June. This was a decided step up from the L&GR's accommodation, the station being a much more permanent-looking affair. Passengers were treated to a 170-foot long trainshed, covering all platforms and associated lines for the combined width of 48 foot. Bricks lined one side of the structure, columns the other, but the comparative ‘’grand’’ nature of this station was probably due to the fact that the fledgling South Eastern and London & Brighton Railways were also to use it. Goods were also accounted for here, a 52-foot wide area of sidings being in evidence immediately north of the L&CR’s station. To reach its terminus, the L&CR had to cross over the path of L&GR tracks, and for the privilege of using the latter’s lines from Corbetts Lane Junction to London Bridge, the L&CR paid 3d (£0.80 by today’s prices) per passenger. This was an issue which would later escalate into a major dispute.

The London & Brighton Railway reached London Bridge by means of extending its lines from Brighton, to a position just south of today's Norwood Junction station. Thereafter, it was to share metals with the SER (created by an Act on 21st June 1836), the latter of which had begun building its trunk line to Dover in 1837. An Act of Parliament had formed the L&BR on 15th July 1837. On 12th July 1841, the L&BR had begun running into the L&CR’s 1839 London Bridge terminus, and from 10th May of the following year, capacity was increased upon the viaduct by the commissioning of a further two tracks. The L&BR was soon joined by the SER, which initiated services between London Bridge and Tonbridge on 26th May 1842. Ownership of tracks between Redhill and Norwood stood at SER 55% and L&BR 45%, whilst that northwards beyond Norwood was wholly London & Croydon owned. For nearly two years, three separate operating companies ran out of the same terminus (note that the fourth company, the L&GR, retained its own station). The SER began running to Dover from 7th February 1844, and also in this month, the L&GR completed a new terminus station for use by the three railway companies. Consequently, the L&GR transferred over to the L&CR’s station of 1839, eliminating the need for the two companies’ trains to cross each others’ paths. The newly-built joint station was certainly a complex to behold, its elaboration infinitely better than the first L&GR terminus. The main building backed onto the rear of the viaduct and was an attractive, albeit imposing, affair. Two storeys high, it was 250 feet in length and boasted a four-storey high clock tower on its southern elevation. Its architecture was virtually identical to the style which can still be seen in existence at Queen Victoria’s former residence ‘’Osborne House’’, on the Isle of Wight – right down to the clock towers. This comparison is perhaps not as tenuous as it may seem: William Cubitt was involved in the design and construction of the ‘’joint’’ London Bridge station (cooperating with Henry Roberts), whilst his brother, Thomas Cubitt, designed Osborne House. Indeed, the terminus was completed in 1844: the first section of Osborne House came into use during 1845, the complex seeing full completion in 1851. Behind the façade were three platforms, one for the main line arrivals, another for main line departures, and a third for the SER’s proposed North Kent Line, all of which were protected from the elements by a trainshed. The terminus was accompanied by an adjacent carriage storage shed comprising four parallel tracks, these being accessed by the once customary traverser. 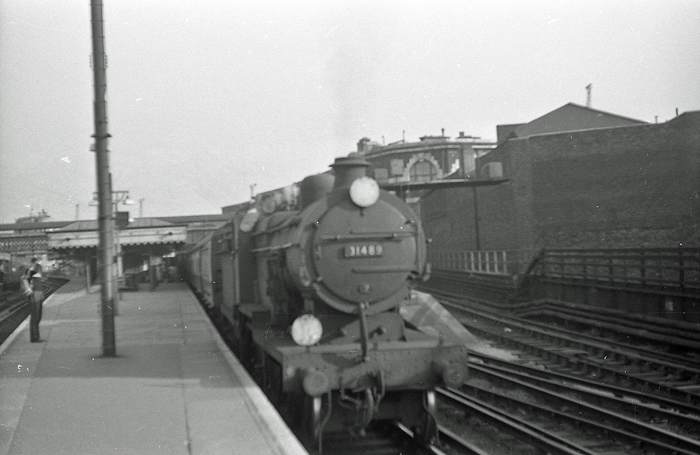 The ex-SER railway offices are just visible to the top right of D1 Class No. 31489, which is seen fronting Blood and Custard BR Mk 1 stock on a Kent Coast via Chislehurst and Tonbridge service. One of two lengthy lattice footbridges can be seen in the background. © David Glasspool Collection 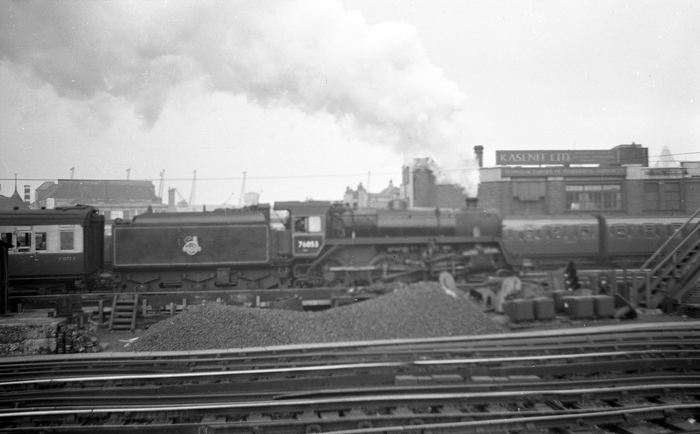 Redhill-allocated BR Standard 2-6-0 No. 76053 is seen departing the "Low Level" platforms with the 5.25 PM service to Reading, which was timed to reach its destination at 7.59 PM. Carriages were detached from this train at Redhill, these being taken on to Tonbridge. Thames side cranes can be seen along the skyline, a common sight at that time. © David Glasspool Collection 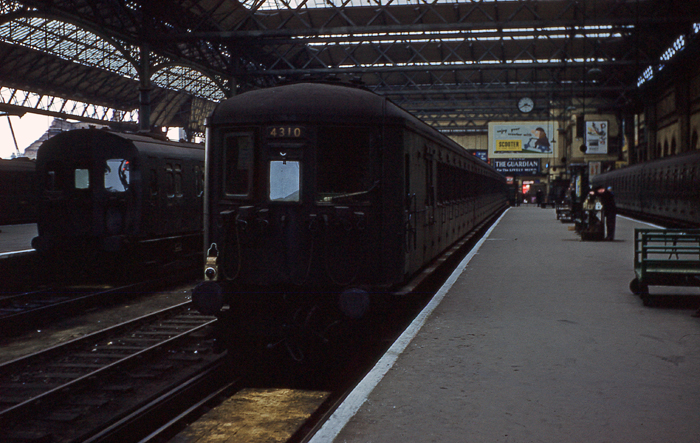 "Nutcracker" No. 4310, formerly a three-vehicle unit, but strengthened with an additional coach by the time of this photograph, is seen under the ex-LB&SCR trainshed of the low-level platforms. The gaping hole in the background, behind the 4-SUB on the left, is where the Terminus Hotel once stood. This was destroyed by German bombs in December 1940; it had been used as offices since 1893. © David Glasspool Collection