This is a terminus with an interesting, but decidedly complex history. The companies which have in the past been associated with Victoria are numerous, and the fact that the site has always effectively been ‘’two stations in one’’ has led to a wide range of services and stark architectural contrasts standing side by side. The West End’s first terminus station, Victoria was for long ‘’The Gateway to the Continent’’, and its varied history is told throughout these pages.

The Situation so Far

London Bridge had opened to traffic on 14th December 1836, under the auspices of the ‘’London & Greenwich Railway’’ (L&GR), and resided at the end of a three-mile line from Deptford. Services were extended a further ¾-mile to Greenwich on 24th December 1838, and the route was operated by just the one company. A second concern in the form of the ‘’London & Croydon Railway’’ arrived on the scene on 12th June 1835, promoting a nine-mile line between its namesakes. The company commenced operation into London Bridge on 1st June 1839, where a separate station, alongside that of the L&GR’s, was eventually provided. Next in line was the ''South Eastern Railway'', which was formed by an Act of 21st June 1836, promoting a direct line between London and Dover. It was proposed that this would become a natural extension of the existing L&GR. Finally, on 15th July 1837, the ‘’London & Brighton Railway’’ was formed, with the intention of building a direct line between the capital and the Sussex Coast. The stage was set, and line openings were as follows:

At Norwood, the L&BR created a junction with the existing metals of the L&CR, which assumed a westerly heading to terminate at what is known today as ‘’West Croydon’’. Also worthy of note is that the LD&DR network began as far south as Redhill, rather than in the capital; this was because Parliament decreed that only one line should enter London from the south. Thus, the company had to share the metals of the L&BR and L&CR on the London approaches. Initially, the LD&DR was unperturbed, since the company was spared the expense of constructing a completely new entry into London, but severe problems later arose as traffic levels increased.

Advances to London had also been made from the west, in the form of the ''London & Southampton Railway'' (L&SR). The concern had been formed by an Act of Parliament, dated 25th July 1834, to build a 77-mile line between the London suburb of Nine Elms and Southampton. Opening of the route was undertaken piecemeal:

The L&SR became the ''London & South Western Railway'' (LSWR) on 4th June 1839. Nine years later, on 11th July 1848, an eastward extension to a site adjacent to Waterloo Bridge was opened to passenger traffic. The extension comprised four lines, carried upon a viaduct snaking through the suburbs, and the provision of quadruple track had been justified by a proposal to lease lines out to other railway companies. In particular, the L&BR had shown considerable interest, and talks between the company and the LSWR had led to the submission of a Bill to Parliament for the construction of a line between Croydon and Wandsworth. This route would give the L&BR the necessary access to the proposed terminal area at Waterloo Bridge, and Royal Assent for the scheme was given in 1846.

In August 1846, the L&BR and L&CR amalgamated to become the ‘’London Brighton & South Coast Railway’’ (LB&SCR), and relations with the LSWR subsequently declined, resulting in the abandonment of the Croydon and Wandsworth scheme. The LB&SCR was, however, still desperate to reach the West End, not content with its current terminus at London Bridge, on the south side of the Thames and far from the heart of the capital. It was therefore with great pleasure the LB&SCR took by witnessing the formation of the ‘’West End of London & Crystal Palace Railway’’ (WEL&CPR), by an Act of Parliament in 1853. The WEL&CPR had been authorised to construct a line in connection with Crystal Palace Park, Sydenham. The company’s route was to pass through Clapham, Streatham, and Norwood, and at the latter would make a connection with the LB&SCR main line. A branch line was also destined to spur off the main WEL&CPR route, and be tunnelled under the grounds of the Crystal Palace to meet an 1846-authorised appendix of the LB&SCR from Sydenham. At the Thames end of the WEL&CPR, a connection was to be made with the LSWR in the vicinity of Battersea, and the LB&SCR was once again given the opportunity to reach Waterloo, bringing its services closer to the West End (albeit on the opposite side of the river). From the LSWR Waterloo approaches, the WEL&CPR was also to construct a branch to an independent terminus in Battersea, on the southern bank of the Thames.

The WEL&CPR issued notices to a number of landowners on 10th May 1855, stating that sections of their lands were to be taken to build the proposed railway, in accordance with a Special Act obtained in 1853. Building work commenced on 4th July 1855, but construction soon ground to a halt. Landowners, having been totally unaware of the railway proposal until the serving of notices in the May, acted swiftly, and on 13th July 1855, a Bill was submitted to Parliament. This sought to acquire an interim order, restraining the WEL&CPR from proceeding further with building work on the lands in question. The order came into force the following day, and prohibited the company from digging, excavating, raising any bank, depositing earth, or causing more destruction on the lands. The WEL&CPR was forced to place the names of the plaintiffs within the ‘’Book of Reference’’, which identified them as the legal owners of the land.

Previously, during the 1854 Parliament Session, the company had submitted a Bill for further extension of its proposed network, to Bromley and Farnborough (Kent). The WEL&CPR opened in the following stages:

Between Wandsworth Common and the Pimlico Terminus, the route ran parallel with the LSWR Waterloo approaches, before diving under the arches to reach the water’s edge at Battersea. The LB&SCR operated the line from the outset, and the ‘’Pimlico’’ station was served by direct trains to Brighton and London Bridge. Between Battersea and the West End, passengers were conveyed by horse and carriage over Chelsea Suspension Bridge, which had been commissioned on 28th March 1858. Twenty-two acres of land had been acquired for the wooden-built terminus in Battersea.

Across the Thames: The Victoria Station & Pimlico Railway

The ‘’Westminster Terminus Railway’’ was formed by an Act of Parliament in 1854, promoting the extension of the proposed WEL&CPR tracks across the Thames and into the West End. A viaduct over the river was to be erected from the north side at Ranelagh Road, which was located deep within Pimlico, and be brought into Battersea New Town, about ¼-mile east of what was to become the site of the WEL&CPR’s temporary ‘’Pimlico’’ terminus. The Admiralty gave the green light for the viaduct on 29th February 1856, commenting that the design would not interfere with navigation of the Thames. The wheels began to fall off the ‘’Westminster Terminus Railway’’ scheme when, in 1856, another Act of Parliament was passed, authorising the abandonment of the company’s proposed lines which had already received Royal Assent. In addition, the available capital authorised for the railway was also reduced. However, all was not lost in the endeavour to bring the railway north of the Thames, and in 1858 a new concern emerged: the ‘’Victoria Station & Pimlico Railway’’ (VS&PR).

The VS&PR Bill did not pass through Parliament with ease. There was fierce opposition from residents of Belgravia, who did not want the steam locomotive invading the tranquillity of the exclusive area. The Bill was read by the House of Lords on 5th July 1858, and eventually passed in that year, local landowners being compensated. The VS&PR intended to build a permanent terminus station in the heart of Belgravia and Pimlico, which could serve no less than four separate railway companies, and started out with a capital of £675,000. At this time, there was no terminus within the scope of the West End – the closest was the LSWR’s site at Waterloo, but even this was south of the river. Potential candidates were the SER (still working only as far as London Bridge), the LB&SCR (the independent concern’s main backer), the LSWR, and the fledgling East Kent Railway (more of later). On the north side of the Thames, the track bed would partly re-use the course of the existing Grosvenor Canal, which had originally opened in 1823. The canal basin, which resided ⅔-mile north of the Thames, was earmarked as the site for the terminus, and the area acquired for the station totalled 14 acres. In 1859, Parliament authorised the VS&PR to raise further capital; it was also in this year that construction of the terminus extension began.

All LB&SCR luggage labels which either emanated from the Isle of Wight, or were bound for the island, had

a distinctive red cross through the middle. Raymond Fuell 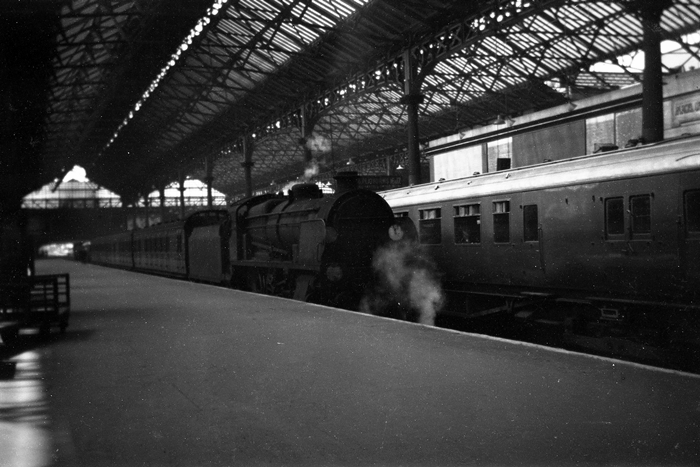 SE&CR ''Birdcage'' stock. A class of just six, these engines were once familiar sights on the ''Chatham'' main

line, prior to electrification in June 1959. Thereafter, they could be found running from the ''Brighton'' side

of Victoria, to Redhill and Tonbridge. Alongside is a 4 COR unit, whilst in the background is Ecclestone 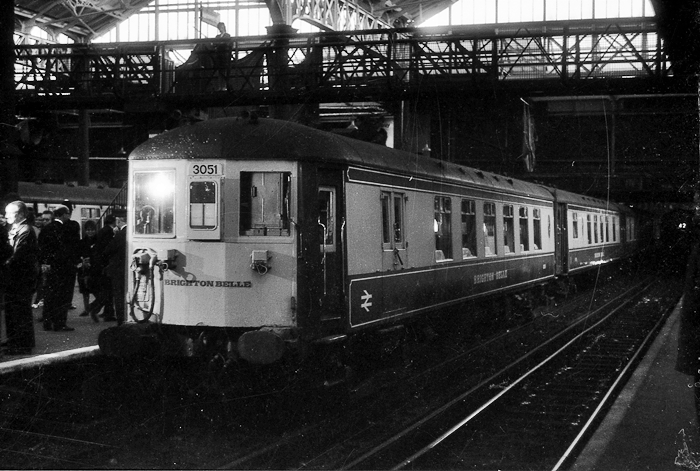 thought to be 9th May 1972. On this date, the unit carried out its last passengers duties in connection with the