Despite general rationalisation over the years, this remains a station of much interest, comprising an unusual track layout and 19th Century buildings. Maidstone, Kent’s County Town, has been fortunate to retain a pair of stations, each on alternate routes, which have stood the test of time well, avoiding the drastic rebuilds and modernisations suffered by numerous sites on the South Eastern Division. The first company to reach Maidstone was the South Eastern Railway, on 25th September 1844, by means of a northward branch from Paddock Wood. This line subsequently became a loop when the range of services was augmented by the opening of a 10¾-mile-long extension to Strood on 18th June 1856. The second route to Maidstone latterly became the more important of the two, and its origins lie with an independent concern known as the ''Sevenoaks Railway''. This company had been formed by an Act of Parliament in 1859 for the construction of a nine mile line between its namesake and the LC&DR’s Dover trunk route. The branch came into use between ‘’Sevenoaks Junction’’ (later to become ''Swanley Junction'') and Sevenoaks Bat & Ball, on the market town’s northern outskirts, on 2nd June 1862, being worked by the LC&DR from the outset.

After completion of the Bat & Ball route, the Sevenoaks Company set its sights for Maidstone. Indeed, in 1862, Parliamentary approval had been received for an eastward extension of the Sevenoaks line, and as part of this process, the company renamed itself the ‘’Sevenoaks Maidstone & Tunbridge Railway’’. The plan was to create a northward-facing junction with the Maidstone extension, one mile north of Bat & Ball. The Maidstone line opened on 1st June 1874, and like the earlier Sevenoaks branch, it was single-track from the outset. However, doubling of the route was not too far around the corner, and this was authorised on 11th August 1875, full two-track working to Maidstone commencing on 1st July 1882. The LC&DR’s timetable operation here can be likened to that of the SER’s: the latter decided to reverse all Charing Cross services at Cannon Street from September 1866 onwards. Similarly, the LC&DR reversed all Maidstone services at Bat & Ball; here, a locomotive turntable had been provided, allowing engines to run around their train for the return journey. The LC&DR absorbed the original Sevenoaks Company in 1879, and since 1st August 1869, through working was possible from the Bat & Ball route to the SER’s 1868-opened Tonbridge cut-off line.

For ten years Maidstone was end of the line, and like Bat & Ball, it was provided with a single-track engine shed and a 54-foot 8-inch locomotive turntable. The former was brick-built with a pitched-roof, measuring about 55-foot in length, and could only be accessed via the turntable. These facilities were located at the southern extremity of the station site, and they were joined to their immediate north by a pair of platform faces. With reference to the platforms, these were westward-facing, comprising a 355-foot bay and 615-foot side platform face, and were arranged as a single terminating island surface. Serving the platforms were a pair of timber-fabricated buildings: one of these was single-storey with a pitched roof, and measured 132 feet in length. Adjoined to this building’s southern elevation was the second wooden building; this again had a slated pitched roof, but was two storeys high and about a third of the length of its counterpart. Unlike the SER’s clapboard structures, which featured overlapping wooden planks, the Maidstone buildings were of tongue-and-groove construction. The whole layout was located immediately to the east of the meandering Medway, and was reached by means of a double-track wrought-iron bridge. This was of lattice girder construction, with semi-circular sides, and stretched for 113-foot over the below river.

1884 was a significant year, for it marked the opening of an 18¾-mile eastward extension from Maidstone to Ashford. Promoted and built by another independent concern, the ‘’Maidstone & Ashford Railway’’, the route opened to regular traffic on 1st July, being worked by the LC&DR from the outset. In connection with this, the station layout at Maidstone was extensively revised and enlarged. A 75-foot long single-storey structure, with a slated pitched roof, was erected on a third platform (455-foot long), to the north of the existing surfaces. The structure was constituted of the familiar crème brickwork of the LC&DR, which had also been used in the construction of Bearsted, Hollingbourne, and Harrietsham stations along the Ashford extension. The building demonstrated an intricate 155-foot-long canopy which matched the design of those installed at the aforementioned intermediate sites. It is worth noting that the existing wooden building on the southern (‘’up’’) platform surface was equipped with an alternate-styled canopy; an example of this design can be found within the Gravesend West section. This canopy formerly wrapped around the western end of the ‘’up’’ building, to provide cover for the still extant bay platform. Although double-track entered the site from the west and similarly departed to the east, the through platform surfaces were in fact separated by three lines. Inserted in-between the two running lines was a rolling stock siding; this was a through-affair, and measured 200 yards in length. The fact that the SER’s station demonstrated this same unusual track formation would appear to be purely coincidental.

It appears that at Maidstone, the LC&DR began its trend of erecting ‘’high-level’’ station buildings straddling the running lines. At the eastern extremity of the site, a new ticket office was built across the tracks, this measuring about 68-feet in length. This structure was built with the now familiar LC&DR crème brick, and it demonstrated orange-brick window frame arches which were identical in design to those used on the intermediate stations between the County Town and Ashford. Such high-level entrances appeared at Chatham, Bickley, and Bromley South within the subsequent ten years. Linking the ‘’high-level’’ building with the ‘’up’’ and ‘’down’’ platforms were pitched-roof covered walkways, each 165 and 100 feet in length respectively. When the line was initially opened in 1874, the Maidstone approaches from the west were made in decidedly rural territory; it was only beyond the station site that significant built-up areas existed. Thus, when the time came to extend the line through to Ashford, a tunnelling exercise was required, which produced two bores of 98 yards and 358 yards-long. These were named Week Street and Wheeler Street Tunnels respectively, and took the line under the town centre’s northern fringes. 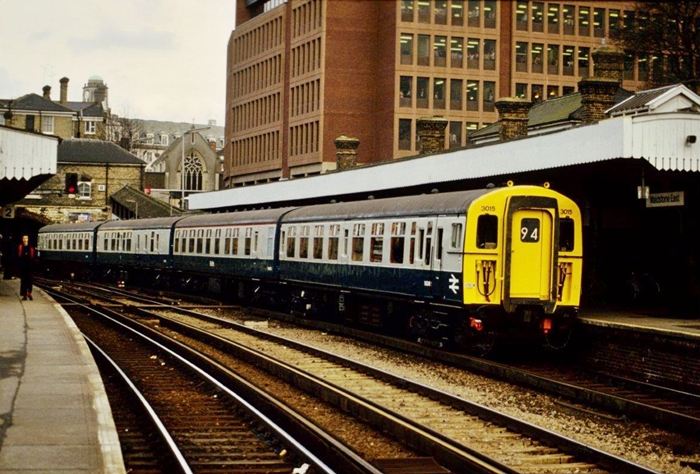 Was this the first time a 4 REP visited Maidstone? Interloper No. 3015, in sparkling condition, is seen alongside

platform 2, on the Queen's visit to the county town. © Wayne Walsh 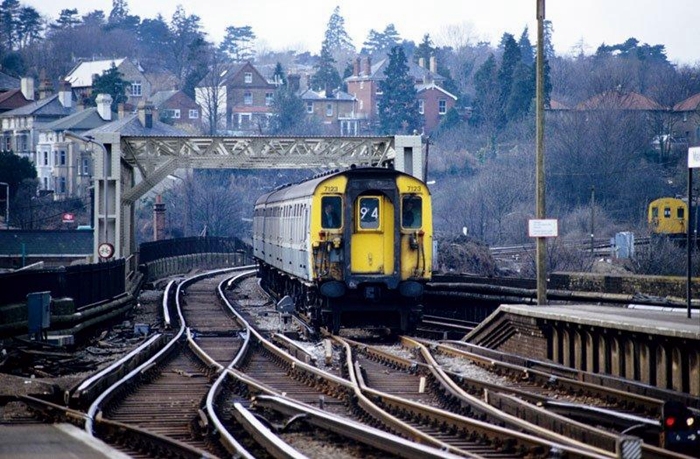 Journey's end: 4 CEP No. 7123, yet to be refurbished, rumbles over the River Medway with a London Victoria to

Maidstone East service. In the background, on the right, a EPB in all-over Rail Blue can be seen getting in on the

act. Also, in the distance, on the left, can be seen the British Rail sign of Maidstone Barracks. © Wayne Walsh 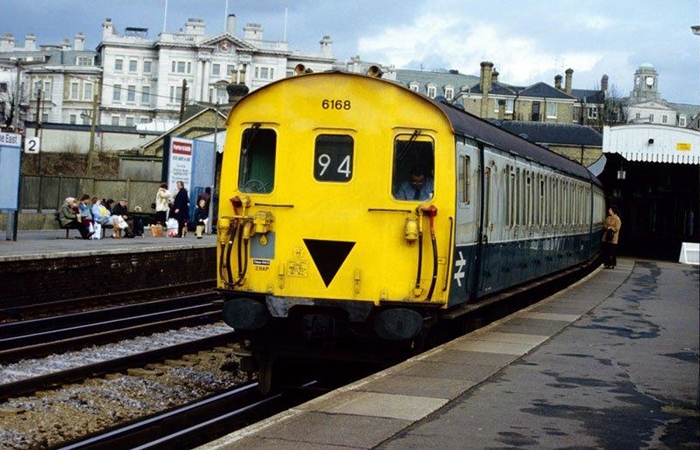 Clean 2-HAP No. 6168 will shortly be departing with a London Victoria service. The canopy on the right was

replaced by a plainer design in 1984. © Wayne Walsh 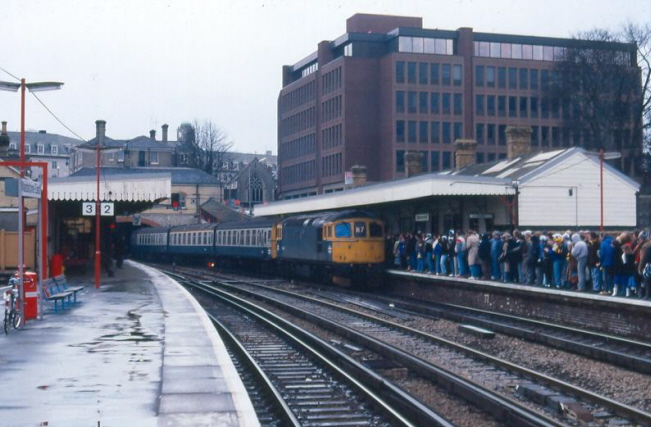 In 1986, a Class 33 is seen hauling a rake of South Western Division 4TC units into platform 1. On the extreme

left can be seen the bay platform, before it was extended and taken beyond platform 3's building. This photograph

was taken not long after the station received cosmetic attention. © David Glasspool Collection