This architecturally intriguing station was once the terminating point of a single-track branch from Paddock Wood, approved by Parliament in 1843, and completed by the fledgling South Eastern Railway on 25th September 1844. Dover had only just been reached by the same company on 7th February 1844, marking the beginning of over a decade of the SER's railway monopoly in Kent. This was the SER's first branch line, and it sustained enough traffic to justify the route's doubling in 1846. Thereafter, the SER began making significant inroads throughout the county.

A particularly notable expansion of the SER's network was that in the North West Kent area, as the company sought to extend the original London & Greenwich line to the Thames estuary towns of Dartford and Gravesend. This the concern succeeded in, establishing a plausible route from London Bridge to Strood via Lewisham, Blackheath, Woolwich and Dartford. Double-track from the outset, the line opened on 30th July 1849 and was a busy and intensively-worked line from the outset. Eastwards from Gravesend, the line ran parallel with the then (and now) disused Thames & Medway Military Canal, before diving into Higham and Strood Tunnels (1531 and 2329 yards respectively), also formerly used by the canal, but now in-filled, allowing double-track to be laid. A single track line between Gravesend and Strood had been in operation since 1845, originally opened by the Gravesend & Rochester Railway. This company was subsequently absorbed by the SER and the track doubled for the opening of the whole route from London on 30th July 1849. The SER's decision not to extend over the Medway to Rochester, Chatham and, ultimately, Faversham, proved to work against the company in the ensuing years, as it gave rise to the East Kent Railway. Instead, in 1853, Parliament approved the SER's decision to extend their North Kent Line southwards through the Medway Valley to bridge the 10¾ mile gap between Strood and Maidstone, where the original 1844-opened branch from Paddock Wood terminated. The connection opened on 18th June 1856, creating a ''loop'' in the SER's network, and Maidstone subsequently became a through station. The original station had been opened with just a single platform, but this was consequently increased to four with the inclusion of an additional through line and commissioning of two Paddock Wood-facing bay lines. A typical SER lattice footbridge, although this time with roof protection (as in use at Gravesend), was provided a couple of years before the SER and LC&DR amalgamation.

The rival LC&DR began running trains into a separate station at Maidstone via an alternate route built by the independent Sevenoaks, Maidstone & Tunbridge Railway (originally named the ''Sevenoaks Railway''), which opened on 1st June 1874. This line was a single track affair from what is now Swanley (originally Sevenoaks Junction), and passed via Otford, before immediately branching off eastwards and continuing on to Maidstone - the southwards exit from Otford led to Sevenoaks Bat & Ball station. The LC&DR's incursion into the county town resulted in the South Eastern station becoming ''Maidstone SER'', and the Chatham and Dover station becoming ''Maidstone LCDR''. This changed once again when the two rivals eventually amalgamated on 1st January 1899, the SER and LC&DR stations becoming ''Maidstone West'' and ''Maidstone East'' respectively. 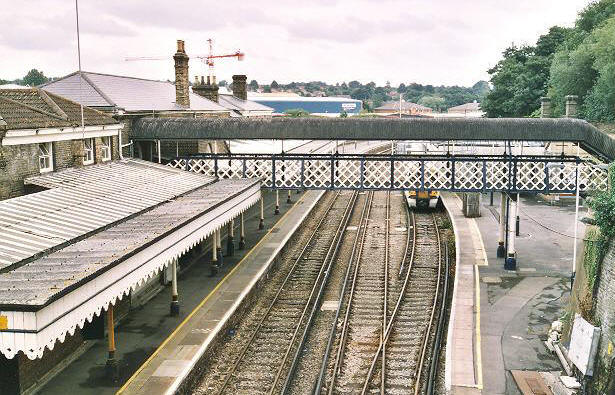 Although built by two different companies, both Maidstone West and East stations share a distinctive

characteristic. This is the sudden creation of a third through line as the platforms begin, hence creating

the 'kinked' effect of platform 1 on the right. A stranger to the line can just be seen alongside platform

1 in this 31st July 2005 southward view - a Class 375. The canopies and footbridge here were installed

a year before the creation of the SE&CR. David Glasspool 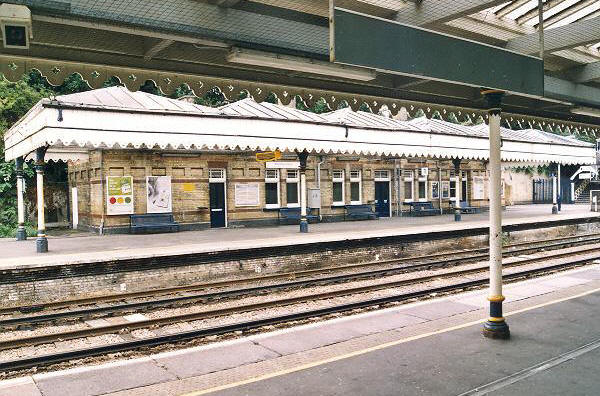 Architecture here is all typically early SER, from the buildings to the canopies to the footbridge.

elements, as all stations should do. The platform 1 building is seen from across the lines on 31st

July 2005. The whole canopy here is the same design which used to grace the ''up'' platform at 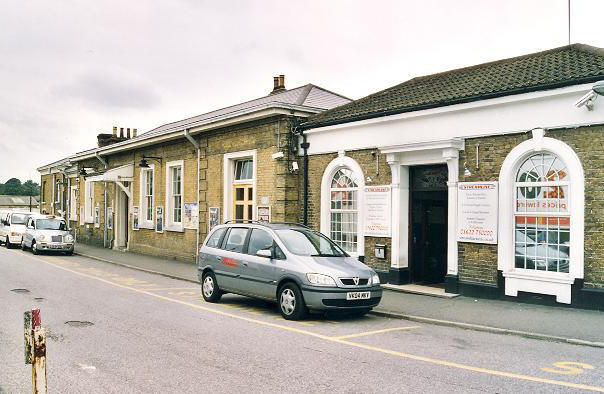