The SER commenced through running between London Bridge and Dover, via Redhill and Tonbridge, on 7th February 1844. On the completion of this Weald of Kent route, the company quickly began expanding into further areas of the county by means of branches spurring off its main line. It was as early as 23rd May 1844 that the SER received Royal Assent for the construction of a branch between Ashford and Margate, via Canterbury and Ramsgate. Scheduled services commenced over the Ashford to Canterbury section on 6th February 1846; Ramsgate was reached on 13th April of the same year, and through running to Margate initiated on 1st December. Between Ashford and Minster, the line ran alongside the River Stour, which ensured little in the form of gradients, or the requirement of significant earthworks. At Margate, the branch terminated on the sea front: in a fashion which would become seemingly typical of the SER in its later years, the station there was a hastily-assembled timber affair. Permanent structures were not to appear until 1858, by which time a potential threat to the SER had emerged.

On 4th August 1853, Royal Assent was received for the incorporation of the ‘’East Kent Railway’’ (EKR), which had been authorised to construct a 48½-mile-long line between Strood and Canterbury. The company had been instigated by residents of Faversham, who realised that the entire North Kent Coast in-between the Medway Towns and Thanet had been bypassed by the SER’s main line. The SER was not entirely to blame for this; Parliament decreed that the company had to use the existing metals of the London & Croydon and London & Brighton Railways between the capital and Reigate Junction (Redhill). However, the SER had no plans to extend the North Kent Line eastwards over the Medway, through to Chatham and, ultimately, Faversham, preferring instead to continue southwards from Strood to Maidstone, to meet up with the earlier-conceived Paddock branch. In the face of SER opposition, the EKR’s expansion was swift: on 25th January 1858, the company began operating its first section of double-track railway between Chatham and Faversham. Previously, in 1857, the nominally independent ‘’Herne Bay & Faversham Railway’’ had received Royal Assent to build an extension of the planned EKR route, in-between its namesake locations, passing via Whitstable. Alarm bells at the SER began to ring, for not only was the company’s Canterbury to Whitstable branch soon to have a direct competitor, but the future of its Thanet traffic was in doubt. The LC&DR (renamed from the EKR on 1st August 1859) began operating through to Whitstable on 1st August 1860, leasing the line from the original Herne Bay Company. More importantly for the concern, through running between Victoria and Dover, via Faversham, commenced on 3rd December of the same year, making the SER’s roundabout route from London Bridge to East Kent, via Redhill, Tonbridge and Ashford, an unattractive prospect.

Even before the Whitstable extension became operational, the original Herne Bay Railway Company had, in 1859, renamed itself the ‘’Margate Railway’’. In this year, Parliamentary approval had been received to take the proposed route beyond Herne Bay, and onto Margate, all to the despair of the SER. To put off the opening of the Whitstable to Herne Bay section of the LC&DR’s route to Thanet, the SER professed that the bridge that carried the Canterbury & Whitstable branch over the former’s line was structurally unsafe. This claim was unfounded, and through running to Herne Bay eventually began on 13th July 1861, by which time the independent Margate Railway had become the ‘’Kent Coast Railway Company’’. At Margate, land had been purchased for the building of a terminus layout, no more than 200 yards from the SER station and, by the same token, close to the seafront. During the construction of the Margate stretch of line in 1861, the independent Margate Railway Company had received Parliamentary approval for yet another extension of the original route, this time around the edge of Thanet to Ramsgate. Consequently, a re-think at Margate was required, for the line could not be extended beyond the site earmarked for the terminus (the SER station existing as one of a number of obstacles). The solution devised was to bypass the proposed terminus area, and build a completely new through affair on a sharply-curved double-track arrangement immediately to the south. The land initially purchased for the terminus station was not to be wasted, however, and the new proposals included establishing locomotive and goods facilities on the site. Scheduled passenger services beyond Herne Bay to Margate and Ramsgate, via Broadstairs, commenced on 5th October 1863.

The layouts and architecture at both Herne Bay and Margate were virtually identical, having been products of the independent Kent Coast Railway Company. Both stations were completed in 1863 – despite the fact that services to Herne Bay had commenced in 1861, trains initially called at a temporary affair. Although Margate’s platforms were constructed on a tighter curve than those at Herne Bay, in addition to the layout being host to a motive power depot, the stations were built to a standardised arrangement. Three platform faces were brought into use at Margate: two through surfaces, and one westward-facing bay on the ‘’up’’ side, all linked by a subway. The main building was positioned on the ‘’down’’ platform, being a fine red-brick structure of symmetrical design, demonstrating splendid triangular roof sections and an elegant vaulted façade canopy. Further description of the building is not necessary, for its identical sister is still in existence at Herne Bay. Canopies on both platform surfaces were flat-roof in design, and that on the ‘’down’’ side, attached to the main building, incorporated a line of glazed vaulted sections, again akin to those still in existence at Herne Bay. Notice should also be drawn to the fact that the ‘’up’’ side did also possess waiting accommodation, the building here being approximately half the size of its ‘’down’’ side counterpart.

Platform and Canopy Lengths by 1899 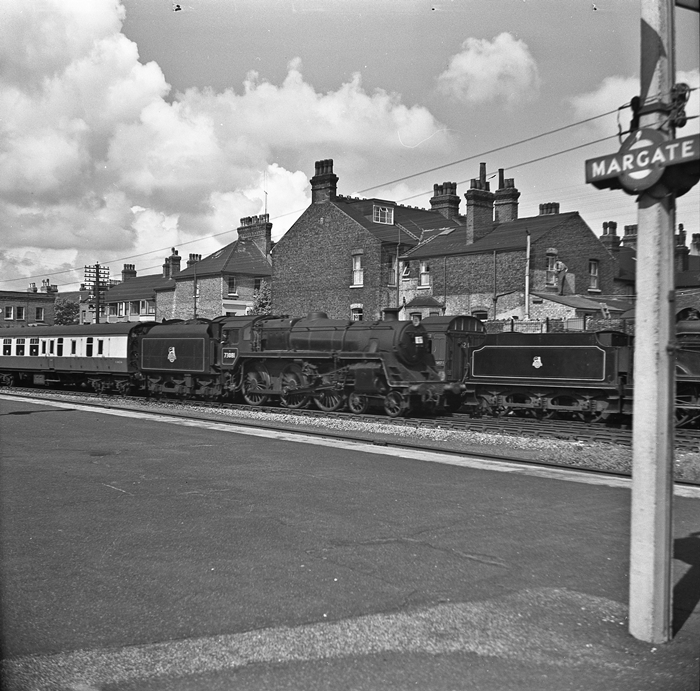 In about 1957, BR Standard Class 5 No. 73081 is seen entering Margate from the west, fronting a Victoria to Ramsgate service. This was one of twenty engines of the Standard Class 5 to be allocated to the Southern Region, the first examples arriving on the South Eastern Division in 1955. Electrification of the ''Chatham'' main line in 1959 saw these engines transferred to the South Western Division, where they were employed on virtually every type of traffic. In this year the SR Class 5 engines, Nos. 73080 to 73089 and Nos. 73110 to 73119, started to receive names which had been transferred from withdrawn ''King Arthur'' class engines. No. 73081 was subsequently named ''Excalibur''. © David Glasspool Collection 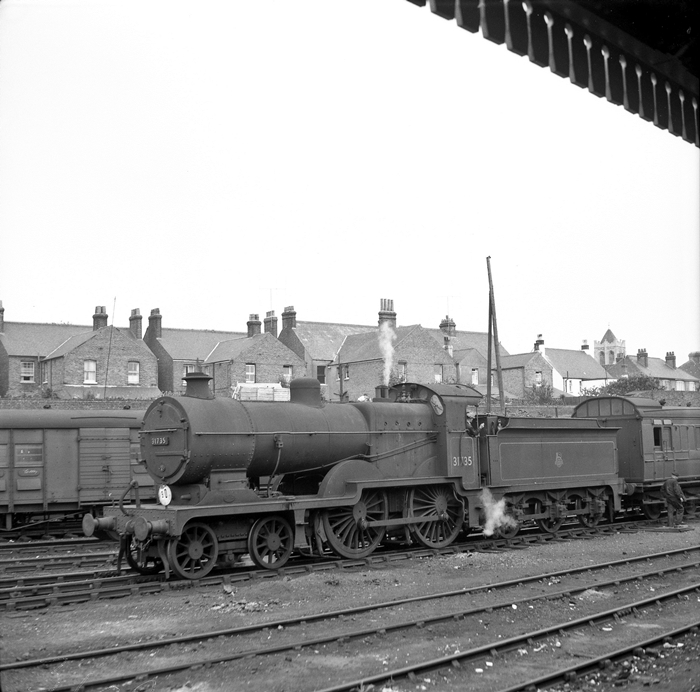 Grubby ex-SE&CR D1 Class No. 31735, with ''birdcage'' stock in tow, is seen on the southern side of the station, on the throat of the lines which led to the carriage sidings and turntable. At this time, No. 31735 was a Bricklayers Arms engine. © David Glasspool Collection 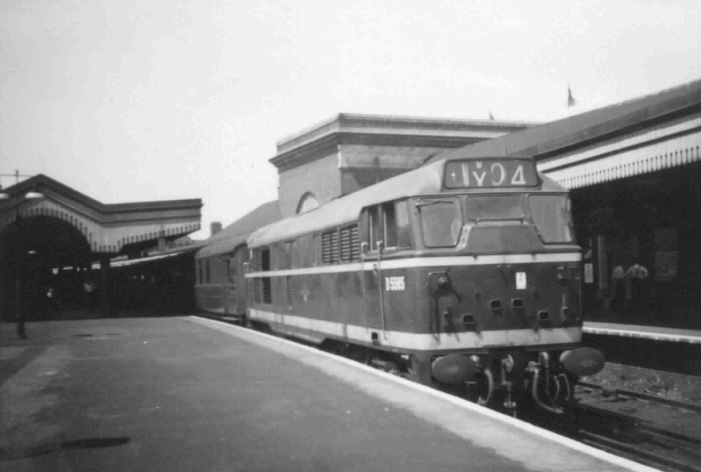 Keith Gunner has kindly submitted this very interesting image for inclusion. Brush Type 2 diesel No. D5595 (later Class 31 No. 31175 under TOPS) was observed at Margate after arrival with an excursion from Hackney Downs, on Saturday 1st July 1961. At this time, the locomotive was allocated to Stratford (30A). The train was constituted of the following ex-LNER vehicles, in order: E16645E, E13349E, SC13417E, E70748E, E13589E, and E13448E. Notice that one of these, SC13417E, was from the Scottish Region, a rare visitor to the Kent Coast! Finally, at the rear of the formation was BR Mk 1 No. E9233. The carriage stock was subsequently stabled in the goods yard. A short while after the above picture was taken, Derby-built Type 2 No. D5003 (latterly Class 24 No. 24003) appeared whilst heading a Ramsgate to Derby Friargate excursion. This was formed of ten LMSR-designed carriages. Interestingly, this Class 24 was Hither Green-allocated (73C) at the time. A batch of these diesels were loaned by the London Midland Region to the SR to provide steam heating for locomotive-hauled stock. The then new Class 33s were equipped with electric train heating supply. On the following Sunday (2nd July), Margate was host to a further pair of excursions: 1) 4 COR EMU units Nos. 3108 and 3135, appeared on a service from Eton; 2) Type 2 No. D5004, another Hither Green machine, terminated at Margate with a train from the London Midland Region, which consisted of ten carriages of LMSR design. © Keith Gunner