Once boasting a large station building and three platform faces, today this is a bleak site. Minster sits at the junction of diverging routes to Thanet and Dover (via Deal) and, sadly, became one of many stations subject to severe degrading. A couple of bus shelters are all that protect passengers from the elements, the platforms once boasting copious stylish canopies, and the only remains for the railway historian are some original lengths of iron railings and, more prominent, a still operational signal box.

The SER’s route to Thanet branched off the company’s Dover trunk line at Ashford. Canterbury was reached from the latter by means of a double-track on 6th February 1846; this line was then extended through to Margate for services to commence on 1st December 1846 – Minster opened with the Thanet section. The station here had one particular feature idiosyncratic of the SER: the platforms were partially staggered. From the outset there were two platform faces, the ‘’down’’ one being host to the station building, whilst a timber waiting shelter was a feature of the ‘’up’’ side. The main building was somewhat unusual within the confines of the SER network, for it did not appear to conform to any distinctive pattern – certainly within the eastern territories of Kent, it stood out as a sole example of its style and design. It was constituted primarily of three parts: a central two-storey section, flanked either side by two single-storey pitched-roof appendices. The platform canopy was attached to this building and its cross-section was based on a right-angled triangle, but even the valance here did not reflect the ornate SER pattern seen at other stations (such still in evidence at Maidstone West). No form of goods shed was in evidence at the site, but two freight sidings did trail off the ‘’down’’ line, beyond the junction, and terminated behind the platform. On the opposite side of the main building was a single siding, also terminating behind the platform, which came complete with a five ton crane. Finally, an additional storage siding was laid on the ‘’up’’ side, immediately to the east of the junction.

On 1st July 1847, Minster became a junction with the opening of the double-track line to Deal. Traffic on this route was light to the extent of justifying a singling programme in 1855, but ten years later this decision was then reversed and the second track reinstated. Layout enlargement occurred in 1872 when those trains bound for the Deal line received a dedicated bay line, thus converting the ‘’up’’ platform into an island. For this, the timber waiting shelter was abolished and replaced by an arched canopy with an ornate SER-designed valance, but no footbridge arrived until 1894, this being of the now familiar lattice design. The bay line was accompanied by a run-a-round loop, such the length of this being that it partially followed the curve bending round to the Deal line. The station’s first signal box was located to the east of the island platform and probably came into use around the time of the Dover & Deal Joint Railway’s opening, on 15th June 1881. As a consequence of the latter, an operational practicality was installed at Minster, this being the building of a double-track avoiding line to the east, creating a triangular junction. This eliminated the need for Ramsgate to Dover trains to reverse at Minster.

There have been cutbacks and re-openings at the site since the days of the SER; the singling and then redoubling of the Deal line has already been touched on. The existing signal box saw closure in 1929, when the Southern Railway installed a new cabin on the ‘’down’’ side, to the east of the junction, this coming into use on 23rd June of that year. The signal box was to the company’s contemporary design, hinting at the architecture of former signalling contractors Saxby & Farmer – examples had also emerged at Aylesford, Sandwich and Ramsgate. The then new cabin was commissioned concurrent with the re-opening of the Minster avoiding line, which had been removed in about 1916 as a cost-cutting measure in response to World War I. Despite these junction and signalling alterations, the station retained its three platform faces and goods facilities. Indeed, traffic at the latter did not finally cease until September 1963, this being after the introduction of the accelerated electric timetable on 18th June 1962. Electrification brought third rail to Minster, but it did not see the procurement of colour aspect lights, and the track layout here still remained fairly complex. The station did not wholly escape the typical demolitions of the 1970s, and the pleasing island platform canopy was unceremoniously obliterated and replaced by a single bus shelter. The lattice footbridge was removed concurrent with this and a more austere structure erected in its place, conforming to British Rail’s ‘’Modern Image’’. At least the vintage main station building remained intact on the ‘’down’’ side – for now.

Merely a decade passed before further, more serious rationalisation began to be implemented. This affected both track work and signalling: the original double-track spur from the station to the Deal line was singled during the Summer of 1981. This was coupled with the removal of the bay line, the decommissioning of the associated platform face, and the lifting of the sidings which had appeared alongside the diverging track since the initial signalling alterations of 1929. The impressive double-armed semaphore signal brackets were replaced with three-aspect colour lights and the final resultant was a basic layout comprising the double-track Ashford to Thanet line, and the single spur of the Deal line. The main building, of considerable vintage and antiquity, was not to escape the bulldozers and this finally came crashing to the ground in November 1989 – a very sad end for a once attractive station. 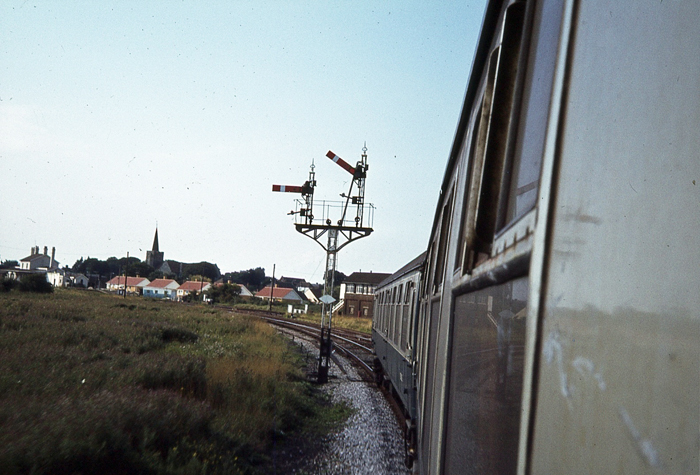 Approaching from the Dover & Deal Joint line, the semaphore signal positions indicate that our train is heading for platform 2. On the far left of the picture can be seen the original station building, which was demolished ten years later. © David Glasspool Collection 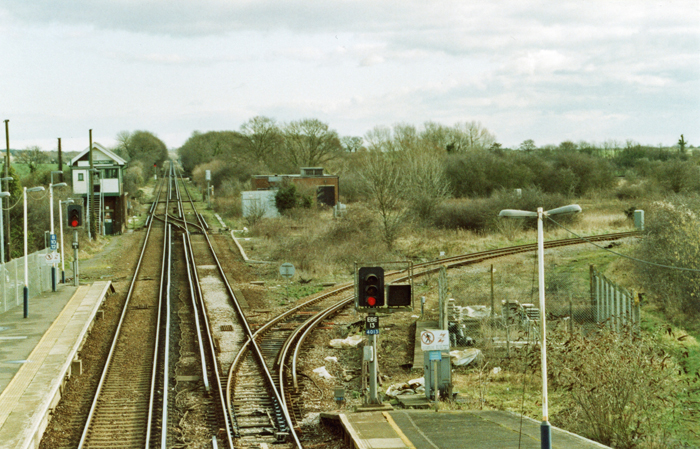 An eastward view reveals the layout's oldest building: the signal box of 1929 origin. Branching sharply off to the right is the single-track spur to Deal - its counterpart, which completes the triangle, can just be seen in the distance, to the upper right of the lamppost. This is not the original divergence point of the Deal spur, the junction instead having been nearer the crossover points alongside the signal box. The position was changed during the rationalisation of the layout in 1981. Therefore, the overgrown areas on both sides of the spur were formerly track beds. © David Glasspool 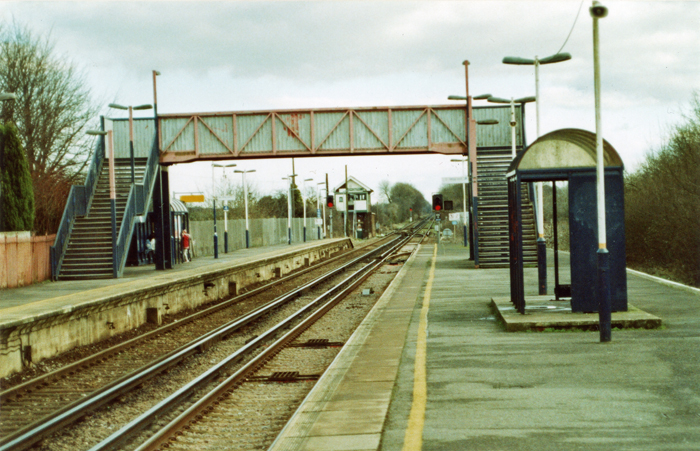 Another eastward view shows the 1970s footbridge and the two bus shelters, these of 1990 origin. The fenced off area beyond the footbridge, on the ''down'' platform, is where the station building formerly resided. On the right is the former platform face of the bay line. Until about 1970, the station name boards displayed ''Minster (Thanet), Junction for Sandwich, Deal and Walmer''. © David Glasspool 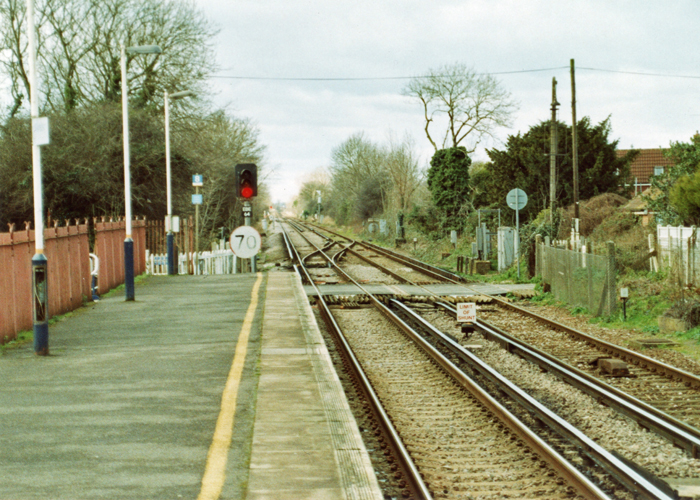 This westward view includes the level crossing, a crossover, but also a feature of some antiquity. On the left, in faded red, is the only station remnant of SER origin - the platform railings. These also appear on the left of the previous picture. © David Glasspool