The station was opened as ‘’Eltham’’ with the Dartford Loop Line on 1st September 1866, named after the larger settlement some ¾ mile to the north (there was no Bexleyheath line at this time). The character of the route was perpetuated here, with clapboard being used throughout the construction of the station’s buildings. Like at Bexley, the larger of the structures - single-storey and with a pitched-roof - was positioned on the ‘’down’’ platform, and came complete with the route’s now familiar flat-roofed canopy. The smaller ‘’up’’ side building was again harmonious with the similarly positioned example at Bexley, demonstrating a length which was half that of the ‘’down’’ side structure. The building also boasted a canopy, something the ‘’up’’ side structure at Bexley lacked, but in addition to this, a covered waiting shelter (which rivalled the ‘’up’’ building in size), was still provided immediately to its east. The platforms here were linked by the once common track foot crossing; a lattice footbridge did not appear until about a quarter of a century later.

The development of sidings at this station has been particularly interesting. The first arrangement of note is that of the goods yard: this was in evidence on the ‘’down’’ side, to the west of the platforms, and merely consisted of a pair of westward-facing sidings. No goods shed was ever built, and for many years the yard handled locally grown produce. As the surrounding land was developed, especially after electrification, increasing quantities of coal traffic was dealt with here. The layout was controlled by a signal box located just beyond the western end of the ‘’up’’ platform – taking into account the similarities this station has with Bexley, this would more than likely have been a two-storey all-timber SER designed product. However, around the turn of the century, the ‘’down’’ side was a recipient to half a dozen rolling stock sidings, all eastward facing, positioned directly opposite the goods yard and maintaining a single-track connection with the latter; similar storage provision had also been made at Blackheath around the same period, although this station featured double the sidings. In connection with this, the original SER signal box was taken out of use and a replacement cabin opened barely fifty yards to the west of it.

In the meantime, the station had witnessed a name change: from 1st January 1892, it became known as ‘’Eltham & Mottingham’’. It retained this name throughout its whole SE&CR existence, despite Eltham receiving its own, much more conveniently sited station on 1st May 1895. The latter was known as ‘’Well Hall’’ from the outset, differentiating it from the station on the Dartford Loop Line. The coming of the Southern Railway heralded swift electrification, regular EMU diagrams commencing on 6th June 1926. A three-storey high substation was built at the site in connection with this, and in virtually all cases when these structures were erected, it became the most imposing building in the area. The SR made its usual modifications to the gas lamps, implementing its own design, and the company’s last course of action appears to be further modification of the name. The prefix ‘’Eltham’’ was dropped and from 1st October 1927, the station was known as ‘’Mottingham’’; Well Hall station had since become ‘’Eltham (Well Hall)’’ on 26th of the previous month.

Mottingham appears to have received quite considerable attention in connection with the ten-car train scheme. In Spring 1955, the platforms were lengthened at their western ends with prefabricated concrete, in preparation for the longer formations due to begin operation on 13th June of that year. During the morning rush-hour, there were four services formed of ten vehicles, whilst evening rush hours consisted of three such trains. The full ten-vehicle rush-hour timetable did not commence until 4th March 1957. This required a power supply upgrade, which saw Mottingham’s substation demolished in that year and subsequently replaced by more powerful modern equivalents at New Eltham and Hither Green. The platform buildings also received significant structural alterations: beginning with the ‘’down’’ side, the clapboard building saw its pitched roof cut back at its westward end by some 22 feet, but the two chimney stacks were still retained. Part of the clapboard wall on the structure’s northern elevation was also taken out, at the point where the roof was removed, and this has subsequently been opened out as part of the adjacent builders merchant’s site! The platform canopy was also taken down and replaced by a corrugated metal example, this being some 16 foot shorter than the SER design, although three of the four original stanchions were reused. The ‘’up’’ side alterations were arguably more significant. The eastern third of the clapboard structure was demolished, in addition to the removal of the SER platform canopy and the large waiting shelter to the building’s east. To compensate for the loss of the copious protection from the elements, an upward-slanting metal canopy, 175 foot in length, was installed, this being backed by brick and corrugated metal. Additional brick-built offices also appeared on the structure’s southern elevation, coupled with a new station entrance – the latter received sliding doors in 1988.

The 1960s heralded a general decline for the station. The 7th October 1968 marked the closure of the goods yard and the decommissioning of five of the six rolling stock sidings. One of these sidings was retained for a number of years beyond this date for emergencies, but was more often than not clipped out of use. The closure of the Railway Signal Company signal box preceded the commissioning of the Dartford Panel, it succumbing on 14th September 1969. In 1992, the platforms received yet more lengthening for the scheme that never was – twelve vehicle formations – and ten years later, the concrete platform backing was replaced by palisade fencing. 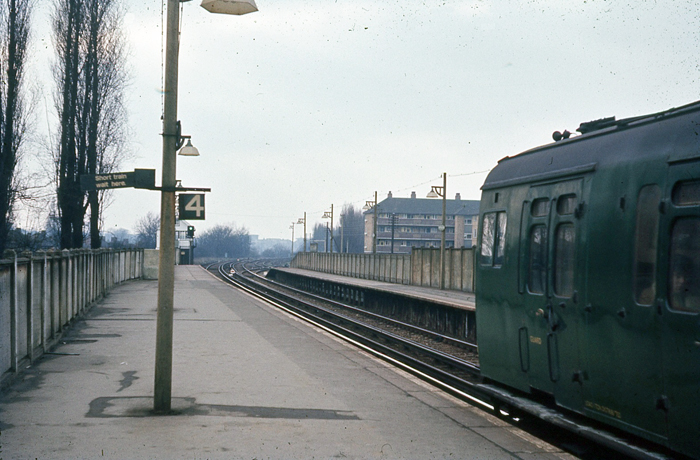 A Bulleid-designed EPB, wearing all-over BR(S) Green, is about to depart the "up" platform, forming a four-coach service to the capital (if the "Short train wait here" and "4" signs are accurate!). Prominent in this London-bound view are the prefabricated concrete platform extensions of 1955, which still had traditional green nameboards affixed, in addition to "Sausage" Totems upon bracket lampposts. Partly obscured by the the lamppost on the left is the signal box of about 1900 origin. On the opposite side of the running lines to the signal box can be seen the rolling stock sidings, dating from the same period, these of which were not electrified. The goods yard sidings terminated behind the "down" platform on the right. © David Glasspool Collection 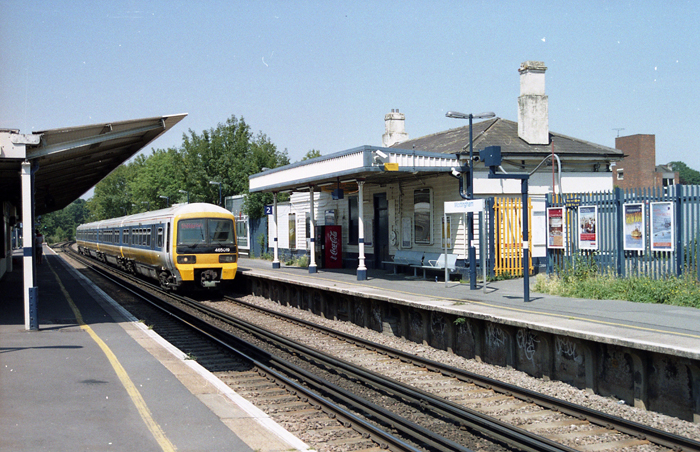 Class 465 No. 465019 trundles into Mottingham with a Dartford-bound service. Prominent in this view is the "down" side building which, despite 1957 modifications, still retains a traditional air about it. The canopy is clad with corrugated metal, and the three stanchions are original SER products. The furthest chimney stack from the camera is where the pitched roof terminates. On the left is the edge of the 1957 upward-slanting canopy. This was the typical architecture used during the Kent Coast Electrification period. © David Glasspool

An eastward view from the "up" platform reveals both sets of canopies and the SER lattice footbridge. The goods yard was behind the row of trees on the left. © David Glasspool 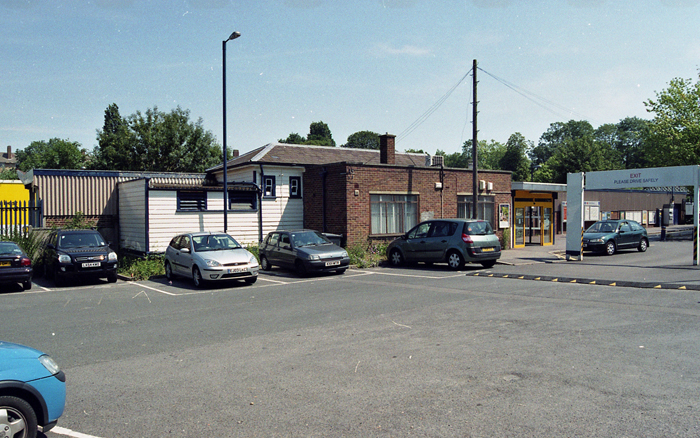 A look at the rear of the "up" building shows quite a mixture of structures. The white clapboard is naturally the oldest, dating from 1866, followed by the brown brick of 1957 and, finally, the sliding doors of 1988. © David Glasspool