After spending seven years at the ScotRail division of the Provincial sector, ultimately becoming General Manager of the former, Chris Green moved on to become Managing Director of the London & SouthEast sector in January 1986. London & SouthEast was responsible for the operation of train services on all slow lines out of London (i.e. those not covered by the InterCity business sector), with a notable monopoly of train operations in Kent, East Sussex and West Sussex. The then new Managing Director was keen to promote a brand new image for the sector, one which would encompass a vivid livery and more improvements for passengers. Thus, on 10th June 1986, ''Network SouthEast'' was born. The launch of the re-branded sector to the media was a controversial one, the very colourful livery sparking mixed reactions among the press and railway enthusiasts. Class 50 No. 50023 ''Howe'' was unveiled to the public at Waterloo Station on the day of Network SouthEast's launch and Chris Green was determined to have at least one NSE liveried train working on each route from the outset. The British Rail Board made it clear that the decision for a sector re-branding would increase the running costs of business sector considerably, with more money going towards the repainting of stock. The BRB argued that re-painting motive power and rolling stock immediately would not be cost-effective due to the existing paintwork on vehicles being far from life-expired. As a result, it was estimated that all stock would be painted over a period of six years, with very old stock not receiving the livery at all, and this would set the sector back a projected extra cost of £500,000 a year.

Most services on the former Southern Region network were operated by Network SouthEast, the InterCity sector dealing with long-distance cross-country workings which penetrated the Southern boundaries, and the Gatwick Express. Freight was dealt with by Railfreight and, after 1987, the various TrainLoad sectors. Network SouthEast's operating boundaries also extended far into East Anglia on the Eastern Region and Oxfordshire on the Western Region. As a result of the extensive railway coverage in the general south east area, the sector was divided up into operating regions:

o        Plus: Brighton to Exeter via Portsmouth

o        Dartford and Gillingham (via Sidcup, Bexleyheath or Greenwich)

o        Dover via Sevenoaks and Tonbridge, or via Faversham

Network SouthEast services operated over 2350 route miles of British Rail's 20,336 mile long railway network from the outset, serving an estimated population of 18 million people on its routes combined. The sector moved some 400,000 people into London during the morning rush-hour period on Mondays to Fridays, utilising 1700 trains, predominantly of the electric multiple unit type. Electric multiple units used by Network SouthEast totalled a staggering 5968, whilst separate diesel multiple unit formations accumulated to 479, and finally,  443 locomotive-hauled carriages of the BR Mk 1 and Mk 2a specification constituted the remaining passenger fleet. The rolling stock fleet was responsible for the serving of passengers at 930 different stations, these of which were served by 5500 miles of track controlled by just under four-hundred separate signal boxes. Furthermore, Network SouthEast managed thirty-five depots for the maintenance and general cleaning of stock, whilst the sector employed a total of 41,000 staff across all its regions, including headquarter offices. In short, Network SouthEast was the largest out of the five British Rail Business Sector's established in 1982 and was Britain's 15th largest business. 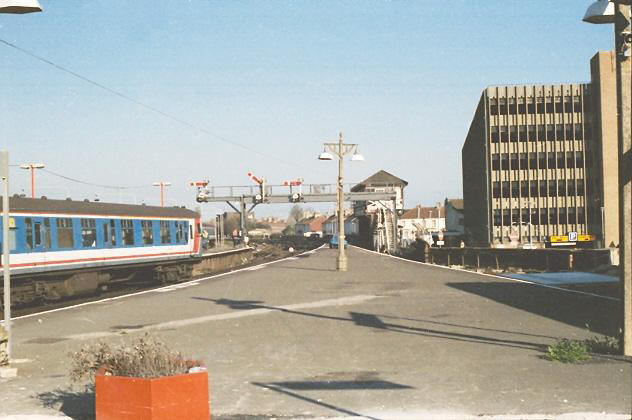 concern for the British Rail Board. Much of the sector's fleet had only recently received new coats

of paint, notable examples being the 4 Ceps on the Hastings line and the Class 50s after their

overhaul at Doncaster (which was completed in 1983). The BRB stated that another repaint would

be uneconomical and thus the work would have to be spread over six years. Additional costs were

also attributed to the promotion of the new sector. A 4 Cig in the distinctive Network SouthEast

colours is seen stabled in platform 2 at Eastbourne on 7th November 1990. The semaphore signal

gantry dominates the background whilst the signal box can be seen on the right-hand side. 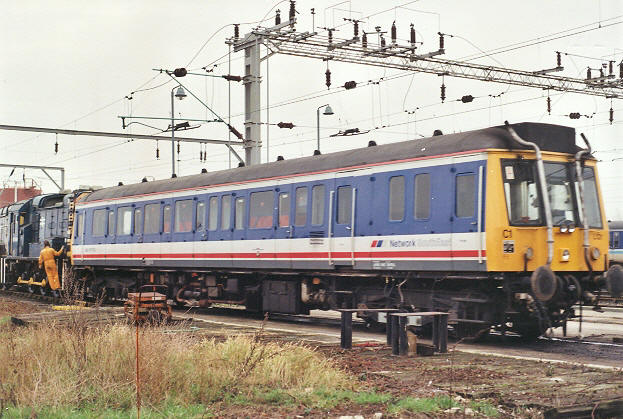 From the outset, Network SouthEast had a very interesting variety of stock, both in multiple unit

form and in terms of locomotive types. In this view from 19th January 1992, one of the sector's