The Southern Railway appeared to perpetuate the SE&CR's habit of opening latterly-conceived halts on secondary routes; New Hythe Halt was one of these, coming into use on the northern half of the Medway Valley Line on 9th December 1929. Its raison d'être was to serve the huge paper mill complex which had established itself beside the line (which has now become ''Aylesford Newsprint''). Indeed, New Hythe demonstrated the qualities of a quintessential halt, comprising two platforms constituted of wooden planks, these of which laid directly opposite each other, separated by the double-track. Each platform was host to a timber waiting shelter, akin to those secondary waiting facilities found at most intermediate stations, which provided copious weather protection for the level of traffic dealt with - they were certainly more effective and spacious than the ''bus shelters'' of modern times, despite lacking a canopy valance. Of course, no footbridge would have been dedicated to such a minor station and the level crossing at the northern end of the platforms was used by passengers to cross the tracks, much like the practice still in use at Stone Crossing. However, if passengers were willing to walk a short distance to the south of the platforms, a public footbridge was available for use. Construction of the adjacent paper mill had begun in 1920 and this received a rail connection from the outset, when it opened two years later. This trailed off the ''down'' line, approximately ⅓ mile to the south of the platforms, and connected with the mill's domestic standard gauge network.

The SR extended its suburban electrification scheme to Maidstone West and Gillingham in 1939, and for this New Hythe Halt was to see total transformation. All original fabrications were done away with and replaced with much more permanent-looking structures, built to the solid architecture of the period. The platforms switched from wooden to concrete construction and each, 540-foot long, played host to square brick-built waiting facilities. These in turn each boasted an upward slanting canopy, replicating the design of the examples which had appeared at both Bexleyheath and Welling during their 1931 rebuilding. A single-storey brick-built signal box, square in appearance, opened with the rebuilt station, being situated on the ''up'' side, sandwiched in-between the platform end and the level crossing. This controlled the connection with the paper mill, whilst it also being the signalman's duty to move the manual crossing gates. Electric working down the line to Maidstone commenced on 2nd July 1939 and for this, the station lost its ''Halt'' suffix.

Since the rebuilding, there have been a number of changes. First of note was the inclusion of a pressed steel footbridge, erected concurrent with the June 1961 electrification of the Maidstone West to Paddock Wood section of the line. For a station of its size, the footbridge here is unusually large, comprising two flights of concrete stairs on either side. Modernisation came in November 1972 with the replacement of the manual crossing gates with automatic barriers, again controlled by the signalman, but this time from the comfort of the signal box. This level crossing was itself removed in the mid-1990s with the opening of the New Hythe Industrial Estate, which saw the approach road carried over the tracks on a flyover. As a consequence of this, the signal box's sole purpose was to control the semaphore signals which protected the station and the connection with the paper mill. Re-signalling of the Medway Valley Line from December 2004 onwards sought to remove the remaining semaphore signals from the route. With the installation of colour lights at New Hythe, control of all functions at the site were passed to the signal box at Aylesford and on 5th November 2005, the diminutive signal box officially went out of use. 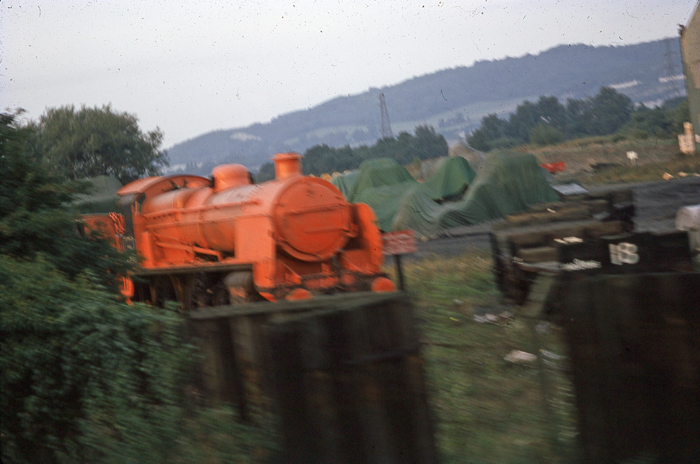 In 1969, "U" Class No. 31618 arrived at New Hythe for storage and cosmetic restoration, after purchase from Barry Scrapyard by the "Southern Mogul Preservation Society" for £2,000 (about £32,000 at 2018 prices). The locomotive had been towed by a Type 3 (later Class 33) diesel via Dartford and ended up in a siding about 100-yards north of the station, beside the "down" line. The locomotive moved to the Kent & East Sussex Railway in 1972 and, eventually, to the Bluebell Railway in 1977. © David Glasspool Collection 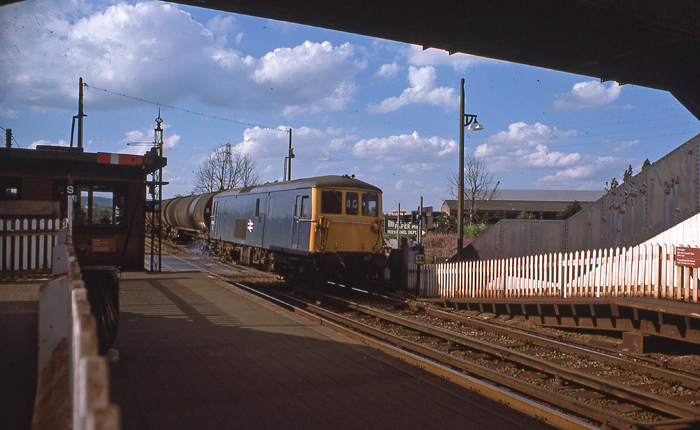 The signal box of 1939, complete with the "up" starter semaphore, is seen on the left of this view depicting an Electro-Diesel passing over the level crossing with a rake of tankers. David Morgan has suggested that this is most likely a service from Hoo Junction to Brookgate Siding, which will reverse at Maidstone West, conveying heavy fuel oil from Grain Refinery for Reed's Paper Mill. Although the headcode "4G" applied to freight trains between Hither Green and Tonbridge via Sidcup, it also applied to those running between intermediate points which did not have their own headcode - e.g. Hoo to Holborough. The other reason why it is believed to be a service for Brookgate Siding is that the 102t tank cars were primarily used for heavy fuel oil, which was despatched from Grain Refinery to the South Eastern Division destinations of Brookgate Siding, Dover, and Richborough. In front of the locomotive is milepost 38 from Charing Cross via Greenwich. © David Glasspool Collection 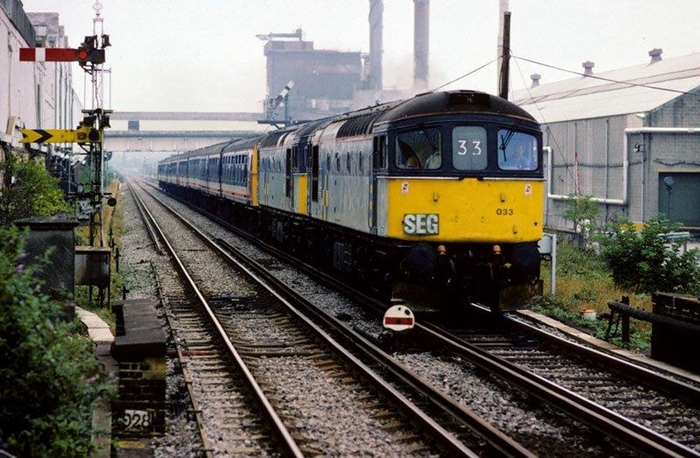 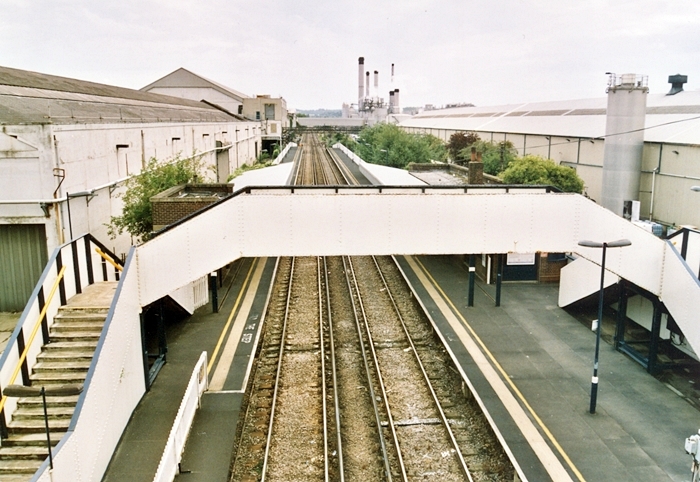 A southward view from the road bridge shows a very industrial landscape. The station dates from electrification to Maidstone West in 1939, but footbridge is of later vintage, from 1961. © David Glasspool 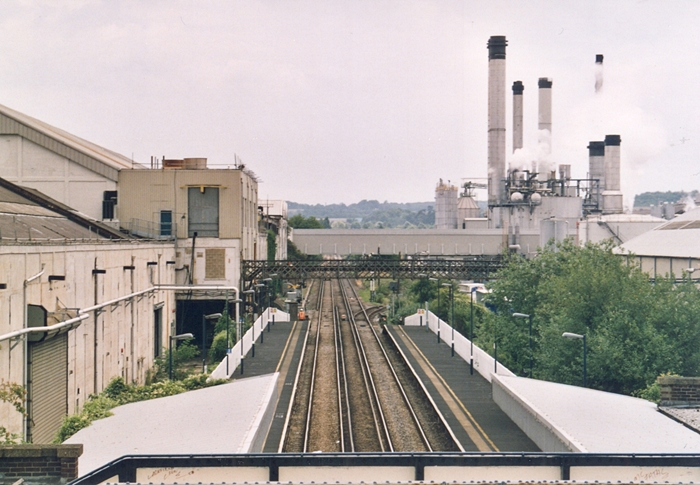 Another southward view from reveals a single-track connection with the paper mill trailing off the ''up'' line. © David Glasspool 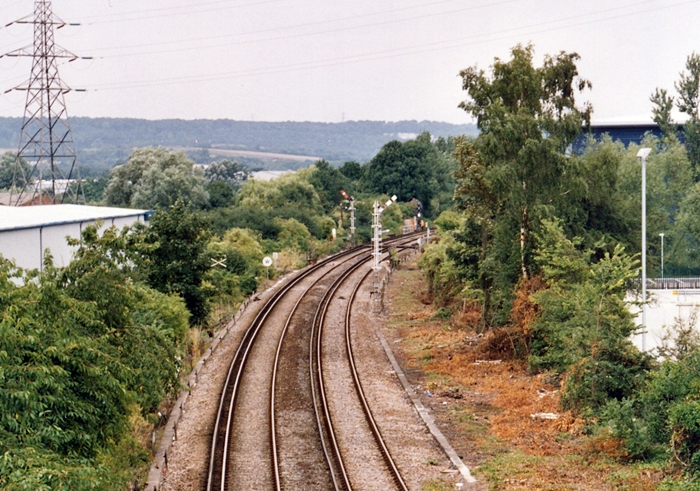 A northward view from the road bridge reveals a pair of semaphore signal posts still in use, whilst their replacement is seen behind. © David Glasspool