This interesting site had for long been involved with cement production, an association which was brought to a close in December 2008 with the decommissioning of the Northfleet Works. This was due to exhaustion of chalk from Eastern Quarry, the works’ main supply source which resided about a mile to the south west. The end of an era was marked by the ceremonial demolition of the twin 550-foot-tall chimneys on 28th March 2010. The cement works dated back to 1969, when it was commissioned by APCM to replace a number of older complexes nearby. APCM was rebranded ‘’Blue Circle Industries’’ in 1978, and this company was absorbed into the empire of French-owned ‘’Lafarge’’ in 2001.

In March 2009, Lafarge submitted an application to Kent County Council for permission to operate a bulk aggregates import terminal at the former cement works site. This was to handle up to 3,000,000 tonnes of material per annum, most of which would be crushed rock, the rest being marine-dredged aggregate. Materials would be brought in by boat and unloaded onto an existing operational wharf of 978-foot length and 42-foot depth. These loads would subsequently be dispatched onwards by road and a renewed rail link. With reference to the latter, this had formerly been a merry-go-round loop for the cement works, which made a connection with the North Kent Line to the north west of Northfleet station. Sidings once existed behind the ‘’up’’ platform of the latter, and access to the cement works was afforded by two tunnels (‘’Western’’ and ‘’Eastern’’) bored through a chalk ridge, enabling a link-up with British Rail metals. There also existed a third tunnel to the west, which allowed road access.

Gypsum trains last ran over the MGR loop on 19th March 1993, but the track remained in situ thereafter, most of it subsequently being lifted by ‘’Union Railways’’ in connection with Phase 2 of the Channel Tunnel Rail Link (CTRL). Under the CTRL Act, Union Railways had an obligation to reinstate key parts of the former MGR loop. This extended to those rails which followed the alignment of the previous arrangement; the obligation did not cover those new sidings upon the former cement works’ site, or track within Church Path Pit which deviated from the original course of the old layout. No additional rights were needed to re-establish sidings behind the ‘’up’’ side of Northfleet station. The reinstated rail link was not to form a loop as per the previous arrangement, and only Eastern Tunnel would receive track, although Western Tunnel would still be cleared. Hitherto, both tunnels had been blocked up since the cessation of gypsum operations. Track laying in Church Path Pit commenced in July 2009.

In June 2011, ‘’Crossrail’’ reached a lease agreement with Lafarge to take over part of the former 104-acre Northfleet Cement Works site. It was proposed to use the area for the temporary storage of spoil excavated from Crossrail tunnelling operations between Royal Oak and Farringdon. Construction of the tunnel portal at Royal Oak began in January 2010 and was completed in September of the following year. On Thursday 3rd May 2012, tunnel boring from Royal Oak started, involving the driving of twin bores under Central London, each 6.4 KM (3.98-miles) in length. The fact that the waste spoil from these operations could be transported away by sea from a deep water wharf at Northfleet, after delivery by rail, was a major reason why the former cement works site was chosen by Crossrail.

Reinstating the railway link between the Northfleet site and the North Kent Line was priced at £13,000,000, and Lafarge appointed ‘’Balfour Beatty’’ as the main infrastructure contractor for the project in July 2011. The works included the laying of nearly three miles of new track, extending for just over 1½-route-miles, in addition to re-signalling on the North Kent Line in the Northfleet vicinity. ‘’Arrival’’ and ‘’Departure’’ loops were laid behind the station’s ‘’up’’ platform and a series of illuminated bollards installed between them, to light a central walkway. A single-track curved approach towards an unblocked and well-lit Western Tunnel was laid within Church Path Pit. At the portal, a northward-facing siding was provided, and a double-track formation was carried through the tunnel. On the northern side of the chalk ridge, the link widened to three tracks, which were laid immediately west of a huge ‘’Bulk Powder Import Terminal’’. The triple track formation was extended northwards and curved round to run parallel with the adjacent river. The line was protected on either side by 1.8-metre-high palisade fencing and linked to the wharf by an enclosed conveyer belt. To meet port security regulations, the wharf has been equipped with 2.4-metre-high fencing. 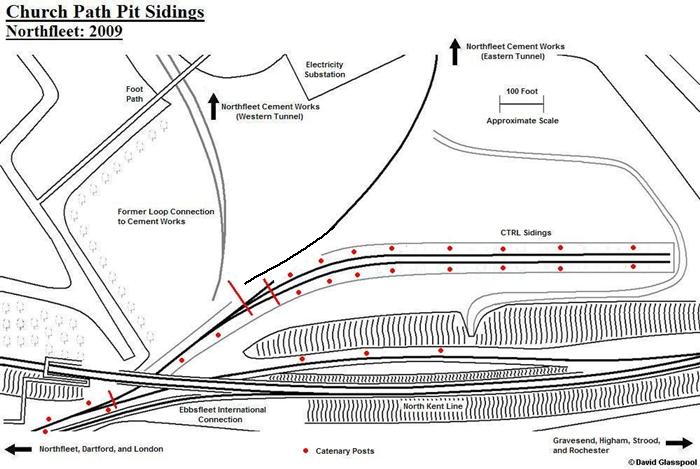 The 2009 arrangement at Church Path Pit including the North Kent Line, CTRL infrastructure, and the partially-laid new connection to the cement works site. Drawn by David Glasspool 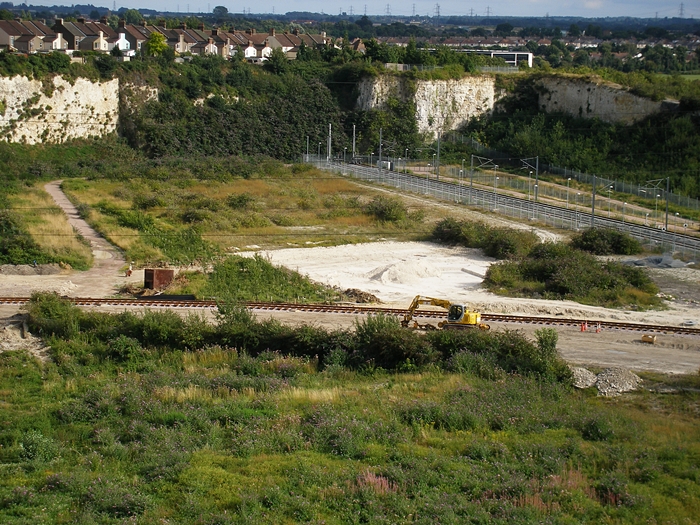 A view of a sunny Church Path Pit reveals the two CTRL sidings in the background, feeding off the spur from Ebbsfleet International. In the foreground can be seen the newly laid single-track line bound for the cement works. At this time, the track terminated at the then still blocked-up portal of Eastern Tunnel, and the Crossrail lease agreement was nearly two years away. © David Glasspool 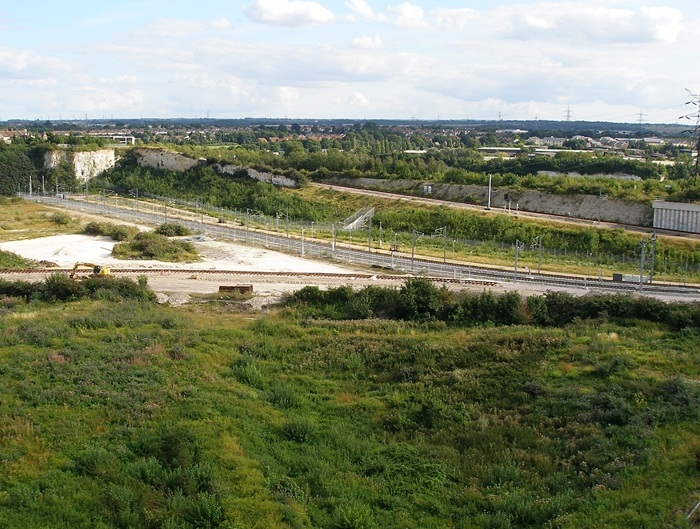 At the time, the line was physically isolated from CTRL metals, but a three-way set of points had already been formed, feeding off the two CTRL sidings. As will become clear in the later pictures, this was not used as a connection for the cement works' spur. In the above view, there are rails on three levels: those in the foreground, within Church Path Pit; the single track behind, which ascends to the North Kent Line; finally, at the very top, the North Kent Line itself. © David Glasspool

Next: The Story Continues >>