Pluckley is reputedly the country’s most haunted village. A station was opened 1¼-miles south of here on the commencement of South Eastern Railway services through to Ashford, from London Bridge, on 1st December 1842. Along the earliest sections of route opened by the SER, many of the rural intermediate affairs had little in the form of station infrastructure from the outset. Indeed, it is true that at several ‘’station’’ sites, the company merely provided wooden planks, these bridging the gap between ground level and the floor of railway carriages. It is probable that, initially, this was the situation which presented itself at Pluckley. However, a layout recognisable as a station would have come into use not long after through running commenced to Dover, in February 1844. The arrangement established here was typically SER, with a pair of staggered platform faces residing either side of a double-track. The ‘’up’’ and ‘’down’’ platforms’ longitudinal positions were west and east of each other respectively, and it was the latter which became host to the 70-foot long main building. This was an economical single-storey timber affair, constituted of horizontally-aligned tongue-and-groove planks (as per that SER structure still in existence at Northfleet), and demonstrated a slated pitched-roof. No less than three chimney stacks formed part of this building: two emerged through the roof, whilst a third was attached to the structure’s eastern elevation. Three sets of double-doors were in evidence on the platform-facing façade, and these were matched in number by the casement-style window frames. Emerging from the western elevation was a small appendix of marginally reduced height. Naturally, a track-foot crossing existed between the two platform surfaces.

Goods facilities were expanded over time. Within thirty-five years of opening, a single eastward-facing siding had emerged on the ‘’up’’ side, residing at about seven degrees to the running lines. Furthermore, a westward-facing dock line was also in evidence on the ‘’down’’ line, terminating beside the western extremity of the platform. The latter was accompanied by a trio of south-westward-facing tracks, which skewed away from the running lines – the northern most of these sidings terminated within a goods shed (the layout developments are later illustrated in diagram form). All goods yard tracks on this side, including the dock line, could only be accessed by means of a reversal manoeuvre via a headshunt. Finally, at the eastern end of the ''down'' platform existed a westward-facing siding, which had a facing connection with the ''down'' running line and served a line of coal stacks. At this time, individual sets of points were operated by immediately adjacent levers, but nevertheless, a diminutive signal cabin was still erected. This was a single-storey timber-built pitched-roof affair, residing at the eastern end of the ‘’up’’ platform. It seems unlikely that this structure contained any form of lever frame, and rather, it would appear that it merely provided sheltered accommodation for the signalman, whom would operate the adjacent semaphore signal and point levers by hand.

In about 1885, the SER significantly altered the layout here; this included the rebuilding of the ‘’down’’ side main building. All four existing timber elevations of the structure were removed and subsequently replaced by sides of clapboard construction, set upon a shallow brick base. These differed from the previous tongue-and-groove fabrications by having horizontally-aligned planks of overlapping formation. In conjunction with these works, it would appear that the structure was both lengthened and widened, thus producing a virtually new building. A diminutive canopy, identical in design to that still in existence at East Farleigh, emerged on the building’s approach road-facing façade. The original structure’s aforementioned western appendix was lengthened sideways, and its flat-roof was replaced by a slanting one. Interestingly, the platform-facing façade of the appendix continued to demonstrate tongue-and groove timber, suggesting that wood from the original main building was reused in its extension. However, the side and rear walls of this particular section were of clapboard construction. Further to these modifications, both platform surfaces were rebuilt to a higher profile, and the ‘’up’’ surface received an attractive timber waiting shelter, of about 20-foot in length with an upward-sloping roof – it is likely that this was constituted of recycled wood from the original ''down'' building. The ''down'' coal siding was relayed, so now it was eastward-facing and terminated behind the platform. In addition to this, a 540-yard-long eastward-facing siding was installed beside the ‘’down’’ running line, immediately west of the road bridge. The presence of the latter prevented this line joining up with the existing goods yard. Also of importance is the connection made with the 1877-opened ''Pluckley Brick & Tile Works'': this, too, fed off the aforementioned ‘’down’’ siding as a single-track, heading off in a north-westerly direction to meet the kilns of the complex. 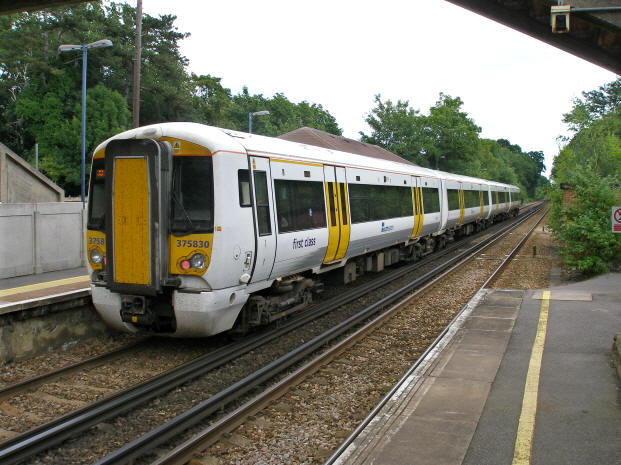 A Class 375 with a name is observed at Pluckley, forming a Victoria to Ashford service: No. 375830

''City of London''. The metal lamp posts in evidence are of 1990s origin. David Glasspool 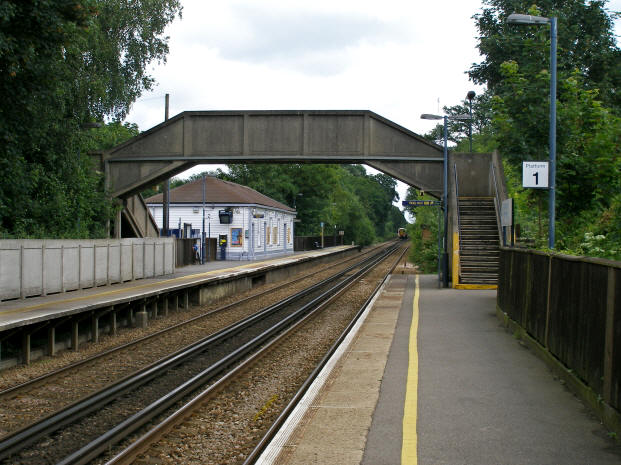 building, and the later ''down'' side concrete platform extension. The timber fencing on both platforms

has been a feature of the station since the earliest years. David Glasspool 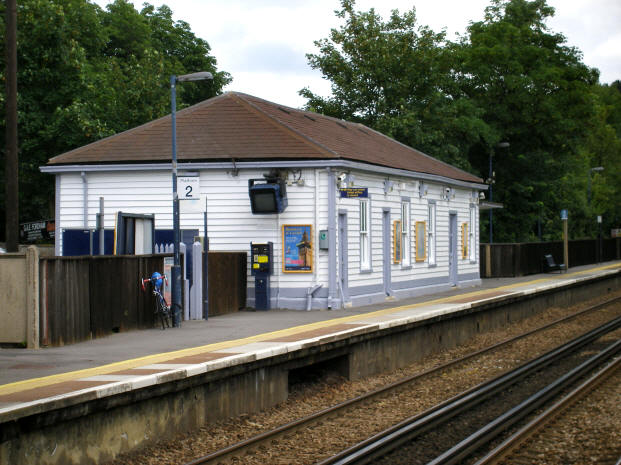 The clapboard structure in evidence on the ''down'' platform today is of about 1885 origin, the

original timber building having been replaced during station enlargement works. Of note are

the SER's trademark sash-style windows and the distinct lack of the building's western appendix.

Also in view is the solid concrete platform surface of the Southern Railway; the distinct hole in