The 30th July 2003 was a significant date in the history of the Channel Tunnel Rail Link, for it marked the setting of a new British rail speed record along the route's ''Section 1'' (Fawkham Junction to the Chunnel portal). Class 373 ''Regional'' half sets Nos. 3313/3314 achieved a top speed of 208 MPH, and the occasion marked the beginning of a decided reduction in journey time. Twenty minutes was slashed from the duration of Waterloo to Paris and Brussels services. The French capital could now be reached in 2 hours 35 minutes, and one could be in Brussels within 2 hours 20 minutes. The accelerated international services commenced on 28th September 2003. The last piece of the jigsaw puzzle, ''Section 2'', laid between St Pancras and Southfleet (Junction), and the construction of this route had begun three years later than that of Section 1. In the interim, Eurostar services would continue to be routed via Bromley South on the ''Chatham'' main line, but rather than branching off for the Tonbridge route at Bickley Junction, international trains would be sent onwards through St Mary Cray and Swanley, to eventually meet Fawkham Junction, about three fifths of a mile west of Longfield. Here, a 3½-mile long line, electrified for most of its extent by overhead catenary, connected with Section 1, albeit by means of a somewhat roundabout route. However, Eurostar's record run on 4th September 2007 marked the beginning of the end for this interesting arrangement. The opening of the 24-mile long Section 2 of the CTRL will reduce journey times by a further twenty minutes, permitting a St Pancras to Gare du Nord service of 2 hours 15 minutes duration, and a two hour-long Brussels service. The record-run formation departed Gare du Nord at 10:43 Paris time (or, 09:43 British Standard Time), completing the journey in 2 hours, 3 minutes, 39 seconds. This was achieved by running at speeds above the maximum operating limit planned for standard service trains (186 MPH), the formation reaching 195 MPH on British soil. The existing Waterloo to Gare du Nord journey distance, via Herne Hill, Fawkham Junction, and Ashford International, is 307.8 miles; the transferring of services to St Pancras will result in a marginally reduced mileage of 305.7. 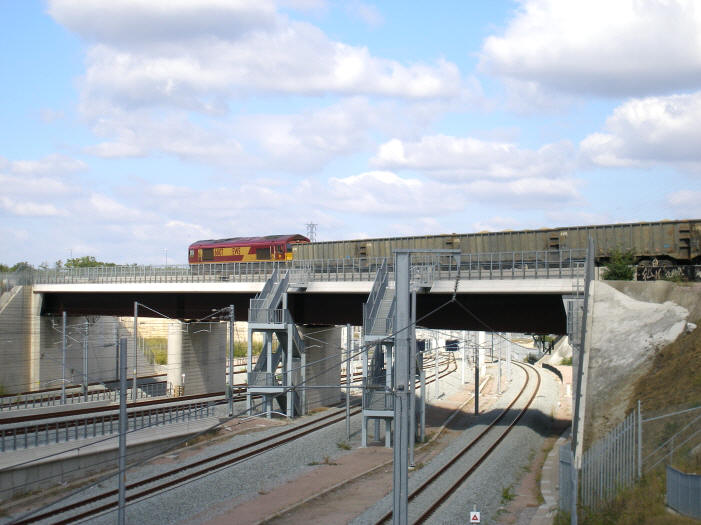 Before the Trans Manche Super Train emerged, a trio of freights rumbled across the North Kent Line's 9000-tonne bridge. One of these featured Class 66 No. 66107 hauling wagons loaded with dredged gravel. The train had originated from Cliffe Gravel Works, on the Hoo Peninsula, and was bound for Crawley. © David Glasspool 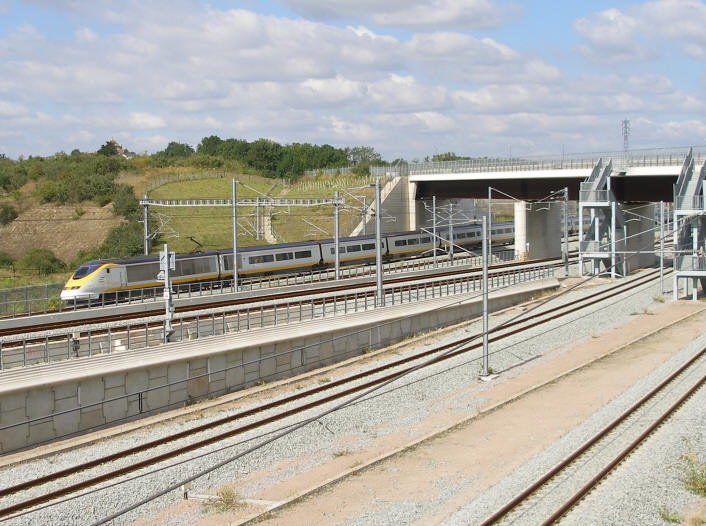 The Gare du Nord to St Pancras ''Record Run'' trip is seen passing under the North Kent Line at Ebbsfleet at 11:36, being on the verge of plunging into the Thames Tunnels. The formation used the Ebbsfleet station avoiding line, which is distinctly separate from the platform tracks. Despite the running of this excursion, Class 373 formations on driver training runs continued to use the tracks in the foreground during the same morning. © David Glasspool