The LC&DR was the first company to run trains to the Sevenoaks district, when an independent concern known as the ''Sevenoaks Railway'' opened a nine-mile long branch line between Swanley and the area. The line commenced operation on 2nd June 1862, but terminated on the very outskirts of the market town at ''Sevenoaks Bat & Ball'' station. This was forced upon the railway company by local landowners who did not wish for the route to run through or near their land. Previously, on 22nd July 1861, the LC&DR had also reached Dover after an extension of their Victoria to Canterbury East line, which completed a shorter route between the capital and the English Channel port over the SER’s circuitous line via Redhill. Naturally, this put the latter at a distinct disadvantage – action had to be taken. If the SER had been given any input in the matter, then the company would not have originally chosen a course via Redhill. Unfortunately, however, Parliament decreed that only one railway line should enter London from the south, thus an extension of the existing London & Croydon Railway’s metals was the only answer. The advent of the LC&DR’s Dover trunk line altered this specification, and on 30th June 1862, the SER finally received Royal Assent to level the playing field: the company’s London to Dover route would be shortened in length by 12½ miles by the installation of a ‘’cut-off’’ line between St Johns and Tonbridge, avoiding the Redhill detour.

Chislehurst was reached on 1st July 1865, this station remaining a terminus until the line was opened to passenger services through to Sevenoaks on 2nd March 1868. The whole stretch to Tonbridge came into use for passenger working on 1st May 1868, although freight had been using the line since February of that year. The line was a difficult one to build, requiring extensive earthworks to tackle the hilly landscape. As a result, the line features steep gradients, deep cuttings, and a 3454-yard long tunnel, just to the south of Sevenoaks' platforms. A steady upward gradient from St Johns to Knockholt (approximately six miles north of Sevenoaks) is in evidence, thereafter the railway running within a chalk cutting for the next three miles. Before reaching Sevenoaks, trains plunge into Polhill Tunnel, 2610 yards in length and the second of three on the hilly route.

Sevenoaks Tubs Hill was the largest station on the cut-off line from the outset, comprising no less than four through tracks and eight platform faces. The latter were arranged in the form of two islands, two side platforms, and a pair of bays. The most eastern and most western through lines were each served by two platform faces, allowing trains to be accessed from either side. Both ‘’up’’ and ‘’down’’ sides were host to a bay platform, these being southward facing, and that on the ‘’down’’ side had the added interest of incorporating a turntable at its end, complete with a run-a-round loop. A large station this may have been, its importance was certainly not reflected in the architecture employed. By this time, the SER’s widespread ‘’economical’’ policy to station construction had come into force, which saw major structures fabricated out of wood. Although nowhere near as grand as the SER’s earlier brick-built efforts, the clapboard affairs did have their own charm. Elongated versions of the main building still in evidence at Hildenborough, were erected on both ‘’up’’ and ‘’down’’ side platforms, complete with canopies demonstrating an intricate ‘’icicle’’ patterned valance. A track foot crossing between platform surfaces was in use from the outset – a footbridge did not transpire until twenty years later. When it did, the lengthy structure resided to the north of the station structures. Although of lattice construction, it was not to the same design as the attractive example which later appeared at Gravesend Central, it instead being plain to the point of ugliness!

Beyond the road bridge (which carried ‘’Tubs Hill’’) at the northern end of the platforms, the LC&DR made a double-track connection from Bat & Ball station, this coming into use on 1st August 1869. It was around this junction that the SER decided to open its goods facilities. On the ‘’up’’ side of the double-track to Orpington was located a goods yard consisting of a trio of northward facing sidings. Two of these were flanked on either side by coal stacks, whilst a third intercepted a single-track goods shed. The economy measures taken to fabricate the main station structures have already been touched upon, but it appears that the SER felt that such an approach was required even for the goods shed. A through affair, the structure looked like a cross between an enlarged Anderson shelter and a barn, having double doors either side to match the description of the latter, and demonstrating a curved roof and corrugated metal sides as per the former! On the opposite side of the junction, beside the ‘’down’’ line of the Bat & Ball branch, featured a dock platform of two faces, serving a pair of northward-facing sidings used by cattle trains. The whole station layout had been signalled by Saxby & Farmer, and a gabled signal box of this company appeared in the apex of the junction with the Bat & Ball line, and another to the south of the ‘’up’’ side bay line. It was behind the southern cabin that two water tanks were present, the largest of which was supported on a rectangular brick base, the other resting on cast-iron stilts. 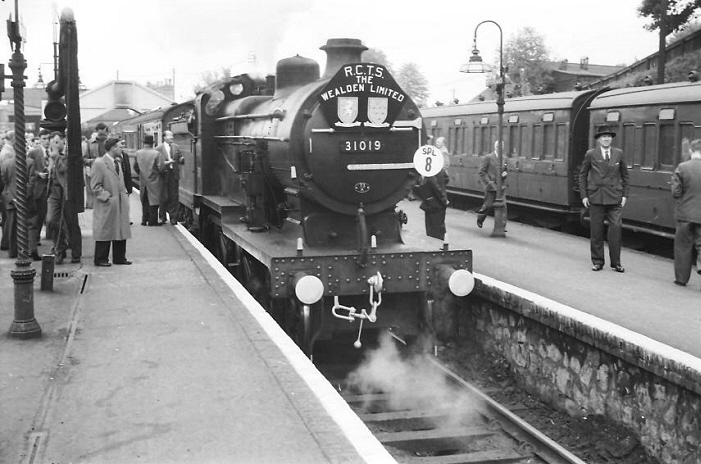 On 14th August 1955, Stewarts Lane-based E1 Class No. 31019 is observed at the head of a rail tour in the single line on the ''down'' side at Tubs Hill, which was served on either side by a platform face. The rail tour, named ''The Wealden Limited'', was organised by the R.C.T.S (Rail Correspondence & Travel Society). No. 31019 had brought the train down from London Victoria via Nunhead, Lewisham, and Beckenham Junction. The rail tour, which used seven different locomotives, traversed both the Hawkhurst branch and the line via Horsted Keynes (now part of the preserved ''Bluebell Railway''), before returning again to London Victoria, this time via the Central Division lines through New Cross Gate. Blood and custard Maunsell-designed carriages were used, to allow the train to reach Hastings via the restricted loading gauge line through Tunbridge Wells Central. In the background of the above picture can be seen the peculiar single-span prefabricated concrete footbridge, which had been erected in that year. It is also worth noting that the platform face here is of stone constitution, rather than brick, and the rolling stock on the right is of SE&CR origin. © David Glasspool Collection 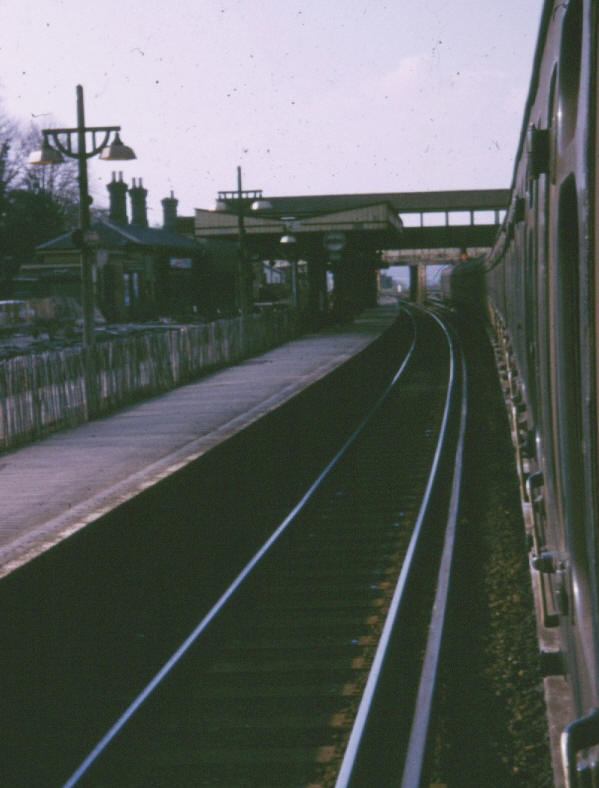 Clive Standen has kindly submitted three images depicting Sevenoaks in May 1975, just after

sections of the station had been fenced off prior to demolition. On the left can clearly be seen the ex-SER ''up'' side clapboard station building, complete with all chimney stacks. Sandwiched in-between this structure and the V-shaped platform canopy is one of the single-tracks served by two platform faces. Beyond the canopy can be seen the roofed SR footbridge of 1935 origin, and in the foreground are Southern Region double-bracket prefabricated concrete lampposts. © Clive Standen 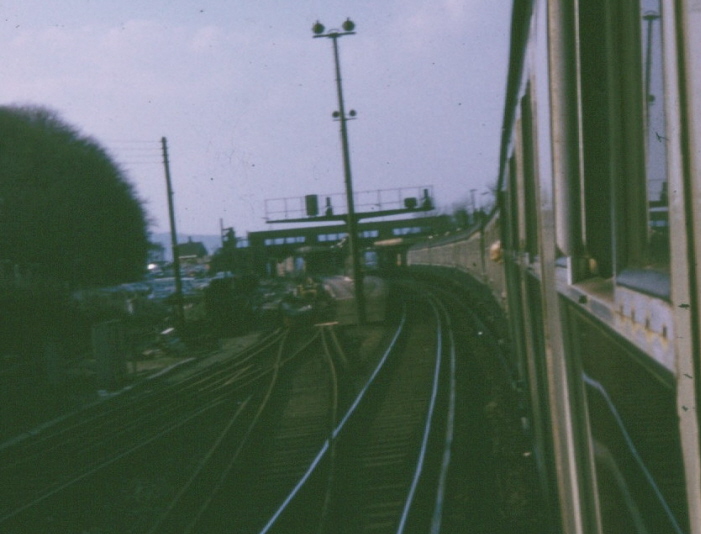 A northward view taken from a departing train in May 1975 reveals the now disused single-track being torn up between platform faces 1 and 2, whilst in the background can be seen the full extent of the covered footbridge. © Clive Standen 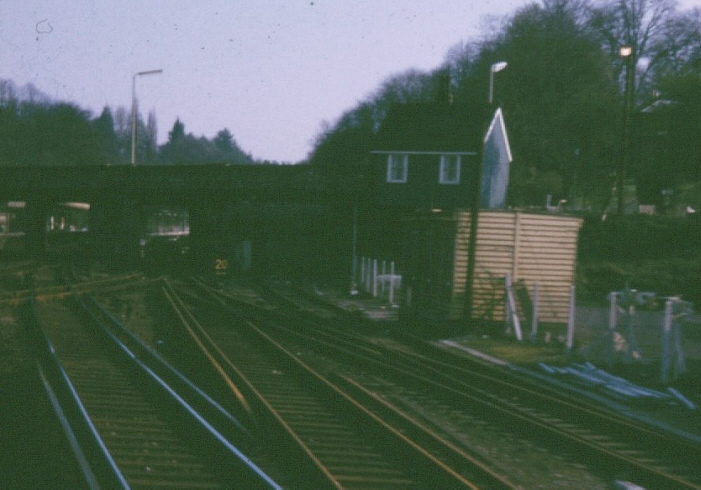 This southward view from May 1975, towards the road bridge (of which the station is beyond), reveals lines curving off sharply to the left for the Bat & Ball line. The rusty rails in the foreground form the single-track which once served platforms 1 and 2, these having now been closed. © Clive Standen