The station opened with the Canterbury (East) to Dover section of the ‘’Chatham’’ main line on 22nd July 1861, the hamlet of Sheperdswell being high up in the North Downs. The layout here, known as ''Shepherds Well'' from the outset, was instantly recognisable as being typical of the LC&DR. Two platforms were positioned immediately to the north of the 2369 yard-long Lydden Tunnel, the ‘’down’’ surface being host to the main station building. This was a variation of the LC&DR's standard architecture for intermediate stops. Quite often with such stations, it was simply a case of rotating the Station Master's house to be perpendicular or parallel with the running lines, which could give stations, fundamentally constituted of the same modular parts, deceptively altered appearances. When comparing the building at Shepherds Well with that at Adisham, it becomes clear that the dimensions of the former Station Masters' houses are fairly similar; the buildings have merely been rotated by ninety degrees. The ‘’up’’ side was graced with a timber waiting shelter, arguably of equal modesty and charm to the station building, but even this appears to have followed a standardised design. A virtually identical example can be found just down the line at Adisham, and an enlarged version at Sole Street. For many years the platforms were linked by a track foot crossing, the railway company being unable to afford the provision of footbridges at all stations. A lattice structure did not appear until midway through the SE&CR’s reign and this was not before the platform heightening around the turn of the century. With reference to the latter, stations were originally built with low platforms to accommodate the smaller stock of the time, but as train heights increased, so did the platforms. Thus now, Shepherds Well and most other similarly designed LC&DR intermediate stations have platform faces which slope downwards from the track-side edge. The outer edges of the platforms were not similarly heightened, hence the slope.

The layout here was for years a hive of activity in terms of goods traffic, but this was not a feature from the earliest days. The freight facilities initially provided were fairly standard for a station of its size: a single-track goods shed of brown-brick construction, fronted by a wagon turntable, was positioned immediately to the north of the ‘’down’’ platform. This was in the company of a trio of sidings, some of which were used as headshunts to gain access to the building, which lacked a direct connection to the running lines. The ‘’up’’ side was not without additional storage capacity and a single northward-facing siding terminated halfway down the platform. The lines here were controlled by a LC&DR-designed signal box positioned to the north of the ‘’up’’ platform, this coming into use about two decades after the through route itself.

Goods traffic in the vicinity was to become more significant with the securing of a Light Railway Order in 1911, subsequently seeing the formation of the ‘’East Kent (Light) Railway’’. Before continuing, it is worth noting that the domestic goods yard of the station was not to experience a sudden boom in goods handled, but instead a dedicated freight line was to be built, which trailed off to the north of it. The creation of the EKR was in response to the discovery of coal deposits deep below the plentiful chalk of the area, and such commercial interest provided the required capital to fund the building of a dedicated freight line to serve the then newly bored-out pits. During the latter part of 1911, construction of the 10¼ mile long light railway steadily progressed under the leadership of Holman (later ‘’Colonel’’) Stephens; the same man also engineered the Kent & East Sussex and Sheppey Light Railways. Throughout 1912, sections of the EKR were gradually opened as track laying was completed, several pits being bored out along the route and a junction being provided for diverging lines at Eastry. Used exclusively for the conveyance of coal in the initial years, the light railway opened to passenger traffic and public goods trains on 16th October 1916. Interchange sidings were built alongside the SE&CR main line, Shepherds Well subsequently becoming the most important station on the route between Canterbury and Dover.

Over ensuing years, many of the coal pits along the EKR became unprofitable and business began to collapse - Colonel Stephens' other ventures in Tenterden and on Sheppey were also loss making. Although not included within the Grouping of 1923, the EKR was absorbed as part of the 1948 Nationalisation, marking the beginning of a steady decline. Passenger operation over the branch ended fairly swiftly, the last train running on 30th October 1948; unsuccessful pits were also closed. Just over a decade later, only four coal boring operations along the EKR remained intact: Snowdown, Betteshanger, Tilmanstone and Chislet. The last to survive was Tilmanstone Colliery, this being in constant operation until the Coal Miner's Strike of 1984, when traffic temporarily stopped. Despite this, the line continued to be used by coal traffic until this permanently ceased in 1986, the line's official closure occurring the following year. From 1989 onwards, a group of dedicated enthusiasts, who had formed the aptly named ''East Kent Railway'' in 1985, embarked on restoring part of the original line to operate ''preserved'' passenger services. After an arduous restoration effort, the organisation was granted a Light Railway Order, just like the line had originally been in 1911, and the restored section of line was cleared for trains to run once again. It is worthy to note that the original passenger terminus of the Colonel Stephens line was opened as one word: Shepherdswell. Today's preserved line is operational as far as Eythorne.

Now returning to the main line station. In connection with the ‘’Chatham’’ line electrification of 1959, those interchange sidings on the ‘’down’’ side, originally laid by the SE&CR, received overhead wires for the dual-voltage Class 71 (Type HA) electrics. Also pioneered at yards such as Plumstead and Hoo Junction, this somewhat non-standard electrical system lasted barely fifteen years, it becoming obsolete with the deployment of Class 73 Electro-diesels. Shepherd Well station’s domestic goods yard closed to traffic on 10th June 1963 and the shed became one of the unlucky examples which later faced partial demolition. The station building did not totally escape the bulldozers, and the single-storey pitched roof section at its southern most end (still evident at Adisham), was also razed to the ground. 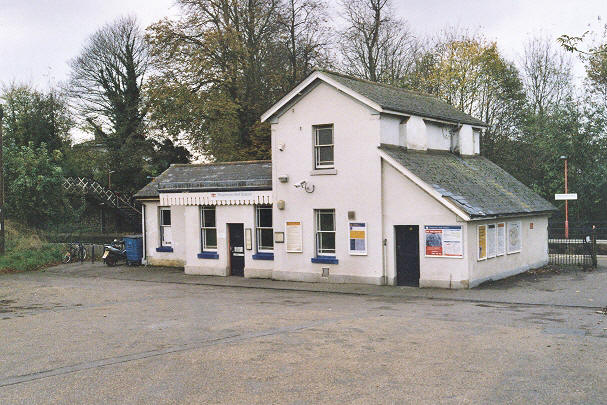 use. This is one of quite a few typical LC&DR structures still standing, other notable examples

being at Sole Street and Farningham Road. When initially constructed, these buildings presented

a golden all-brick appearance, but in the British Railways era, many received this 'pasted over'

effect. Whilst this may not be as attractive as the original scheme, at least this important building 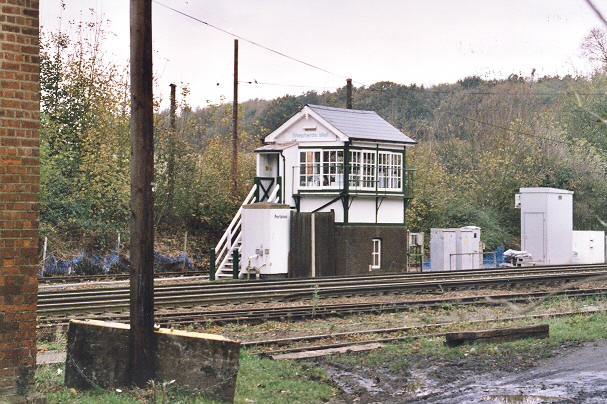 Immediately to the north of the station is the charming signal box, still in use, seen on 3rd November

2004. Dating from 1878 and being of typical LC&DR design, the signal box lost much operational

panel in Dover. Thereafter, it served the Tilmanstone Colliery branch, until this itself closed in 1986,

partly a resultant of the the Coal Miner's strike in 1984. The associated sidings still exist, although

now somewhat derelict, and the signal box controls these and the physical connection with the former

Colliery branch, now the East Kent Railway. There are also a number of semaphores remaining in the 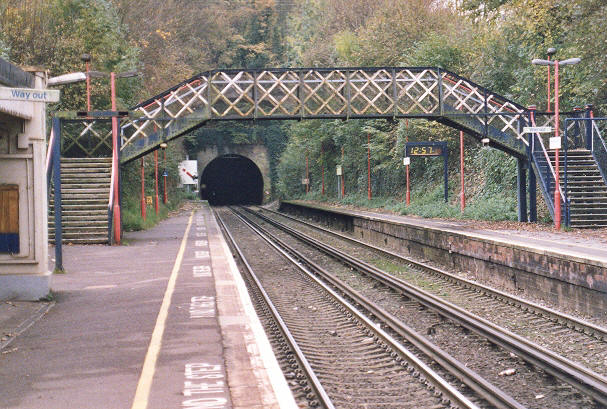 the clock! The ominous-looking 2369 yard-long Lydden Tunnel can be seen at the end of the

platforms, whilst to the left of its entrance can be seen the station's only surviving semaphore

signal, a single post arrangement controlled by the aforementioned signal box. Footbridges at