On 25th January 1858 the ''East Kent Railway'' had its first operational section of line between Faversham and Chatham. Beyond the latter, a horse and carriage service operated to the SER's strood. On 29th March 1858 the company extended over the Medway and began running trains into the SER's Strood station, and subsequently applied for running powers over the North Kent Line to reach the lines of the West End of London & Crystal Palace Railway (WEL&CPR). This would afford access to the West End. The SER countered the proposals with the argument that the North Kent Line was already running at full capacity, which in turn resulted in the East Kent acquiring powers for an independent route to the capital.

The western section of what became the LC&DR's trunk line to Dover was not actually built by this company, but instead by a small number of independent concerns. The first on the scene was the aforementioned WEL&CPR, which had built a line between Wandsworth and Crystal Palace via Balham in 1856 - an eastward extension of this line to Shortlands occurred on 3rd May 1858. The line was double-track from the outset, with two platform faces being provided at Shortlands, linked by a track-level crossing. The station was opened as a terminus, but in this capacity it only lasted for two months, a further extension to Bickley occurring on 5th July 1858. Meanwhile, a westward extension from Wandsworth to Battersea Pier was made on 29th May of the same year, followed in 1859 by a connection with the ''Victoria Station & Pimlico Railway Company'', which had built terminal facilities at Victoria and had met the WEL&CPR's lines by means of Grosvenor Bridge. The aforementioned line between Shortlands and Bickley had been built by another independent organisation - namely the ''Crays Company'' - and the LC&DR (so named from 1st August 1859) met this line with its own extension from Strood in 1860, through running to Victoria commencing on 3rd December of that year.

Shortlands was located upon an embankment and from the outset, no additional facilities other than two platform faces and small station buildings were provided. The diminutive station was to undergo total transformation, however, with the LC&DR's quadrupling of the route from Shortlands Junction to as far as Bromley (South). Note should be made to the fact that the LC&DR now ran via Herne Hill and not Crystal Palace, the London Brighton & South Coast Railway having absorbed the WEL&CPR in 1860. This had instigated the LC&DR to build an independent route to Victoria in order to avoid LB&SCR tolls; the alternative line fully opened on 1st July 1863. Quadrupling was completed for the first trains to run on the new tracks from 1st May 1894 - Shortlands was now unrecognisable from its previous guise. The station was substantial, now boasting two large island platforms protected by copious pitched-roof canopies, linked by a subway. Brick-built waiting facilities were in evidence on the platforms, underneath the canopies, but the nature of the layout here necessitated that main station building to be separate from these structures. A symmetrical building of two pitches and two storeys high (but of only a single floor), was positioned perpendicular to the elevated rails on the ''up'' side. A Station Master's house was also built opposite the main building, separated from the latter by its own garden and the station approach road. Despite the luxuries for the Station Master, goods facilities were still not provided at the rebuilt station, these instead being more common at intermediate stations further down the line. Lastly, a signal box was installed on the ''up'' side at track level, to the east of the islands.

The first station changes began to emerge under Southern Railway ownership. A somewhat early casualty was the signal box, this being decommissioned on 20th December 1925 in connection with the company's electrification of the ex-SE&CR suburban railway network. Circa the same period, the valances of the station canopies were also subtly changed to a slightly different design, although the lower ''spikes'' remained the same triangular pattern. Much simplification of these canopies seems to have been done later, during the route upgrading for the Kent Coast Electrification throughout the late 1950s. The valance ends were simply replaced with grey corrugated metal, and the side lengths had their ornate ''spike'' pattern truncated, leaving a straight edge. It was in about 1970 that the Station Master's house and garden succumbed, which allowed an expansion of the car parking area around the front of the station building. The street entrance of the station building had also seen a canopy alteration: originally its valance reflected the ''clover'' pattern usually associated with the SER (and still extant at Paddock Wood), but around 1954, this was replaced by a much plainer type - at least it did not sit uncomfortably incongruous with the building. Thankfully, all other major structures at this station remain intact, including all platform buildings and canopy framework. It would certainly be nice to see the restoration of the latter's valances. 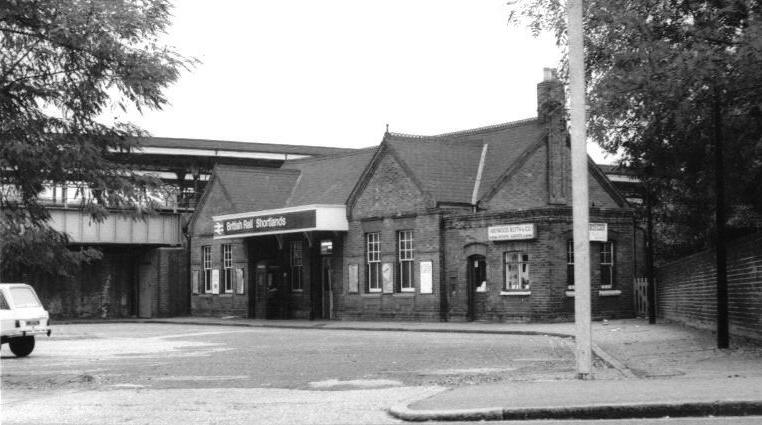 This classic 1970s view of the station reveals the main symmetrical station building and the elevated platforms. Note the

''Arrows of Indecision'' logo was officially launched as BR's trademark on 1st January 1965, it was not until the turn of the

decade that it began featuring in a large way on infrastructure. The estate car on the left marks the position of the former

Station Master's house and garden. The demolition of this site also saw the removal of the cobbled approach. Tom Burnham 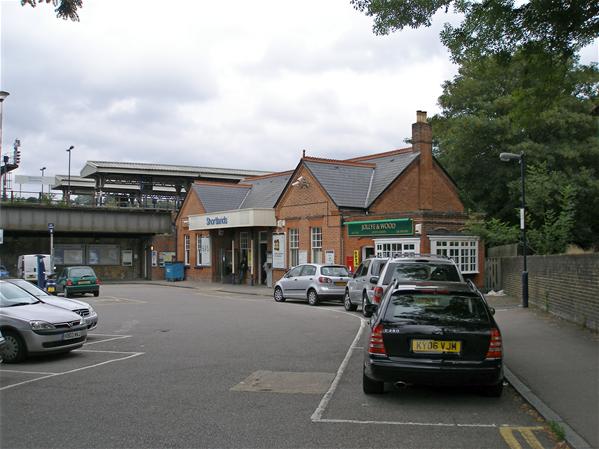 The station building is viewed again, but this time much more recently, on 25th July 2007. Worthy

of note is the fact that although the platform offices are of crème brick construction, this station 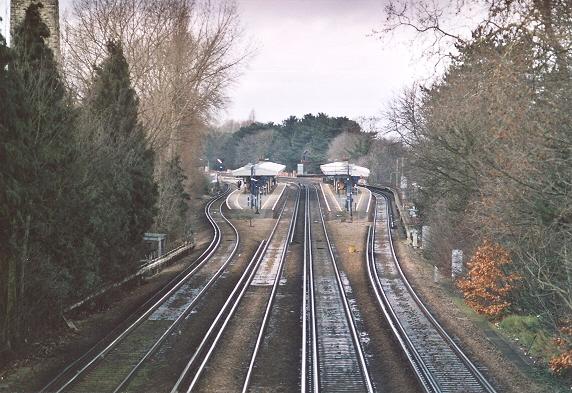 and the distinct lack of points here. The ''up'' and ''down'' slow lines are kinked to serve the outer

edges of the islands. The station building is out of view, situated to the left at street level, below