The Dartford Loop Line opened on 1st September 1866, but Sidcup, now the principle station on the route, did not come into use until the following month. Of course, the marginally later opening did not alter the nature of the station’s composition, and as would be expected, clapboard was used throughout construction. Single-storey structures based on the ‘’down’’ side building at nearby Bexley appeared on both ‘’up’’ and ‘’down’’ platforms at Sidcup, albeit being slightly shorter than the example at the former. A flat-roofed canopy, customary on the route, extended from the front of each building, demonstrating a seemingly economical and hastily designed simple valance. This plainness was later rectified, if only in part, by the partial rebuilding of the ‘’up’’ side offices in 1887. This provided a canopy with markedly superior styling, a semi-circular cross-section (see Paddock Wood) having appeared, this itself demonstrating an intricate valance (see Plumstead). The ‘’down’’ side remained unaltered during these works, thus retained the earlier-conceived flat-roof canopy design. The Station Master was indeed well catered for, his residence being located beyond the eastern end of the ‘’up’’ platform and comprising a two-storey brick-built house.

The goods yard was positioned on the ‘’down’’ side, to the east of the station buildings, stretching for a length of 220 yards beside the running lines. Just three sidings occupied the space (no goods shed was present), these serving locally-grown produce in the station’s earliest years. Naturally, coal became an increasingly important commodity handled here, as agricultural land was sold off for housing development. Controlling this layout was a signal box erected by the contractor ''Railway Signalling Company'', positioned opposite the yard, on the ‘’up’’ side. This opened about a quarter of a century after the line, at a time when the SER was relying much more on contractors to complete signalling work.

Fifty years after the 1887 ‘’up’’ side alterations by the SER, the Southern Railway decided to partially rebuild the station. Fundamentally, this merely resulted in the removal of both SER canopies from the clapboard buildings, their replacements coming in the form of the then prevalent ‘’V’’ shaped design of the SR. Similar designs had appeared during the same decade at Tonbridge, Swanley, and Sevenoaks Tubs Hill. Sidcup’s then new canopies were structurally separate from the earlier SER buildings, not relying on the clapboard for support. Replacement of platform gas lamps had coincided with the electrification programme, but despite the station’s relative importance on the route, it was still without a footbridge. Such a feature would not come before platform lengthening: this occurred during the Spring of 1955, in connection with ten-car electric formations being deployed. Prefabricated concrete, manufactured at Exmouth Junction, appeared at the eastern ends of the platforms, and the first scheduled ten-car EPB formations ran along the Dartford Loop Line on 13th June 1955. Concurrent with this was the change of platform lamp design yet again; concrete bracket posts arrived in force, these supporting electric lighting. During the platform lengthening, New Eltham lost its signal box, this of which was fouling the western extension of the ‘’down’ platform. Consequently, its demolition in 1955 resulted in Sidcup’s signal cabin receiving an electrical connection with New Eltham’s goods yard, it releasing the sidings until the yard closed in May 1963. The following decade brought further change; passenger facilities were given a decided boost with the erection of a footbridge in 1965, immediately to the east of the platform canopies. This was built to a similar design as the example which had appeared at Crayford some four decades earlier. The westward view from the station also saw a significant change during this period: in 1966, sixteen storeys worth of offices had appeared on the skyline in the form of ‘’Marlowe House’’. In August of that year, the goods yard was closed, but the ‘’permanent way’’ was to see a further addition in 1967. £50,000 had been allocated for the laying of an electrified loop on the ‘’down’’ side, to the east of the platforms - the closure of the goods yard had vacated land for this. The loop would allow greater flexibility for terminating services, which could now avoid blocking one of the running lines. Thus, the station acquired another semaphore signal arm to control access to the then new siding. Sadly, the then new semaphore’s existence was brief, for the commissioning of the Dartford Panel occurred on 1st November 1970, colour lights subsequently coming into use. This date also marks the decommissioning of Sidcup’s signal cabin.

Of the Dartford Loop Line, Crayford and Hither Green lost their original clapboard structures in 1968 and 1972 respectively, but the other stations of SER origin retained their early buildings. However, a new cull of the clapboard came in the late 1980s, when modernisation of a number of stations along the route, began. In 1987, demolition of the ‘’up’’ side SER building at Sidcup began. It was replaced by a brown-brick structure comprising a glazed pitched-roof and sliding doors, this of which opened on 24th November of the following year. The ‘’down’’ side SER structure was in existence until 1991, but the pair of SR canopies managed to survive the rebuilding. A single glazed bus shelter appeared on the ‘’down’’ platform at this time. 1992 brought further modifications – in this year, the platforms were again extended at their eastern ends with prefabricated concrete, in anticipation of twelve vehicle formations (which later did not transpire). In more recent years, the station has witnessed yet further change, some for the worse. In 2003, the wooden-clad canopy valances were replaced with dreary grey corrugated metal, but at least the original framework was retained. In 2005, an additional bus shelter, of more modern design than those of the Network SouthEast era, appeared on the ‘’up’’ platform. 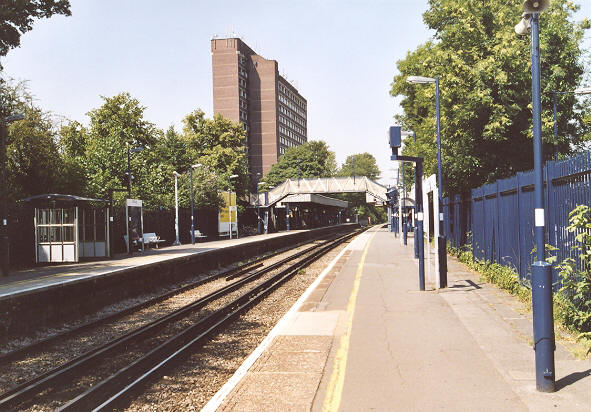 A westward view from 3rd July 2006 reveals the shelter of 2005 on the left, the footbridge of 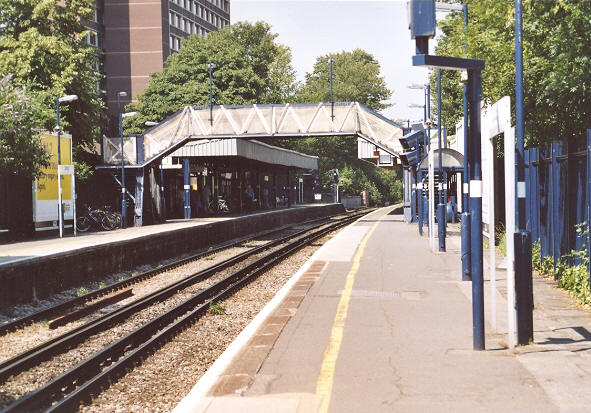 A closer view better reveals the 1965 footbridge, this now in the company of corrugated metal

valances from 2003. On the right can be seen the curved outline of the 1991 bus shelter. Note

the lampposts affixed to the footbridge. David Glasspool