The e320 series formations each have sixteen carriages, double the number of those found in that version of the Velaro "D" introduced by DB. Each e320 can accommodate 902 passengers in a train 398-metres-long, a seating capacity 152 greater than the incumbent Class 373 stock. The extra seating is afforded by longer carriages and the driving trailers also housing passenger accommodation - on the existing Class 373 sets, much valuable space is taken up by traction gear in the power cars and end carriages. To ensure inter-operability across the European high speed rail network, the units are compatible with seven varying signalling systems and are equipped with eight pantographs to take electric current from three different voltages: 1.5 kV DC, 3 kV DC, and 25kV AC. Each train formation is set upon 32 bogies, these comprising two axles, and has a traction effort of 16,000 kW (21,400hp). Of the 64 axles, half are driven, power coming through eight traction converter units. Braking is provided by pneumatic, regenerative, and rheostatic systems on board. The concept of regenerative braking involves the wheels powering the train's electric motors when slowing down, as opposed to the motors powering the wheels. Thus, electricity is generated and returned to the catenary, rather than used.

Like the Class 373 fleet, the e320 series (which has officially been designated "Class 374" as far as British identification goes) is formed of "half sets", which are combined to make a complete train. Thus, an individual Class 374 comprises eight vehicles and is paired with another class member to make a single formation. Italian company "Pininfarina" was contracted to internally design the new e320 units and create a brand new external livery. The firm was also responsible for the same task on the Class 373 fleet, a £100,000,000 overhaul programme having started in late 2012 on the withdrawal of the first unit scheduled to undergo the transformation.

A full-size mock-up of an e320 driving vehicle had been displayed alongside the Albert Memorial, London, in November 2010. On 30th January 2014, the first e320 formation arrived in Britain. This comprised half set Nos. 374007 and 374008, which had completed running-in during the previous year around Siemens' Wildenrath test track. The train was taken to Temple Mills Depot for crew familiarisation and testing; France and Belgium also received a complete set each for training. Eurostar formally unveiled the e320 at St Pancras International on 14th November of the same year and at this time, announced that a further seven units had been added to the original order, bringing the class total to seventeen. Introduction to service had been envisaged for 2014, but delays, mostly attributed to getting type approval through the Chunnel and in those countries the class is intended to run in, pushed this back to the following year.

Previously, in September 2013, Eurostar announced that direct London to Amsterdam services would begin in December 2016. An agreement was signed by the company, the Dutch government, and Dutch passenger operator NS (Nederlandse Spoorwegen), and the new services were being made possible by the development of the e320. The London to Amsterdam journey time was estimated to be about four hours, including stops at Brussels, Antwerpen, Rotterdam, and Schiphol Airport. Through ticketing to Amsterdam Centraal with Eurostar was already possible, although a change at Brussels MIDI was required for the Dutch connection. As an aside, direct services between London and Amsterdam had originally been scheduled to start back in 1995, as part of the "Nightstar" overnight sleeper offering. The start date of those services was pushed back to May 1997, then the project ultimately cancelled in July 1999. 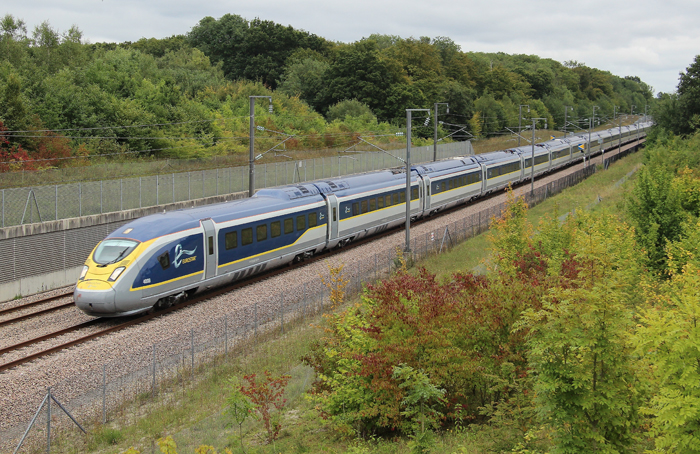 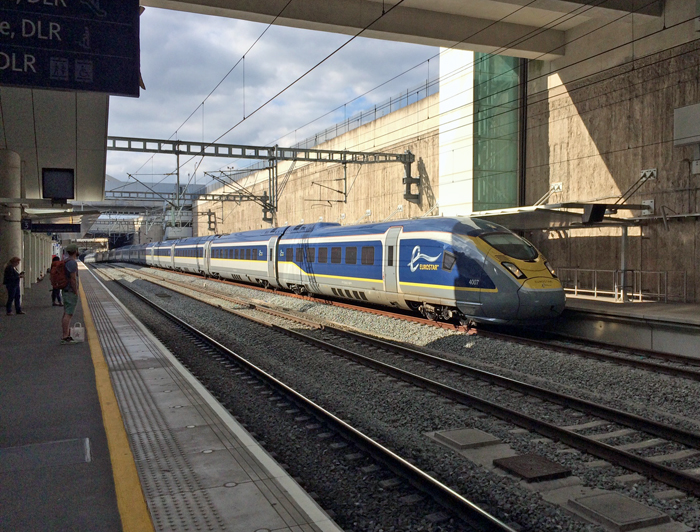 Nos. 374007 and 374008 are again seen, this time passing through Stratford International on an outbound trip. Note the "dip" in the track in the background. In spite of its suffix, this is a station which has never witnessed an international service call. © Scott Woodrow 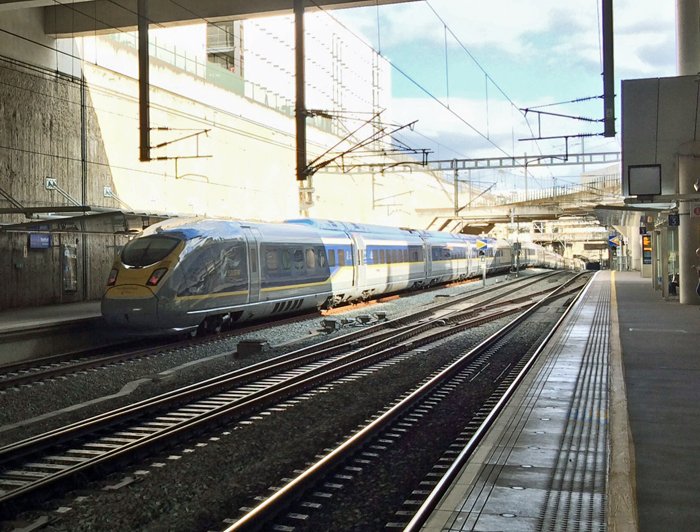 Half set No. 374008 brings up the rear of the 398-metre-long train as it passes under the single-track link to Temple Mills Depot. The steep descent to "London Tunnels East" is apparent. © Scott Woodrow