Today, the quaint and unassuming nature of this station belies its once large presence on the SER lines within the inner suburbs. The once impressive affair opened immediately to the west of the junction between the Tonbridge cut-off route and the original North Kent Line via Woolwich, Blackheath and Lewisham, on 1st June 1873. Three lengthy island platforms were provided on the culmination of no less than six tracks from the eastern direction, which saw the emergence of an identical number of platform faces. Of the three islands, the southern most pair were separated by just a single-track, which allowed passengers to embark / alight a train from either side. Furthermore, the southern most platform face actually served a westward facing bay line: however, this passed beyond the eastern limits of the station, therefore the arrangement could legitimately claim to have a third island. All surfaces were graced with a pleasing canopy, typical of SER design. The structures demonstrated the same curved profile still to be seen at Paddock Wood, but utilised a seemingly more intricate and pointed valance. The latter can still be viewed on the still extant island at St Johns and indeed, over the covered entrances at Folkestone West - Maze Hill was also a recipient of this interesting valance design. All platform surfaces were linked by a covered footbridge, which in turn provided a connection with the ‘’up’’ side embankment, upon which a tongue-and-groove timber ticket office was situated. The footbridge was essentially an elongated version of the example which is still in existence at Maze Hill, whilst the ticket office was virtually identical to that which survives today at Northfleet. Goods facilities were, naturally, not a feature at St Johns, the well-established Bricklayers Arms complex being nearby, but a trio of westward-facing rolling stock sidings were present, located immediately adjacent to the bay line.

During the SE&CR era, the station remained unchanged, but under Southern Railway ownership there were a number of significant alterations. In conjunction with the electrification of the Tonbridge cut-off line to as far as Orpington, and the North Kent Lines in 1926, the southern most of the three islands was abolished, reducing the arrangement to four platform faces. The redundant platform surface remained, but all structures upon it were demolished and the view across to the former bay line and trio of sidings was blocked by the erection of a wooden barricade. Three years later, a then new signal cabin came into use, this being positioned on the ‘’down’’ side, some 60 yards east of the platforms. This, reflecting the attractive lines of older Saxby & Farmer products, replaced a SER-designed cabin formerly situated within the apex of the Orpington and North Kent Lines. Concurrent with this was the opening of St Johns Flyover, on 7th July 1929, which provided Lewisham with a direct link to Nunhead for the benefit of cross-London freights. These would have otherwise held up passenger services beyond St Johns. The link line reused the western part of the LC&DR’s Greenwich Park branch, which formerly crossed over the SER lines at the eastern end of St Johns, subsequently closing in 1917. St Johns Flyover passed over the land once occupied by the aforementioned SER cabin, which explains the latter’s closure and replacement. With the subsequent installation of third rail through to Nunhead, the useful double-track link from Lewisham came into use for passenger services on 30th September 1935. Later on in its existence, the SR also made a peculiar modification to the existing pair of canopies at St Johns: the arched roofs were replaced with triangular pitched equivalents, but the original SER valances were retained.

Under British Rail, the policy of layout degrading was set to continue, but not before an incident involving the flyover. On 4th December 1957, the 16:56 Cannon Street to Ramsgate (via Folkestone) service - eleven carriages long and hauled by a Bulleid Pacific - collided with the rear of the 17:18 Charing Cross to Hayes commuter service. The latter consisted of a ten-vehicle electric formation and, at the time, was stopped at a signal. Fog was prevalent on the day, the express having passed through a red signal, which lead to the collision underneath the flyover. Two metal girders of the flyover were dislodged, subsequently falling onto the express train below and crushing two and a half vehicles. Ninety fatalities were the resultants of this accident and half of the original lattice flyover had to be removed, it being replaced by a span of a wholly alternate design.

This track layout includes labels for the Bexleyheath Line and Hither Green station, both of which came into use in 1895. Click the above for a larger version. Drawn by David Glasspool 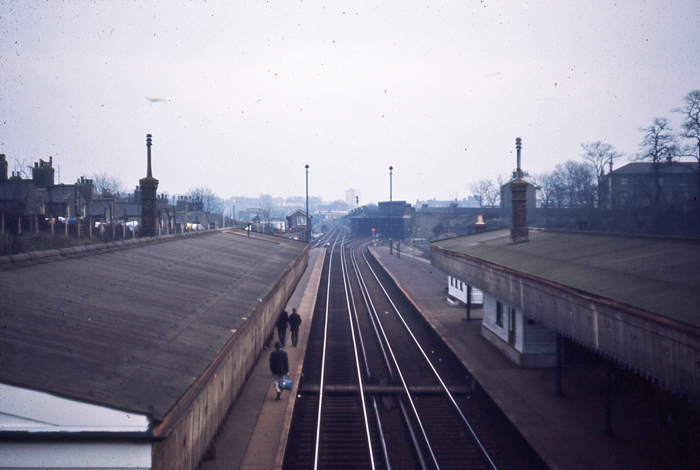 This eastward view towards Lewisham from the old footbridge shows the station when two island platforms were still in use. The canopies retained ornate valances, but these were decidedly grotty by this time. In the background, on the left, can be seen St Johns signal box, which dated from 1929 and was replaced by the huge panel at London Bridge in 1976. Centre background is St Johns Flyover, carrying the line from Nunhead into Lewisham, in its repaired state after the crash of December 1957. Also in the background, just to the right of the flyover, are the buffer stops which mark the end of a former siding which once served the outer face of the third island platform. Note the staff track foot crossing between the platforms. © David Glasspool Collection 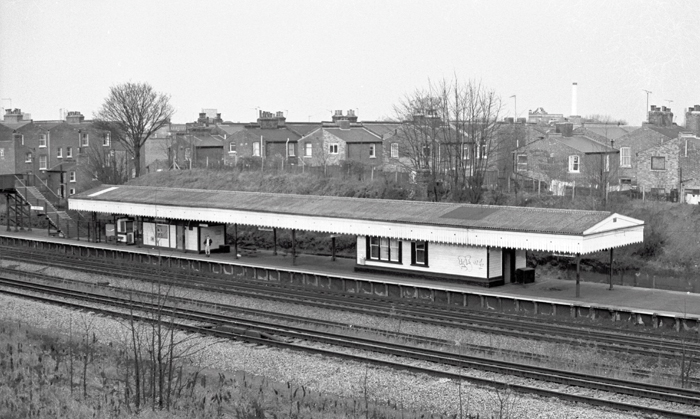 The buildings and canopy on the remaining island platform situated between the "Up" and "Down" Slow Lines, as viewed from Cliff Terrace, with the reversible line climbing from left to right in the foreground. The ticket office and staff facilities were contained in the left-hand building, which replaced the station buildings that were destroyed by fire in the late 1970’s, whilst the older building contained toilets and a waiting room.© David Morgan 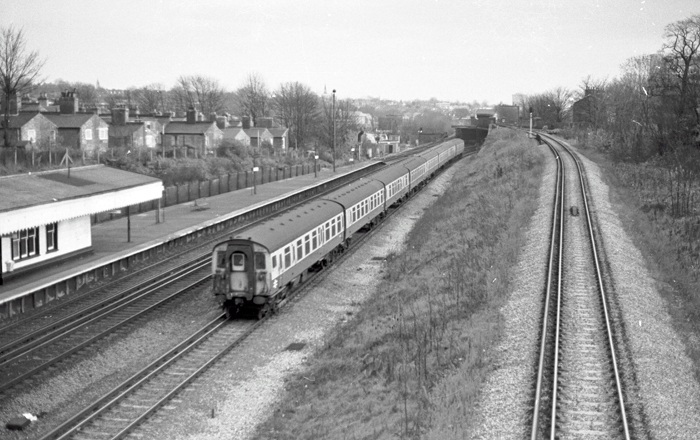 Viewed looking south east from the station footbridge, Class 411, 4-CEP Unit Nos. 1615 and 1616, forming the 11:32 Ramsgate to Charing Cross service, speed along the "Up" Fast Line. To the right is the reversible Line climbing from Tanners Hill Jn towards Lewisham Vale Jn; this was opened in 1976 as part of Operation London Bridge. Visible to the left of the station and beyond the houses in Albyn Road, are a row of trees which stand along a short remaining section of embankment that once supported the LC&DR's Greenwich Park Branch.© David Morgan